The avalanche danger is MODERATE above 1000′. It is possible to trigger an avalanche 2′ deep or deeper on lingering wind slabs that formed during last week’s storm. Approach steep slopes with caution, and avoid terrain that has been recently wind loaded. The most likely places to find unstable snow will be near ridgelines, on convex rolls, and in gullies.

The danger is LOW below 1000′, where a thick crust on the surface will make avalanches unlikely.

Forecaster Chat # 2: Join us virtually this Thursday evening, Feb. 3, for an interview with US Air Force Major Kevin Kelly of the Alaska Rescue Coordination Center. We’ll get his behind-the-scenes perspective of the role AKRCC plays in backcountry search and rescue missions, and try to share some tips on how to help facilitate an effective rescue should something go sideways in the backcountry. Stay tuned for more details and registration info.

Girdwood: Skiers in the Girdwood Valley noted multiple loose snow avalanches that were triggered by rime falling off rocks in the alpine. They turned around when one avalanche released close to the slope they were ascending. Nobody was caught in the avalanche.

Turnagain Pass: A skier triggered an avalanche on peak 4940 on the south end of Seattle Ridge. The skier that triggered the avalanche was not caught in the slide. The avalanche was roughly 2′ deep, 350′ wide and ran 500 vertical feet. It appears the avalanche failed on the interface between new and old snow. The skier was the second person of the group to descend, and initially triggered a smaller avalanche which ran roughly 100′ before propagating wider. More details in this observation. 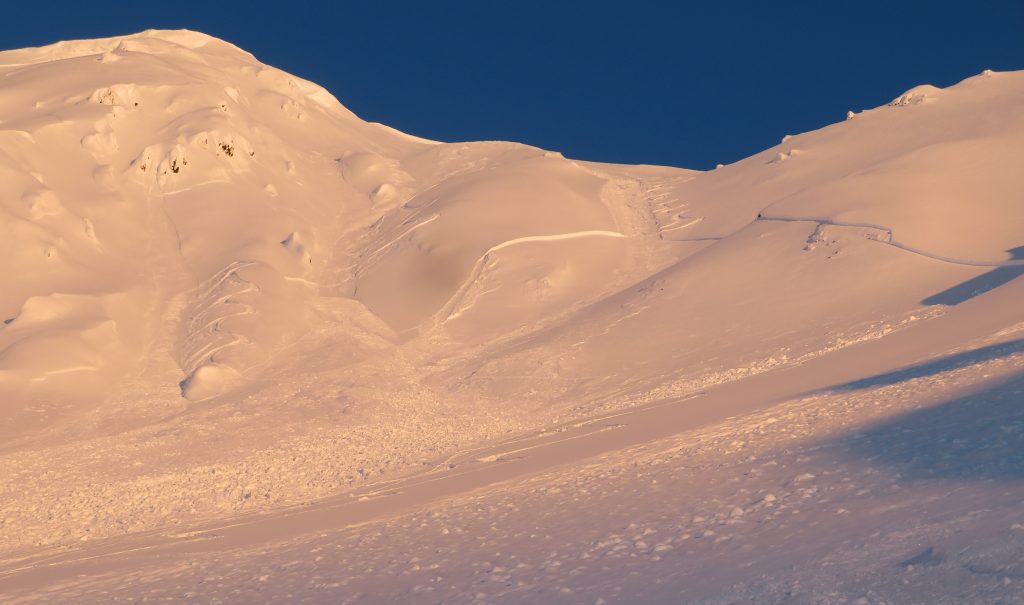 Crown of a skier-triggered avalanche on a W aspect on peak 4940 at the south end of Seattle Ridge. Nobody was caught in the avalanche. Photo: Mike Records. 01.30.2022

Don’t let the calm conditions lull you into complacency- lingering wind slabs remain our primary concern today. The storm from the end of last week is taking longer than usual to heal, as evidenced by the skier-triggered avalanche on peak 4940 yesterday (details), and multiple skier and snowmachine triggered avalanches on Seattle Ridge on Saturday (details). Most, but not all, of this activity seems to be associated with a brittle crust that formed early last week and was covered by low-density stellars (snowflakes). This layer was highly reactive during the middle of the storm, with widespread natural activity Thursday into Friday. It is becoming more stubborn as we move further out from the last storm event, but today it will still be possible to trigger an avalanche 2′ deep or deeper, especially on slopes that were wind loaded during or immediately following the storm.

The limited data we have from snowpits is giving us mixed results. I found propagating (unstable) results at the crown of a mid-storm avalanche on Saturday. Multiple other pits on Tincan, Eddie’s, Pete’s South, and Squirrel Flats did not propagate, which indicates this layer is slowly healing. Today it will be important to weigh the handful of stable pit results (subtle indicators of improving stability) against the flurry of recent human-triggered avalanches (giant blinking red warning signs of instability), and choose your terrain carefully. Avoid traveling on steep, wind-loaded slopes, where you have the highest likelihood of triggering an avalanche. The most problematic terrain will be near ridgelines, below convex rolls, and in gullies. Keep an eye out for red flags like shooting cracks, collapsing, and other fresh avalanche activity. Also, keep in mind that several of these avalanches involved people who were the second or third set of tracks on a slope.

Persistent Slab: It is becoming increasingly difficult to find unstable clues with the facets associated with the New Year’s crust. We suspect there are isolated slopes where this may still be an issue, with the most likely places being steep, unsupported slopes at upper elevations with thinner snow. The last known activity on this weak layer was the skier-triggered avalanche on the north side of Tincan Proper 11 days ago.

Cornices: Cornices have grown large and dangerous. There were multiple cornice failures during last week’s storm, and they will easily fail under the weight of a person. Be sure to give them plenty of space if you are traveling near ridgelines today.

Dry Loose Avalanches: It will be easy to trigger dry loose avalanches (sluffs) in steep terrain that has not been hit by the wind. These are unlikely to bury a person, but they can have serious consequences if they carry you through terrain traps like rocks, trees or cliffs. 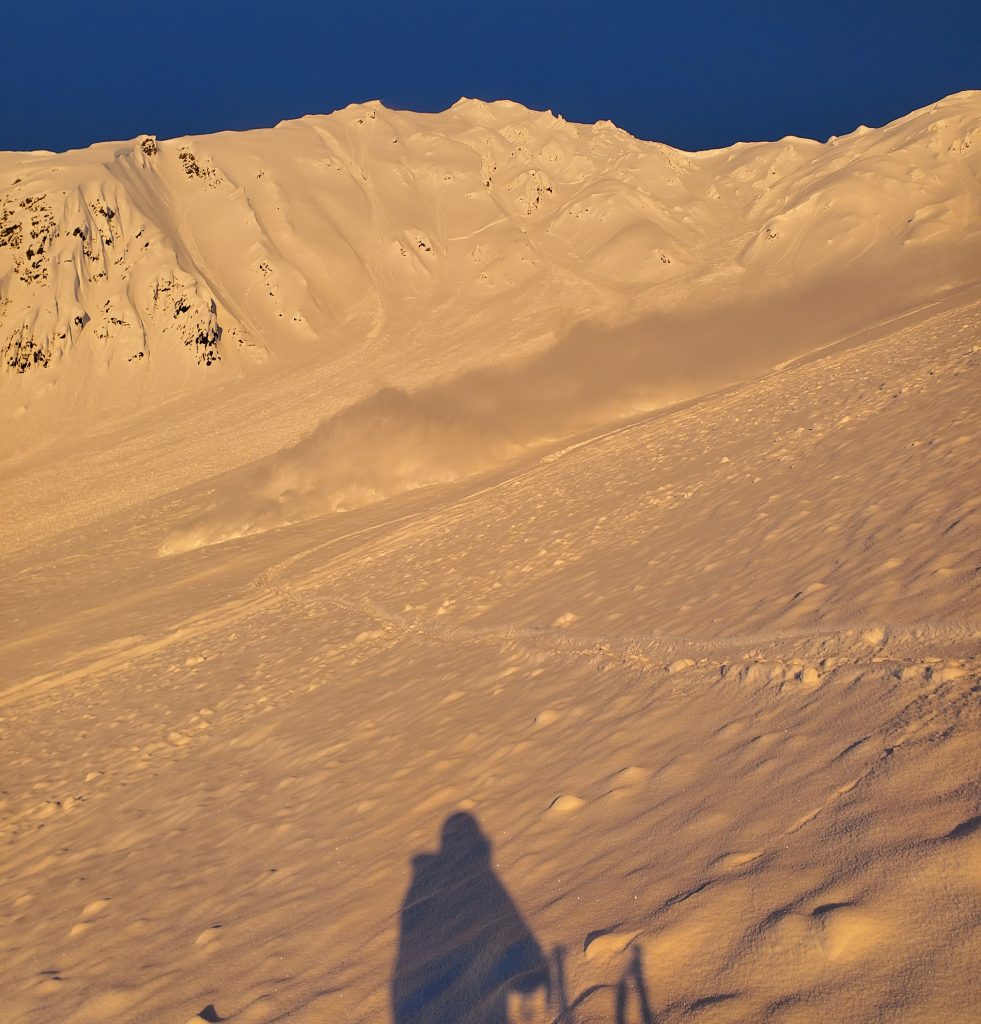 Yesterday: The clouds hung in thicker than expected near Girdwood and Turnagain Pass, and it seems the only people who saw the sun had to put in some work to poke up above the clouds. High temperatures were in the upper teens to low 20’s F, with overnight lows in the mid teens. Winds were calm with light gusts from varying directions. No precipitation was recorded.

Today: A lingering valley fog will be thickest near the Turnagain Arm, but is looking to be a thinner layer than what we saw yesterday. Visibility should improve during the day, with partly cloudy skies breaking up through the day. We are looking at another day of calm to light breezes, out of the northeast near Girdwood and the east/southeast at Turnagain Pass. High temperatures are expected in the upper 20’s F, and no precipitation is expected today.

Tomorrow: Cloud cover will increase tonight, with a chance for 2-4″ snow tomorrow. Easterly winds are expected to ramp up to 15-30 mph with gusts of 30-40 mph during the day. Temperatures are expected to stay in the low 20’s F with snow to sea level.

*No wind data after 6 p.m. yesterday