The avalanche danger is rising to CONSIDERABLE today on all aspects above 1,000′ due to a weather system bringing strong easterly winds. Wind slabs are expected to form through the day and could release naturally. Slabs could build to 1-3 feet thick and should be easy for people to trigger. Watch for blowing snow and avoid being on or under any slope being wind loaded. Natural cornices breaks are also possible and could trigger an avalanche below.

The danger is MODERATE below 1,000′ due to the chance debris from avalanches releasing in higher terrain could run into this zone.

SUMMIT LAKE/LOST LAKE/SEWARD:  Strong ridgetop easterly winds will be impacting these areas as well and increased avalanche danger can be expected.

After a brilliant sunny day yesterday, clouds are moving in with a chance for a few inches of snow and….I hate to say it….but strong easterly winds. By this afternoon forecasts are for 40-50mph with gusts in the 70’s. These winds should have a fairly easy time transporting much of that soft snow covering the slopes. Most of the impact should be above treeline, but also watch for exposed slopes in the trees that could see wind loading as well. With only 2-4″ of snow in the forecast, the winds will be the sole driver increasing the avalanche danger.

For anyone getting out today, paying close attention to what the winds are doing will be key. Watch for where they are blowing and how they are loading slopes. This easterly wind flow is great at loading many westerly aspects, but it also cross-loads the east face of Seattle Ridge (road side). So, all aspects are suspect. Feeling for stiffer snow over softer snow and cracking in the snow around you are also keys you’ve found a wind slab. If the visibility isn’t good enough to see, we should avoid being under or on steep slopes in case a natural avalanche occurs above us. Natural wind slabs are possible today and could be triggered by pieces or cornices breaking off. These new winds slabs could be anywhere from 1-3 feet thick depending on the strength of the winds and how much loose snow there is to blow on the surface. Many areas have over a foot of loose snow available for transport. 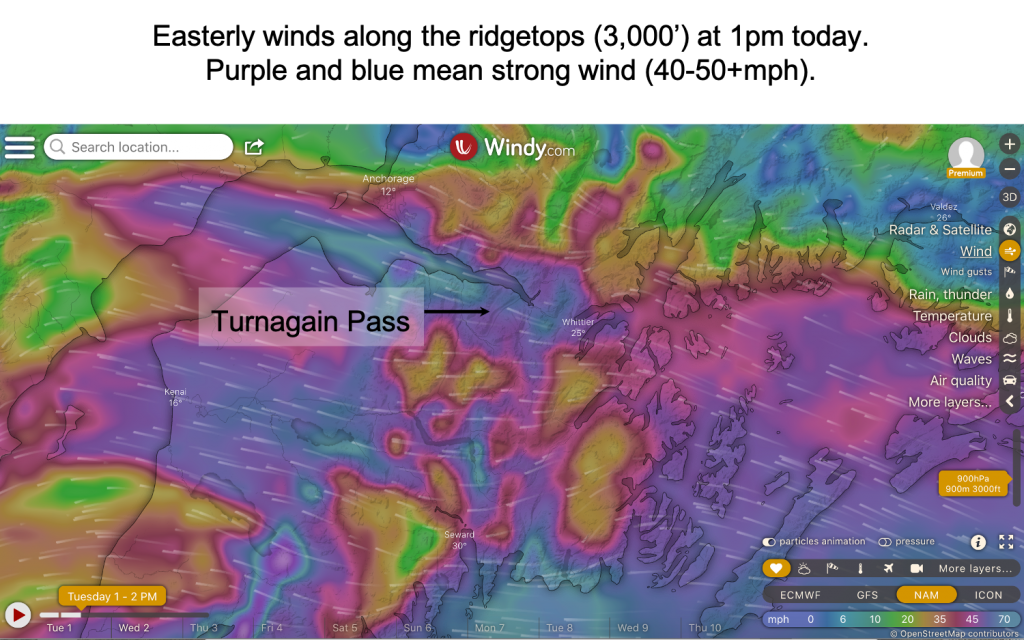 Wind slabs could step-down to the last storm snow interface around 2-3 deep and create a larger avalanche. This is the layer under the snow from the end of last week that is sitting on a thin freezing fog/drizzle crust. See the crown profile below from an avalanche last Saturday/Sunday on Seattle Ridge that failed just above this very thin crust. 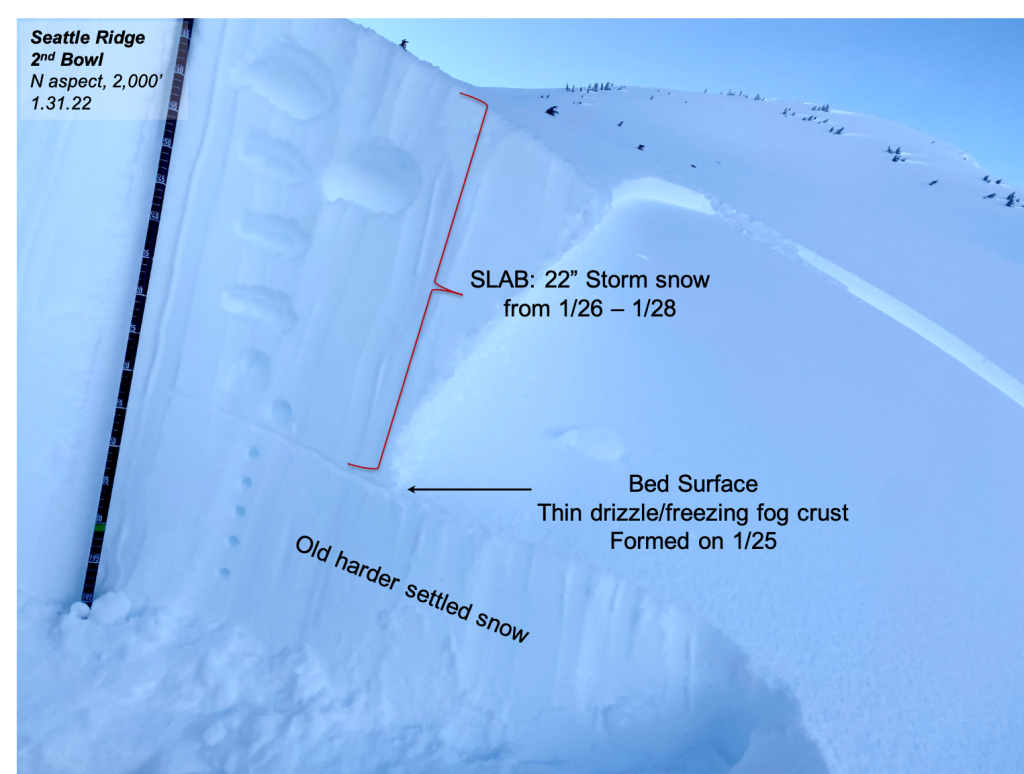 Crown profile in a smaller avalanche triggered on either Saturday or Sunday in 2nd Bowl on the backside of Seattle Ridge. This thin crust is believed to also be the bed surface of the many avalanches that occurred on the back of Seattle Ridge on Saturday.

In shallow areas of the forecast zone, such as south of Turnagain in the Silvertip area and outside the forecast zone in Summit Lake, wind slabs could break in deeper weak layers. These shallow zones have a much different snowpack than Turnagain. Take a look at this report from Summit Lake by two former CNFAIC forecasters, thanks ladies! With weaker layers near the surface, wind loading today may tip the balance, if not, something we are keeping an eye on for the future.

Yesterday:  Sunny skies were over the region with some valley fog along Turnagain Arm. Ridgetop winds were light from the east until around 8pm when the starting climbing with the approaching weather system. Temperatures were in the teens.

Today:  Cloudy skies, light snow and strong easterly winds are forecast. Snow accumulations are 2-4″ for today with 1-3″ possible tonight, snow to sea level. Easterly winds are slated to blow 40-50mph along ridgelines with gusts near 70mph. Temperatures are in the teens in the high elevations and 20’sF near sea level.

Tomorrow:  This quick hitting storm moves out tomorrow morning. The weather models are showing partly cloudy skies (some valley fog) and no precipitation. Ridgetop winds look to be light and variable.