The avalanche danger is CONSIDERABLE above 2500′, where it is likely a person could find a lingering wind slab and trigger an avalanche 2-3′ deep. As skies clear today, it will be important to remember we are less than 48 hours out from a big storm, which means we still need to approach steep slopes with caution.

The danger is MODERATE between 1000′ and 2500′, where it will still be possible to find a lurking reactive wind slab. The danger is LOW below 1000′, where the storm finished with rain and the snow is now capped with a thick crust.

As skies cleared yesterday, we were able to see evidence of a widespread natural cycle that occurred during the 1/27-1/28 storm. This included activity in the Girdwood valley (Magpie and Berg Peak), Turnagain Pass (Tincan Proper/Library, Seattle Ridge, Sunburst, Magnum, Pete’s South, and the Johnson Pass area), and in the paths along the Seward Highway south of Girdwood. These avalanches were averaging around 2′ deep, although some were 4′ deep or deeper. Bigger avalanches were occurring on wind-loaded slopes. There are too many photos to include them all here, but it is definitely worth perusing the observations from yesterday to see some of the action. 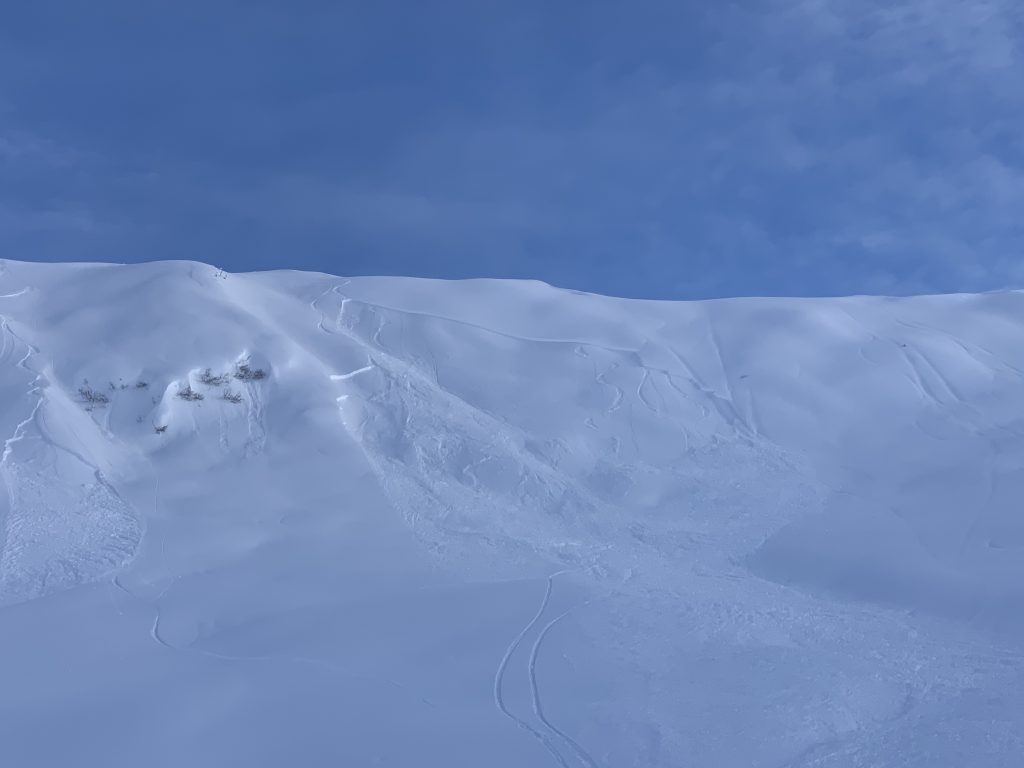 Skier-triggered avalanche on Seattle Ridge’s Widowmaker yesterday. The skier was caught and carried but not buried. Photo submitted anonymously. 01.29.2022 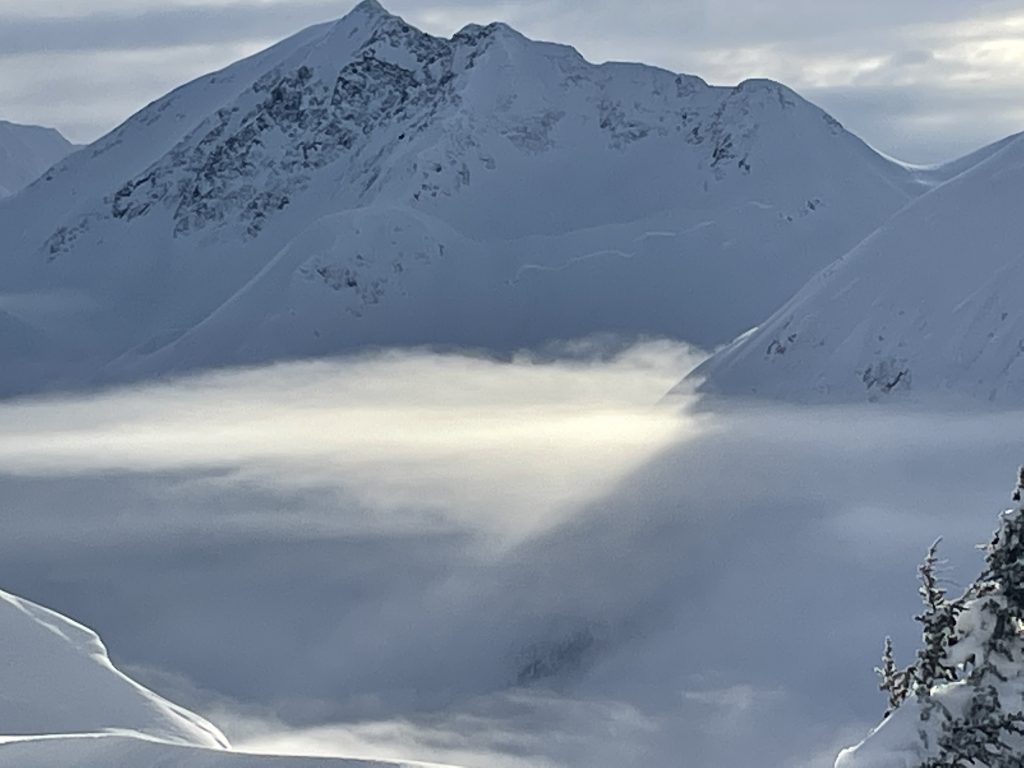 Large natural avalanche that released sometime during the 1/28 storm on Berg Peak behind Alyeska. Photo taken from Notch by William Zenker. 01.29.2022.

As the skies cleared yesterday we were able to get a sense of a widespread natural avalanche cycle that occurred during the storm on Thursday and Friday. Based on what we saw yesterday in the field, it appears a lot of these avalanches failed at the interface between the storm snow and the old snow surface, which was a layer of stellars (i.e. snowflakes) on top of a very thin, brittle crust from warm temperatures on Wednesday. As clear weather continues today, we expect this layer may still be reactive, which means a person could still trigger a large avalanche 2′ deep or deeper. This will be most likely on upper-elevation slopes that had been wind loaded during the tail end of the storm. We received reports of multiple human-triggered avalanches yesterday in the back bowls of Seattle Ridge (details here).

With good visibility and calm winds today, the urge to get out in the alpine will be strong. It will be important to keep these lingering instabilities in mind, and approach steep terrain with caution. Be on the lookout for warning signs like shooting cracks, collapsing, and more avalanche activity. Seek out more information by using smaller test slopes to test for reactivity. Take the time to hop off your machine or step off the skin track and poke into the snow to see if the storm slab still wants to pop off the layer of older snow. Any of these signs are bulls-eye data that the conditions are dangerous. Keep in mind this note from the Widowmaker avalanche: “No obvious red flags. Ski cut and cornice cut did not effect the slope. The avalanche released on a slightly steeper, more wind loaded aspect. 3rd skier triggered the slope.” This may be a tricky problem to assess, with a high level of uncertainty as to just how reactive these lingering instabilities may be.

As the old saying goes, when the snowpack is the question, terrain is the answer. Stay safe today by avoiding steep, wind loaded slopes. As always, be sure to travel one at a time and keep an eye on your partners. It is looking like today is going to be a fantastic day in the mountains. But a sunny weekend day immediately following a storm means the crowds will be out, and this is the kind of situation where accidents are most likely.

Cornices: The moderate to strong winds during the recent storm have built large cornices. Some of which have already failed naturally. It is very likely these fresh cornices will fail under the weight of a person, so be sure to give them plenty of space while traveling along ridgelines.

Dry Loose Avalanches: With up to 2-3′ of soft snow on the surface, dry loose avalanches (sluffs) will be running fast with a large volume. These are unlikely to be big enough to bury a person, but they can have serious consequences if they carry you down steep, consequential terrain. 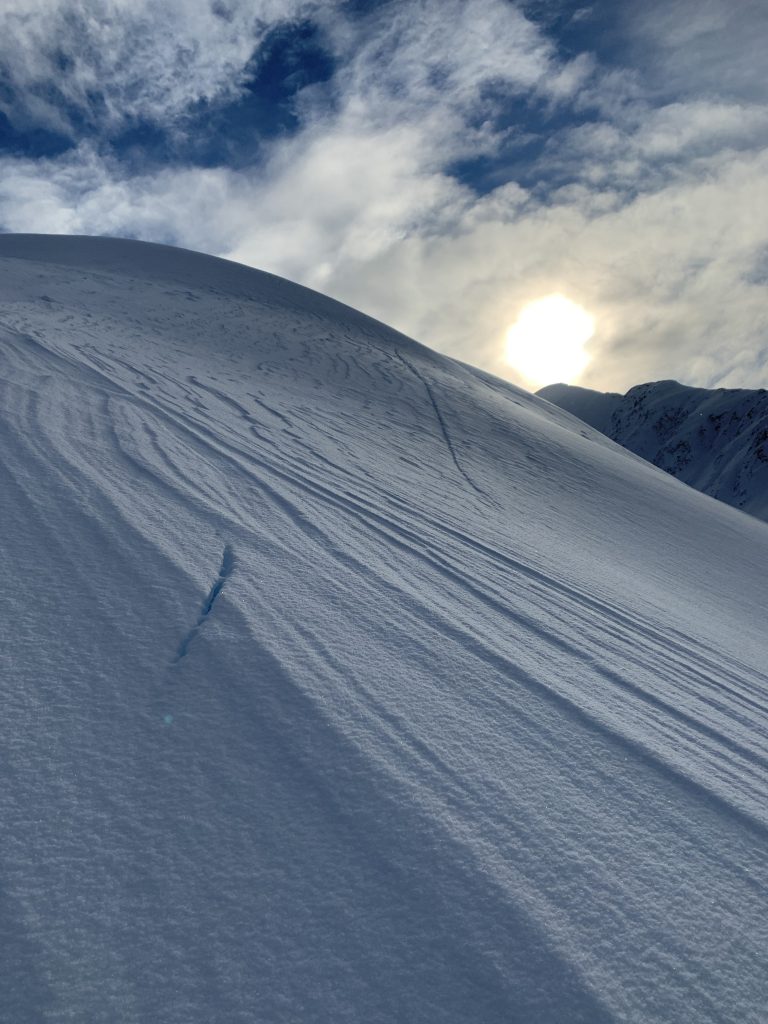 Shooting crack on a wind-loaded slope on Sunburst. This crack actually shot out from the crown of a natural avalanche that released sometime during the storm. Photo: Brooke Edwards. 01.29.2022 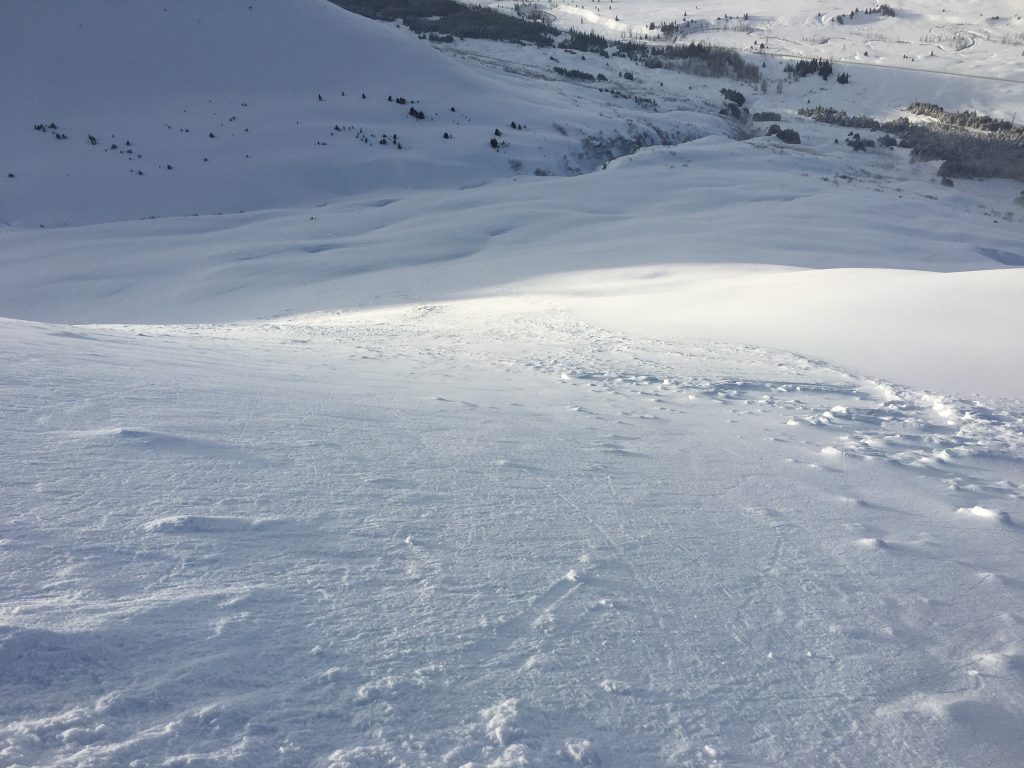 Looking down the path of a natural avalanche on Sunburst. The avalanche released mid-storm, but we suspect a person could still trigger a similar avalanche today. 01.29.2022

Video from the crown of one of the natural avalanches on Sunburst (linked here):

Yesterday: The clouds started breaking up, with some periods of full-on sunshine in the middle of the day. High temperatures were in the mid to upper 20’s F, and lows dropped down to the low teens F. Light westerly winds were blowing 5-10 mph, with no precipitation. Some valley clouds were forming intermittently.

Today: Clouds will continue to dissipate today, with some lingering low-level valley fog possible. Skies should be mostly clear later in the day. Temperatures are currently in the upper teens to low 20’s F, and are expected to drop slowly through the day into the low teens overnight. Winds are expected to remain light around 5 mph, and no precipitation is expected.

Tomorrow: Another day of fair weather is expected tomorrow, with mostly clear skies and light winds around 5 mph. High temperatures are expected in the upper teens to 20 F, and no precipitation is expected.

1Winds shifted from easterly to westerly around midnight last night.
2Anemometer covered in rime and not reporting until 8 p.m.