The avalanche danger is  MODERATE  above 1000′ on all aspects. Lingering wind slabs (up to a foot thick) will be possible to trigger along with a larger slab avalanche (up to 2′ or more thick) that breaks in weak layers deeper in the snowpack. Sunshine today may trigger small wet loose avalanches on steep Southerly aspects.

**If headed South of Turnagain Pass be aware of recent avalanche activity in Summit Lake and Lost Lake areas. Click  HERE  for the Summit Summary and click  HERE  for several observations from Lost Lake.

Elevated avalanche danger exists in many areas of Southcentral Alaska including  Lost Lake  on the Kenai, the  Western Chugach,  Hatcher Pass, and parts of the Alaska Range. Recent natural and human triggered avalanches have occurred this week due to new snow and strong winds region wide; more snow is expected in the Anchorage and Mat-Su areas this weekend.

Finding and triggering a slab avalanche that breaks in weak snow 1-2+’ deep in the pack remains a concern. This could be in the form of a lingering wind slab or a much older slab that sits on weak layers in the mid-pack. Although today’s clear skies should reveal a dusting of new snow from yesterday, this is likely only enough to obscure a generally variable and wind affected surface through the region. With a longer sunny day ahead, here are the things to keep in mind:

Lingering wind slabs:  Strong Northwest winds impacted the region last week and due to unusual wind loading patterns, formed hard wind slabs on a variety of aspects. Watch for steep areas harboring stiff snow over softer snow and cracks that shoot out from you. Old wind slabs can be found along ridgelines and in steep rocky terrain, but also mid-slope in cross-loaded gullies. Even a small slab can have high consequences in steep and committing terrain.

Persistent slabs:  Several weak layers sit in the middle and base of the snowpack and as recent as last Tuesday, skiers triggered a large ‘persistent slab’ in the Summit Lake area. This problem has shown to be more pronounced on the Southern end of Turnagain Pass and Summit Lake where the snowpack is shallower (areas to the North, such as Crow Pass, could also be suspect). Wednesday, during the wind event, numerous large avalanches released naturally near Silvertip Creek and in Summit Lake, most likely due to winds overloading these various weak layers. In short, buried 1-2 feet deep are facets sitting on a crust at the mid-elevations and buried surface hoar at the higher elevations. Whumpfing has been widely reported in the mid elevation band region-wide. If headed out for a long day in the mountains, remember these layers are there and no red flags may be present before a slab releases.

Solar warming/effects:  Sunshine today along with light winds may allow for enough warming to initiate small wet loose avalanches on steep Southerly aspects. Warming may also cause slabs to be more reactive; something to keep in mind as we choose our late afternoon terrain.

A wide angle view of Sunburst, Magnum, Cornbiscuit and Lipps – it may be March, but a generally thin snow cover remains 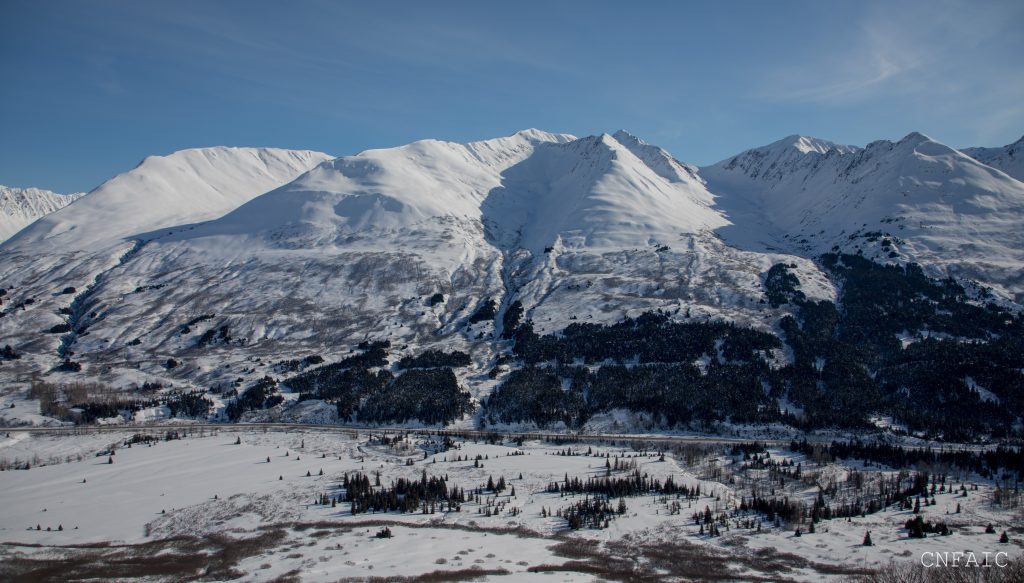 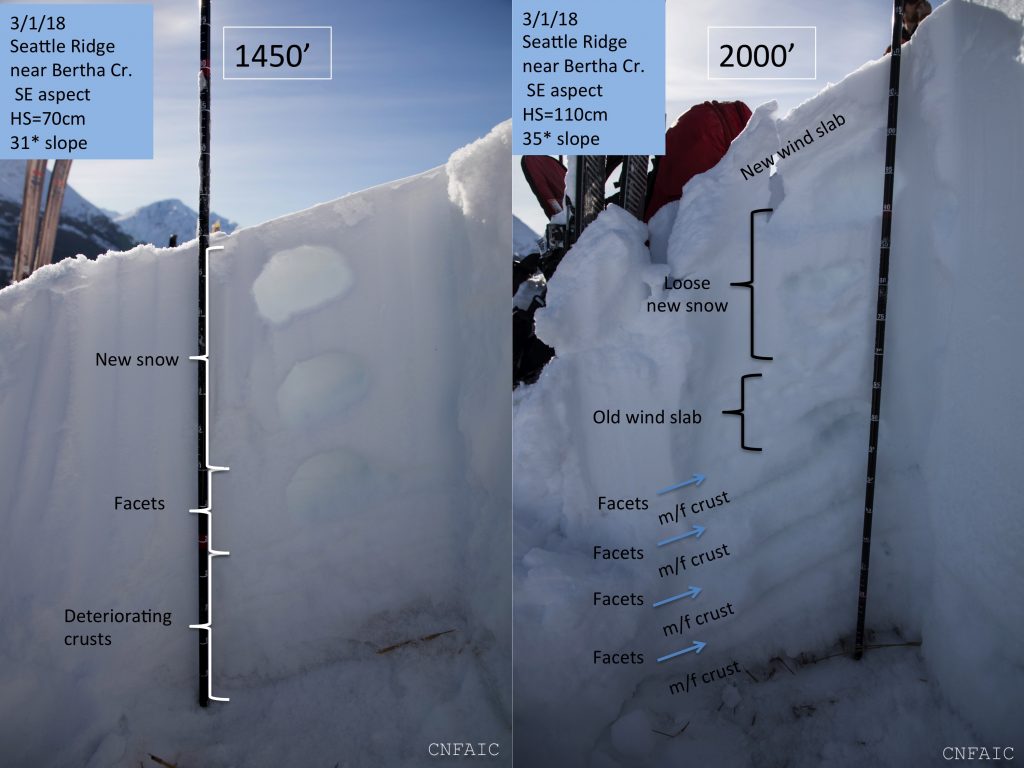 Overcast skies and snow flurries were over the region yesterday, with a trace of snow accumulating. Temperatures were in the upper 20’sF at 1,000′ and around 20F along ridgelines. Ridgetop winds were light and variable during the day before shifting Northwesterly overnight and picking up to the 5-10mph range. Temperatures also cooled to the teens overnight with colder air moving in.

Today, Sunday, we are expecting mostly sunny skies with light Northwest ridgetop winds (5-10mph). Temperatures are expected to rise to 30F at 1,000′ and to the mid-20’sF along ridgelines.

Tomorrow, Monday, clouds move back in with another chance for snow flurries (little accumulation). The big news is later this week, a larger low-pressure system is forecast to move into the Gulf of Alaska. This could bring a much better chance for snowfall to the Turnagain area and Western Prince William Sound. Stay tuned!