The avalanche danger in Turnagain Pass is  MODERATE  above 1500′ where triggering a persistent slab avalanche 2-4+ feet deep is possible and  consequences remain high should you find a trigger spot. Additional avalanche problems to be aware of are wind slabs, cornices and loose snow avalanches – heat from the sun could make these easier to trigger.  Be sure to  carry your rescue gear and practice safe travel protocol – such as exposing one person at a time, grouping up in safe zones, having escape routes planned and watching your partners!

Below 1500′  the danger is  LOW,  where a hard crust has stabilized the snowpack.

Summit Lake and Girdwood:  An unstable snowpack exists and human triggered avalanches breaking near the ground are possible. Make sure and check the Saturday Summit Summary  HERE.

Many areas around Southcentral, Alaska including the  Southern Kenai Mountains, Seward, Snug Harbor and Lost Lake,  Anchorage Front Range, Hatcher Pass continue to have an unstable snowpack.  Human triggered large avalanches, breaking near the ground, are possible.  Please see link above for recent activity. Keep in mind avalanches can be  triggered remotely, from below or mid-slope.  Careful snowpack evaluation and cautious route-finding is essential.

Mark your calendars: This weekend CNFAIC and the Anchorage Snowmobile Club will be hosting a FREE Avalanche Rescue Workshop at Turnagain Pass, 11am -12:30pm in the Motorized parking lot. We will focus on practicing with your avalanche beacon, probe and shovel. This workshop is open to everyone and anyone, novices and experts, that recreate in avalanche terrain €“ snowmachiners, skiers, snowboarders, etc €¦ Click HERE for more details.

Clear skies, soft snow and warm weather provided just the right conditions for a busy weekend in Turnagain Pass. Lots of steeper terrain was tested on both side of the road (non-motorized and motorized) and confirmed our primary concern: Large persistent slabs are stubborn to trigger, but can propagate with enough force and/or if a person finds just the right trigger spot. On Friday there were two separate snowmachine triggered avalanches in the Turnagain zone. One in Seattle Creek where a rider was completely buried except for his hand sticking out. His partners, who were watching from a safe zone, located him in minutes. He was uninjured. In Lynx Creek a snowmachiner triggered a slope just after he crested a hill but was not caught. No obvious signs of instability were observed and in both cases there was already tracks on the slope.

These avalanches were triggered on an old/weak foundation, facets near the ground. This upside down, poor structure exists in many places across our forecast zone, but not on every slope. Spacial variability of our snowpack, varying depths and inconsistency of the weak layer, make for difficult and near impossible assessment of an entire slope. This type of avalanche is often triggered in a thin part of the slab, near rocks or on the edge of the slab. These can also be triggered by multiple skiers/boarders and/or snowmachines on, near or under slopes. This speaks to the uncertainty of our current avalanche problem and the dangers of a stabilizing snowpack. Remember many steep slopes have tracks on them, this does not mean all of these slopes are safe. It may be the 3rd or 10th or 25th track that tips the balance. The likelihood of triggering a deep persistent slab is decreasing, but the consequences remain high should you find the wrong spot. This kind of MODERATE danger has an element of “rolling the dice” and does not make for easy decision making. If you decide to venture onto bigger terrain please keep in mind:

A view from the Seward Hwy of the avalanche triggered in Seattle Creek on Friday, 2/3/17. This is near -3 bowl, East of the Headwall. 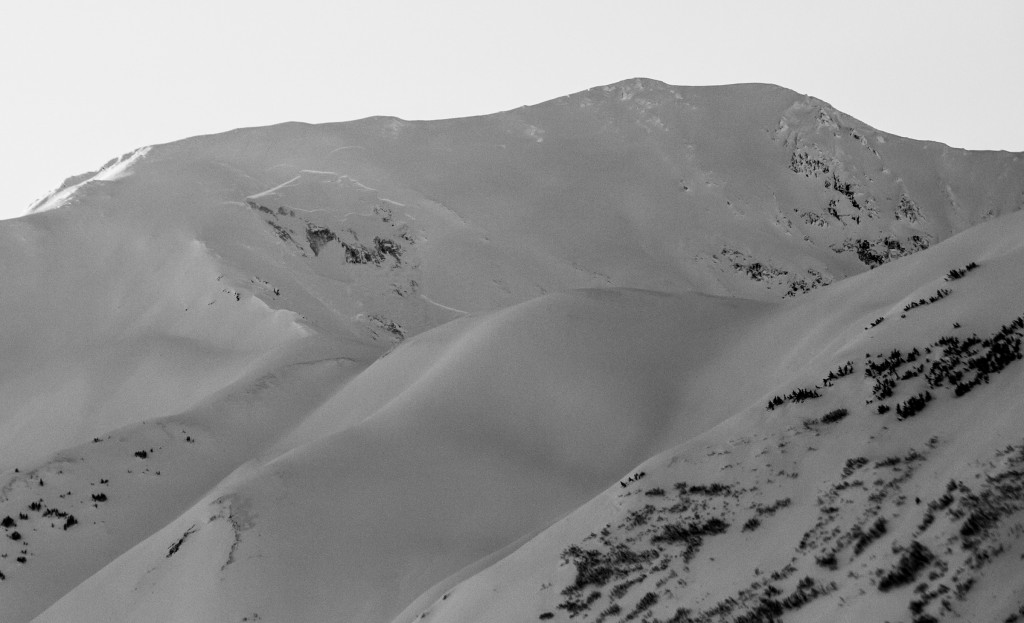 Over the last few days the sun has been affecting the snow on Solar aspects (East – Southeast – South.) Small sun induced rollerballs and a few point releases have been observed as well as a sun crust on some Southern aspects. Today light SE winds should keep snow surfaces cool, but should the sun have some heat keep in mind it could make the following additional avalanche concerns easier to trigger:

Wind Slabs: An observer yesterday reported a period of light winds drifting snow onto leeward aspects. New shallow wind slabs may be tender, or it may still be possible to find an old stubborn wind slab on leeward slopes. Look out for pillowed or drifted snow and avoid areas with stiff snow over soft snow. Warm temperatures and direct sunlight may make these slabs easier to trigger on solar aspects.

Loose snow: With 4-8″ of loose snow on the surface over a dense base, watch your sluffs and watch how the sun is affecting the snow around you. These may pack enough punch to push you somewhere you don’t want to go i.e. a terrain trap.

Cornices: This weekend cornice cracks were reported along the back bowls of Seattle Ridge making some of these cornices extra sketchy. Remember these unpredictable hazards can break farther back onto a ridge than expected and have the potential to trigger an avalanche on the slope below. Give cornices extra space and avoid being under them.

Sluff under ski tracks on Lipps SW face as seen yesterday. This slope experienced warming from the sun and roller balls can be seen under rocks. This is a good example of terrain that likely harbors an unstable foundation and has the potential for a large propagating avalanche. 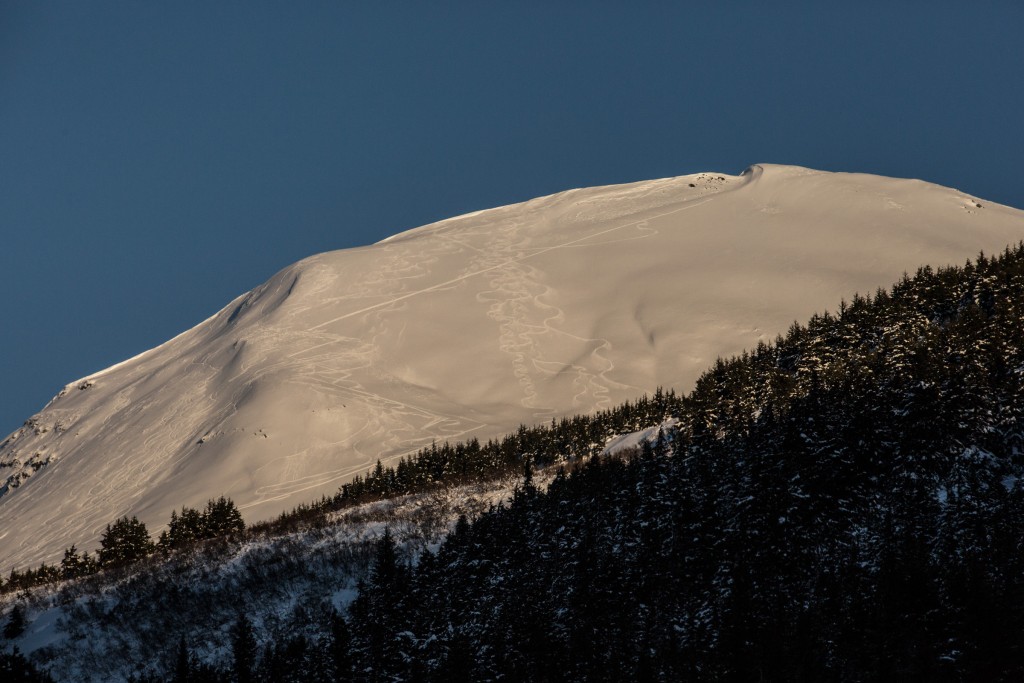 Yesterday inverted ridge top temperatures reached a high of 34F in the morning and were dropping throughout the day into the upper 20F’s. Pockets of cold air in valley bottoms averaged in the teens F. Ridgetop winds were light to moderate from the East, 5-20mph. No precipitation has been recorded in many days.

Today expect a similar weather pattern. The upper elevations are expected to be in the mid to high 20F’s and valley temps will remain cooler, in the teens F’s.   Expect sunny and clear skies with light to moderate SE winds (10-20mph.) This pattern is expected to last over the next few days with temperatures cooling off. Our next chance for snow flurries may be as early as Thursday or Friday.