There is a generally LOW avalanche danger in the Turnagain Pass region where triggering an avalanche in unlikely. However, there are areas above 1,500′ that have a poor snowpack structure and there remains the chance for triggering a large slab avalanche (2-5′ thick) that breaks near the ground;  this situation is keeping the danger MODERATE. Likely trigger points are thin areas on a slope (i.e. where rocks are showing through) and likely triggers are large, such as groups of people, snowmachine(s), and cornice falls. Additionally, there are some normal caution problems to keep an eye out for today, these are: shallow fresh wind slabs, sluffs in steep terrain and cornice breaks.

*This is a low probability but high consequence situation and it is critical that safe travel protocols are executed and avalanche rescue gear is carried. This means only one person on a slope at a time – in the event an avalanche is triggered, there is/are people capable of rescue. Also, have escape routes planned and watch your partners. These practices likely saved the life of a person fully buried near the Seattle Ridge Headwall on Friday, Feb 3rd (this near miss report will be published by tomorrow morning).

The brilliant sunny skies and quiet weather conditions we have been having for a week now continue to allow folks the opportunity to put tracks on the mountainsides all over the Chugach National Forest. This is what February is about! Despite the high number of people testing the slopes with snowmachines, skis and snowboards, we have only had two large and dangerous avalanches triggered, but this is enough to keep our guard up – these were both on Friday HERE and HERE. The likelihood for someone to find and triggered a large slab is decreasing each day as the snowpack adjusts slowly, but it’s the consequences that are scary and why we all need to be on guard and utilize safe travel protocol.

Deep slab avalanches?  Photo below is the crown from one of the avalanches triggered on Friday, this one by a snowmachiner on the Seattle Ridge Headwall. We were able to visit the site yesterday and assess the avalanche. We found various degrees of weak faceted snow in the bottom foot of the snowpack that was the culprit weak layer. This slope is also near the ridge at 3,700′ and is highly affected by wind with thick areas of the slab up to 4′ (seen below) and thin areas less than 2′. We dug a pit in a thin spot and had no results in stability tests, pointing to stable conditions despite the weak snow at the bottom of the pack. My point being, one is likely to have no signs of instability and there could be many tracks on a slope (as was the case in the below avalanche) before an avalanche occurs.

This deep slab problem is tricky and the important thing is to know you may be on a slope with weak snow underneath a stiff slab 2-4+’ thick that just needs a trigger in the right spot. Again, likely trigger spots are where the slab is thin, possibly next to rocks. Likely triggers are large: snowmachines, groups of people or cornice falls. 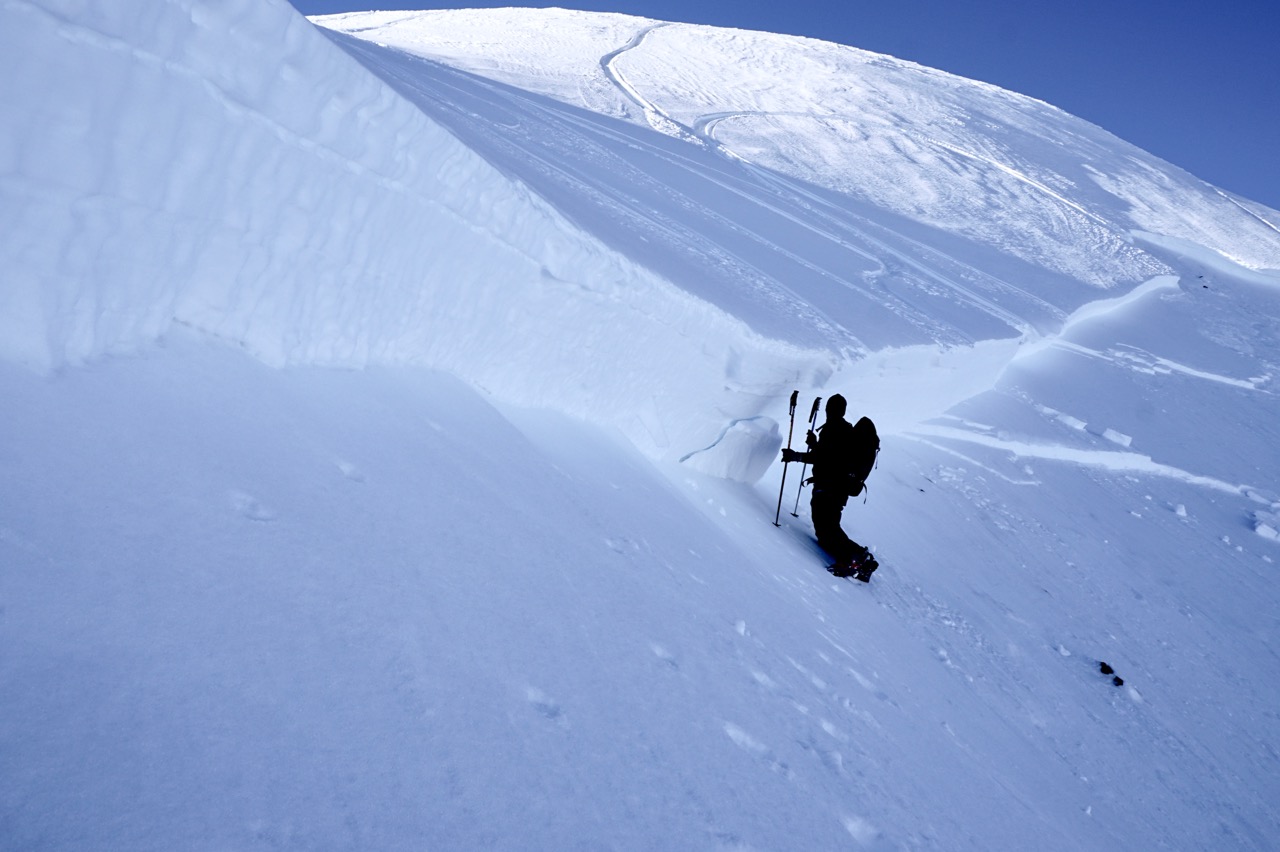 Cornices continue to bend over with the warm conditions and a piece of one in Warm up Bowl (1st Bowl) on Seattle Ridge broke off in the last day or two (photo below). These ‘backcountry bombs’ are worth avoiding and giving a wide berth. If your route takes you underneath them, travel quickly and minimize your exposure time. 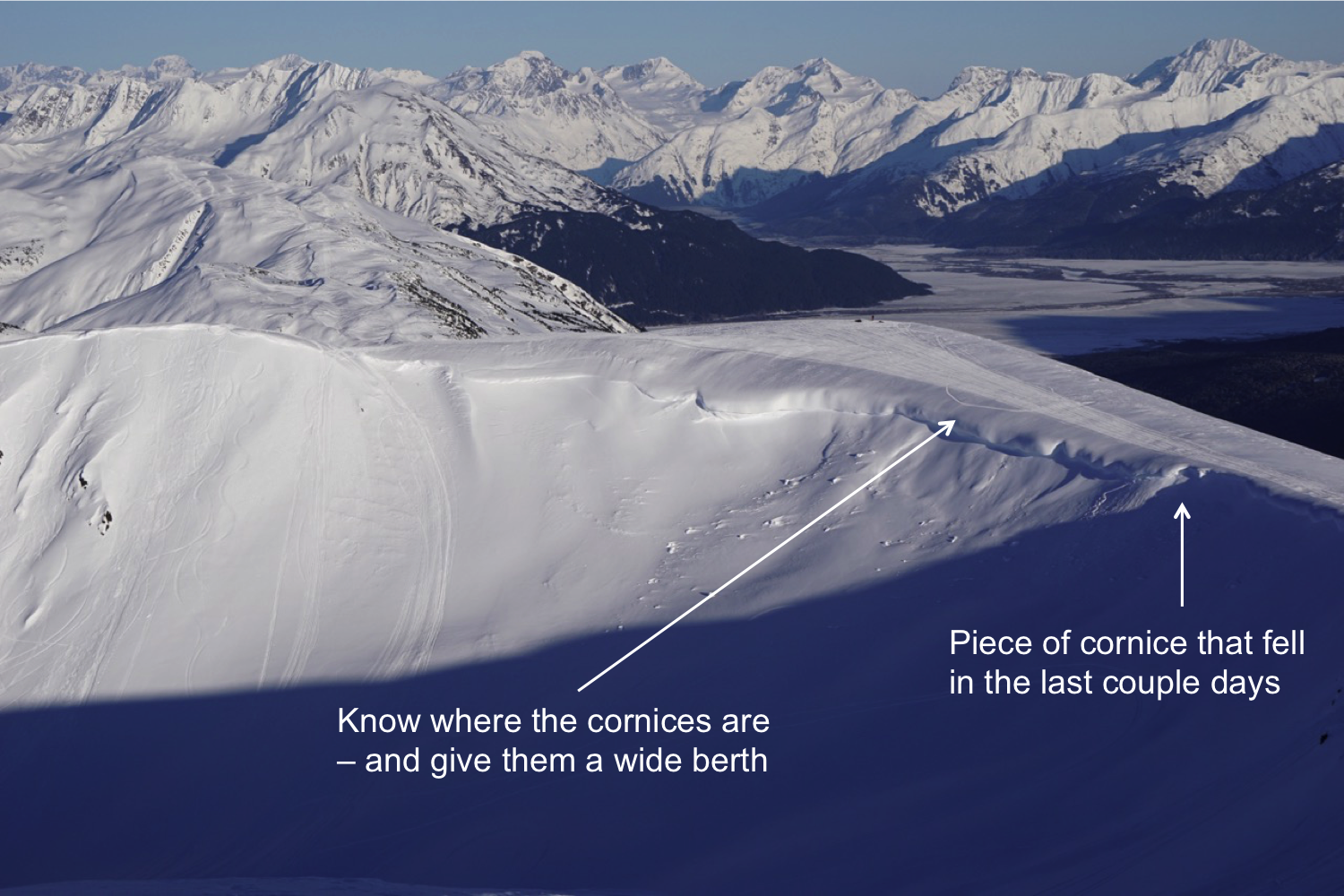 Wind slabs
Winds have been gusty in some areas, mostly from the South and East. These may have formed shallow winds slabs on leeward slopes and something to watch for today.

Loose snow sluffs
Sluffs on steep slopes harboring soft settled snow are possible again today. These have been relatively low volume but still something to watch for in the very steep terrain.

Over the weekend the sun was in full force, as anyone who was out can attest to. Sun crust, up to an inch or more thick, is now on many Southerly aspects. Photo on left is from the Alaska Avalanche School Level 1 course showing the extent of the sun crust at treeline on Tincan. Photo on right is from the Seattle Ridge up-track, this Southeast facing slope harbors frozen roller balls and a shimmering sun crust. Soft settled powder 4-8″ deep can be still be found in many shaded areas however. 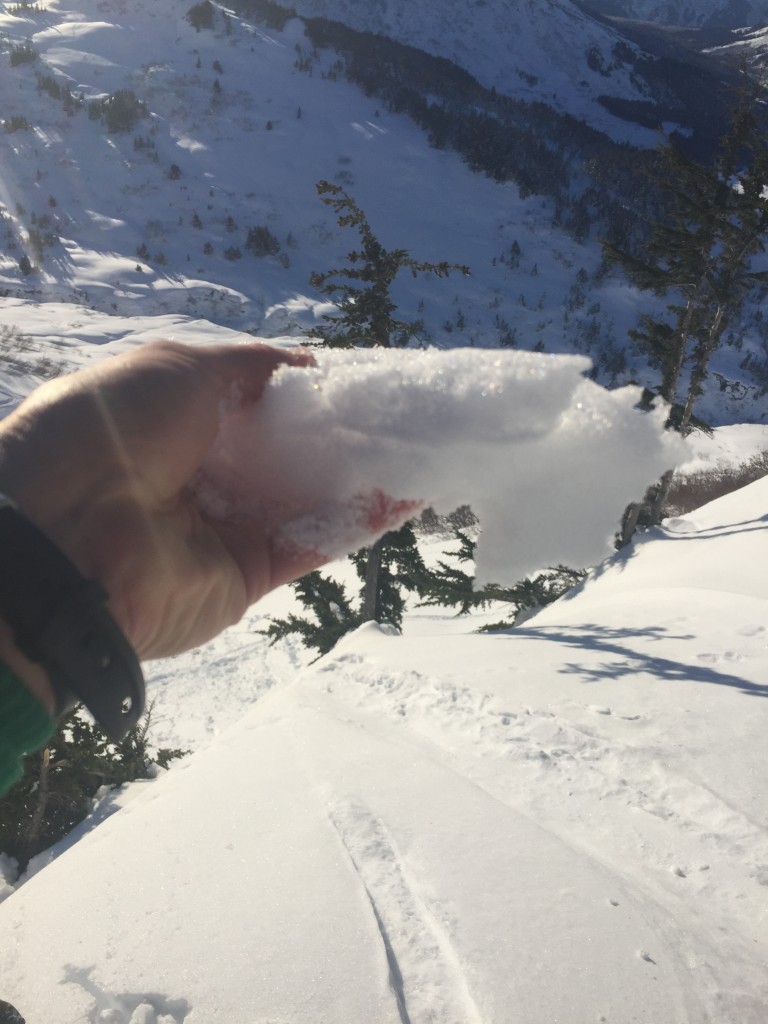 Clear skies were seen again yesterday with a moderate inversion in place. Temperatures in the valley bottoms were 5-15F while ridgetops were in the 25-30F range. Ridgetop winds were light from the South and East with gusts into the upper 20’smph at the Seattle Ridge weather station that is close to Turnagain Arm.

Another bluebird day is on tap today with light Southeast ridgetop winds (5-15mph). Temperatures have decreased overnight and should bump back to the mid 20’s F on the ridgetops today. Valley bottoms will remain cool, in the 5-15F range.

There looks to be a chance for a cold low-pressure system to bring snowfall our way Wednesday night to Friday. Stay tuned as to how this develops tomorrow morning!