Our plan was to ascend Corn Biscuit’s West Face to evaluate the current snowpack, hoping to dig on a variety of aspects and elevations. We specifically targeted Corn Biscuit knowing that the South end of Turnagain Pass experienced dryer/thinner early season conditions, compared to the North side of the pass. However due to crowded slopes today we decided it was not possible to maintain safe travel protocol due over a dozen people on the West face at the same time, both skinning up and skiing down. We changed plans and traveled along the NW shoulder (far lookers left) out from under the run-out of the West face. We dug a pit at 2000′, NW aspect and found exactly what we expected, a 3′ slab sitting on fist hard facets that required a lot of force to fail, but still indicated propagation potential. We also found a thin area, only 15″ deep that had chained depth hoar. This thinner zone along a wind exposed part of the ridge was a good (low angle) example of a possible trigger spot. Unfortunately we had to end our tour short due to a binding failure.

Probed around a lot at 2000' on a NW aspect, height of snow was between 100cm and 140cm. Could feel with probe that the last 10 to 20cm, near the ground were really weak. In a pit at this same elevation the height of snow was 120cm (3.9'), we found a 95cm (~3') slab (1F-4F hard) sitting on Fist hard facets, 20cm (8") thick. These loose dry 2mm sized facets were on moist facets on the ground. Our tests results were variable. Only one Extended Column test propagated and two didn't fail, even when additional forced was added. ECTP26, ECTXx2. We also did a propagation saw test and the weak layer failed at 45cm. PST 45/100End. These results show that it is very had to initiate the weak layer in a thicker part of the snow pack, but should you find just the right spot, there is potential for a slab to propagate. See video. We also noted on shovel shear test, 15" below the surface, a density change/old wind slab interface that produced a clean shear. We had no other results on this layer including a compression test, which failed on 19 taps on basal facets. 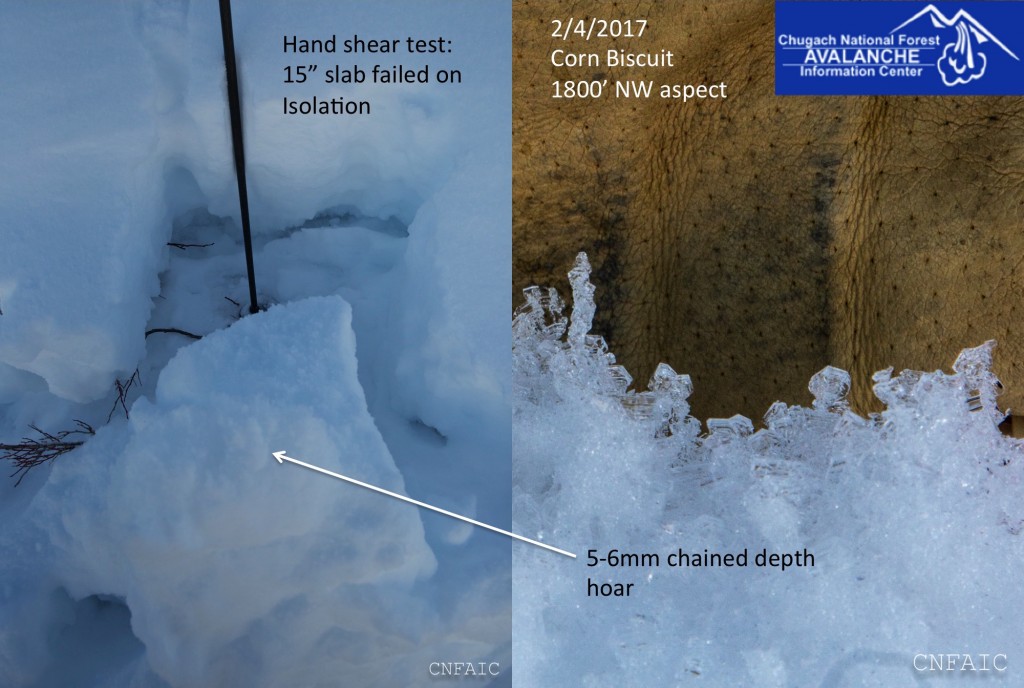 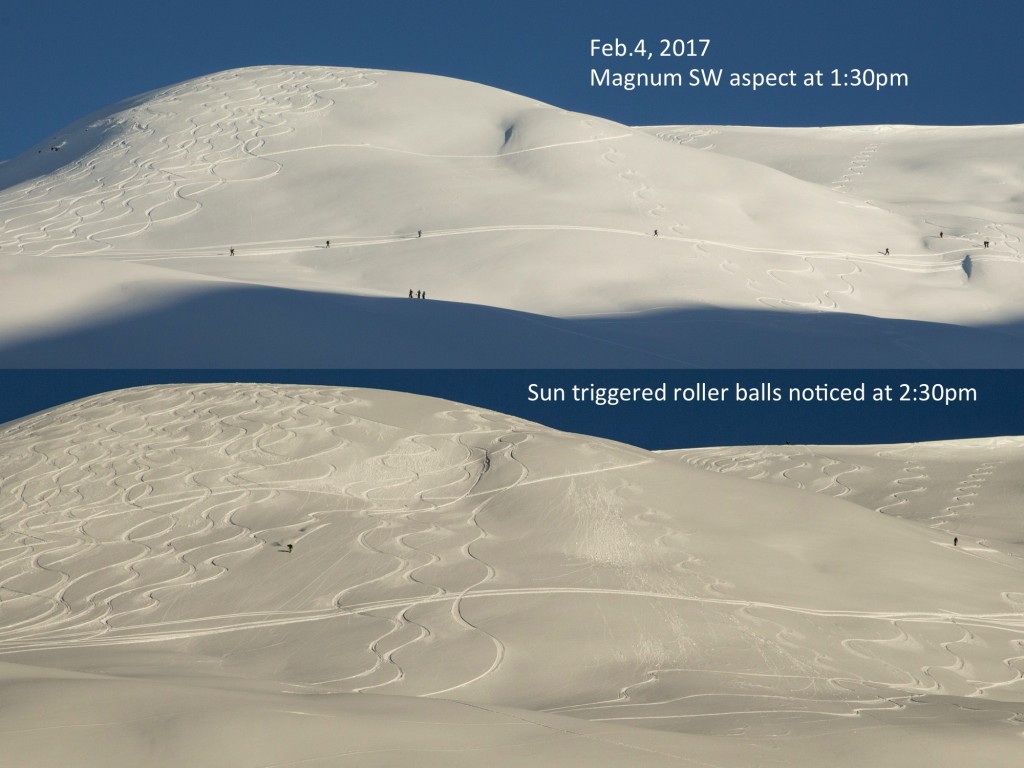 Two photos taken from our pit one hour apart, 1:30 and 2:30pm. There was noticeable sun affect within one hour. 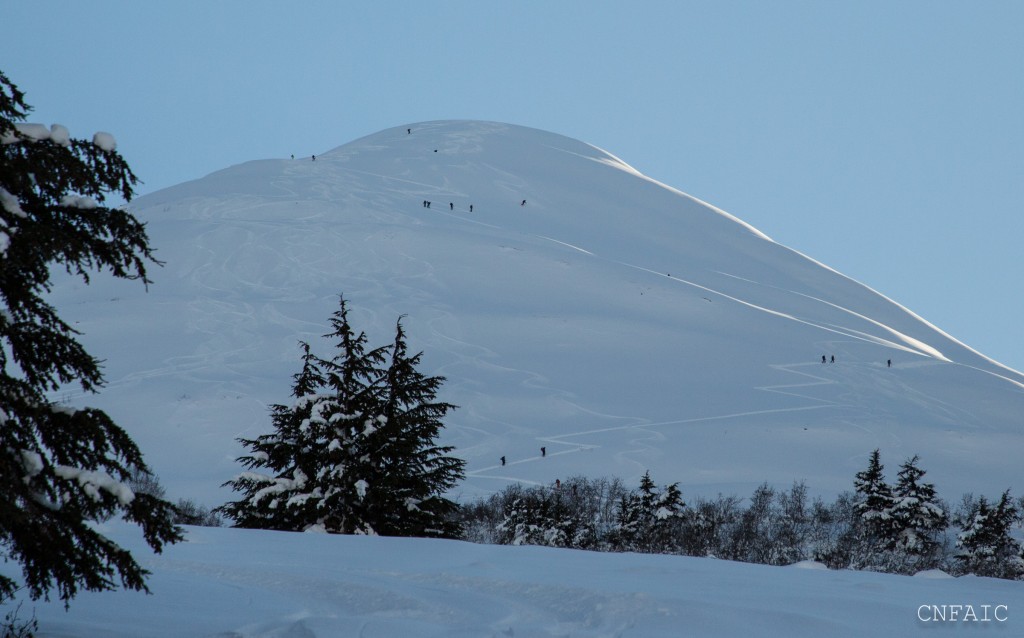 We counted 17 people on this slope at one point. Only 16 in this photo. This terrain is greater than 35 degrees it would be impossible to only expose one person at a time by spacing out. 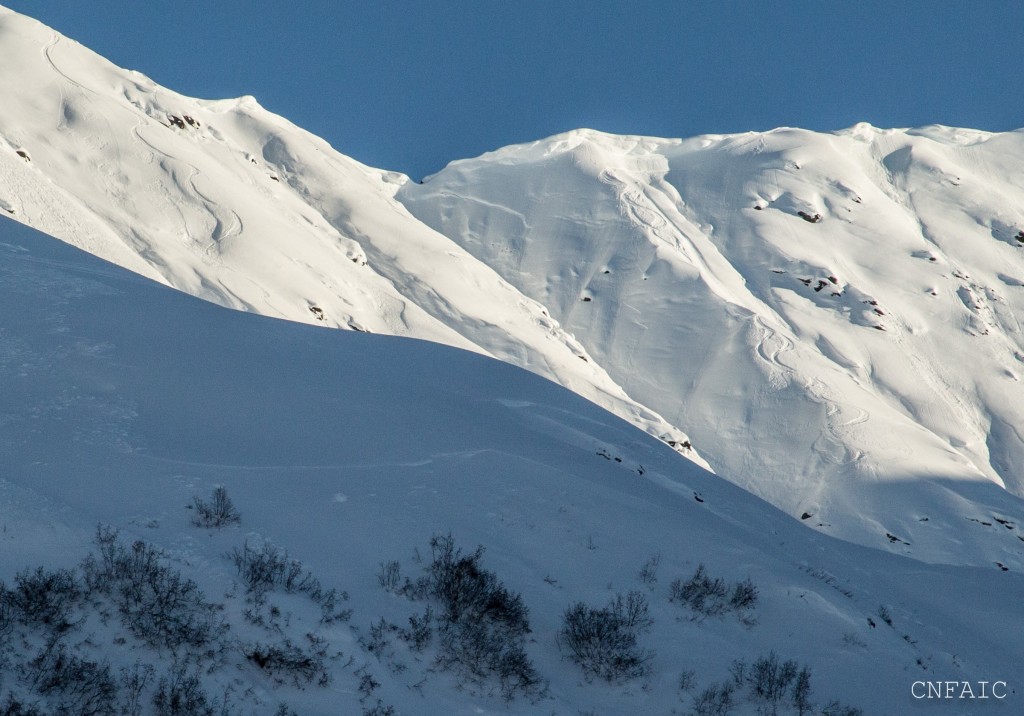 An older slab, maybe from the wind event on Monday, Jan.30, possibly triggered by cornice. 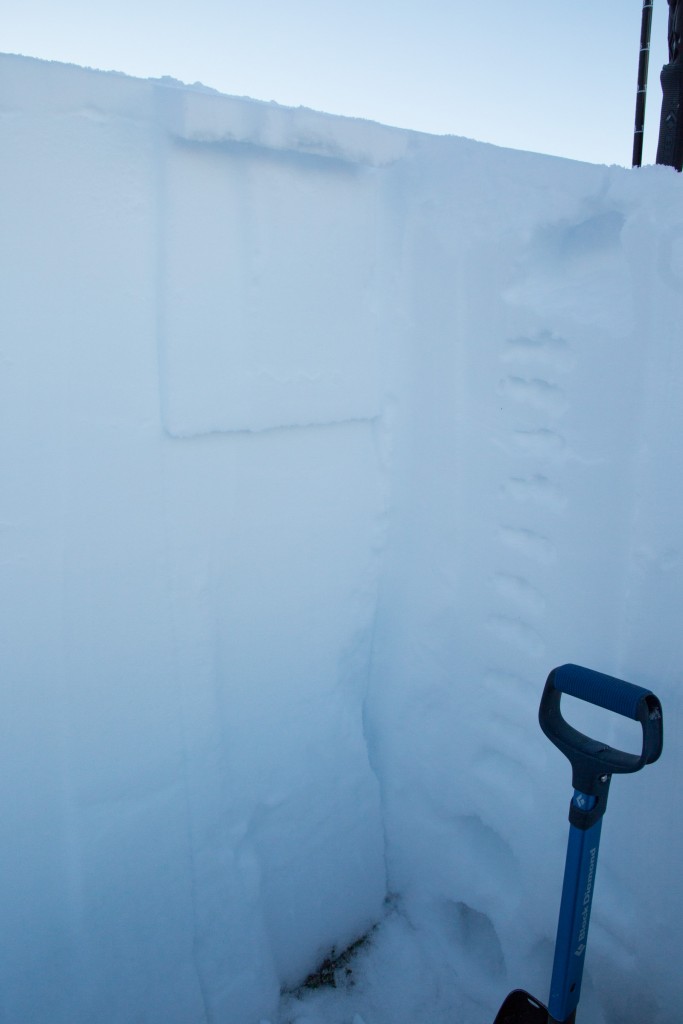 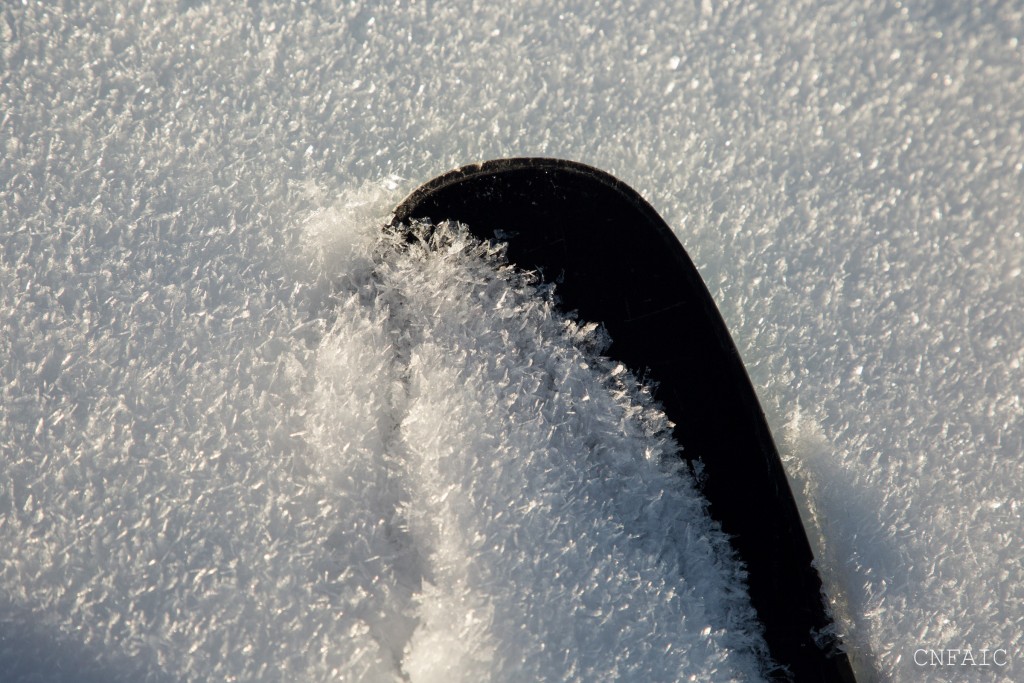 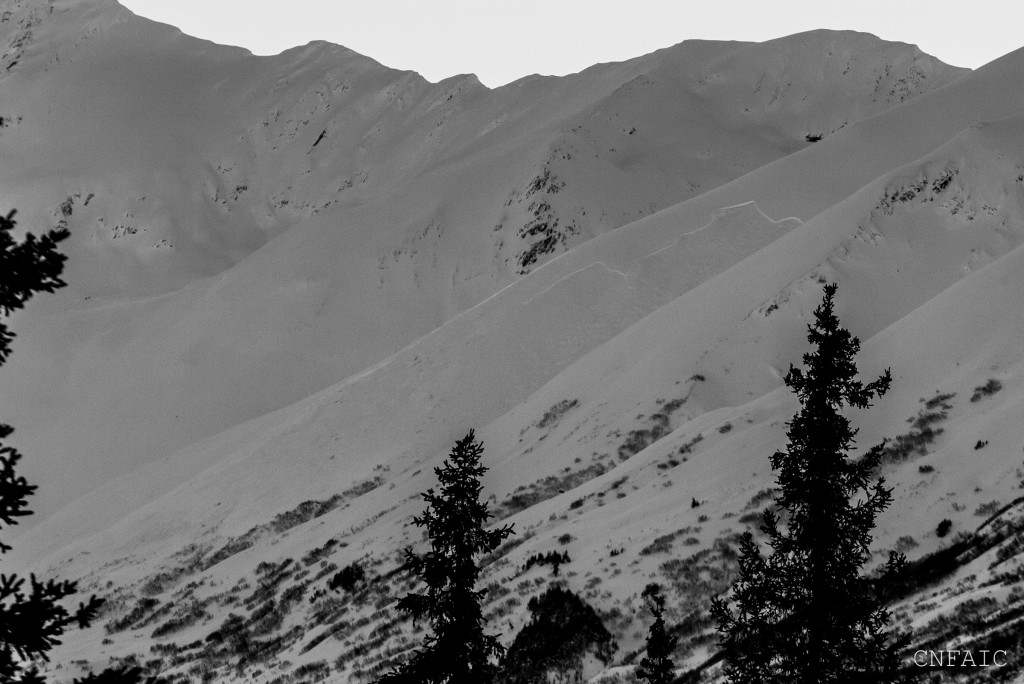 A view of the avalanche in Lynx Creek from the Johnson Pass trail head. This photo is taken with a 200mm lens and cropped. 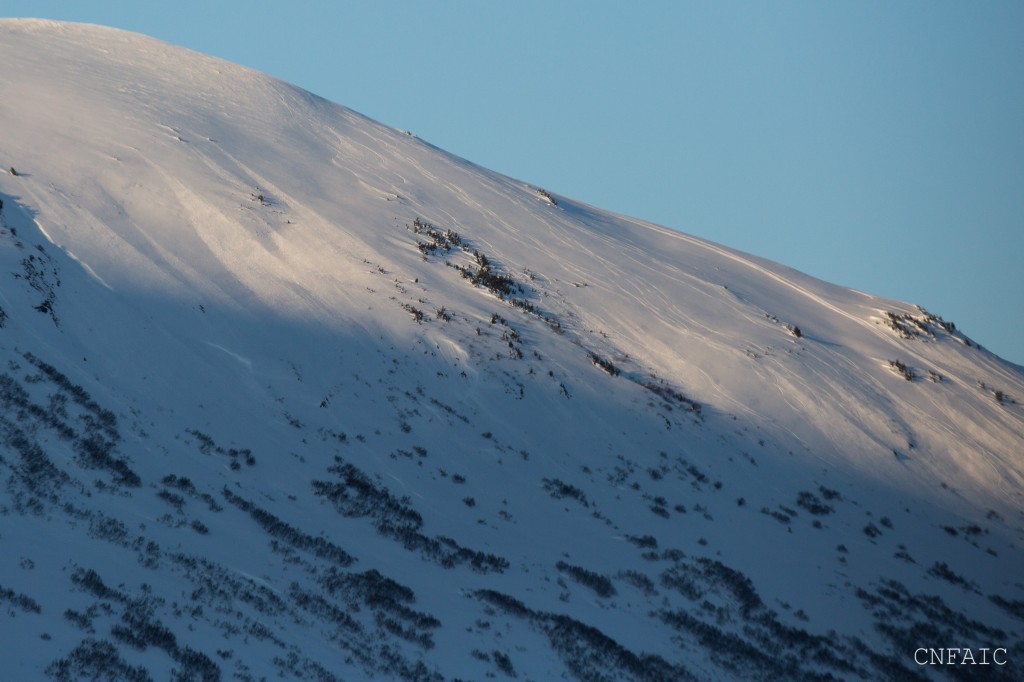 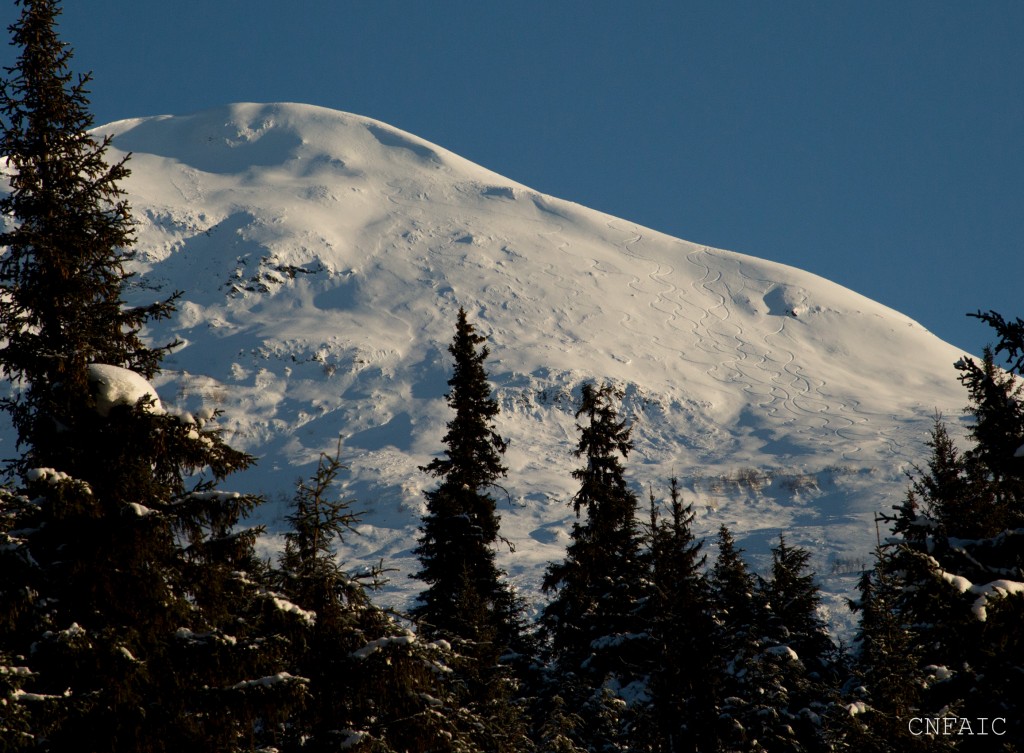 Some tracks on W face of Lipps. Looks like a good portion of this slope may have avalanched during the Jan.26 storm. 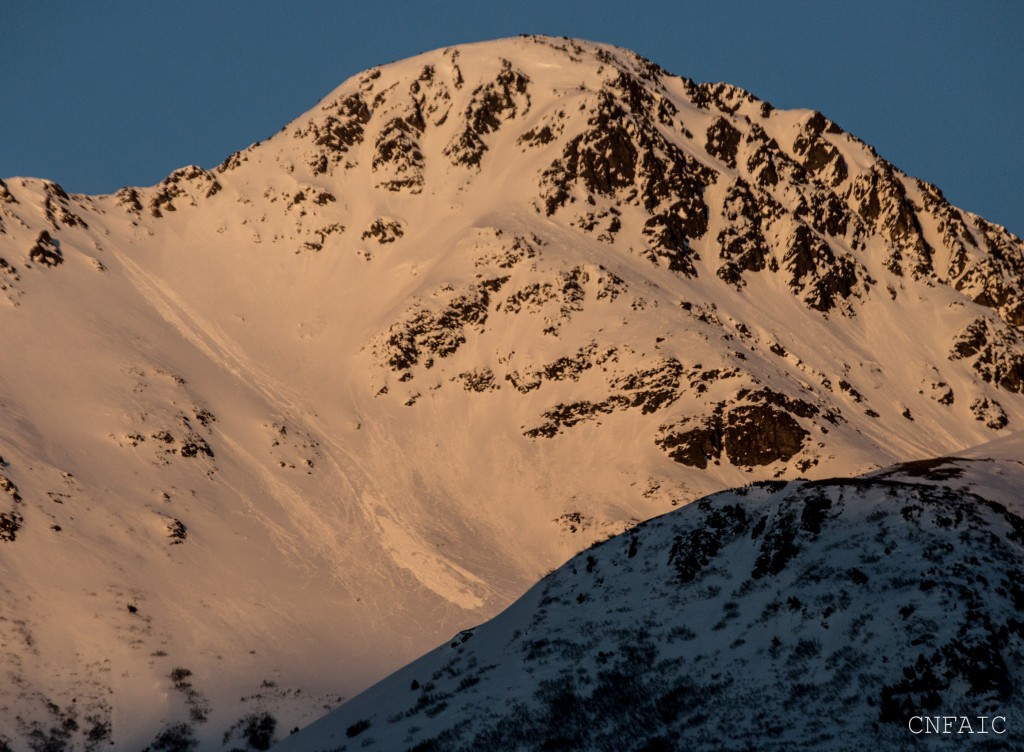