The avalanche danger remains  MODERATE  above 1000′ on all aspects. Triggering a large slab avalanche  breaking in weak layers 1-3′ deep in the snowpack  remains possible.  Watch for old wind slabs along ridgelines and in cross-loaded gullies. Evaluate snow and terrain carefully.

Human triggered avalanches continue to be reported region-wide, one at  Hatcher Pass  and another  in  the  Western Chugach (Hiland Road)  occurred Sunday. Snow last week followed by strong winds increased the avalanche conditions, which may continue to linger in many areas of Southcentral, Alaska.

Observers continue to find the buried persistent weak layers in the snowpack to be reactive and the possibility of triggering a large avalanche remains.  One observer yesterday found the January 21st buried surface hoar, described the snowpack they found in Lynx Creek as “spooky” and changed their plan due to concerning snowpit test results. This buried surface hoar layer was also observed to be reactive on Magnum yesterday as well. As snow starts today and hopefully falls throughout the week it will be important to remember the current state of the snowpack. Buried 1-2′ deep are facets sitting on a crust at the mid-elevations and 1-3′ deep is a buried surface hoar/facet combo at the higher elevations. The slab over the weak layers could be very hard if it is in terrain that was affected by the strong winds last week. This was the case in the skier triggered avalanche in Summit Lake a week ago, the mid-elevation faceted layer was under very hard wind-affected snow.  Although the heart of Turnagain Pass has the buried weak layers, they are more pronounced and developed on the Southern end of Turnagain Pass and in Summit Lake where the snowpack is shallower. Areas to the North, such as Crow Pass, are also suspect along with those that have not seen much traffic this season. Using safe travel protocols and assessing the consequences if a slab does release is key in choosing terrain. Weak layers like these can become more reactive after even a small additional load. As the snow falls this week keep that in mind and as always be alert for signs of instability.

Wind slabs: Hard wind-affected snow on steep, unsupported slopes may still triggered if you find the wrong spot. Be suspect of very stiff snow over soft snow or hollow sounding snow near upper elevation ridgelines and cross-loaded gullies. If winds really pick up this afternoon pay attention to changing conditions.

Snowpit on Magnum yesterday at 3100′. The January 21st buried surface hoar is easy to spot and still reactive in stability tests. 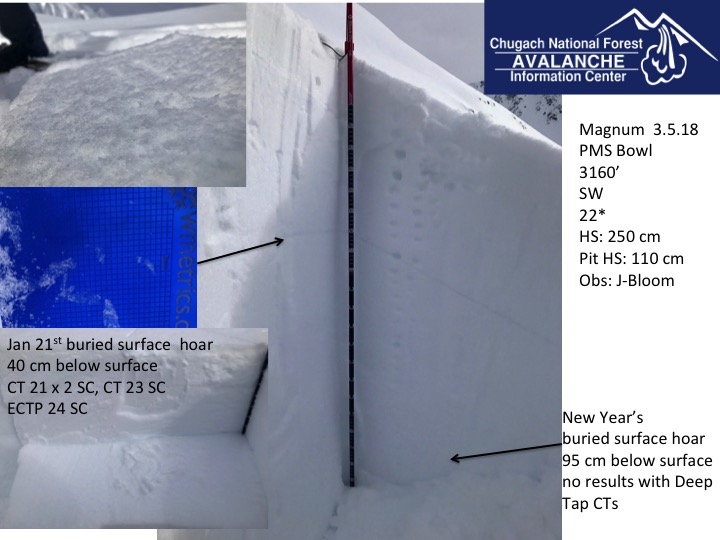 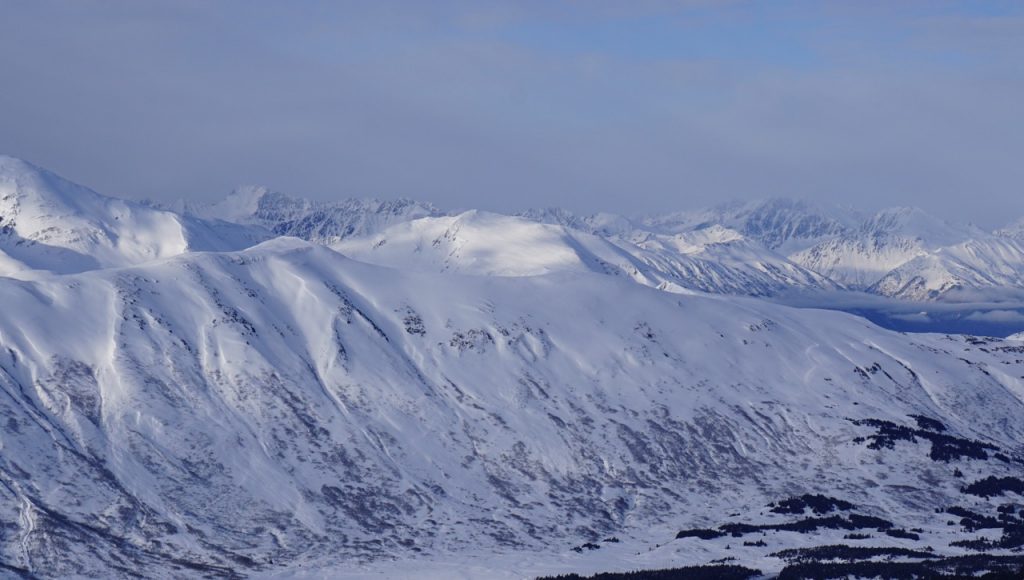 Tomorrow’s forecast has continued snow showers in the morning, clearing in the afternoon and then more snow in the forecast overnight. The next low pressure is lining up for more snow on Thursday but details are uncertain. However, the week ahead looks to be snowy.   From the NWS discussion this morning:  Despite March and April being  the driest months of the year (climatologically), Mother Nature is  giving that statistic a run for its money. Fingers crossed!