There is a generally  LOW  avalanche danger in the Turnagain Pass region where triggering an avalanche in unlikely. However, there are areas above 1,500′ that have a  poor snowpack structure and there remains the possibility of triggering a large slab avalanche (2-5′ thick) that breaks near the ground;  this situation is keeping the danger  MODERATE. Likely trigger points are thin areas on a slope (i.e. where rocks are showing through) and likely triggers are large, such as groups of people, snowmachine(s), and cornice falls. Additionally, there are some normal caution problems to keep an eye out for today, these are: shallow fresh wind slabs, sluffs in steep terrain and cornice breaks.

*This is a  low probability but high consequence situation  and it is critical that safe travel protocols are executed and avalanche rescue gear is carried. This means only one person on a slope at a time – in the event an avalanche is triggered, there is/are people capable of rescue. Also, have escape routes planned and watch your partners.  These practices likely saved the life of a person fully buried near the Seattle Ridge Headwall on Friday, Feb 3rd.    Check out CNFAIC Near Miss Final Report from this incident  HERE.

Sunshine and mostly stable snowpack conditions have allowed many people to test the slopes in the Turngagain pass area. However, if venturing out today it is important to remember there were two large and dangerous avalanches triggered on Friday HERE and HERE. The likelihood for someone to find and trigger a large slab is decreasing as the snowpack adjusts but the poor snowpack structure remains and the consequences are scary. It still important to be on guard and utilize safe travel protocol.

We visited the site of the Lynx Creek avalanche (one of the avalanches that occured on Friday, 2.3.17) yesterday and were able to find reactive snow in our flank profile. We will put together a more detailed report this week. This avalanche was large, with crown close to 1000′ feet wide, running over 1500′ and debris depths over 10′ deep in many places. The crown depth varied from 1′-4′ thick. In some places it stepped down from a mid-pack weak layer of facets to a lower layer of facets over a crust. This was triggered in a thin spot, which is something we have been talking about with this variable and spooky deep persistent slab set-up. One is likely to have no signs of instability and there could be many tracks on a slope before an avalanche occurs. The reactive snow in snowpack tests yesterday is an indication that propagation potential still exists.

This deep slab problem is tricky and the important thing is to know you may be on a slope with weak snow underneath a stiff slab 2-4+’ thick that just needs a trigger in the right spot. Again, likely trigger spots are where the slab is thin, possibly next to rocks. Likely triggers are large: snowmachines, groups of people or cornice falls. The poor snowpack structure will also be important to remember if and when we get another significant loading event. 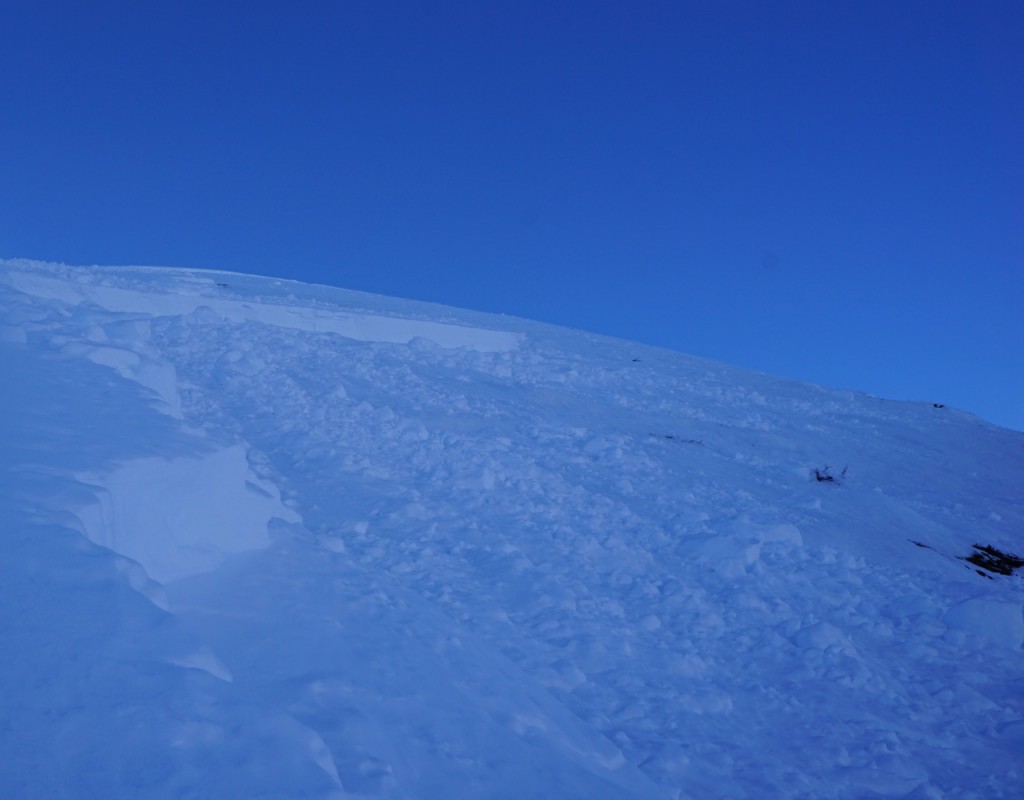 Extended column test in flank profile adjacent to Lynx Creek avalanche. Full propagation at 11 taps on a layer of small facets sandwiched between two harder layers. In parts of this avalanche it stepped down below this to a lower layer of facets over a deteriorating melt-freeze crust. 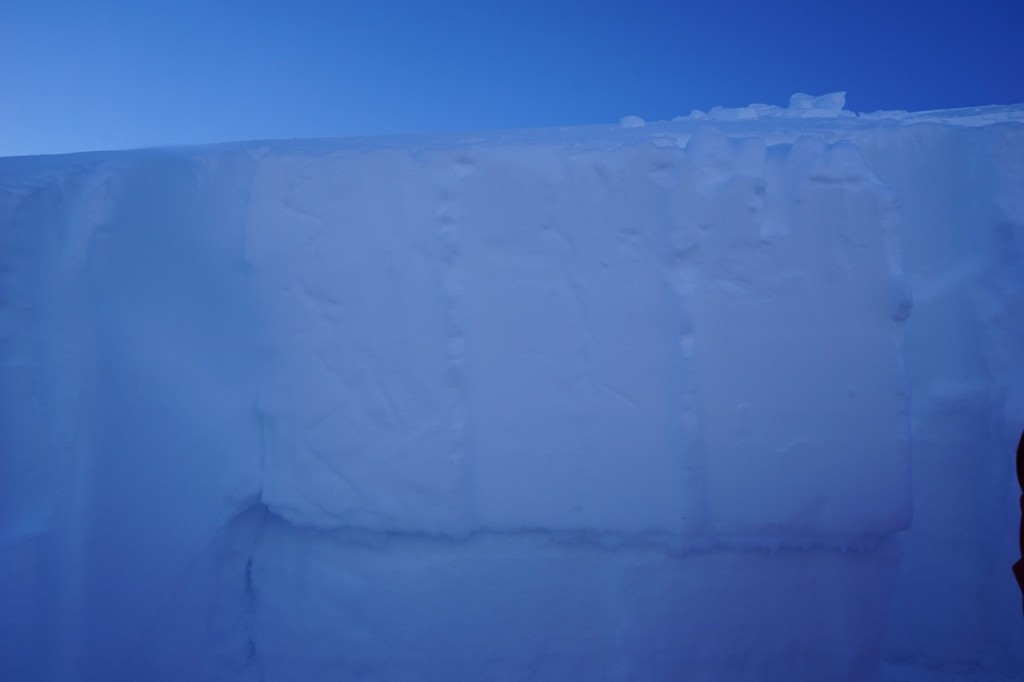 Cornices: This weekend cornice cracks were reported along the back bowls of Seattle Ridge making some of these cornices extra sketchy. A few chunks have been triggered this week. Remember these unpredictable hazards can break farther back onto a ridge than expected and have the potential to trigger an avalanche on the slope below. Give cornices extra space and avoid being under them.

Wind Slabs: An observer yesterday reported a period of light winds drifting snow onto leeward aspects. New shallow wind slabs may be tender, or it may still be possible to find an old stubborn wind slab on leeward slopes. Look out for pillowed or drifted snow and avoid areas with stiff snow over soft snow.

Loose snow: With 4-8″ of loose snow on the surface over a dense base, watch your sluffs and watch how the sun is affecting the snow around you.

Over the last few days the sun has been affecting the snow on Solar aspects (East – Southeast – South.) Small sun induced rollerballs and a few point releases have been observed as well as a sun crust on some Southern aspects. Today is forecasted to be cooler and cloud up. Expect to find the sun crusts on solar aspects. 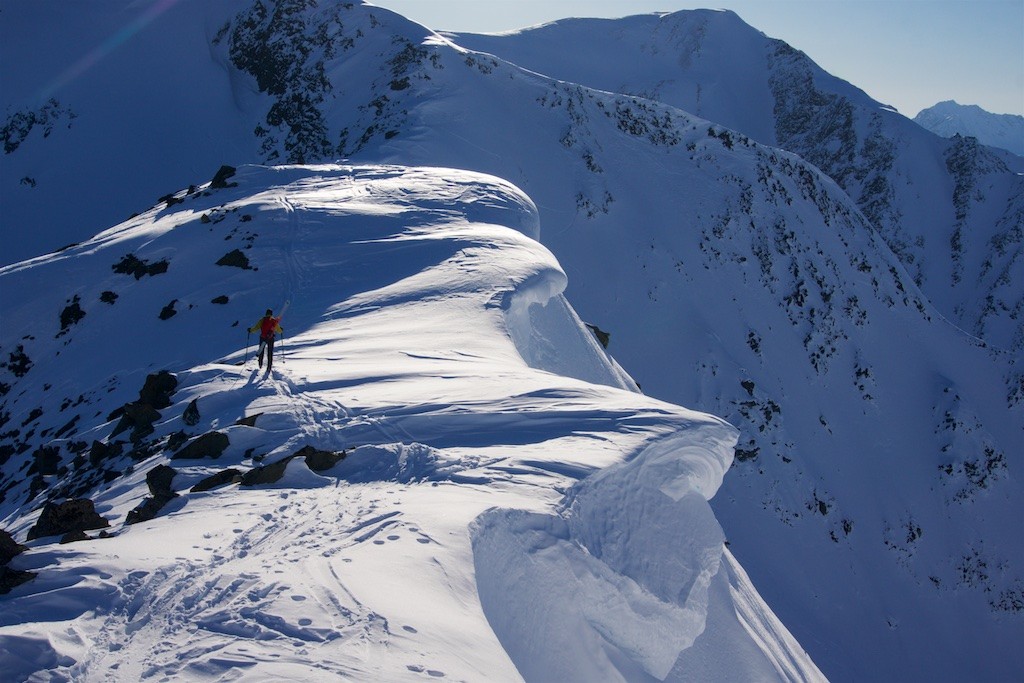 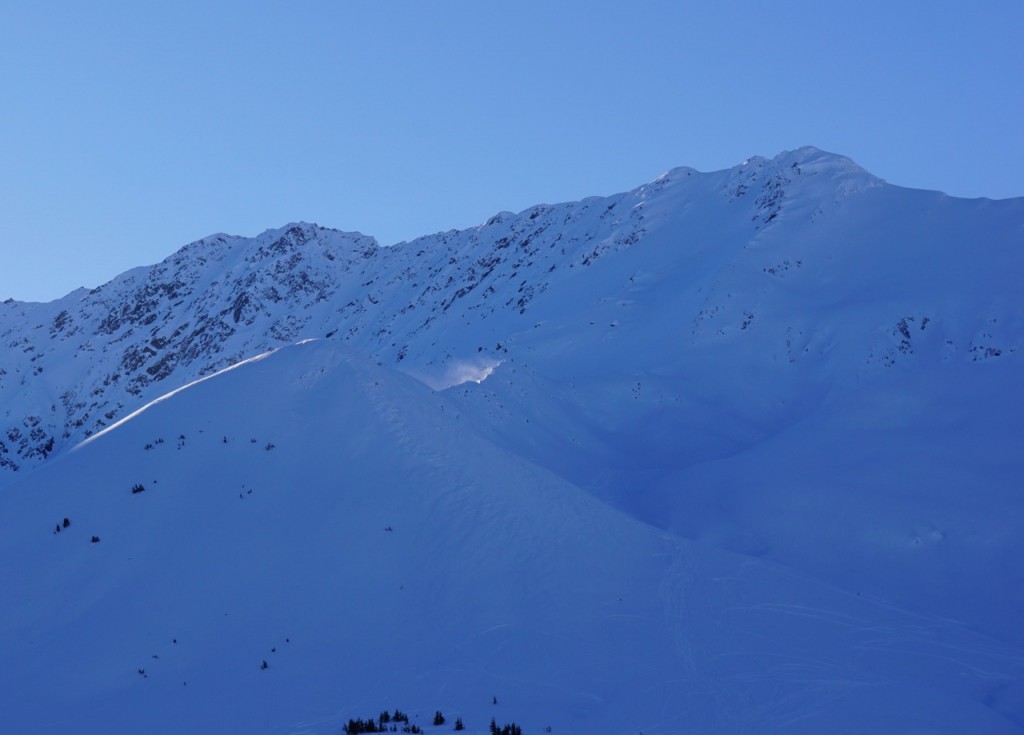 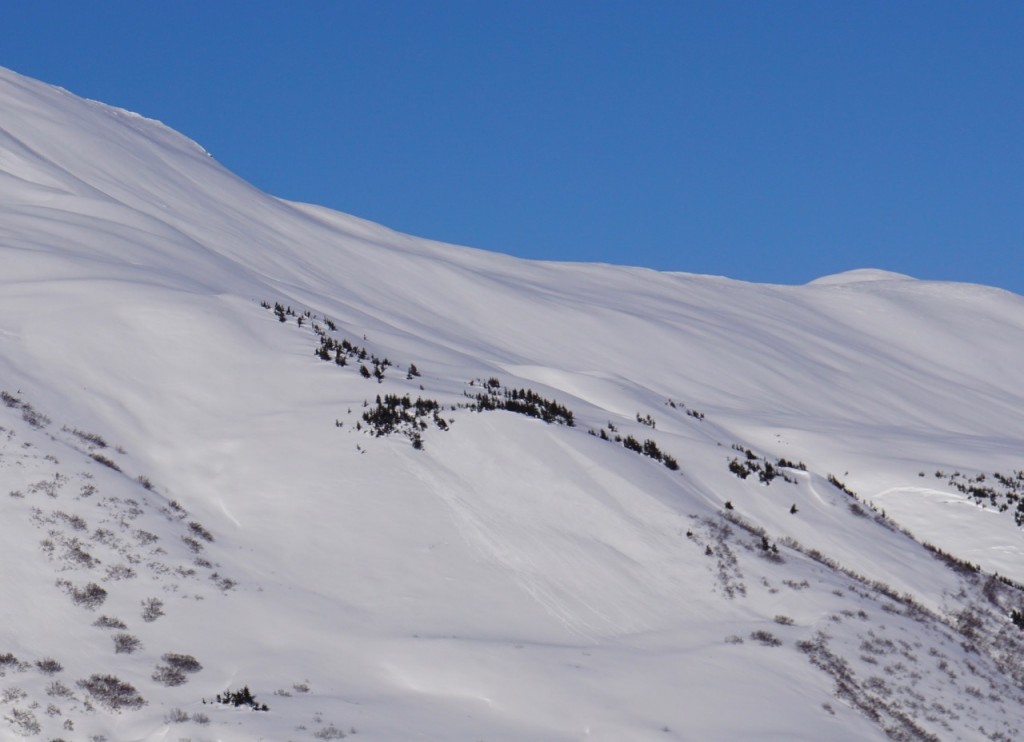 Today will start out mostly sunny with clouds developing throughout the day and a chance for flurries in the afternoon. Tonight will be mostly cloudy with a chance of snow. Tomorrow there is also a chance for snow. At this point this first system doesn’t look to be much of a snow producer. Colder air is forecasted to move over the area on Friday morning and there is a chance that will be combined with some snowfall but likelihood and amounts are not certain. The quote this morning from the National Weather Service is “One can say with high confidence  that several areas of low pressures will move into the Gulf of  Alaska this weekend through the middle of next week, but  confidence is low in the exact track of them.”