A HIGH avalanche danger exists in the Alpine where a person could trigger a large and destructive avalanche in Turnagain Pass and Girdwood. Today’s elevated danger is based on our travel advice: Travel in Avalanche Terrain is Not Recommended. A CONSIDERABLE avalanche danger is present below 2500′ where the snowpack is wet and saturated and triggering a wet loose avalanche on a steep slope or in a terrain trap will have high consequences. Below treeline a MODERATE danger exists where a wet avalanche from above is possible.

Elevated caution and careful snowpack assessment is recommended for Summit Lake where strong winds and new snow have added stress to a thin snowpack. Click HERE to read the most current Summit Lake Summary and HERE for an observation from yesterday.

State of Alaska  Department of Transportation & Public Facilities  Avalanche Closure Notification:  There will be intermittent traffic delays today on the Seward Highway for avalanche hazard reduction work between Girdwood and Portage near mileposts 89 to 83.  Motorists should also expect delays on Portage Glacier Road near mileposts 3 to 5.  Delays of up to 45 minutes between  10:00 AM and 3:00 PM  should be expected.

Yesterday’s stormy conditions caused a variety of avalanche activity at multiple elevations. Several D2’s were seen on Tincan and fresh wet debris was observed in many common slide paths along Turnagain Arm and Portage. In the last 24-hours Turnagain Pass and Girdwood have received over 2’ of new snow in the Alpine, over 2″ of rain below 2000′ combined with strong NE winds. Today an additional 6-12” of snow is expected in the upper elevations and rain below 2000′.

Expect wind slabs to be large and to have high consequences. Triggering a wind slab 2-5’ thick is likely on steep slopes today where top-loading and cross-loading will be a factor on a variety of aspects. A windslab from above could easily entrain wet snow at the mid elevation band and be quite destructive and impossible to escape. Natural activity is possible today, but with winds backing off this morning, the likelihood of natural activity will be decreasing.

Avoid putting yourself at the bottom of a big runout zone and stay off of steep terrain. Should visibility allow for travel into the alpine, keep your slope angles low and minimize your exposure to steep slopes and terrain traps. Shooting cracks may not be present until its too late.

D2 Avalanche on Tincan “CFR” WSW aspect, observerd yesterday around 3pm. This was likely a natural avalanche due to strong winds and increasing temperatures mid day. 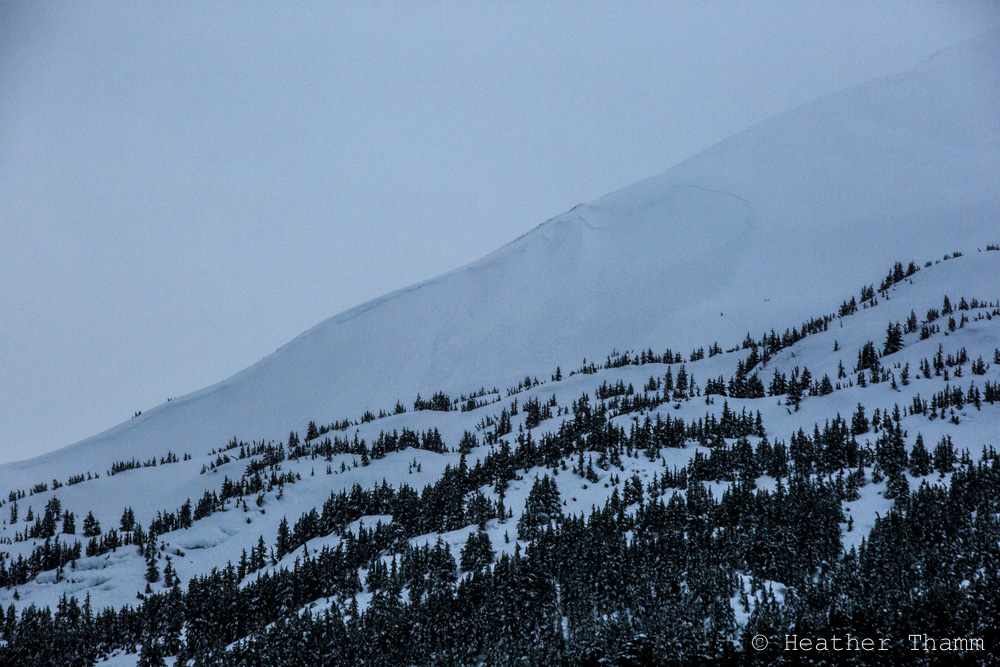 D2 natural avalanche on the NW shoulder of Tincan, ~2600, as seen from the Seward Hwy yesterday afternoon. 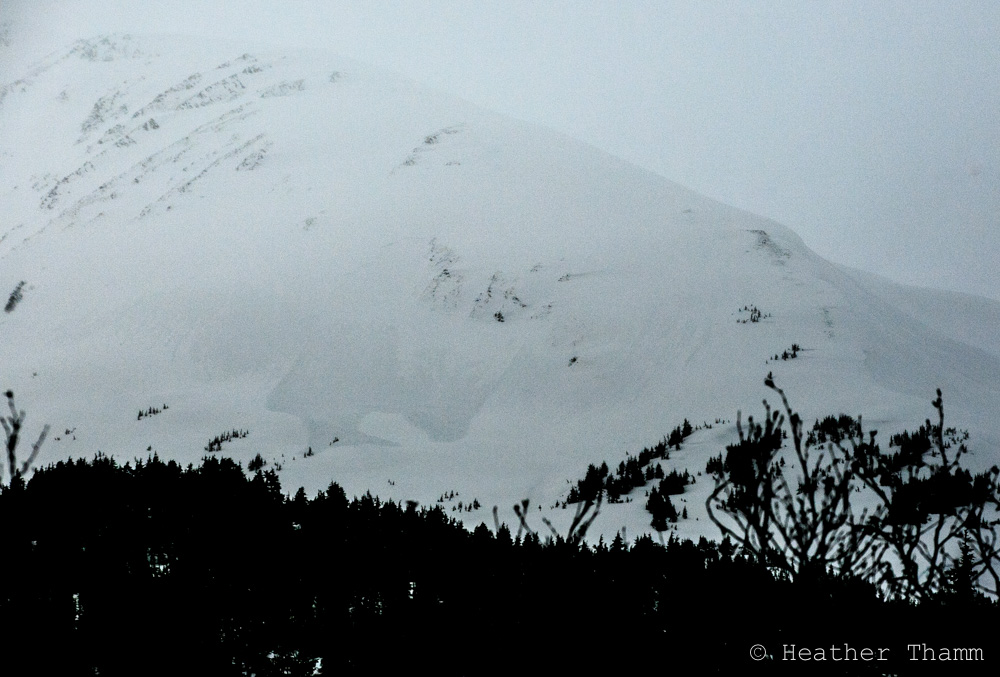 Over 2 inches of rain has saturated the snowpack below 2000’. This hazard will be especially dangerous on steep open slopes where an avalanche from above could easily entrain a large amount of wet snow. Today it will be important to avoid steep runout zones, gully features and steep rollovers. Should you get yourself (snowmachiner or skier) stuck at the bottom of a terrain trap, escaping a wet loose avalanche from above will be impossible.

Glides continue be in the back of our minds today, especially with the addition of a large amount of rain and snow over the last 24 hours. Several glides have avalanched over the last few days and don’t be surprised if a few more go today. Since glide cracks can spontaneously release at any time, they are best to avoid. Poor visibility today will make it harder to see existing glides, but this is one more reason to steer clear of steep slopes.

From 6am yesterday to 7am today Turnagain Pass received a 2.2 € of water, which equals over 2′ of new snow in the Alpine elevation band. Temperatures spiked mid day causing rain to fall as high as 2500′, possibly higher for a few hours. Winds were strong from the NE averaging in the 30-40’s mph most the day with gusts in the 60’s mph.

Today another .5-1 € of water is expected to fall, adding another 6-12 € of snow in the Alpine. Temperatures will spike again mid day causing rain/snow line to reach as high as 2000′. Winds are expected to decline, 10-20mph from the NE.

Showery conditions will persist tomorrow with our first chance of sun and cooler temperatures this weekend.