The avalanche danger is MODERATE today, and it is still possible to trigger an avalanche on weak layers of snow in the upper 3’ of the snowpack. Careful terrain selection remains important, especially avoiding steep terrain that funnels into traps like cliffs, rocks, gullies, or trees. As temperatures warm up in the afternoon, it will also be important to be aware of wet loose avalanches on southerly aspects.

SUMMIT LAKE/SNUG HARBOR/LOST LAKE/SEWARD: Winds are once again expected to be stronger near Seward, increasing the chances of triggering a wind-slab avalanche today.

There have been multiple close calls involving partial burials in Chugach State Park over the past week. There is more info in our observations page (details here, here, and here). Extra caution is warranted if you plan to get out in this area today.

Crow Creek: Another large avalanche was reported on Raggedtop, which makes the third avalanche in the same area in the past two weeks. The avalanche likely failed on a weak layer that was capped by a wind slab, and was triggered naturally. Nobody was caught in the slide. 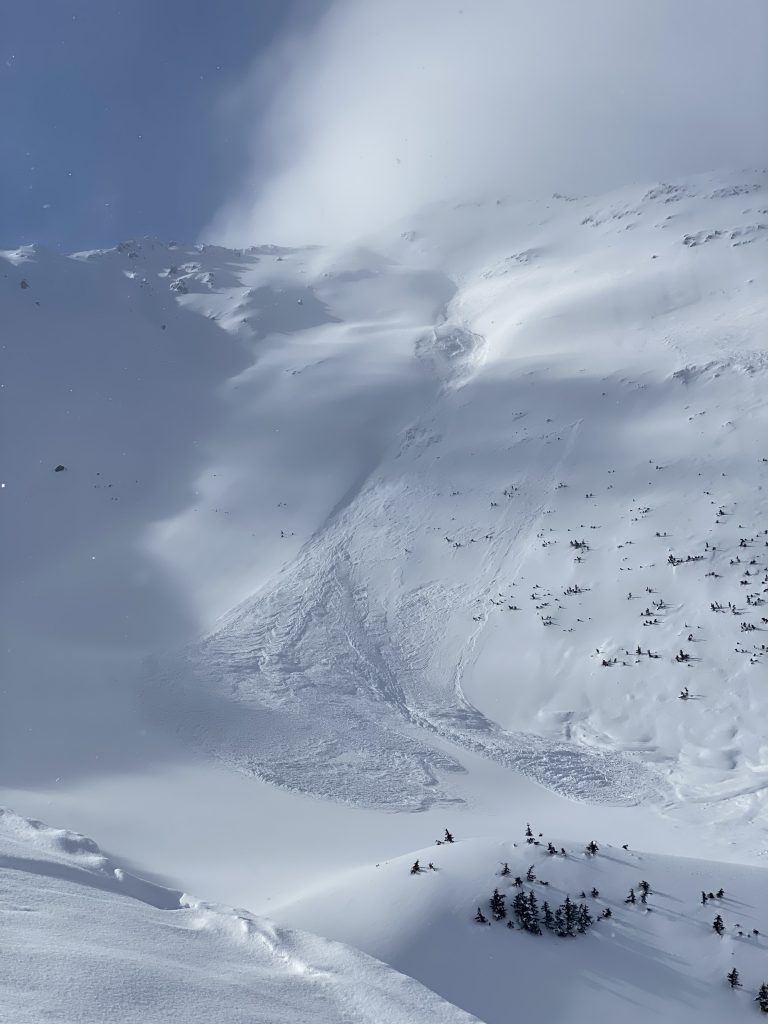 Natural avalanche on Raggedtop, right next to a previous avalanche from 03.26, and overrunning the slide from 03.21. Photo submitted by George Creighton, 04.01.2021

As we head into April, we continue to get reports of slab avalanche activity and other red flags associated with buried surface hoar and facets in the upper snowpack. This kind of activity is a clear indicator that the persistent weak layers that formed and were subsequently buried in March are still reactive, and still need to be considered when traveling in the mountains. These layers require patience and careful terrain selection, which means weighing the consequences of triggering an avalanche on the slope you are considering. For now, the snowpack is really not trustworthy and it is important to avoid steep slopes, especially those with terrain traps like rocks, cliffs, gullies, or trees, or avalanche paths with large, connected start zones. The most suspect slopes will be those that have a stiffer wind slab at or near the surface. Pay attention to clear indicators of instability like cracks shooting out from your snowmachine or skis, or the ‘whumpf’ of a collapse in the snowpack. The calendar may say that it is springtime, but the snowpack is still presenting us with all of the challenges of a mid-winter pack.

Wind slabs: Light to moderate winds overnight have likely created isolated wind-loaded pockets that may be sensitive to triggers today. Be on the lookout in the typical suspect terrain- below ridgelines, convexities, or in cross-loaded gullies.

Loose snow avalanches: Steep slopes that have been sheltered from the wind have around a foot of loose snow sitting on top of firm surfaces. It will be easy to trigger dry loose avalanches (sluffs) today, and they can pick up enough volume and speed to carry a person. If the sun stays out long enough, we will likely see some wet loose activity as well. While it is unlikely they will be big enough to bury you, they can be dangerous if they drag you into terrain traps like cliffs, trees, rocks, or gullies.

Yesterday: Skies were partly cloudy to mostly sunny, with high temperatures in the high teens F at ridgetops to low 30’s F at lower elevations. Winds were out of the west at 5-15 mph, and no precipitation was recorded.

Today: Partly cloudy skies are expected, with high temperatures in the high teens to high 20’s F. Westerly winds at 10-15 mph are expected to calm to around 5 mph later in the morning. No precipitation is expected today.

Tomorrow: Clouds are expected to move in tonight as the weather begins to change. We might see a few flurries during the day tomorrow, with chances of precipitation increasing Saturday night into Sunday morning. Winds are expected to shift towards the south but stay light at 5-10 mph. Expect to see overnight lows in the low teens to 20 F, with daytime highs in the mid 20’s to low 30’s F.