The avalanche danger remains MODERATE. Triggering a slab avalanche in the top few feet of the snowpack is still possible due to buried weak layers. Additionally, an increase in southerly ridgetop winds this afternoon/evening may begin to form small wind slabs in specific areas late today. Pay attention to signs of unstable snow, consider the consequences of the terrain you are in if a slab releases and watch for changing conditions.

SUMMIT LAKE/SNUG/LOST LAKE/SEWARD:  Strong NW winds were over this region on Thursday and triggered some small natural wind slabs. Watch for lingering wind slabs as these may be easy to trigger if they are sitting on weak snow.

No avalanche activity was seen or reported yesterday. The last known avalanche in our forecast zone was a natural 1-2′ slab Thursday on Raggedtop near Girdwood.

Although a potent weather system is entering central Alaska from the Bering today, we will be far enough to the south that it looks to just brush us by. Only a trace to 1″ of snow is expected by sunset (8:49pm!) with a chance for 2-4″ tomorrow. The mountains north of Girdwood may see larger amounts this evening through tomorrow (6-12″). Ridgetop winds will be on a slow rise from the south today and may hit averages near 20mph by 6pm and continue rising into tomorrow with averages near 30mph.

Until we receive enough snow/wind to create a new avalanche issue, we remain concerned with old buried weak layers in the top 3′ of the snowpack. These continue to show enough signs of instability that we can’t forget about them. Hence, there is still a chance a person could trigger a persistent slab avalanche. Here are some things to keep in mind:

Wind Slabs:  With a bump in winds later today, watch for any snow that might get blown into small shallow wind slabs in the high terrain. With the winds from the south and surface crusts on south aspects, it might be difficult for the wind to pick up much snow. However, terrain channeling can cause winds to shift directions and so be sure to watch for any active loading. 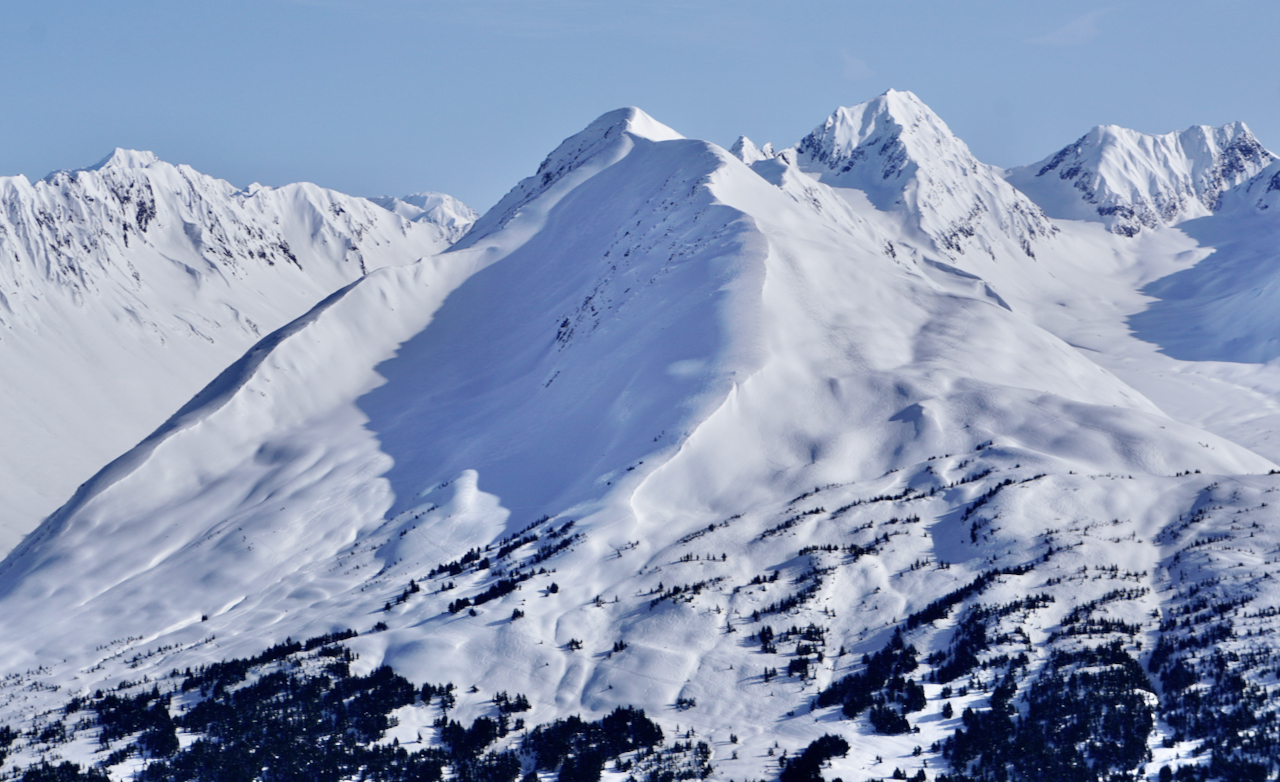 Tincan seen from Seattle Ridge yesterday. It’s a bit difficult to see, but there are many recent tracks in the shade while the sunny slopes sport mostly older tracks. It’s that time of year that we are all playing the aspect. 4.2.21. 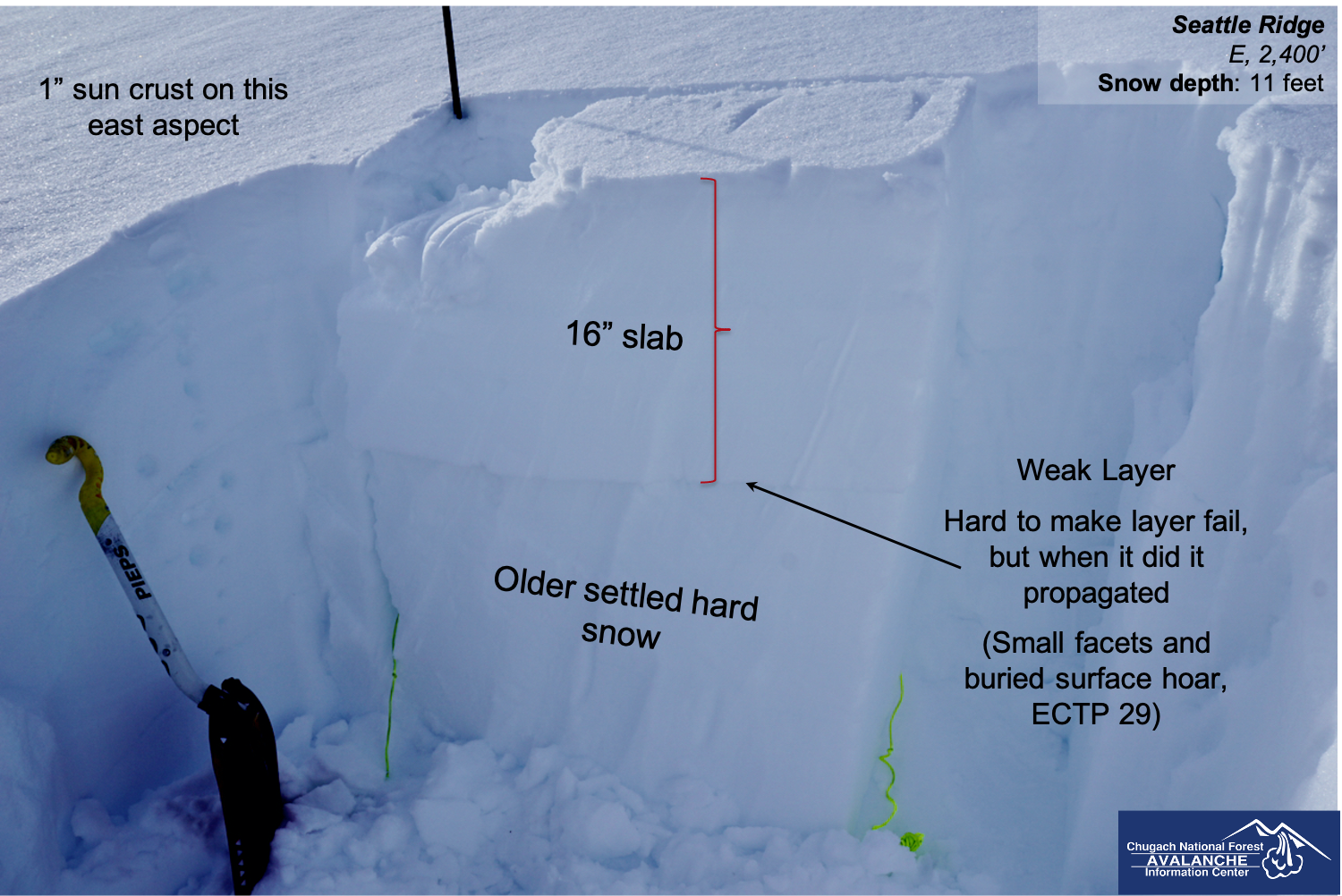 Snow pit on the east face of Seattle Ridge, just north of Repeat Offender slide path. Pit shows a thin weak layer of buried surface hoar and facets 16″ down that took a lot of force to fail, but when it did it propagated. This means the layer is difficult to trigger but could produce an avalanche if it failed. 4.2.21.

Yesterday:  Sunny skies were over the region till around 4pm when high clouds began to filter in ahead of the next weather system. Ridgetop winds were light (5-10mph) from the west and southwest. Temperatures were in the 20’s at the mid elevations and teens in the higher elevations.

Today:  Cloud cover overnight has keep valley bottoms in the 20’sF and cloudy skies will remain through the day. Light snowfall may begin this afternoon with 1-2″ of snow possible by Sunday morning. Ridgetop winds will remain southerly and pick up through the day from ~5mph to ~20mph by 6pm with stronger gusts. Temperatures should remain near the 20’sF at the mid elevations and the teens along the ridgelines.

Tomorrow:  Light snowfall tomorrow may add another 1-2″ around Turnagain Pass and up to 6″ or more in the mountains north of Girdwood. This storm is favoring areas to the north and up to Hatcher Pass. Ridgetop winds will swing southeast and forecast to increase to 20-30mph. Temperatures will warm slightly but snow should fall close to sea level.