The avalanche danger is CONSIDERABLE above 1,000′ on all aspects. Yesterday’s heavier than predicted snowfall with last night’s strong winds will keep all storm snow avalanche problems in the forecast. Wind slabs will be the most likely to trigger and could be over 3′ in depth. It will also be possible to trigger storm slabs (1-2′ deep) and sluffs in the new snow. Cornices have grown, we need to give them an extra wide berth and limit time under them. A cautious mindset is key as the skies start to clear and we head into the mountains. Pay close attention to any signs of instability, including recent avalanches.

The danger is MODERATE below 1,000′, where it will be possible to trigger an avalanche 1-2′ deep in the storm snow.

There were only a couple reports from the mountains during the storm yesterday, one was from John Sykes (forecaster) at Pete’s South and the other from a group in Placer Valley. Both parties reported storm slab avalanches that were easy to trigger. They stayed in the trees due to the stormy weather and avalanche concerns, but in the smaller terrain they could trigger slabs up to a foot deep at Pete’s South and over 2′ deep in Placer Valley where more snow has fallen. 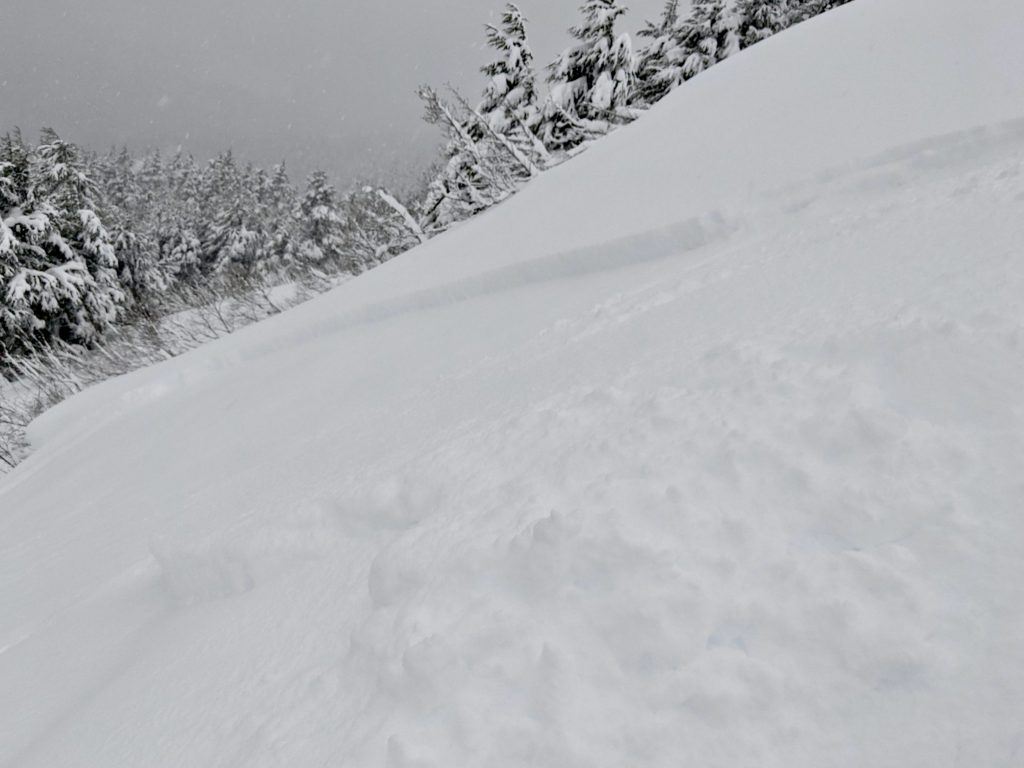 Wow, what a few days of snowfall. Light to heavy snow has been falling since Wednesday afternoon with the highest rates seen yesterday. Snowfall totals over the past 24-hours were 18-24″ for mid/upper elevations in Girdwood and Placer Valleys and 12-14″ for Turnagain Pass. Check out the table below for the storm totals since Wednesday. Ridgetop winds have been fairly moderate out of the east until last night when they took a jump for 6-8 hours blowing 40-50mph with gusts over 70mph. All this new snow with those winds last night will keep storm snow avalanche issues front and center, especially wind slabs!

For all those headed out today- the storm has just ended. We need to ease into terrain and not let powder fever get the best of us. Be sure to pay close attention to slopes with recent avalanches, and the other signs of instability (cracking in the snow around you and whumpfing). The deeper the new snow, the larger the potential avalanche. Safe travel practices are a must. Expose only one person a time, watch your partners, and have escape routes planned. Although the storm snow should be in the process of stabilizing, it can take a couple days.

Wind Slabs:  These are likely to be easy to trigger and could be larger and more dangerous than expected. They could be anywhere from 1-3+ feet deep. Watch for signs of wind effect and steer clear of slopes and cross-loaded gullies with wind loading.

Storm Slabs:  It will still be possible to trigger storm slabs similar to those yesterday on slopes out of the wind, including slopes in the trees. Storm slabs could be 1-2′ deep depending on how much snow fell in the area you are in. There is crust up to ~2,000′ under the new snow and this could slow the bonding in the mid-elevations.

Sluffs (loose snow avalanches):  On slopes out of the wind, expect to trigger sluffs in the new snow. These could entrain a large amount of snow in larger terrain.

Cornices:  Be extra cautious on ridgelines as cornices could be teetering on the brink of failure. They could trigger an avalanche below and potentially put others in harms way. 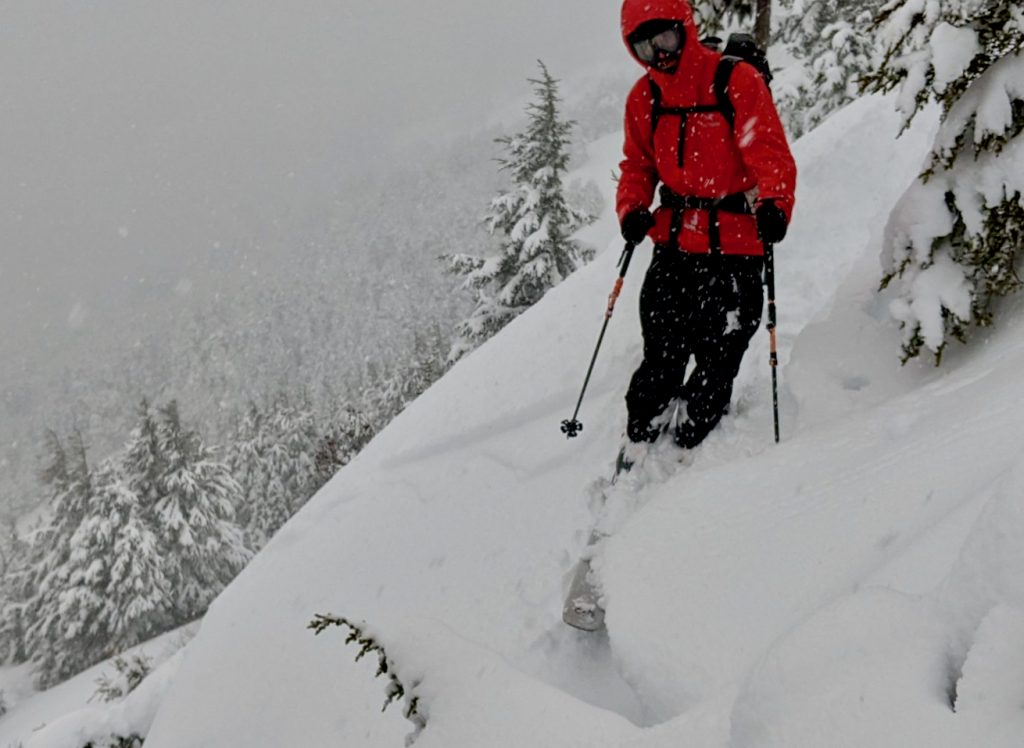 Persistent Slab:  In addition to the storm snow avalanche concerns, there is an outside chance that a person could trigger a larger avalanche on weak snow near the New Year’s crust. This would now be buried 2-6+′ deep. This is a tricky problem with high uncertainty and low likelihood. The only known activity on this layer was a large human-triggered avalanche on Tincan Proper over a week ago (details here). As we head into a clear period and the storm snow stabilizes, we need to keep this issue in our minds.

Yesterday:  Moderate to heavy snowfall across the forecast area. Girdwood/Placer/Portage Valleys saw the higher past 24-hour accumulations of 18-24″. Turnagain Pass was closer to 12-14″. Rain snow line crept up to 200-300′ overnight. Ridgetop winds were easterly, 20-25mph during the day and reaching 40-50mph around midnight with stronger gusts. Temperatures hovered in the 20’sF at the mid and upper elevations with sea level creeping into the mid 30’sF.

Today:  The stormy weather is pushing out this morning and there is a chance for some clearing skies. A trace to no precipitation is forecast. Ridgetop winds have quieted down as well and slated to be 5-10mph out of the northwest today. Temperatures are in the 20’sF at most locations with lower elevations close to 30F.

Tomorrow:  Mostly clear skies are expected for tomorrow and Monday with this break in storms. Ridgetop winds look to be light and variable. Temperatures should be cooling off to the teens and single digits in valley bottoms.