The avalanche danger is MODERATE above 2500′ where it will be possible to trigger a lingering wind slab around a foot deep. Look for signs of recent wind loading on the snow surface and shooting cracks to locate areas that have sensitive wind slabs. Just under the surface there is an icy crust that is making for challenging travel conditions right now. This crust can cause avalanches to run faster and further than normal and could create a sliding hazard if you are knocked off your feet in steep terrain by a small avalanche.

Below 2500′ the avalanche danger is LOW where triggering an avalanche is unlikely.

The winds during the outflow event that took place over the weekend affected some parts of the forecast area more than others. The skiers side of Turnagain Pass has been largely spared from the worst of the winds, with the exception of higher elevation ridgelines. Seattle ridge, Placer valley, and Portage all look like they got stronger winds. In areas that saw strong winds over the weekend we expect that lingering wind slabs up to 1′ deep are still possible for a human to trigger today. With only 3-5″ of new snow above the crust for the winds to transport wind slabs should be isolated and relatively easy to identify. Look for signs of recent wind transport on the snow surface, pillows on leeward terrain features, and shooting cracks to identify wind slabs. Avalanches could run faster and further than normal, especially in steeper terrain, due to the icy bed surface underneath.

The surface conditions are pretty variable right now with a widespread icy crust buried under 3-5″ of new snow, so take care to travel conservatively to help avoid injuries. At lower elevations we found that the melt crust is thinner and more breakable which can make for challenging travel conditions. At higher elevations the crust is thicker, but the new snow overlying the crust makes it difficult to see and predict where you will find a breakable portion of the crust and where it is supportable or very firm (for more details see obs here, here, and here). We have observed this crust up to 4000′ and expect that it extends up to at least 5000′ in elevation.

Loose Dry Avalanches – In steep terrain we have seen evidence of loose dry avalanches (aka sluffs, or point releases) that can pick up speed quickly due to the icy bed surface and entrain the new snow in their path on the way down. These avalanches are not going to be large enough to bury a person, but they could knock you off balance in steeper terrain. 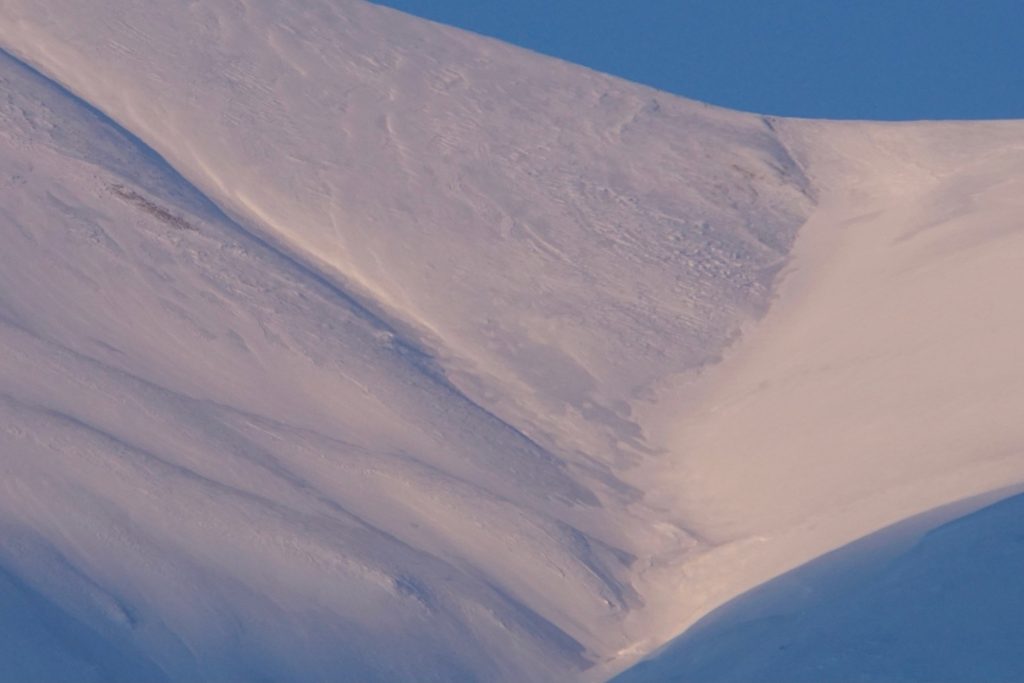 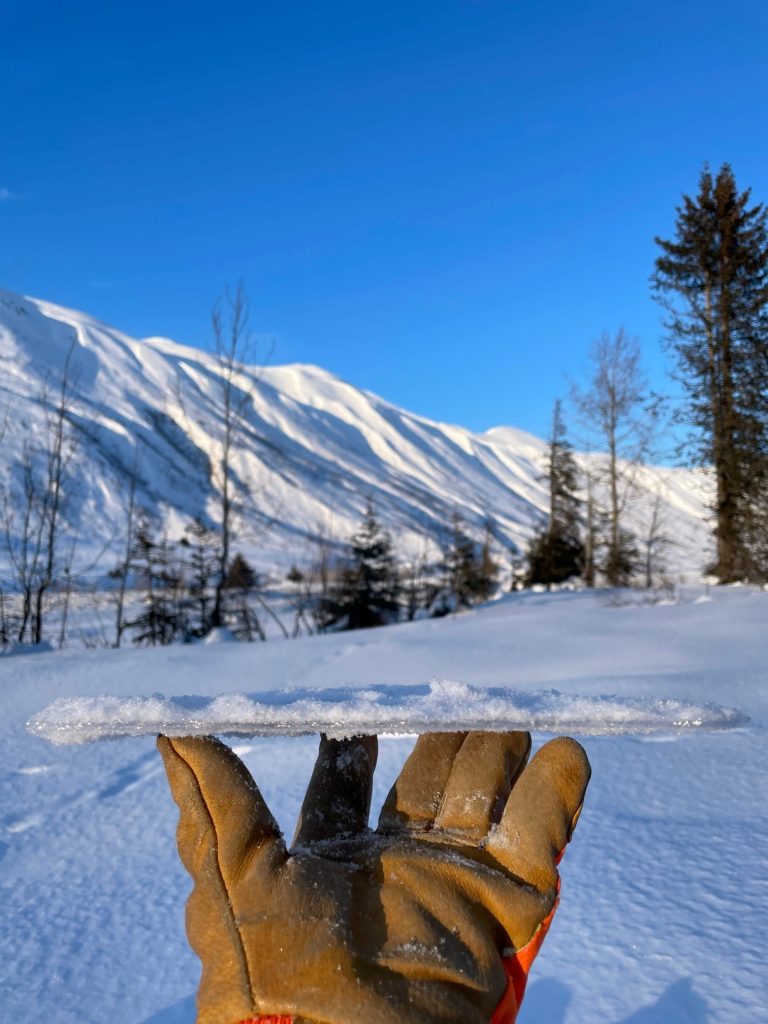 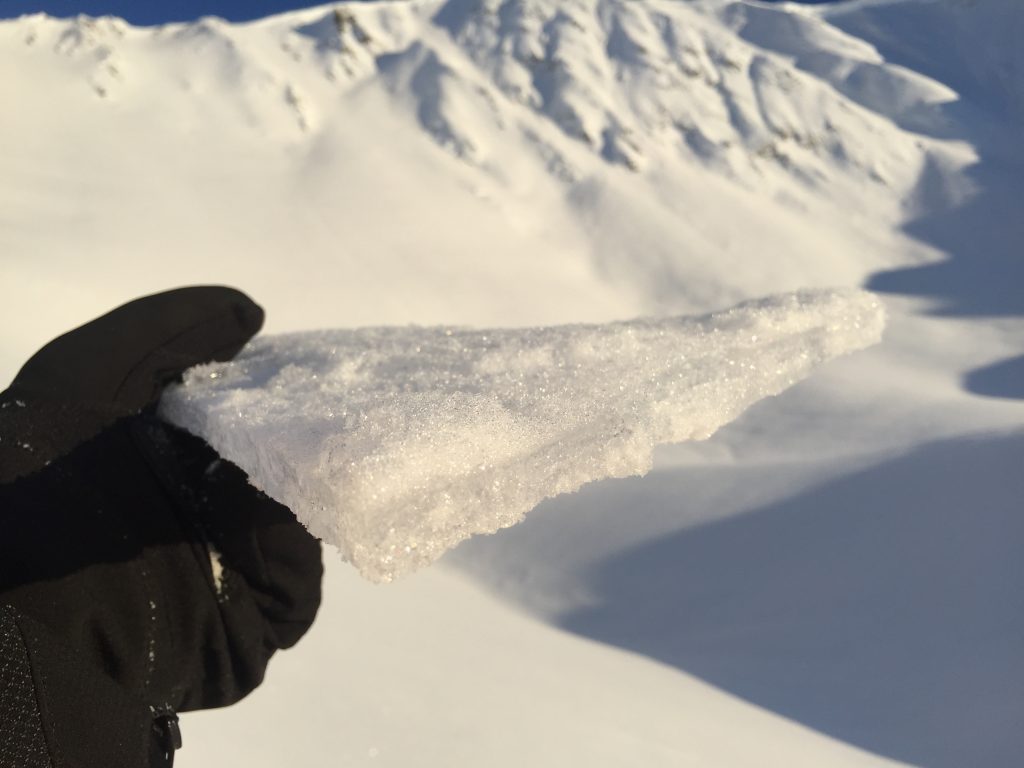 Thicker crust from higher elevations which was part of a layer composed of multiple crusts interspersed with dry snow. Photo Zach Behney 1.2.22

Triggering a larger avalanche on a layer of buried facets 2-4′ deep is still in the realm of possibilities, albeit very unlikely. We are still finding this layer of facets in the 1500 – 3000′ elevation band (see obs here and here for more details). Above 3000′ it looks like the faceted layer over the Halloween crust no longer exists, and in the areas we have visited recently the overall snowpack structure is very strong at these elevations. In areas below 3000′ that have a combination of a thin surface crust and a shallow depth to the faceted layer there is a chance that the layer could produce a large and destructive avalanche (see video for example). Likely areas with a thinner snowpack over the facets include the Southern end of Turnagain Pass, Lynx Creek, and Silvertip Creek.

Yesterday: Temperatures stayed in the negative single digits yesterday with clear skies. Winds were variable across the forecast zone. In Turnagain Pass they stayed light and were only transporting small amounts of snow at ridgelines. In other parts of the forecast area more exposed to typical gap winds they were stronger and caused more widespread snow transport.

Today: Another cold and clear day with calmer winds out of the E in the 0-10 mph range. At lower elevations in typical wind gaps there could be stronger gusts. Temperatures look to stay in the negative single digits.

Tomorrow: Tomorrow through Friday look largely similar to today. The temperatures may warm up a few degrees later in the week. Wind directions will shift between E and NW but look to stay light. The next possibility for snowfall looks like Saturday.