The avalanche danger remains MODERATE above 2,500′ on slopes that have been wind loaded by last weekend’s winds. Triggering a lingering wind slab, up to a foot thick, sitting on a slick crust will be possible. These slabs are scattered around the Alpine terrain and should be fairly easy to spot and could look like large wind drifts.

The danger is LOW below 2,500′ where triggering an avalanche is unlikely.

Brrrr…. It’s a cold day out there… -10 to -20F in valley bottoms and just above 0F along ridgelines. The Granite Ck weather station near the Johnson Pass trailhead is reading the coldest this morning at -26F. The good news is the winds are calm. They have been relatively light from the north and east for just over a day now and should remain light and variable for the next several days.

Lingering wind slabs sitting on a crust are the main avalanche concerns for anyone headed out. We can expect them to be scattered about in the Alpine terrain. They formed when last weekend’s winds blew around 3-5″ of snow that fell on Friday. Slabs should be on the smaller side, from a few inches thick to possibly a foot. They could still be a bit touchy and run further than expected as they are sitting on a crust formed over the New Year. Watch for signs of wind deposited snow and cracking in the snow around you. 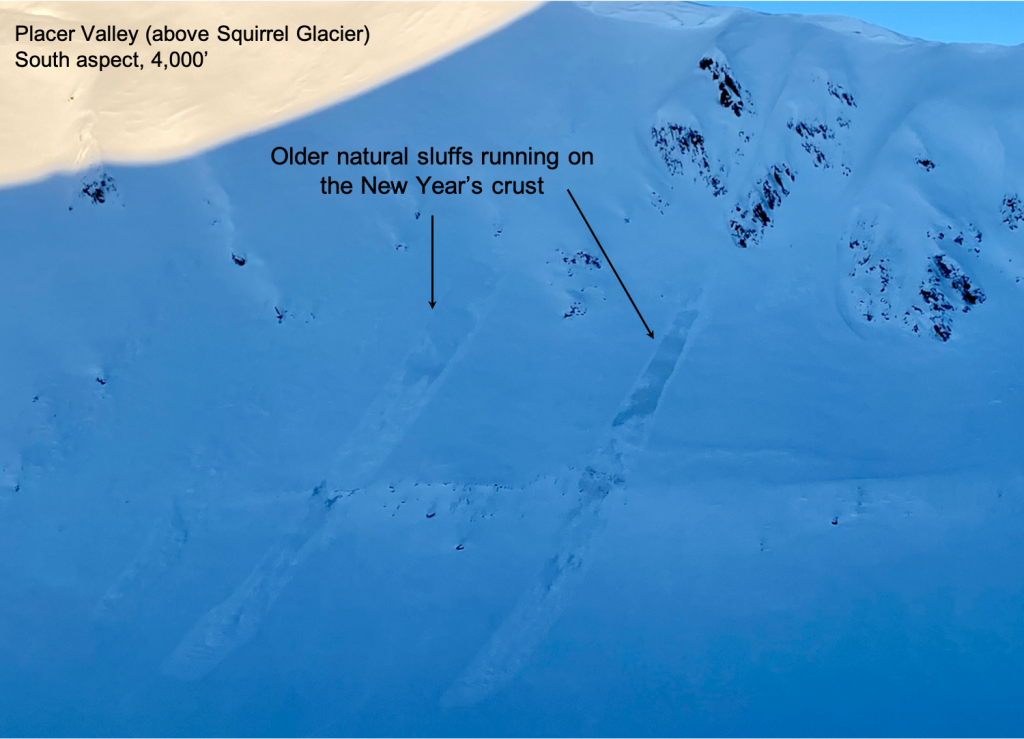 Example of that darn crust at the higher elevations. These sluffs were likely triggered by the winds over last weekend. Photo taken Sunday, 1.2.21.

On steep slopes with enough loose snow sitting on the crust, it may be easy to initiate a shallow sluff. These could also run further than expected but should remain small with the meager snow amounts available in general. That said, the New Year’s crust is creating some challenging travel conditions right now. The crust is quite variable in thickness (.5 – 1.5″ thick) and can be breakable in one place only to be stout and unbreakable in another. It’s covered by a few inches of windblown snow where it hasn’t been scoured or loaded. We found it all the way to 4,000′ in the Placer Valley area, which matches observations elsewhere, and as John said yesterday, we suspect it to extend to most ridgetops.

How the surface conditions evolve this week will be important in anticipation of the next snowfall. The New Year’s crust and any weak snow that sits on top of it will be a big factor in how well the next layer of new snow bonds, or doesn’t bond. Avalanche conditions could get quite interesting once the snow starts falling again, which could be this weekend. 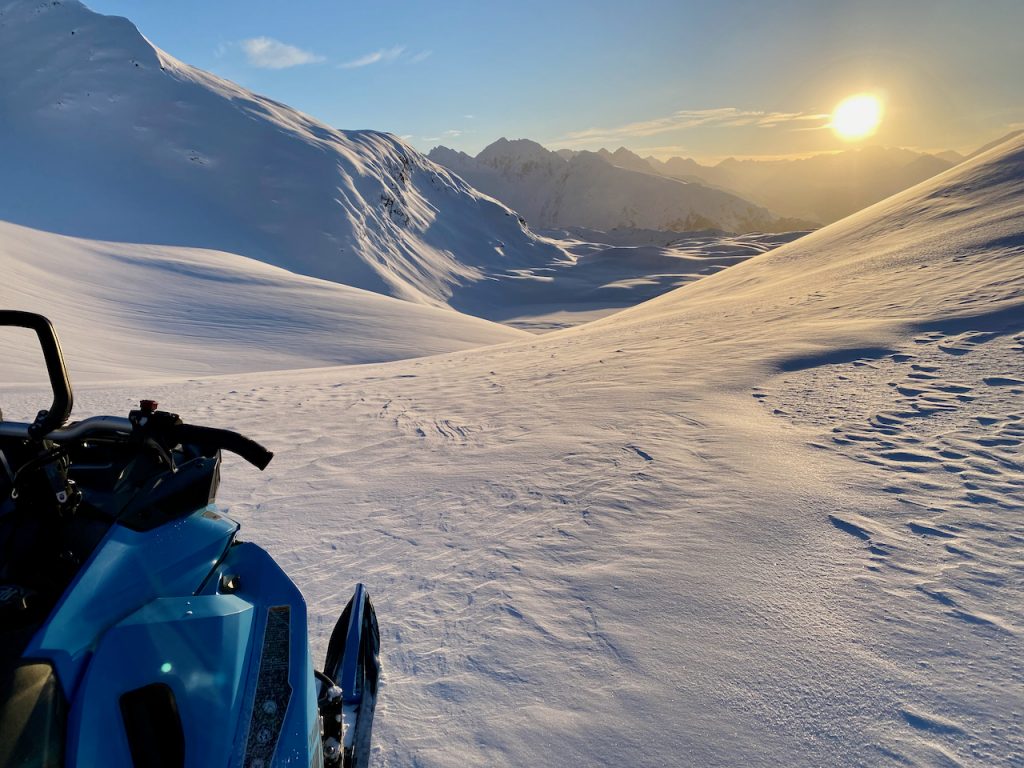 Looks good from afar, but far from good…! Looking south over Squirrel Flats and Comet Peak on the left. Snow conditions were 4-5″ of loose snow over a breakable crust all the way to 4,000′.

We are continuing to track the layer of November facets that sit 2-5+ feet deep in the snowpack. This layer is most pronounced in the mid elevations where the old Halloween crust exists under the facets. The facets are continuing to show signs of hardening and bonding and the slab on top is now capped with the New Year’s crust. Although triggering an avalanche in this layer is very unlikely, it’s always good to keep an eye on buried faceted snow.

Yesterday:  Clear skies and cold weather were over the region. Temperatures in valley bottoms were in the minus single digits and near 0F along ridgelines. Winds were generally light from the east along ridgetops.

Today:  Another clear and cold day is on tap. Valley bottoms temperatures are between -10 and -20F and have hit -24F at the Johnson Pass trailhead. Ridgetop temperatures are closer to 5-10F above as an inversion is in place. Winds are forecast to remain light from the east along ridgelines.

Tomorrow:  Clear and cold weather along with light winds should continue through the week. Weather models are hinting at what looks like a chance for snow and warmer temperatures this weekend. Stay tuned.