The avalanche danger remains MODERATE on all aspects above 1,000′. Triggering a wind slab avalanche, up to a foot thick, will be possible on slopes that saw wind loading yesterday or may see active loading today. Small shallow sluffs will also be possible to trigger on steep slopes. Even a small wind slab or sluff could run further than expected due a crust that sits underneath.

The danger is LOW below 1,000′ where triggering an avalanche is unlikely.

SUMMIT LAKE / LOST LAKE:  Strong NW winds impacted the Summit Lake area yesterday and may again today. Watch for wind slabs on leeward slopes. These also are likely to be sitting on a crust.

The ground blizzards in Girdwood were pretty ominous for what the mountains would be like during the northerly wind event yesterday. Sure enough, there was plenty of snow pluming off the the Western Chugach range, along Turnagain Arm (gap winds), along the western Kenai Mountains, Summit Lake, Seward, etc. Despite all this, Turnagain Pass itself looks to have escaped the majority of the damage. Although there was still plenty of wind to move some snow in Turnagain, especially on the Seattle Ridge side, we had no reports of avalanches and did not see evidence of any wind slabs that released from the ridgelines that can be seen from the road.

A big part of this is that there is just not much snow available for transport. Only 3-5″ of snow from Friday that is sitting on a crust to ridgetops. One report from Seattle Ridge yesterday described the snow surface as a mix of ‘polished up crust and wind drifts’. However, the non-motorized side of the Pass appears to be in a bit better shape. The NW winds have died off, but not completely. The forecast is for 10-20mph so some continued wind effect is possible today.

If you are headed out in search of some sheltered ‘dust on crust’ conditions, it should be fairly easy to suss out where the winds have been blowing and where slabs could be lurking. Watch for changes in surface texture, the most obvious being a wind pillow, drift, or larger wind loaded area intermixed with scoured crusts. Also look for cracking in the snow around you. Winds made it into the trees, so keep an eye out for slabs in these areas as well. Slabs should be fairly small in general unless getting into the bigger terrain where they could be up to a foot thick. On steeper sustained slopes, keep in mind even a small wind slab could run fast and far as debris will be sliding on a crust. 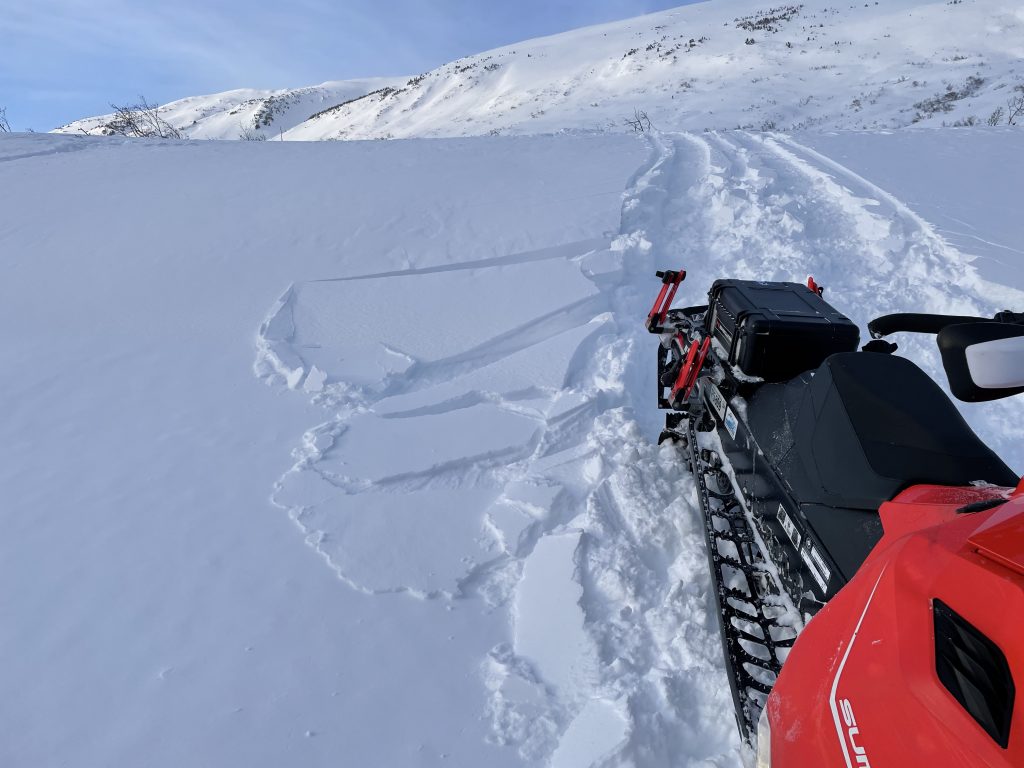 Cracking in a shallow wind slab near treeline on the front (road) side of Seattle Ridge near the up-track. Photo by Troy Tempel, 1.1.22. 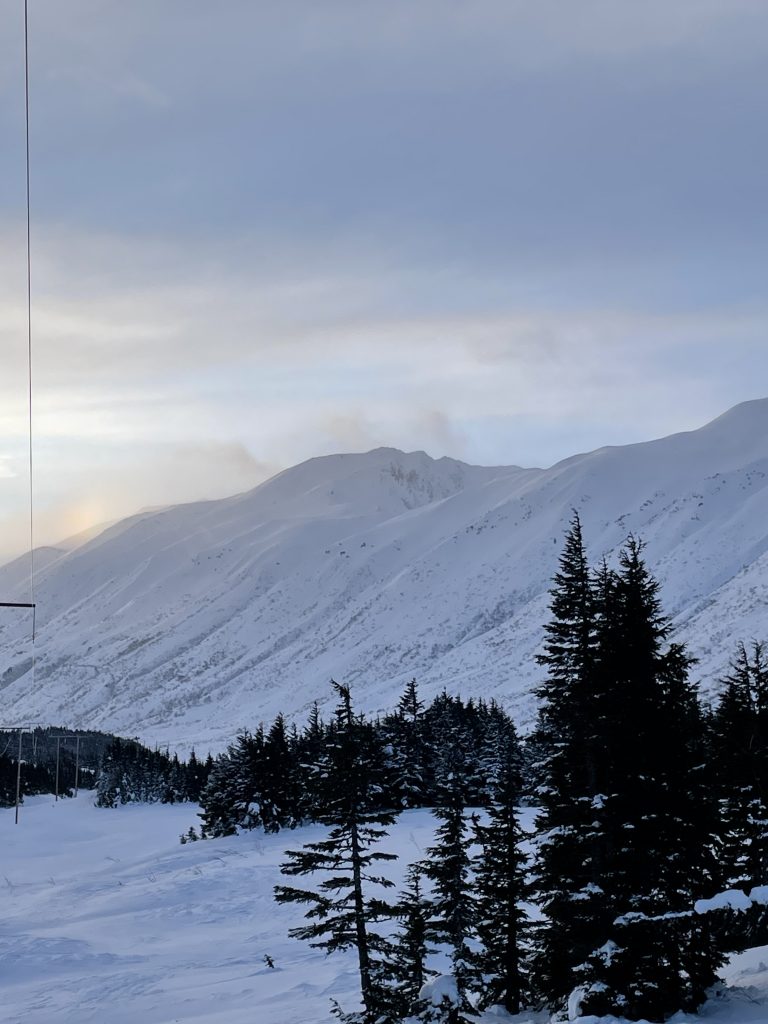 Wind transport along the southern end of Seattle Ridge yesterday due to the channeled NW winds aloft. Photo Troy Temple, 1.1.22. 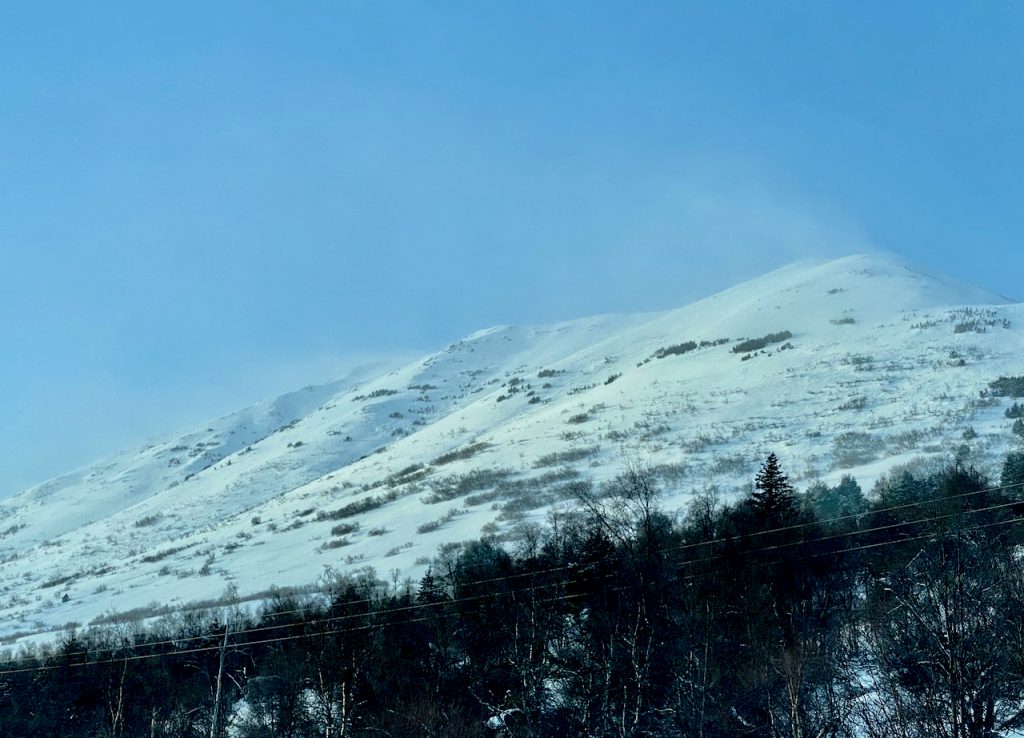 Loose snow avalanches (sluffs):  Shallow sluffs could be easily triggered on the steeper slopes. As with the wind slabs, debris may run faster and further than expected due to the crust.

We are continuing to monitor those old November facets that sit under a dense slab of snow anywhere from 2-5′ thick; thicker on the north end of Turnagain and shallower on the south end. At elevations between ~1,200′ to ~3,000′ the facets sit on top of the Halloween crust. With the top of the snowpack now frozen from last week’s warm weather, changing the character of the slab and making it even more difficult for a person to impact this faceted layer, triggering a large slab avalanche is now very unlikely.

This problem is becoming what we call ‘dormant’ until there is a major change in the weather/snowpack to reactivate it again. This could be a big storm cycle, or the spring melt season.

Yesterday:  Partly cloudy skies, light to strong NW winds, and cold temperatures were over the region. The NW outflow winds averaged 5-15mph at Turnagain Pass, but as high as 30mph to the north, west and south of Turnagain. Temperatures dropped to the single digits is most locations.

Today:  Partly cloudy skies are forecast again today with the NW winds in the 5-10mph (some areas seeing up to 20mph). Temperatures are still falling and are -10 to 0F along ridgelines and the 0 to +10 in valley bottoms.

Tomorrow:  Mostly sunny skies, light variable winds and cold temperatures are expected for Monday and most of next week.