A generally  LOW  avalanche danger exists across all elevations bands for the Turnagain area. Low danger does not mean no danger.  Watch for wind affected snow where an isolated wind slab may release on a steep terrain feature. Glide cracks are creeping open and may avalanche without warning. Limiting/avoiding exposure under them is prudent. Give cornices a wide berth and watch your sluff.

SUMMIT LAKE / JOHNSON PASS / LYNX DRAINAGE:  Keep in mind buried weak layers exist in the middle and base of the snowpack. More potential for triggering a large slab avalanche exists in this zone. Choose terrain wisely and please read the Additional Concerns below.

Check out our calendar  for upcoming avalanche classes and events in January! Lots of opportunities with all the avalanche education providers in the area.

Yesterday a group found ‘touchy wind slabs’ on a Southeast aspect of Seattle Ridge near Bertha Creek Campground. These hard slabs were 3-10” thick, and formed on top of loose faceted snow and surface hoar that hundreds of people have been skiing and riding on this week. Moderate Northwest winds have channeled through some terrain in our forecast zone, but not all. Many folks have continued to get into steep terrain without incident  where snow conditions remain generally stable. These reactive wind slabs are an example of unstable snow that can be found on some terrain features. Today will be the last sunny day before a big weather pattern shift. If you’re headed into the mountains identify wind-affected snow that looks smooth or pillowed. Hard supportable snow that sounds drum-like should be suspect and could allow a person onto it before a slab releases.

Practice safe travel habits, such as exposing one person at a time, watching your partners and grouping up in safe zones. These are key ways to minimize risk. Ease into steep terrain and factor in the consequences should you encounter a wind slab or one of the following: 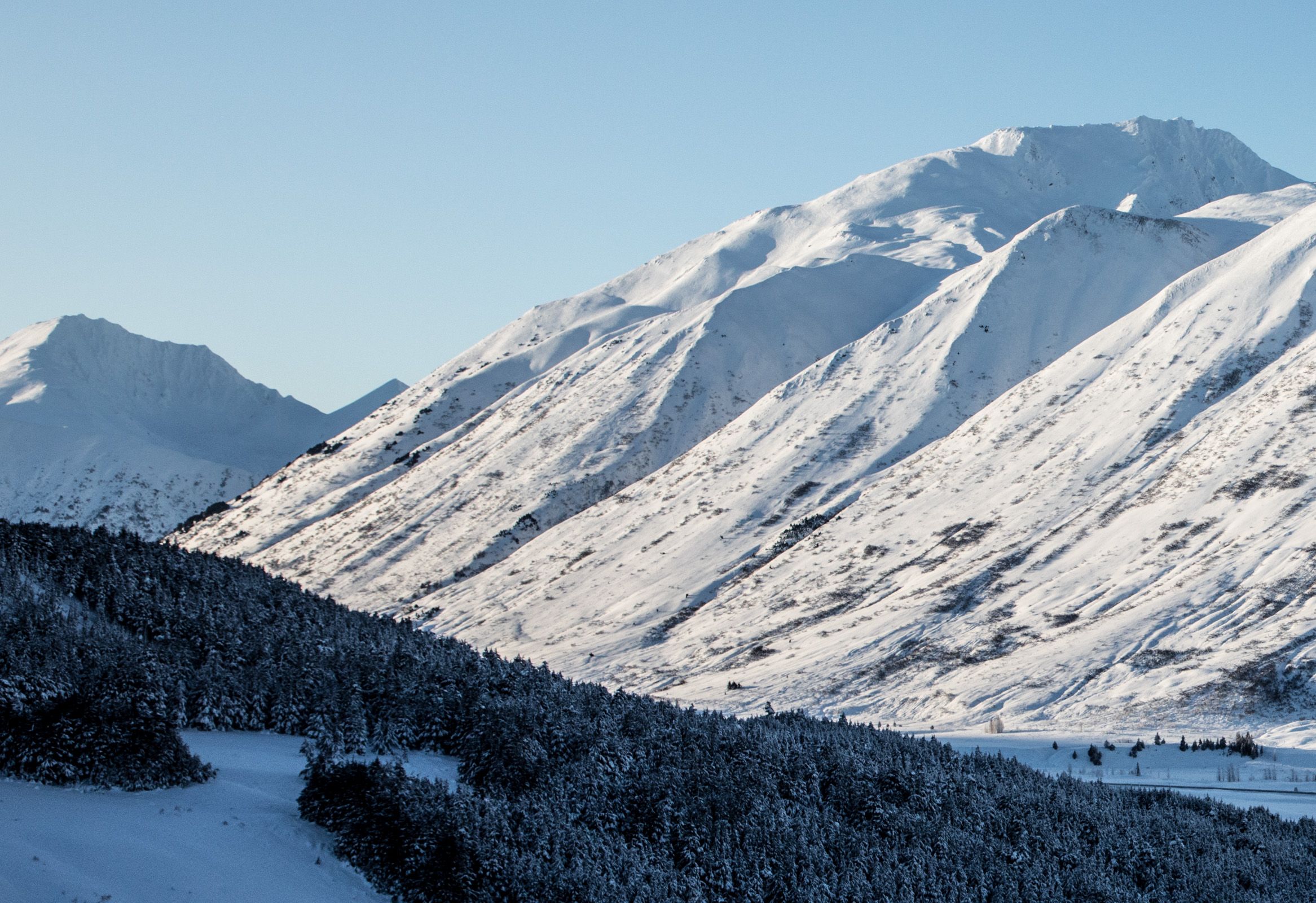 Looking South from Center Ridge yesterday. The terrain in the Sun, SE shoulder of Seattle Ridge remains suspect for reactive wind slabs. This is a common area affected by NW wind direction. 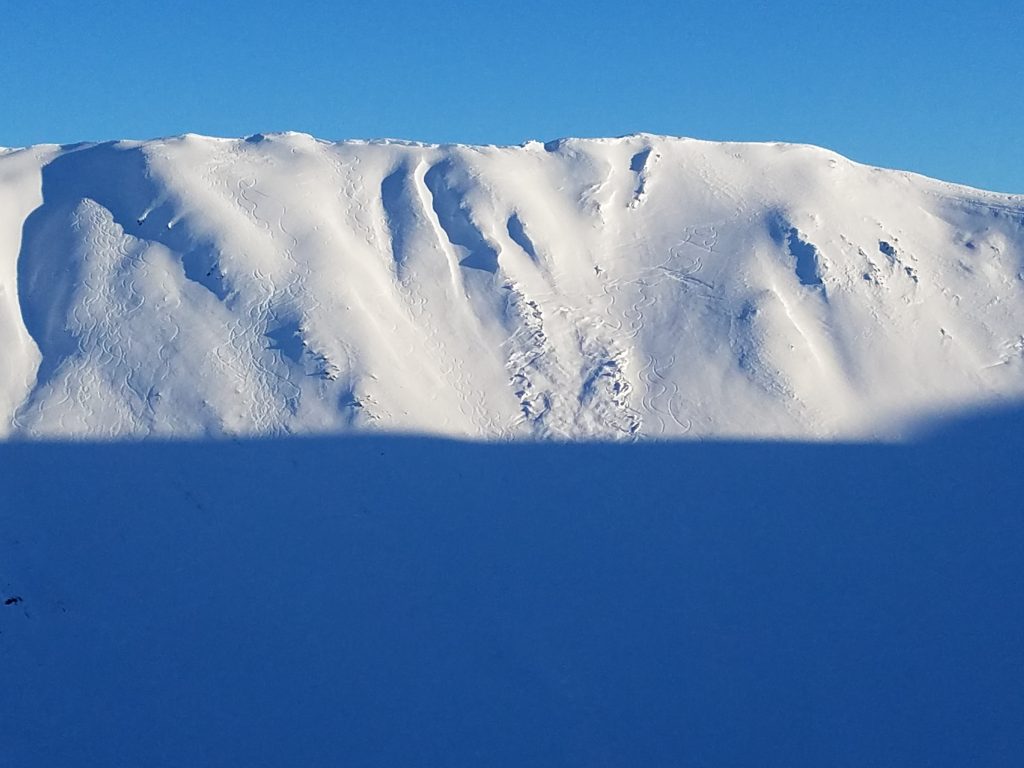 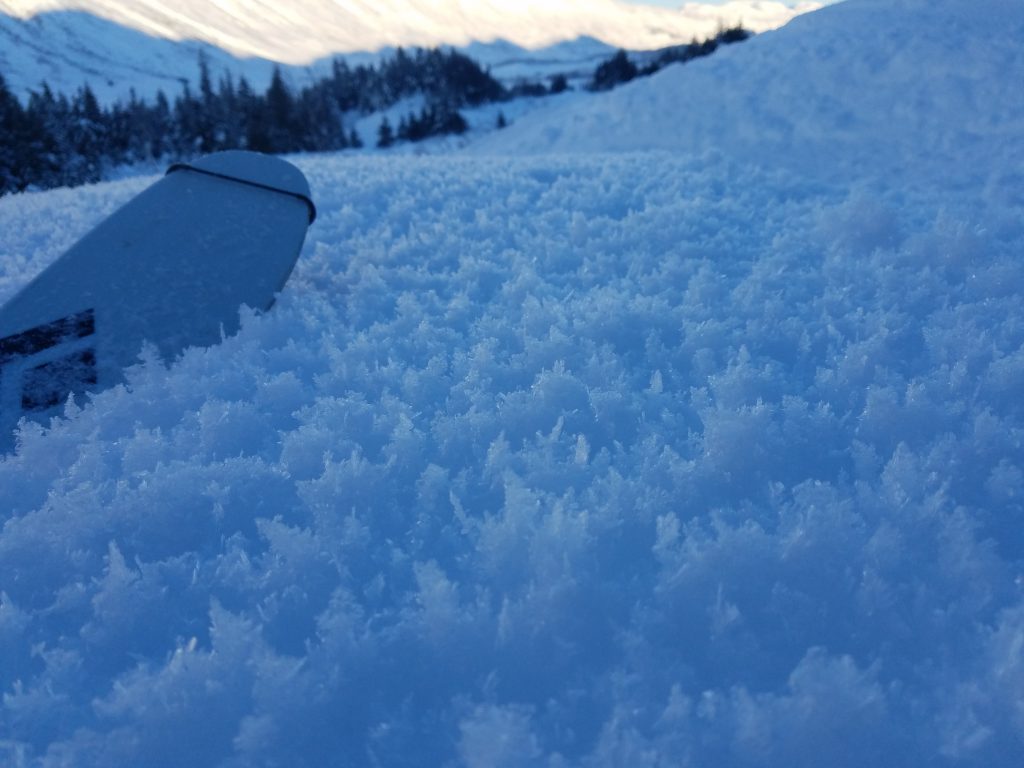 South of Turnagain – Lynx Creek/Johnson Pass/Summit Lake zone:  A poor snowpack structure exists in these areas. The buried surface hoar that we have been talking about over the past week has been found as well as facet/crust combinations in the bottom of the snowpack. The last avalanche cycle was during the New Year’s storm, and overloaded a variety of these weak layers in Summit Lake. Cold weather this weak has been helping stability around the area, but localized NW winds this week may have added additional stress. Steep slopes without old debris below remain suspect. If you’re headed this way, the snowpack becomes more complex – evaluate terrain exposure and the snowpack as you travel.

Yesterday: Skies were clear and sunny and temperatures in the alpine dropped to around zero F. Temperatures in the mid elevations remained in the single digits, but some areas like Portage Valley were closer to -10F. Ridgetop winds were light from the Northwest, 5-15mph. No precipitation occurred.

Today: Expect similar conditions, mostly sunny skies and sub zero F temperatures. Ridgetop winds are expected to remain light, but will shift from a SW direction to an Easterly direction in the evening. Cloud cover is also expected to move across our region this evening along with rising temperatures in anticipation of a pattern shift. Light snow showers are possible overnight.

Tomorrow: Low Pressure will be pushing the cold arctic air north as a series of storms track into our region. Temperatures will continue to rise through the weekend to above freezing temps in the lower elevations by Sunday. Easterly winds will build early Saturday morning and intensify by the evening. Expect precipitation to start out as snow, but rain is likely overnight in the lower elevations.