The avalanche danger continues to be  MODERATE  above 1500′ in the periphery of the forecast zone, such as Girdwood Valley and South of Turnagain Pass. Triggering a hard slab avalanche 2-4 feet thick remains a possibility and may be triggered remotely.  A generally  LOW  danger exists in the core zone of Turnagain Pass where triggering this type of avalanche is trending toward unlikely.  Pay attention to afternoon warming and give cornices a wide berth.

If daily warming and radiation break down a stout crust below 1000′ the danger could rise from LOW to MODERATE on Southerly aspects in the afternoon in this elevation band.

It has been over two weeks since the last snowfall, 9 days since a strong wind event ended, and 8 days since the last human triggered avalanche. With little in the way of weather to contribute to avalanche danger the chances for triggering an avalanche are becoming unlikely. However if someone finds an unstable slope the size of the avalanche could be large and destructive. This scenario doesn’t fit neatly into the danger scale and we still recommend evaluating snow and terrain carefully and identifying features of concern.  Northern to Eastern aspects are the most suspect for harboring a generally thinner snowpack. This poor structure is the most pronounced in the periphery areas of Girdwood Valley and the South end of the Pass towards Johnson and Lynx Creek and Summit Lake. Terrain in the core Turnagain Pass zone is trending towards LOW danger, meaning triggering a slab avalanche is unlikely – but not out of the question.

The slabs in questions are hard slabs 2-4′ thick. The weak layers in question were formed in January and are various layers of facets and buried surface hoar. Stability tests this week have been trending towards good stability in the heart of our forecast zone. The one exception being Girdwood where observers experienced a large collapse on Thursday near Goat Mountain. Without any notable weather changes to tip the balance we remain in a low probability, high consequence situation where multiple tracks could be present on a slope before someone finds a trigger point and the slope releases. These trigger points are often in thinner areas of the snowpack near rocks or in scoured areas along ridges. Evaluate the terrain for consequences before committing to a slope and practice safe travel habits to minimize exposure in avalanche terrain.

Sunshine:
If the sun shines in full force today be aware of warming later in the day on Southerly slopes. Especially steep southerly slopes with rocks that will help heat up the snow around them, aiding in possible wet avalanche activity. As we gear up for a weekend of sunny skies, keep the afternoon warming on your radar! Yesterday several ice climbers reported a stout crust breaking down and becoming unsupportable by 4pm in the afternoon on Southern aspects just below Treeline near Hope Wye.

Deep Persistent Slab is challenging to fit into the danger scale when stability is increasing due to their potential size and already low probability of triggering.

A natural on a NE aspect of Frenchy Mountain, near the Hope Wye, was noticed yesterday and its unknown how recently this occurred.  Although this is just outside of our core advisory zone, it is a good example of a thin NE aspect that may still harbor unstable snow on the Southern end of Turngain Pass. 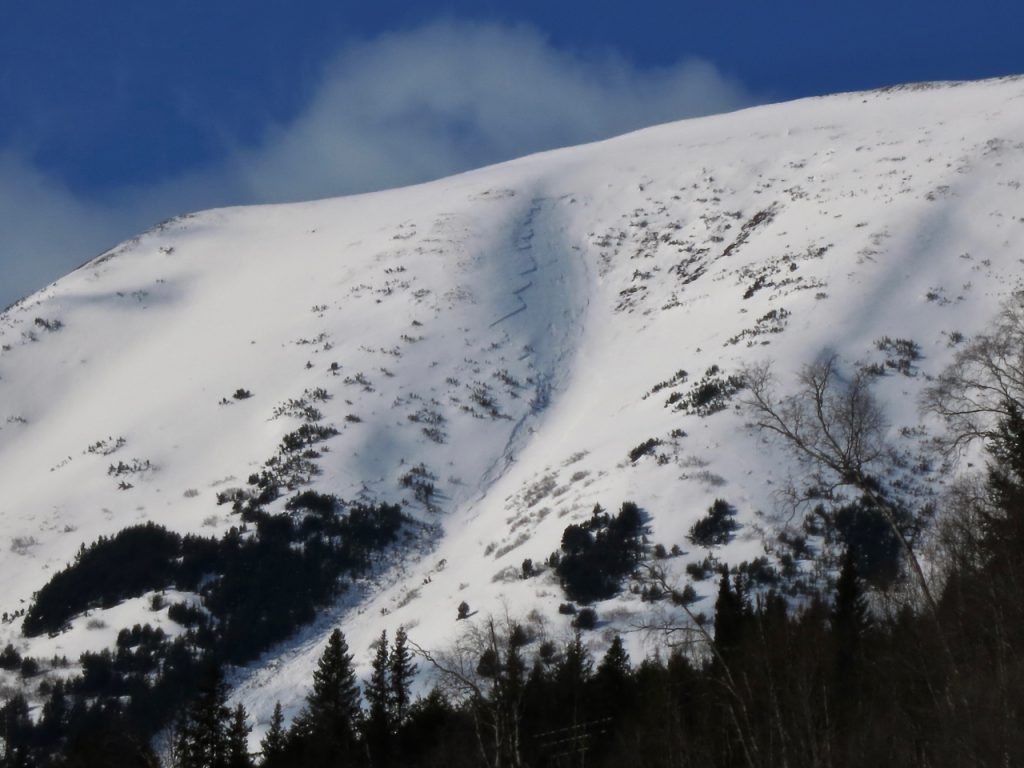 Yesterday several groups of students in an avalanche class found poor structure on Pete’s South, Magnum, and Eddies but did not get any notable failure in their stability tests. 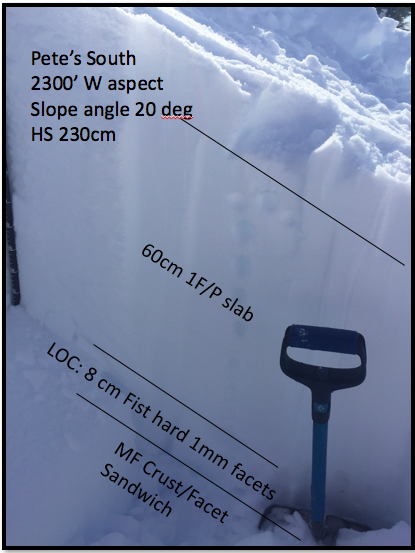 Cornices are large in many places. As we head into warmer, sunnier weather remember this can help de-stabilize them. As always, give cornices plenty of space and limit exposure underneath them.

Yesterday skis were clear and sunny most of the day. Daytime high temperatures near sea level reached the upper 30F’s and overnight dropped to low 20F’s.   Ridgetop temperatures were much cooler remaining in the teens to low 20F’s. Westerly ridge top winds were 5-10mph.   No precipitation recorded.

Today clear and sunny weather is on tap. Daytime temperatures may reach the upper 30F’s near sea level and low 30F’s near ridge tops. Overnight lows will be in the low 20F’s to teens near ridge tops. Northwest winds may range from 5-15mph. No precipitation is expected.

Tomorrow looks similar and clear skies are expected through Monday. Daily warming could increase into mid-30’s tomorrow afternoon in the upper elevations. Nighttime low temps are expected to drop into the low 20F’s again. Northwest ridge top winds may pick up to Moderate on Monday into Tuesday.