A generally  LOW  avalanche danger exists in the core zone of Turnagain Pass, while areas on the periphery continue to trend from a  MODERATE  danger to a LOW danger. Triggering a hard slab avalanche 2-4′ thick breaking in old buried weak layers is unlikely, but not impossible. Areas of most concern are above 2,000′ and in shallow snowpack zones such as Girdwood Valley and South of Turnagain Pass toward Johnson Pass and Summit Lake. Pay attention to afternoon warming and give cornices a wide berth.

SKOOKUM VALLEY is closed to motorized use as of today, April 1st, due to the National Forest Plan. The boundary extends East of the Railroad tracks from Luebner Lake (South) to private property boundary (North). The rest of the Placer River Valley remains open. Click  HERE  for a map and more details.

March has slipped by already, Easter Sunday is here along with April Fools’ Day and sunset tonight will be around 8:45pm. For anyone that has been out in the mountains lately, the snowpack is getting more and more tired; like a runner in the final mile of a marathon. Almost three weeks have passed since the last snow event. A refresh is needed, will it come? Possibly later this week, we’ll have to wait and see. What about springtime corn skiing? Sunshine has been strong but air temperatures have not been warm enough during the day to let it soften Southerly surface crusts. Slightly warmer temperatures today could help this.

There has been no weather for over a week that has contributed to avalanche danger and the snowpack continues to stabilize. The chances for triggering a deep slab avalanche are becoming more unlikely as the days go by. However, if you’ve been tuning in, you’ll know we have a very poor structure to the pack. Various weak layers sit 2-4′ below the surface and are composed of facets and buried surface hoar. There has been no known avalanche activity for 10 days and stability tests show high strength in the snowpack despite the poor structure. This all said, the mountains by nature are uncertain and our snowpack does have weak layers. There is the remote possibility someone could find just the wrong spot on just the wrong slope and trigger a large and destructive slab avalanche. This scenario doesn’t fit neatly into the danger scale as it is a low probability, high consequence situation.

What to keep in mind:

–  Periphery zones such as Girdwood Valley and the South end of Turnagain Pass towards Johnson Pass, Lynx Creek and Summit Lake all have thinner snowpacks and therefore are more suspect for finding an outlier slab avalanche
–  Northern to Eastern aspects have a generally thinner snowpack
–  T

rigger points are often in thin areas of the snowpack near rocks or in scoured areas along ridges
–  As always, p
ractice safe travel habits and minimize exposure in avalanche terrain

Sunshine:
Be aware of warming later in the day on Southerly slopes, especially steep southerly slopes with rocks that will help heat up the snow around them, aiding in possible wet avalanche activity. As we gear up for a warmer day today, keep the afternoon warming on your radar!

Deep Persistent Slab is challenging to fit into the danger scale when stability is increasing due to their potential size and already low probability of triggering.

Suncrust is having a difficult time softening on Southerly aspects. This particular crust was found around 2,500′ by Allen Dahl on Corn Biscuit. 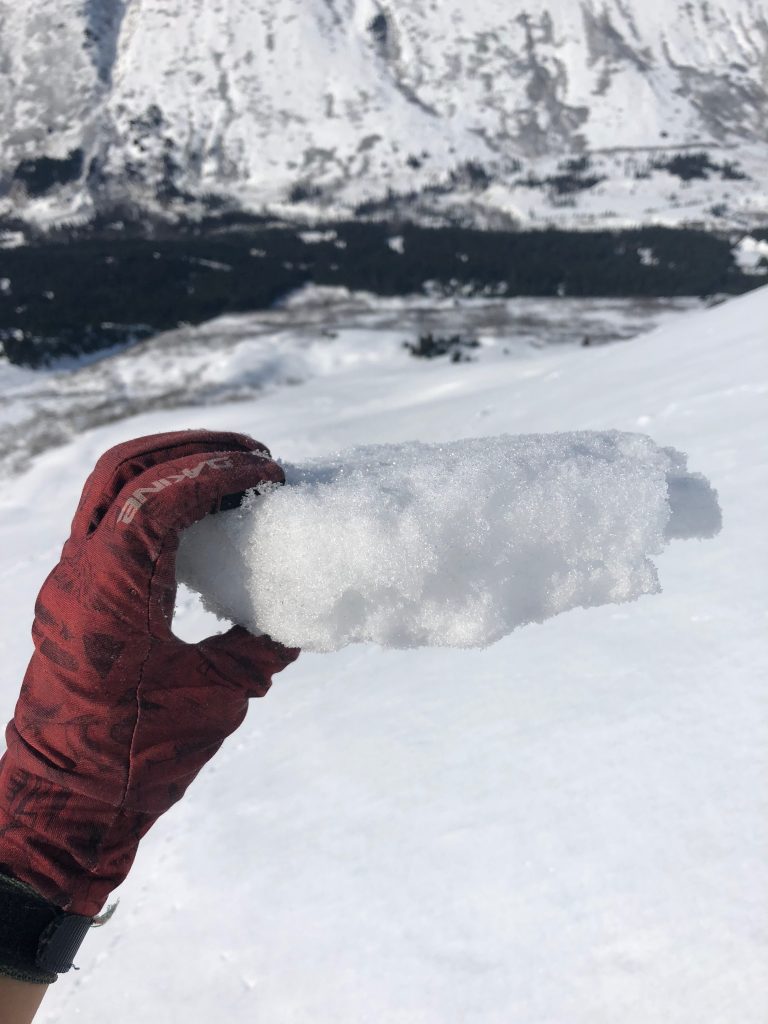 These are great days to be exploring. Thanks to Troy Tempel for the photo below from the far side of the Seattle Ridge drainage on Saturday. This is looking East back at Seattle Ridge proper and Zero, -1 and -2 bowls from the Western side of Seattle Creek. Note the large cornices in the distance along Seattle Ridge. 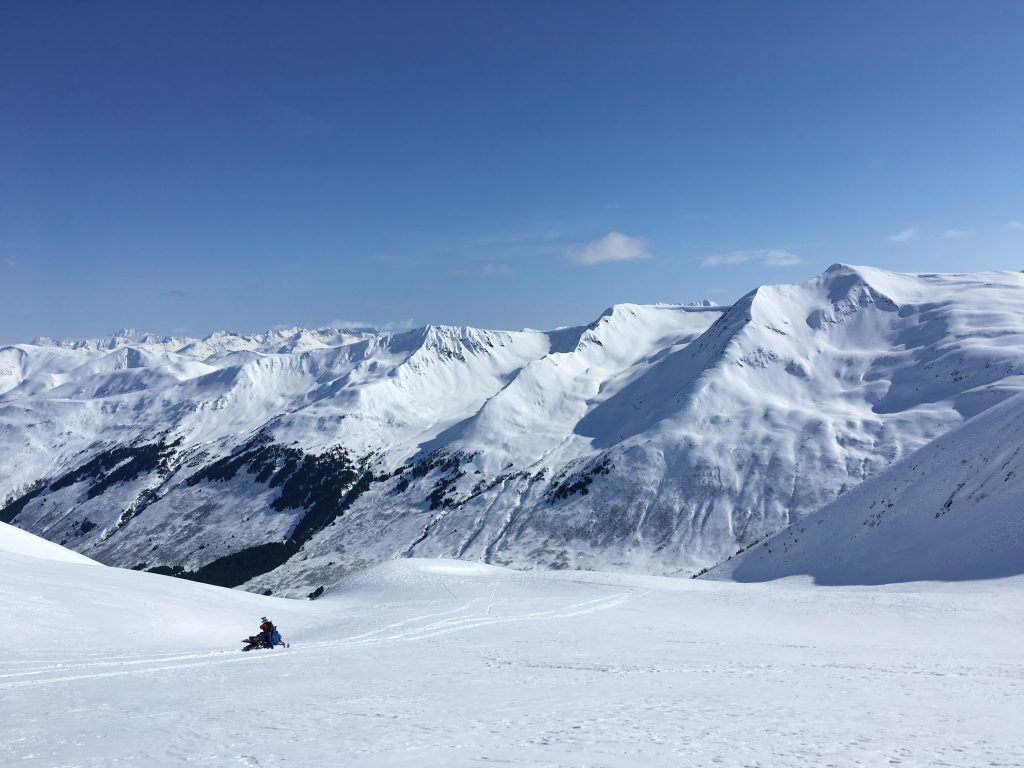 Sunny skies with thin high clouds were over the region yesterday. Ridgetop winds were light from the West (5-10mph) on the higher peaks. Temperatures were near 35F at 1,000′ and 25F along ridgelines. Temperatures have dropped to the teens in valley bottoms overnight but have remained warmer (mid 20’sF) at the upper elevations due to a warmer air mass that moved in.  Note the  increase overnight from teens to 21F at 4,200′at the Penguin weather station.

Today, sunny skies and warmer temperatures are on tap. Ridgetop winds look to increase to the 10-20mph range and shift more Northerly during the day. Temperatures should warm to the mid 30’sF in valley bottoms and remain in the mid 20’sF along ridgelines. Colder air looks to stream back in from the North this evening at the higher elevations, dropping temperatures back to the teens.

For tomorrow and Tuesday, mostly sunny skies, cool temperatures and windy off-shore conditions are expected. A chance for clouds and snow flurries may occur mid to late week as models show a low pressure developing in the Bering. Stay tuned.