The avalanche danger continues to be  MODERATE  above 1500′ in the periphery of the forecast zone, such as Girdwood Valley and South of Turnagain Pass. Triggering a hard slab avalanche 2-4 feet thick remains a possibility and may be triggered remotely. A generally  LOW  danger exists in the core zone of Turnagain Pass where triggering this type of avalanche is trending toward unlikely.  Pay attention to afternoon warming and give cornices a wide berth.

Similar avalanche concerns exist in the  Summit Lake area  and other zones on the Kenai.

As the days go by with little in the way of weather to contribute to avalanche danger, the chances for triggering an avalanche are decreasing. It has been over two weeks since the last snowfall, a week since the last human triggered avalanche and the snowpack is adjusting to the weak layers that sit in the middle and base of the snowpack. Terrain in the core Turnagain Pass zone is trending towards a LOW danger, meaning triggering a slab avalanche is unlikely – but not out of the question. Areas on the periphery, such as Girdwood Valley and the South end of the Pass towards Johnson and Lynx, we are more concerned with as they have a thinner snowpack and poorer structure.

Yesterday a large collapse was triggered under Goat Mountain in the Girdwood Valley (see Heather’s video below). This is a sign the snowpack can still produce a dangerous slab avalanche. The slabs in questions are hard slabs 2-4′ thick. The weak layers in question were formed in January and are various layers of facets and buried surface hoar. Though these layers are becoming harder and harder to trigger, there is still a chance someone could hit the wrong spot. This is a low probability, high consequence situation and makes travel in avalanche terrain tricky. No obvious signs of instability may be present before a slope releases and it may be the 10th skier or snowmachiner onto a slope that finds the trigger point. These trigger points are often in thinner areas of the snowpack near rocks or in scoured areas along ridges.

Sunshine:
If the sun shines in full force today be aware of warming later in the day on Southerly slopes. Especially steep southerly slopes with rocks that will help heat up the snow around them, aiding in possible wet avalanche activity. As we gear up for a weekend of sunny skies, keep the afternoon warming on your radar!

Poor snowpack structure and poor pit results found in the Girdwood Valley yesterday. This video was taken in Gulch Creek under Goat Mountain near 3,000′.

A loot at Turnagain Pass from the top of the uptrack on Tuesday. It has been over two weeks since snowfall and surfaces are hard and crusty from either the sun, wind or both. 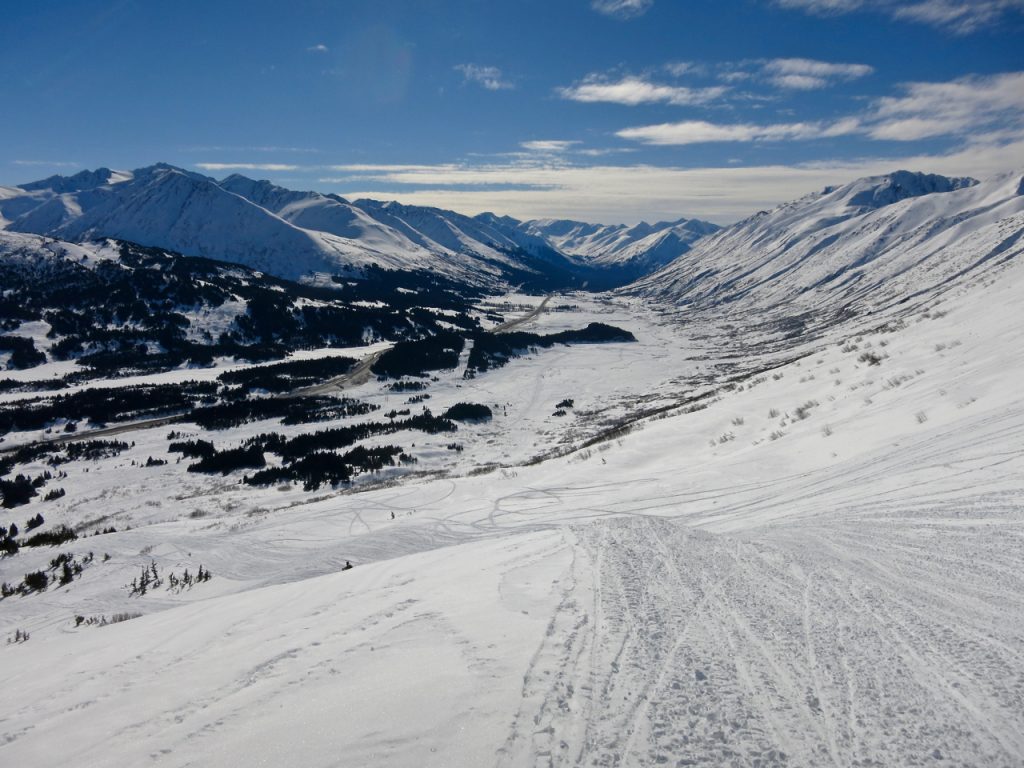 Cornices are large in many places. As we head into warmer, sunnier weather remember this can help de-stabilize them. As always, give cornices plenty of space and limit exposure underneath them.

Partly cloudy skies were over the region yesterday. A few snow flurries were seen in the morning but no snow accumulated at Turnagain Pass. A few inches were found in the upper Girdwood Valley. Ridgetop winds have been light from the North and West during the past 24 hours (5-10mph). Temperatures were in the teens yesterday along ridgetops and in the mid 30’sF in valley bottoms. Overnight, valley bottom temperatures have cooled slightly to 25-30F.

Today, Friday, partly cloudy skies this morning should give way to mostly sunny skies this afternoon as high pressure has built in over our area. Ridgetop winds look to remain light from the North in the 5-10mph range. Temperatures are expected to stay in the teens along ridgetops and warm to the mid 30’sF again at 1,000′.

For the weekend, we can expect high pressure to remain, which will bring mostly sunny skies and Northerly winds. Cool temperatures look to stay in place for Saturday, but warmer a air mass may push in Sunday or Monday. This could bring more spring-like conditions.