The avalanche danger is  MODERATE  above 1000′ where triggering a large, destructive slab avalanche 2-4+ feet thick is possible on all aspects and may be remotely triggered. Likely trigger spots will be thinner areas of the snowpack near rocks or scoured areas near ridgelines. Watch for wind slabs and avoid cornices. Pay attention to afternoon warming. Evaluate snow and terrain carefully.

Below 1000′ avalanche danger is LOW where a stout surface crust has formed.

Check out the most recent  Summit snowpack and avalanche summary  if you are headed South of Turnagain Pass.

Heighten avalanche danger exists region-wide including parts of the Kenai Peninsula, Western Chugach Mountains and the Talkeetna Mountains. Both natural and human triggered avalanches have been observed in these areas this week. Check out Hatcher Pass Saturday forecast HERE and recent observations in Chugach State Park HERE.  Know before you go!

The avalanche danger is best described as SCARY MODERATE because our current hard-pack snow conditions look and feel deceivingly stable. Triggering a dangerous slab 2-4+ feet deep may be stubborn or could catch you by surprise in an unusual spot. Yesterday a skier remotely triggered a large avalanche while descending a low angle slope on Raggedtop Mountain in Girdwood Valley on a Southeast aspect. This avalanche released on a steep rocky terrain feature 200 yards away from an adjacent slope. No obvious clues were present until the slope released. This is the scary part about our current snowpack.  It may be the 10th skier or snowmachiner onto a slope that finds a thin part of the snowpack (a trigger point) or it could be triggered remotely from an adjacent slope or below.

All aspects are suspect due to widespread and well preserved facets under a connected slab 2-4+ feet thick. These facets may be sitting on a slick melt/freeze crust or mixed with buried surface hoar from January. Strong Northwest winds that ended Thursday have caused unusual loading patterns opposite our usual Easterly storm track direction. This means the typical windward slopes with thinner weaker snow may be more loaded than usual and ‘trigger spots’ may be lurking just below the surface in unexpected places. Observers over the last few weeks have found poor structure along scoured ridges and under sastrugi we all assume is bomber and safe. Knowing where in the terrain a large and destructive avalanche could be triggered is a difficult question without x-ray vision. Evaluate terrain for consequences and don’t assume the ‘typical safe zones’ are truly safe. The bigger and steeper the terrain the more potential for a very large and destructive avalanche.

**Over the last few days only very steep South and Southeast slopes have been softening in the sun. Gentler slope angles have remained dry on these aspects. Surface warming may not be present until committed to steeper features. Don’t underestimate the power of the sun. Subtle warming may make it easier to trigger a slab later in the afternoon.

Skier triggered slab on SE aspect of Raggedtop at ~3000′ at 3pm yesterday from 200 yards away on low angle terrain. This photo was taken later in the evening. The skiers route can be seen along the lookers left ridge.

This avalanche occurred on a thinner rocky area on a steep terrain feature. Don’t forget larger more connected slopes have the potential for an even larger avalanche. 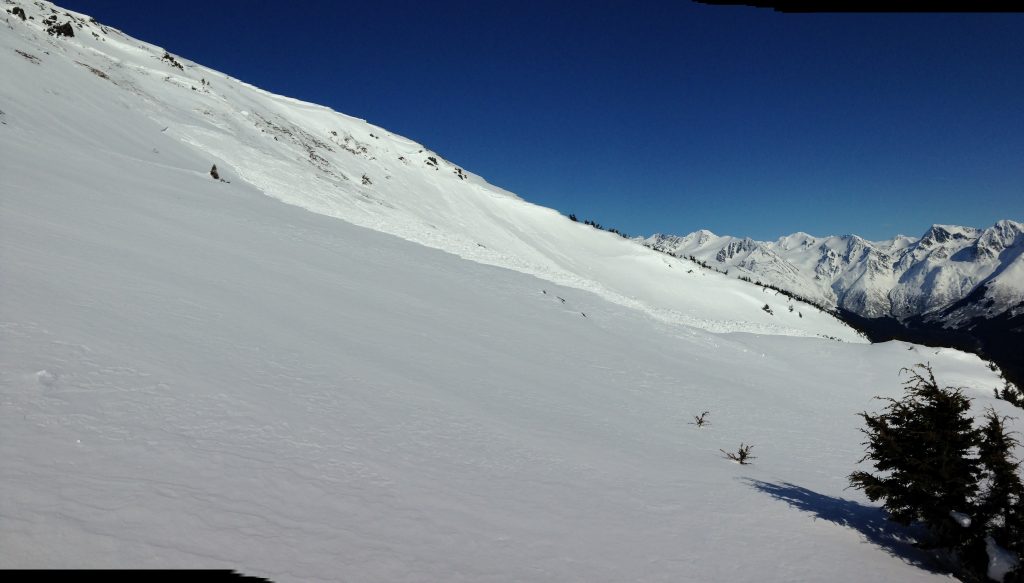 Loose facets sitting on a hard melt/freeze crust found under 5 feet of hard snow in Lynx Creek on Tuesday. This structure has been found across our forecast zone. 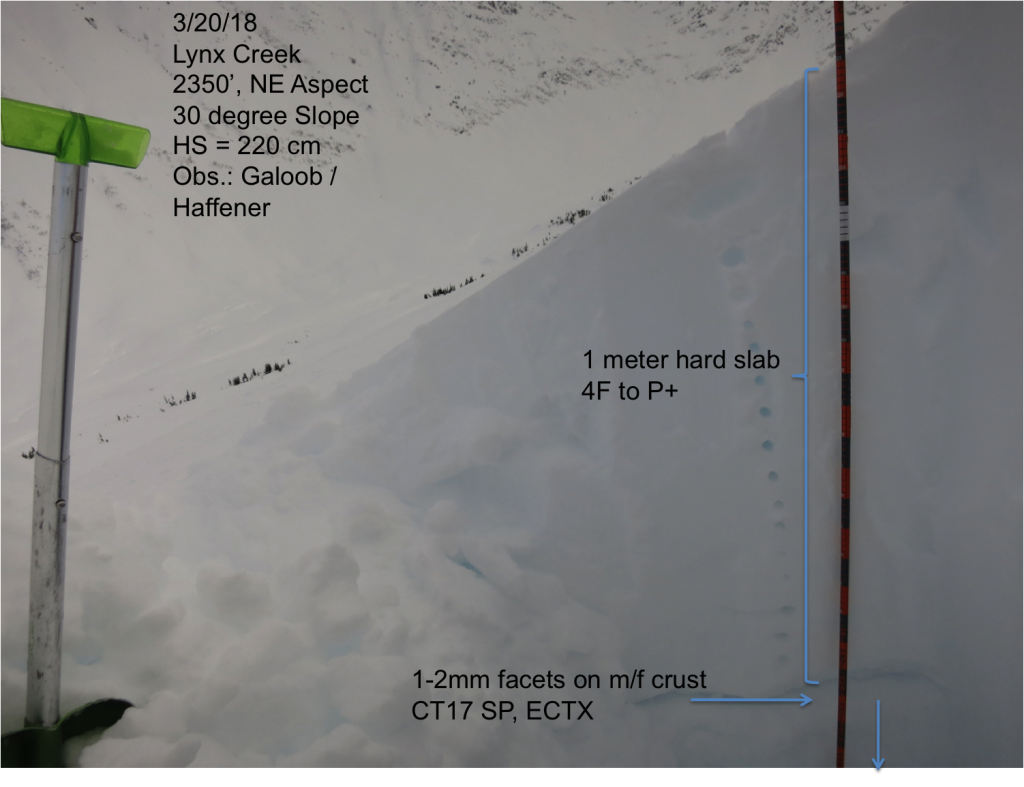 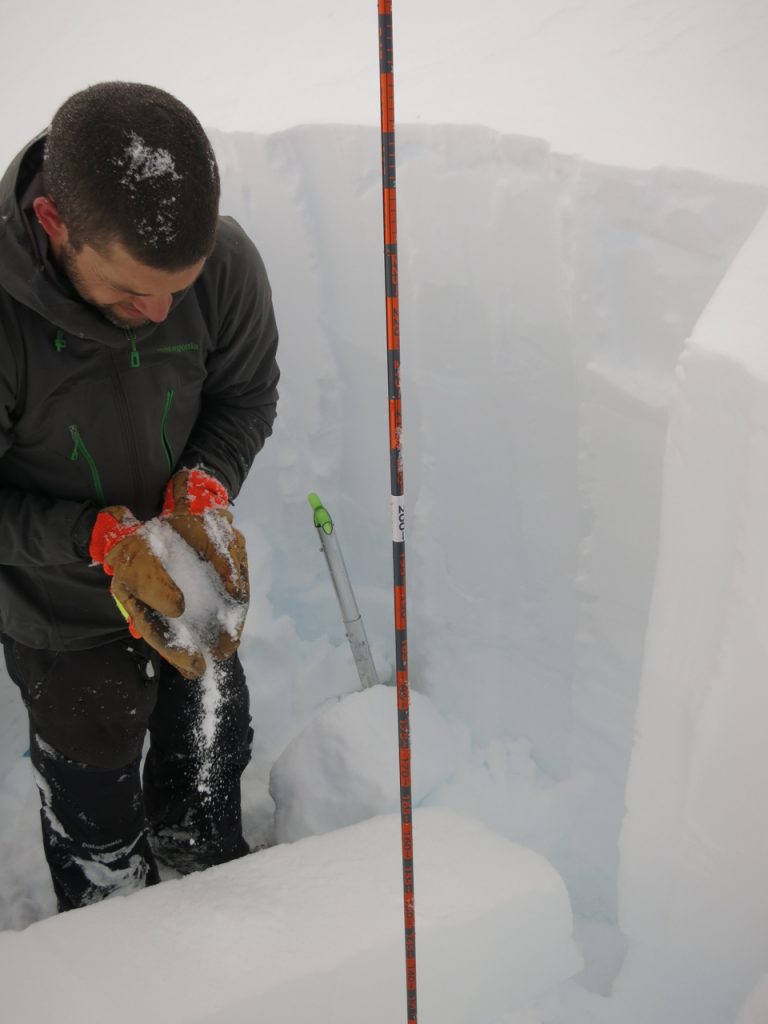 Wind Slabs: Old wind slabs may be lurking on a variety of aspects due to unusual loading patterns this week. Smooth supportable surfaces where the snow is hollow sounding are suspect, especially if the slope is unsupported. Triggering an old wind slab is becoming less likely, but warming from the sun can make triggering easier in the afternoon. It will be impossible to tell the different between a small isolated wind slab versus the deeper more dangerous avalanche problem described above.

Cornices: Cornices are large and looming and the sun and above freezing temperatures can make them more unstable. Give cornices lots of space and limit exposure underneath them.

Northwest winds can funnel through Turnagain Pass from the Southwest and load Northern as on Magnum North facing terrain. These slopes are often thin and scoured. 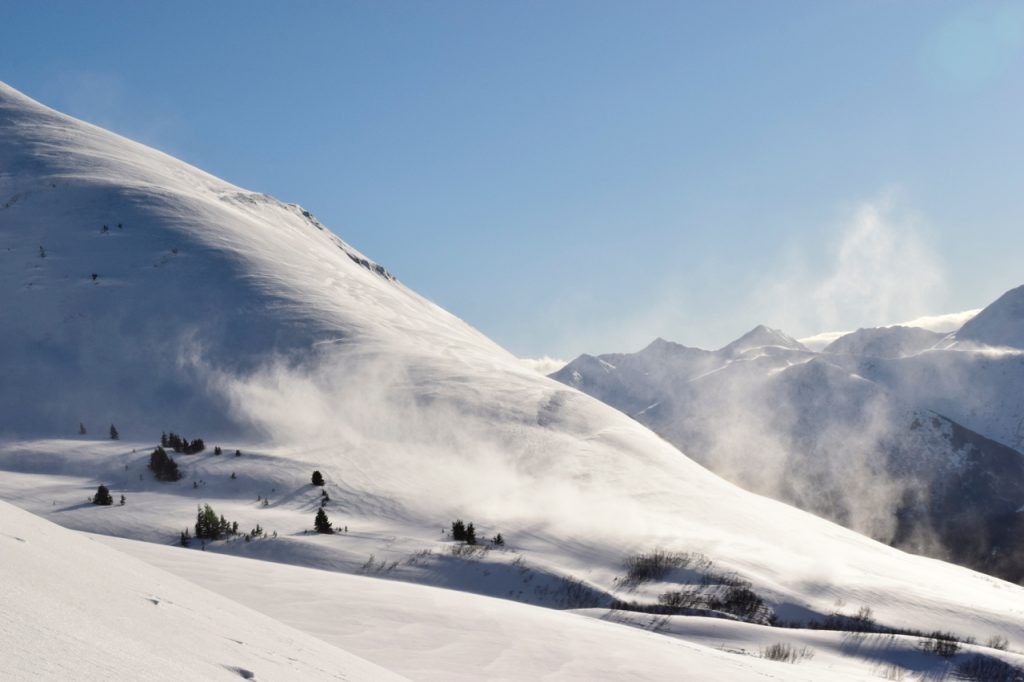 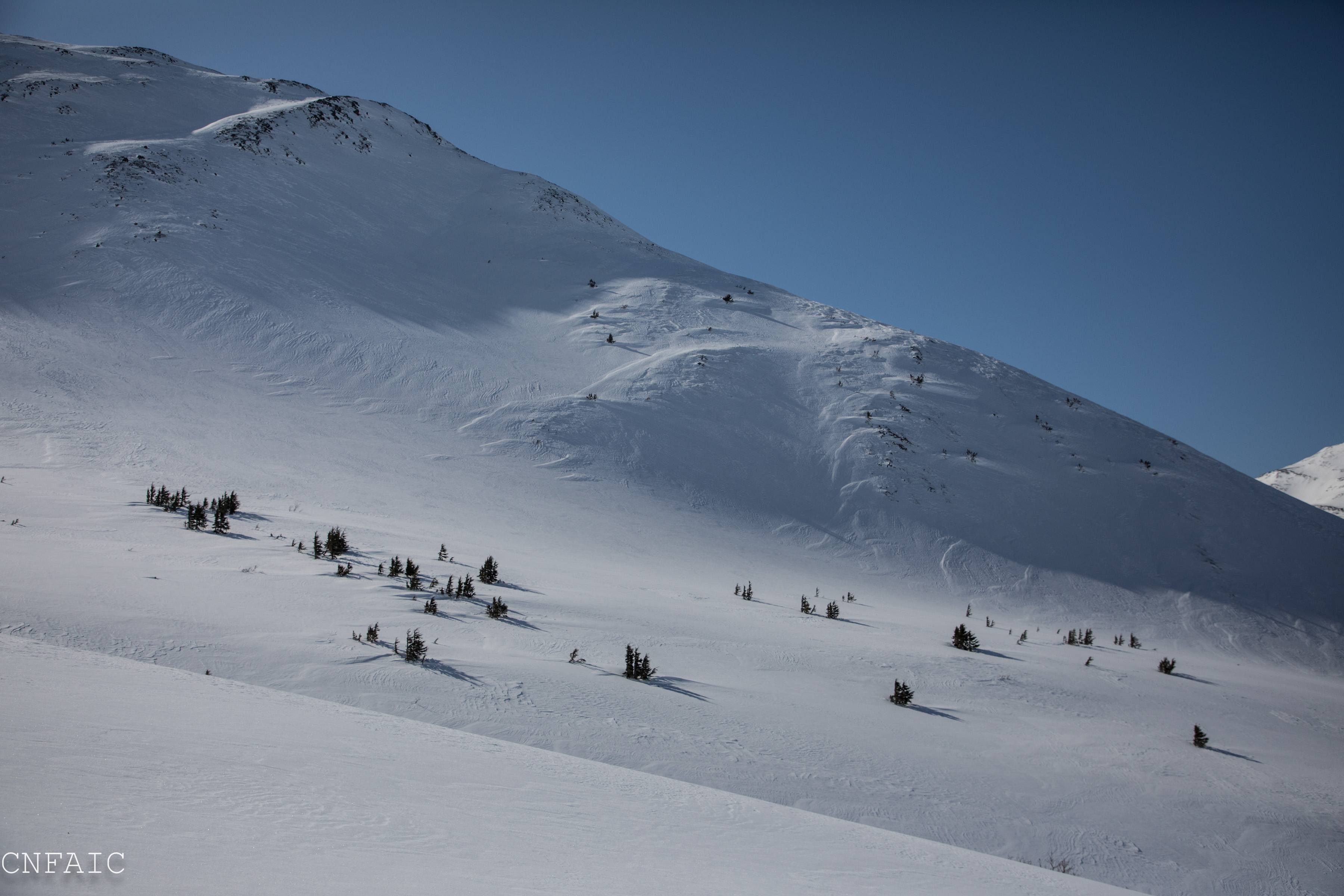 Yesterday skis were clear and winds were light and variable. Daytime high temperatures near sea level reached the low 40F’s and overnight dipped into the teens F.   Ridgetop temperatures reached the mid 30F’s and cooled to teens (F) overnight.   No precipitation was recorded.

Today expect similar either with clear and sunny skies. Winds will be light and variable. Daytime temperatures may reach the mid 30F’s in the upper elevations and low 40F’s at sea level. Overnight temperatures will drop back into the teens F at all elevations.

Tomorrow skies are expected to become overcast as low-pressure moves into our region. Scattered snow showers are possible Sunday night and Monday, and a few inches of new snow is forecasted. Temperatures are expected to stay cool enough to keep this precip as snow. Ridgetop winds will build tomorrow to Moderate (15-30mph) from the East through Monday.