The overall avalanche danger is  MODERATE  at all elevations due to a handful of avalanche concerns and springtime condtions. Triggering a large and dangerous deep slab avalanche (3-6′ deep) on slopes over 35 degrees remains possible, but will be hard to trigger. More potential for this problem exists on Northerly aspects above 1500′ that haven’t avalanched already. Warm spring like temperatures will also increase the potential for wet snow avalanches in the afternoon and evening. These could be wet slabs or wet loose avalanches on Southerly aspects, or on all aspects below 1,500′. Identify glide cracks and cornices and give these unpredictable features lots of space as daily warming will be making these features more unstable.

***The danger could  rise to CONSIDERABLE, especially  in shallow snowpack zones where wet snow avalanches may occur naturally.

Hiking in Portage Valley and on summer trails around the Advisory area (including the Turnagain Arm Trail a.k.a the bike path).   Extra caution is advised during the afternoon and evening hours for trails that cross under avalanche paths. Avalanches are still possible at the higher elevations that could send debris over snow-free hiking trails.

There are several weak layers within our snowpack, including a layer of buried surface hoar anywhere from 2-6′ below the surface. This buried surface hoar layer was the culprit weak layer in many human triggered deep slab avalanches over last weekend in Seattle Creek. Shaded aspects (NE – NW – W) in the mid and upper elevations that haven’t avalanched already are the most suspect places for triggering a deep slab avalanche. There is also some potential on steeper solar aspects later in the day as sun heats up the slab and breaks down the surface crust. (More on this in Secondary Concern.)

This problem is one of low probability but high consequence as these are large and potentially unsurvivable slides. As the snowpack continues to adjust, triggering will become more stubborn and less likely with time, but the hazard remains. Keep these point in mind:

If wishing not to roll the dice on this deep slab possibility, one can always stick to slopes under 35 degrees or go to places that have already avalanched.

A snowmachine triggered deep slab that occured on Juniors in Seattle Creek on Saturday. More details about the incident can be found HERE and snowpack details HERE. 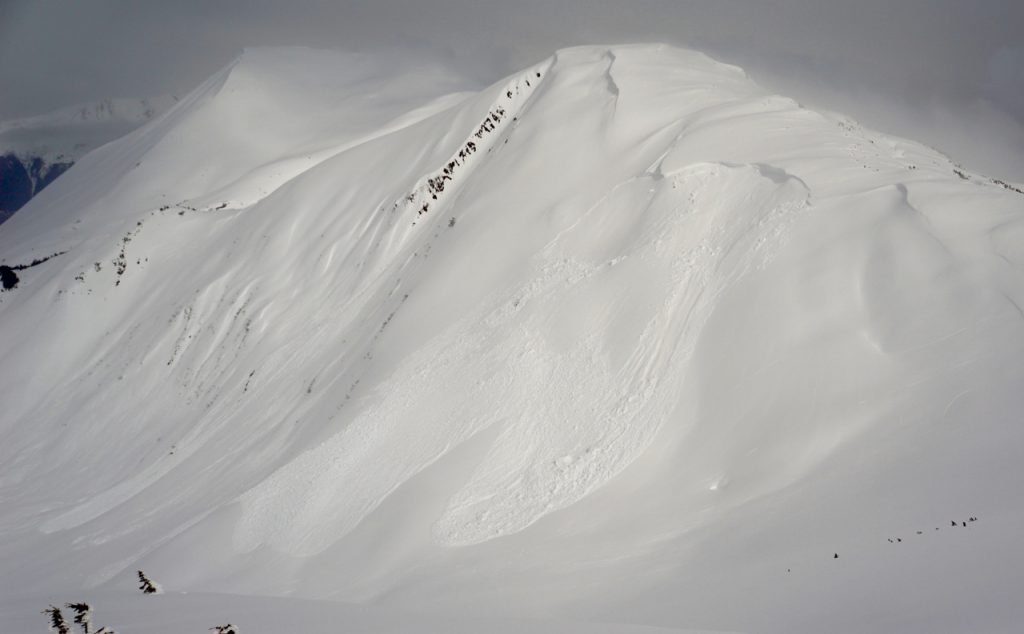 A recent slab avalanche on a Northeast aspect of the Headwall in Seattle Creek. The trigger is unknown, but apears to be pretty fresh. 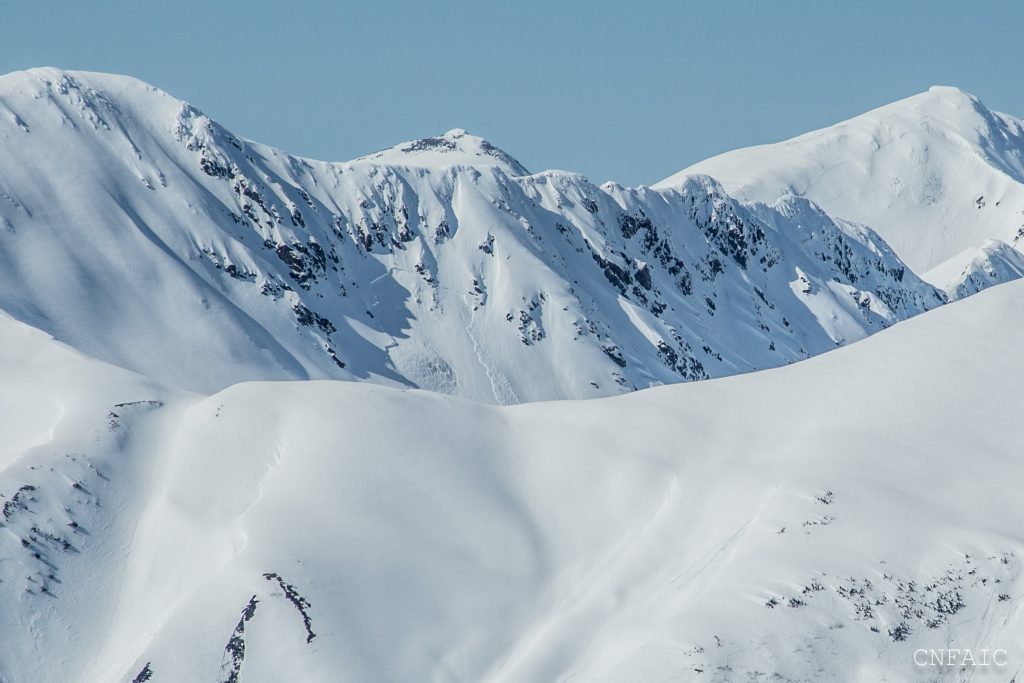 Springtime melt-freeze cycle (Southerly aspects): We are moving into what we call a melt-freeze cycle. Low avalanche danger in the morning, Moderate to Considerable danger in the afternoon. When the snowpack is frozen in the morning from nighttime cooling, it’s stable. During the course of the day the pack warms and becomes unsupportable, this is when the avalanche danger rises. Temperatures today could reach the 50’sF in the parking lots and near 40F at ridgetops. This is when Southerly aspects and the lower elevation snowpack will become wet and unsupportable to snowmachines, skis or boots. When the pack gets this loose and punchy it’s time to head to a different aspect as slopes steep enough to slide will be suspect for wet snow avalanches. Human triggered wet loose slides and wet slabs are a possibility later in the day and are nothing to mess with. Keep a close eye on Southerly slopes, especially near rocks and thinner snow zones, and avoid being in the runtout of these areas.

Wet loose avalanches that occured two nights ago on a South aspect of Penguin ridge.This is a good example of a slope with lots of rocks and thin snow coverage that can heat up and loose strength easily with such warm day time tempertures. 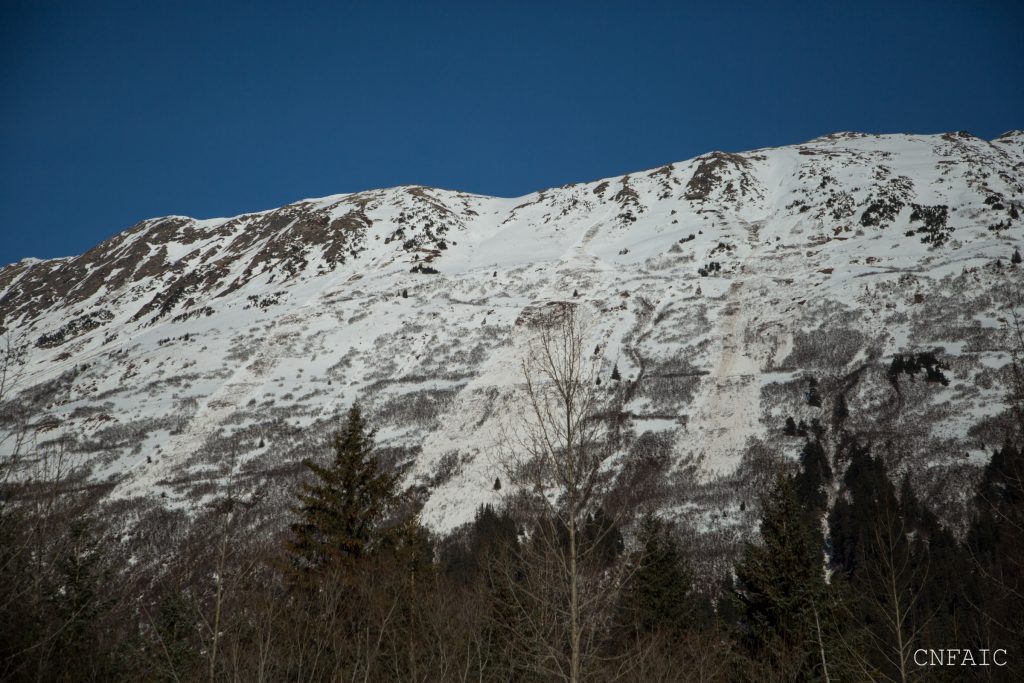 Glide Avalanches: Yesterday a glide avalanche occurred on the South face of Eddies just before 8pm and was captured on the DOT web cam. There are a handful of glide cracks in specific places like the South face of Eddies, Lynx Creek and even near the up-track along Seattle Ridge. Warm temperatures and prolonged solar energy, expect more of these cracks to release without warming in the next few day. Identify existing cracks and avoid travel in their runout zone.

CORNICES: Daytime warming and solar heating will be adding stress to Cornices as well. Avoid travel on or underneath these backcountry bombs and remember that they often break further back on a ridge than expected. Triggering a cornice has the potential to initiate a large avalanche on the slope below.

This glide release occured yesterday evening on a South aspect of Eddies just before 8pm. Captured on DOT web cam. 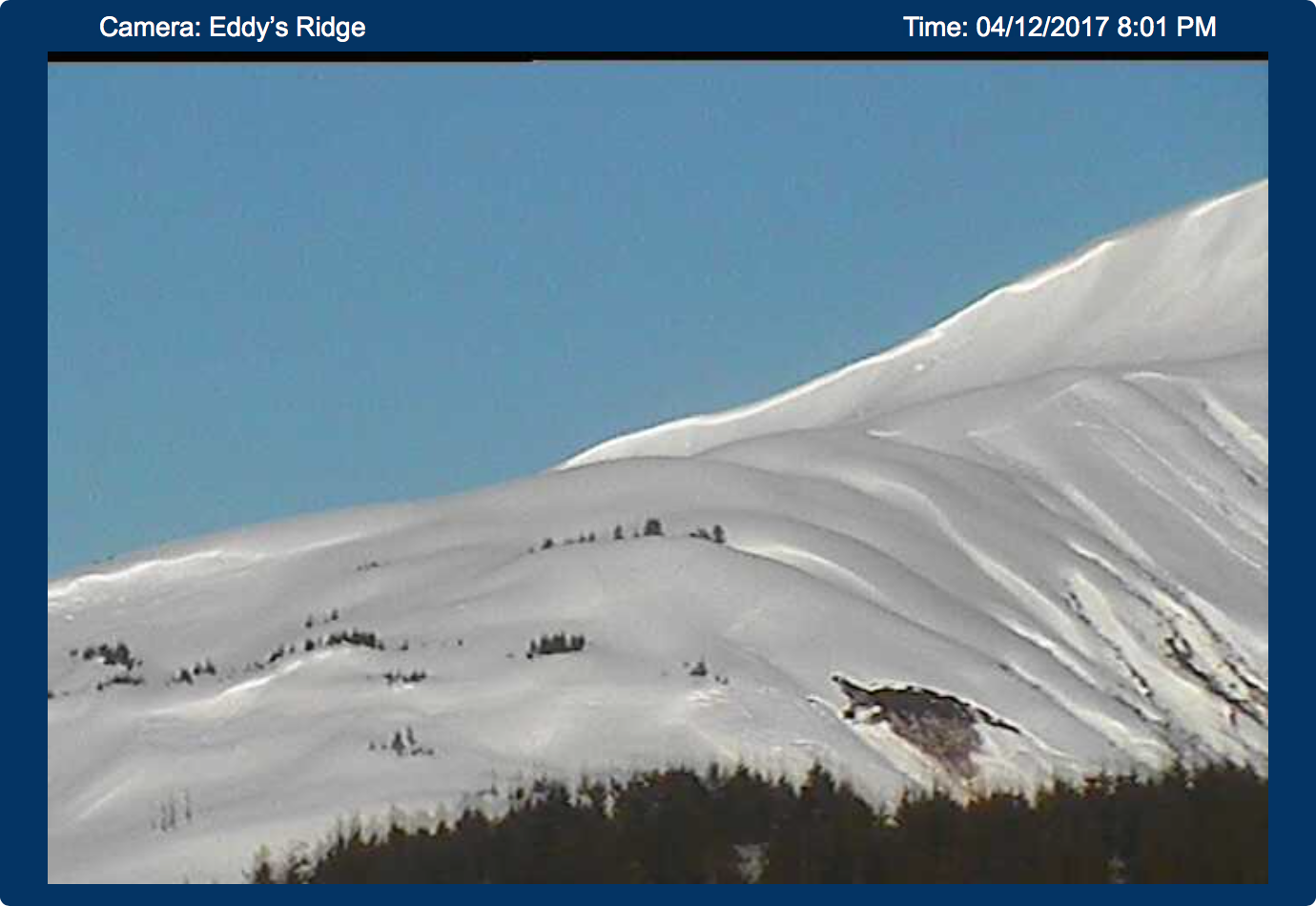 Yesterday skies were clear and sunny. Temperatures in valley bottom climbed into the low 50F’s and ridge tops reached nearly 40F. Winds were calm becoming light 5-10mph from the West in the evening. Overnight clear skies remained and temperatures dipped down into the low 30F’s.

Expect similar weather today. Day time temps could reach the mid 50F’s this afternoon in the lower elevations and mid 40F’s in the upper. Temperatures overnight are expected to reach the low 30F’s.   Ridge top winds from the N should range from 5-15mph. No precip is in the forecast.

Clear skies and warm temperatures are expected through Saturday morning. There remains much uncertainty through the weekend, but there is talk of cloud cover and a possibility of snow/rain showers.

*Some temperature data is missing, making this average not as accurate.