Left sled lot @ ~11:30, normal uptrack, Drove to Minus 1/Warm-up bowl, noticed a medium sized avalanche on the SW facing slope that was not there the previous afternoon (possible trigger, cornice collapse causing entire ridgeline to fail due to intense solar radiation, ~500’width ~1000’length 1-3’crown, steep angle). Also observed the extent of the natural storm shed cycle that was obscured by clouds the day before. Very impressive, nearly every aspect and elevation had slid naturally during the last storm on the bulletproof layer created during our month long hiatus from the white stuff. The group then decided to go down and check out Main Bowl. There we observed another medium sized avalanche on a NW. facing slope, lookers right of Widow Maker that had not been witnessed the day prior (unknown trigger, ~300’width ~200’length ~2-4’crown, relatively low angle). Because of the heavy traffic in Main Bowl we moved on to Juniors where the slide occurred.

While doubling up with my friend to do our first line on Juniors we noticed out of the corner of our eye a large crack appear ~1000' off to our left just as we gained the ridgeline. Knowing that the other four members of our group were sledding in that area we immediately turned to our right to gain a high, safe vantage point and get "eyes on". ~10-15 secs passed while the avalanche was out of view due to the terrain. By the time we got in position the avalanche was mostly over with a few of the sections slowly coming to a rest and the largest crown/cornice chunks (VW bus sized) settling into place. Luckily, to our relief, we could see that our friend and his sled were on the uphill edge of the debris pile and he appeared to be walking around and uninjured. We could also see that the other three group members were safely moving away from the toe of the avalanche debris to gain a higher vantage point. While trying to figure out a plan to get him and his sled out of their current predicament, one of our group members who saw the entire thing drove up to us and described what he saw saying basically "The rider was towards the middle of the slope when it fractured, the whole thing developed relatively slowly and he was able to continue uphill a little ways further until it turned into more of a treadmill where he wasn't moving forward but was able to stay on the surface of the broken pieces and eventually drive off the trailing edge of the avalanche." While this was going on the rider was able to get his sled pointed downhill and thankfully, ride safely down the edge of the debris to the bottom (getting to him would have been extremely difficult and dangerous due to the nearly impassible debris field and 10'+ hangfire). When we all regrouped and had a few "glad you're OK" high fives the rider described driving up the slope (there had been several tracks on it already), after another group member had gone up and safely descended, to scope out a potential jump spot when everything around him started to spider web. He said he made a split second decision to pin the throttle and eventually he began to see the bed surface appear. At that point most of the avalanche had passed by so he decided to bail from his sled unto the bed surface to avoid possibly getting injured trying to drive off the slab (sled somehow landed upright).

Trigger point appeared to be a buried rock outcropping near the middle of the slide path where the snow pack was thinner. Crown face was anywhere from a few inches on the edges to 10-15' at its thickest point on a convex, partially corniced roll over. ~300' wide, ~1,500-2000' length, hard slab, in my opinion easily deserves a D3 rating and could've warranted a D4 if the slope had been longer and/or steeper.

Completely blue bird, last significant snowfall was on 4-6-17, Winds were calm to a slight breeze Temp @ road level was close to 50ºF and hovering near freezing on Seattle Ridge with significant warming throughout the day 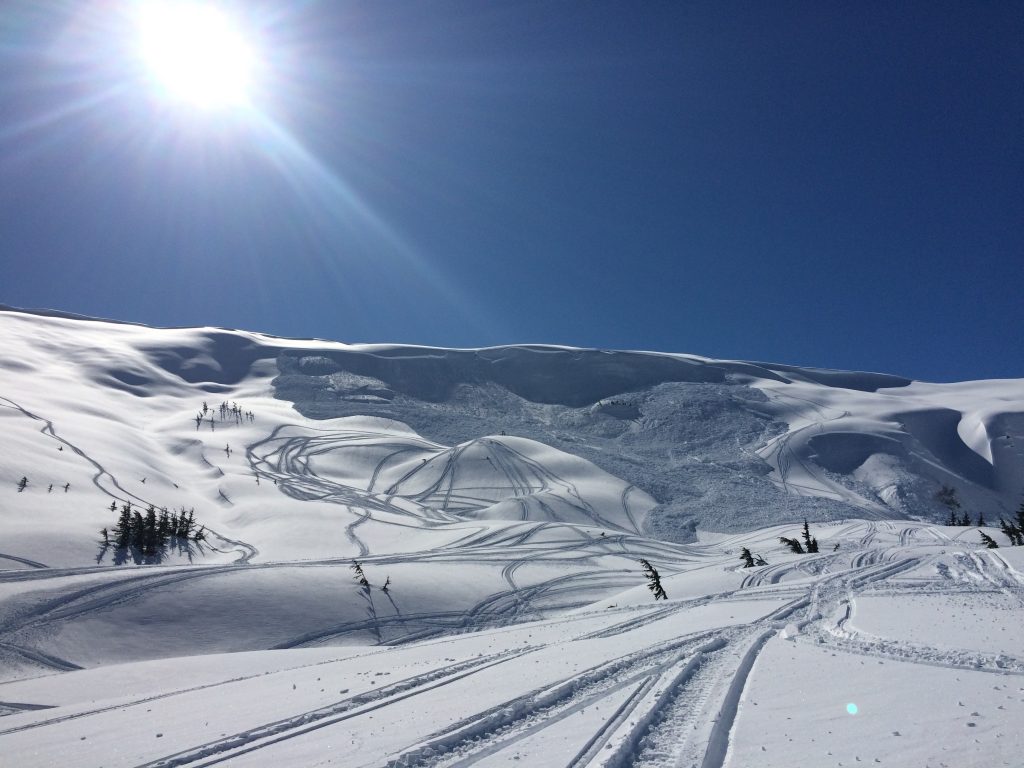 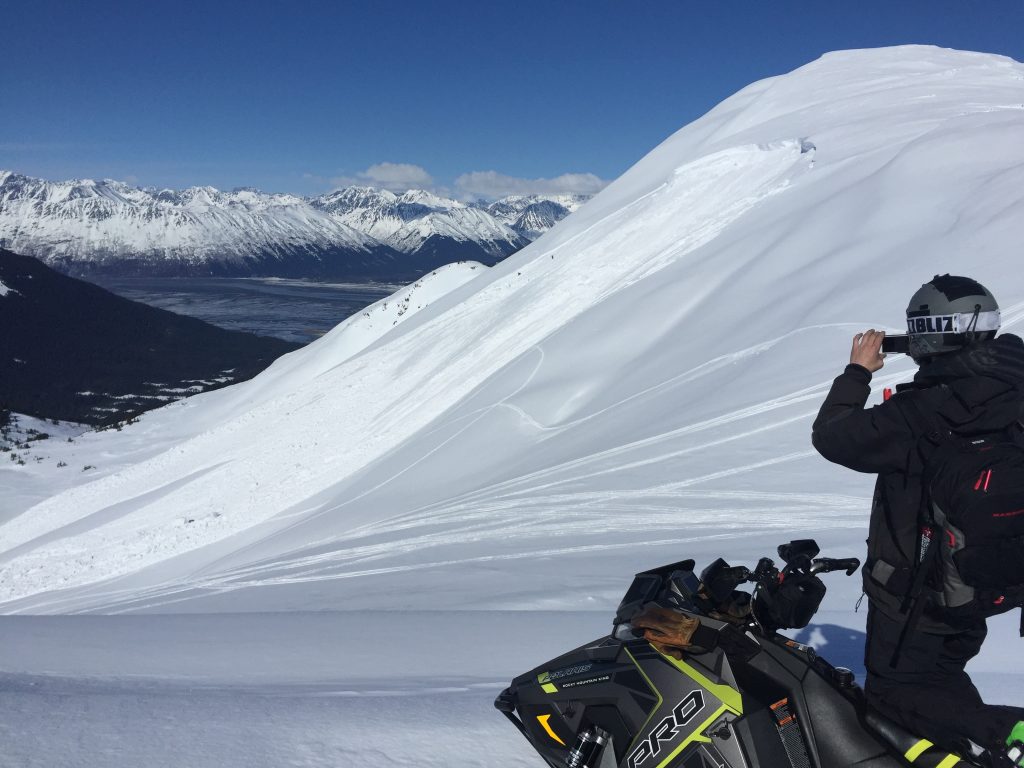 Photo of slide moments after it happened. Rider and sled at far side of path 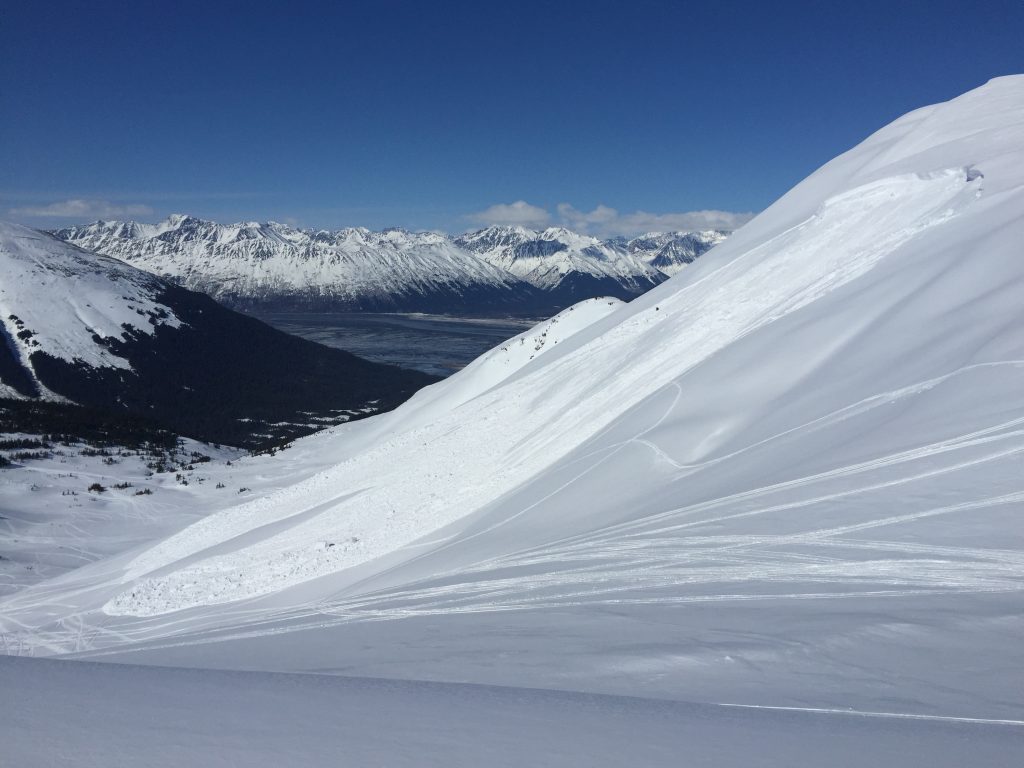 Another view of the slide 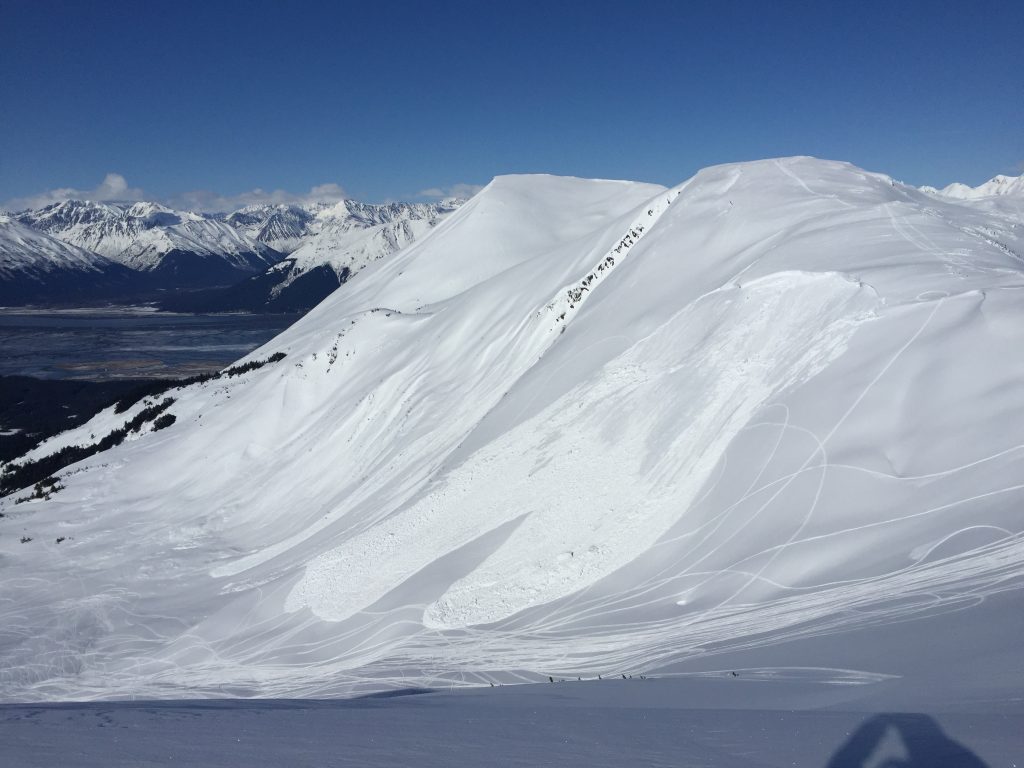 Another view of the slide from higher elevation 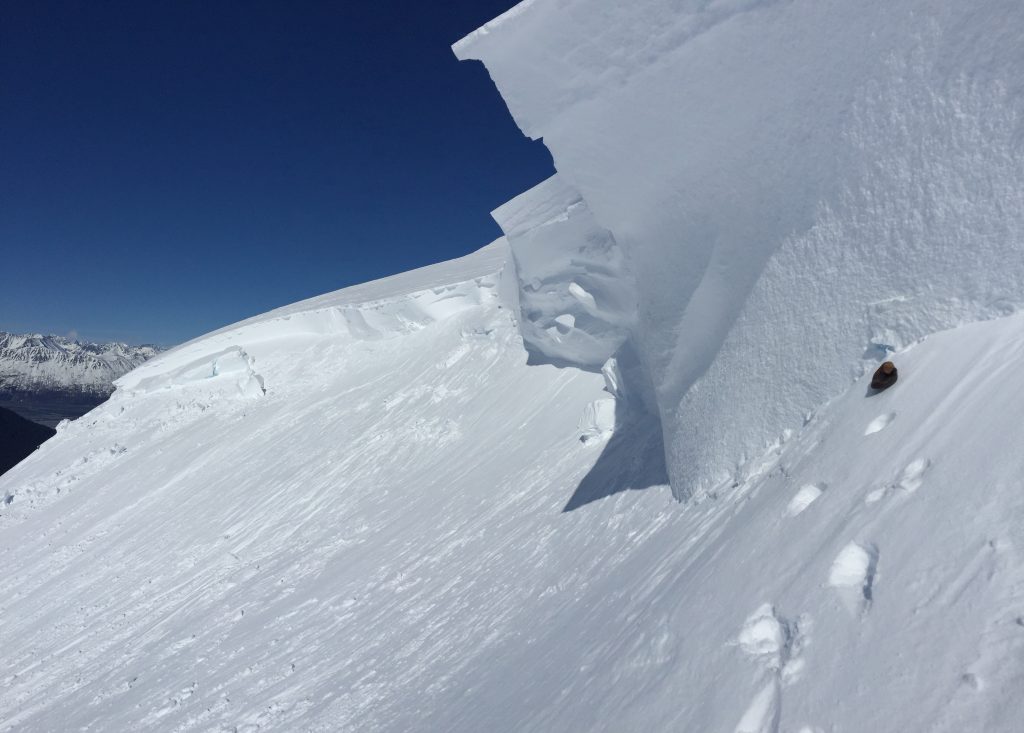 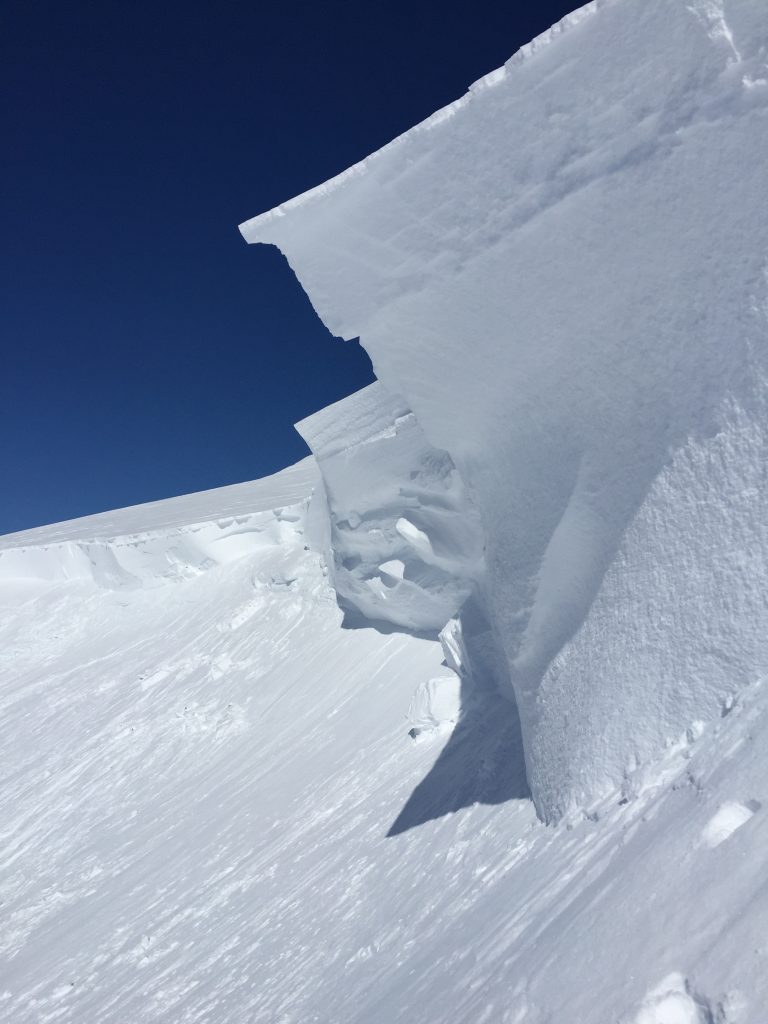 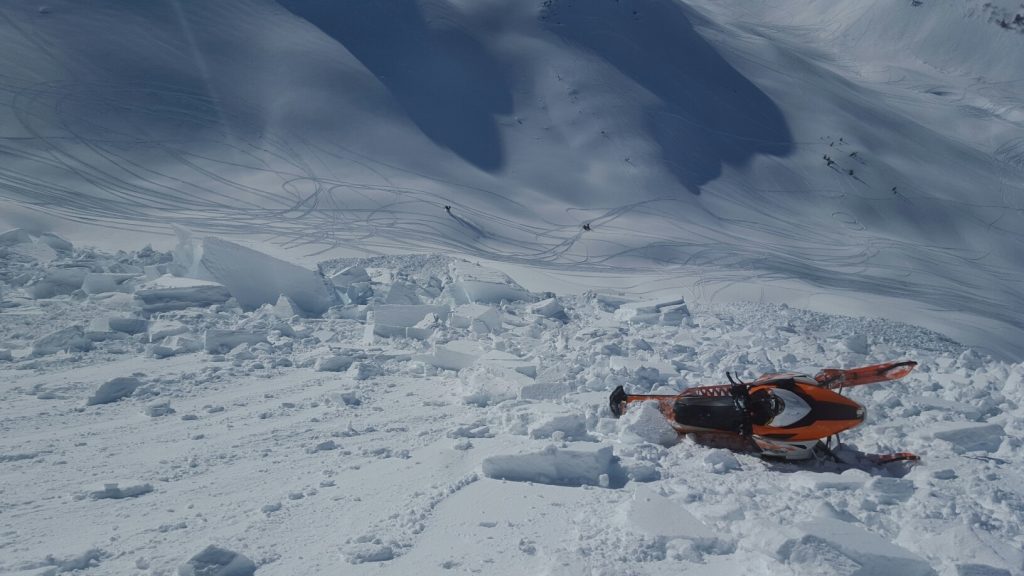 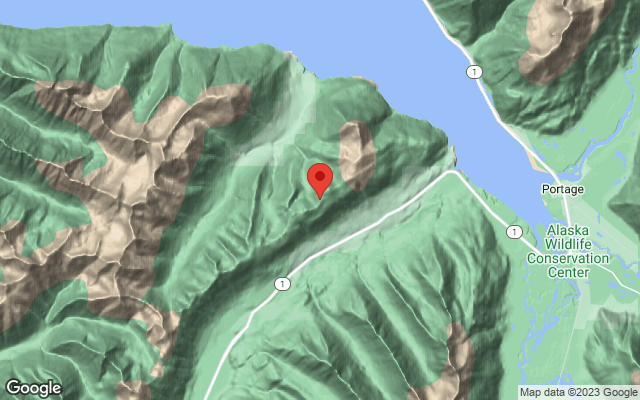