Strong winds expected in parts of the forecast zone will keep the avalanche danger at CONSIDERABLE  today at the higher elevations. Moderate winds impacting the middle elevations will keep the danger at MODERATE. Wind slab avalanches will be the primary concern and there is the possibility these could release naturally at the upper elevations where persistent wind loading has occurred. There is also the possibility that wind loaded slopes could reactivate buried weak layers in the snowpack, creating a larger slab 2-3+’ deep.  Cautious route-finding and conservative decision making will be essential.

Below 1,000′ the avalanche danger is  LOW  where triggering an avalanche will be unlikely.

In Summit Lake, Girdwood, and on the southern end of Turnagain near Johnson Pass a thin snowpack with a poor structure exists as weak snow sits near the ground; full depth avalanches are possible, yet will be hard to trigger.

During these cold and windy days, consider showing your support for public avalanche centers when applying for your PFD!!  Friends of the Chugach National Forest Avalanche Center is an  official  Pick. Click. Give. organization!

It was another sunny, cold and windy day yesterday. Plumes and flagging were evident along almost every ridge in the mountains at one point or another. The peak in winds occurred later in the day and this is expected to be the case again today as the Northwest winds are slated to bump back up to averages in the 20-30mph. Believe it or not, a few riders/skiers were able to find some soft snow in sheltered zones. However, much of the snow surface out there consists of wind hardened snow – sastrugi, wind slabs and wind crusts with scoured zones in between.

With winds such as these we can expect to see hard wind slabs forming on leeward slopes. Additionally, cross-loading lower on slopes should be expected. Although a portion of the snow is being blown into the atmosphere, and not landing back on the surface, there is enough snow that is. Keep in mind, slabs could break above you and even a small hard slab can knock a person off their feet or snowmachine. Situational awareness is your friend. What slopes are being loaded by winds? What direction are the plumes going? With the relentless loading for days now, natural wind slabs could occur at the higher elevations and wash debris through gullies to wind protected zones that could ‘feel’ safe from below. Look for hollow feeling snow (stiff snow over soft snow).

These unpredictable hazards can release naturally and break farther back onto a ridge than expected. They also have the potential to trigger an avalanche on the slope below. Cornices should be given extra space above and below them.

Plumes along Seattle Ridge seen from the motorized parking lot. 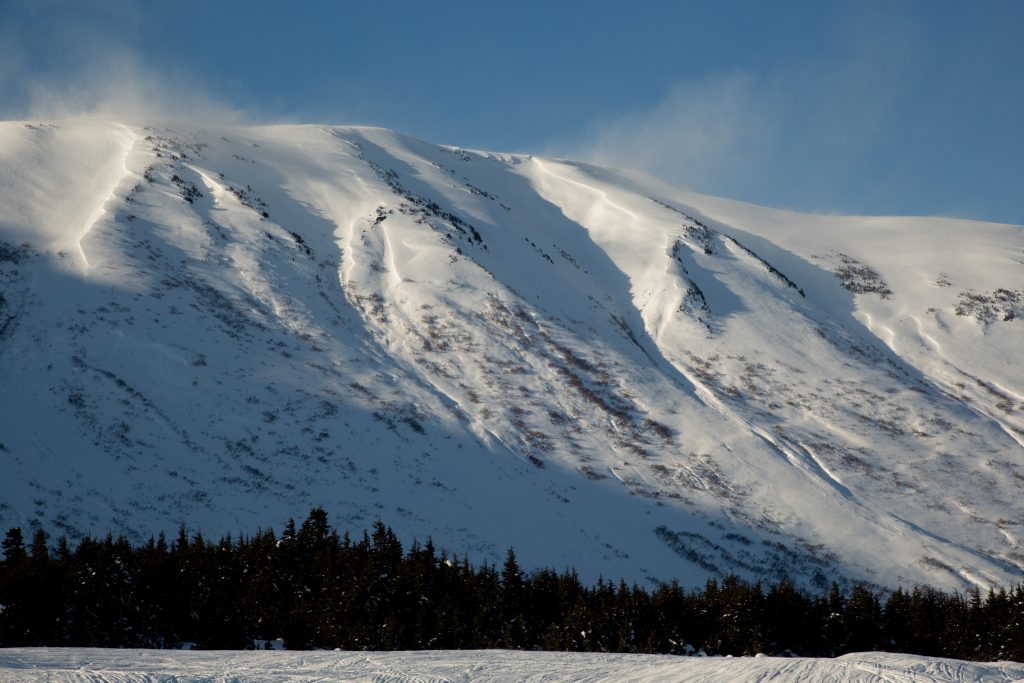 Plumes on ridgetops looking South across Turnagain Arm from the Tesoro station in Girdwood. 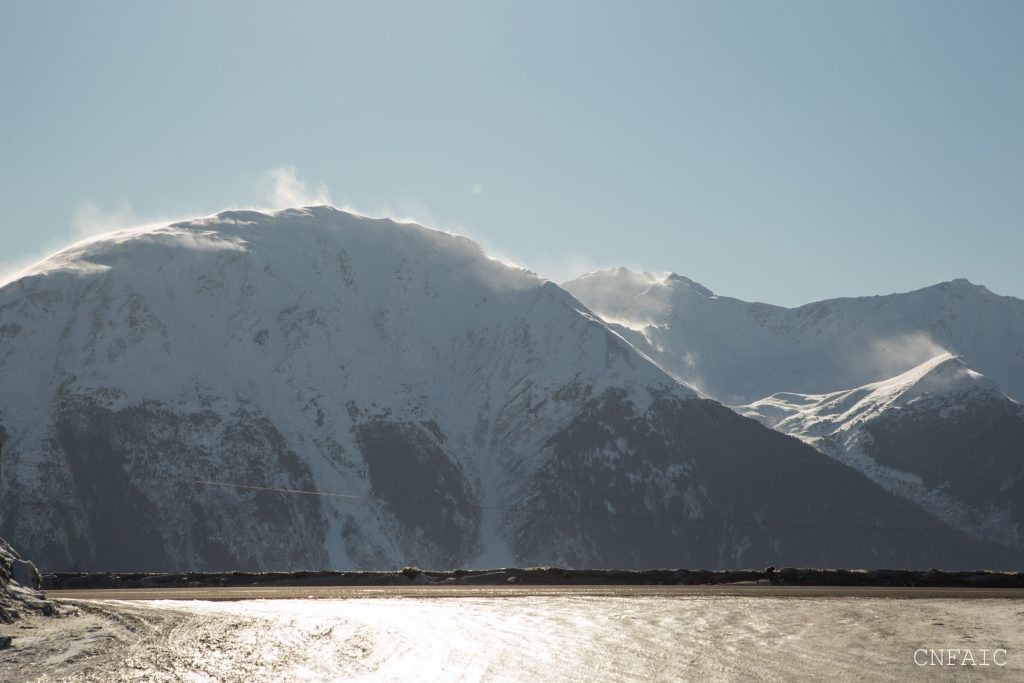 Magnum’s West face is still somewhat saved from the winds as of yesterday afternoon. The winds have yet to destroy parts of Turnagain Pass on the East side of the highway. 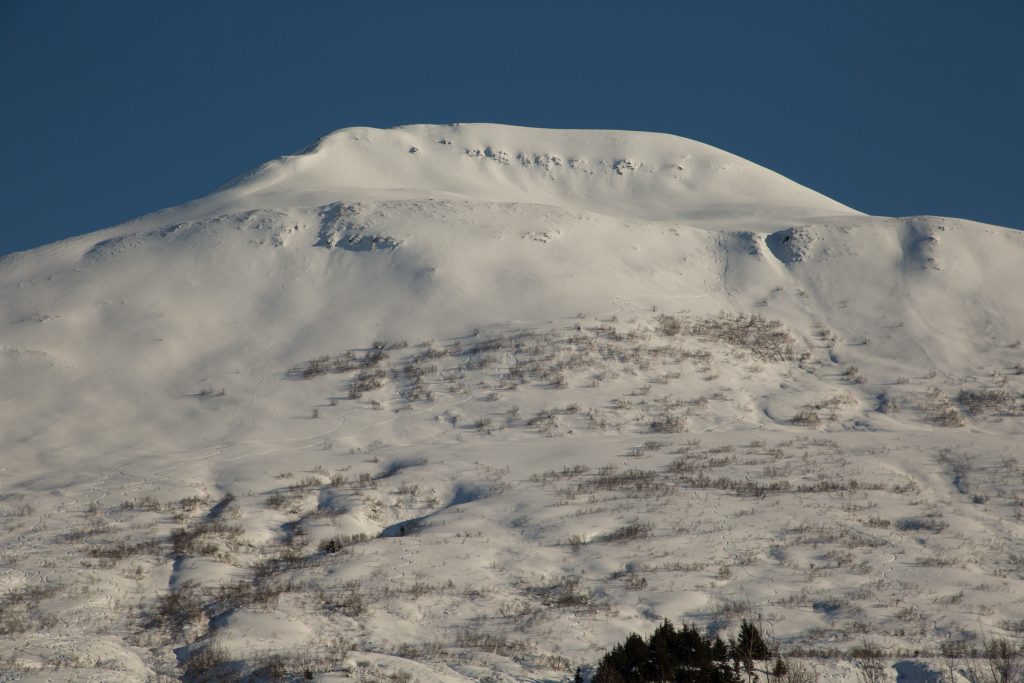 Earlier this week when the ‘wind event’ first began, slopes loaded by winds reactivated older buried weak layers. In particular the February 9th buried surface hoar on the southern end of the advisory area (i.e., Johnson Pass and Summit Lake). This layer has been found to be shallower (12 – 20” deep), making it easier to trigger. In areas with a deeper overall snowpack (Seattle ridge, Tin Can, Sunburst, Girdwood Valley) the Feb 9th buried surface hoar is 2’-3’ below the surface and has been very tough to trigger in stability tests, but does continue to show the potential to fail and propagate.

The other weak layers are facets near the ground and in the mid-pack in some locations. This is a Deep Persistent Slab issue.  Areas of concern include Summit Lake, Johnson Pass zone and some areas in Girdwood Valley. Continual winds with this event may be loading these old weak layers to the point of failure as well as be creating more trigger spots – thinner areas of the slab through scouring.

Photo below from the Summit Lake area. This avalanche likely occurred three days ago on Monday night or Tuesday morning. An example of a wind loaded slope that reactivated old weak layers near the ground. 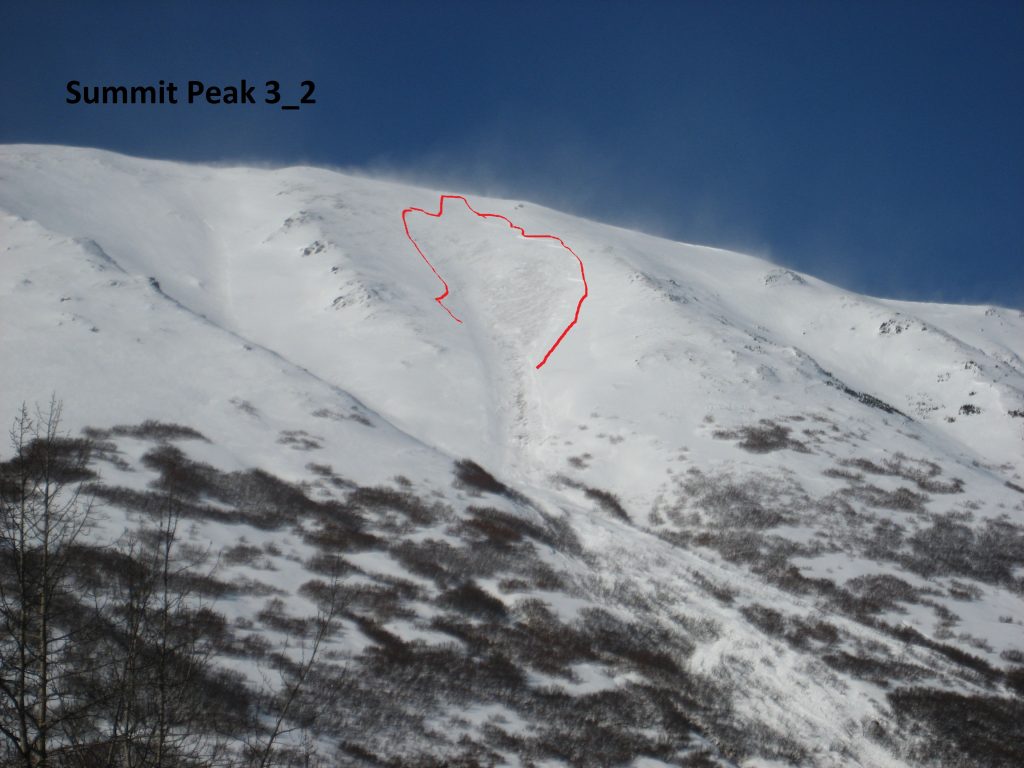 Yesterday was yet another cold and windy day. The skies were sunny, but only in very protected spots from the wind did it feel warmer. Temperatures were in the teens at sea level and cooled with elevation to the single digits along the ridgelines. Ridgetop winds were from the Northwest in the 10-30mph range with gusts to 50mph at the Seattle Ridge weather station.

Today will be much of the same: sunny, windy and cold. The strong Northwest winds slowed slightly last night, but are expected to pick back up today, averages of 20-30mph. Temperatures will again be in the single digits and minus single digits along the ridgelines while parking lots are a bit warmer, ~10F.

There is what is called an omega block over Alaska currently that is litteraly blocking the warmer and moister air to our South for reaching us. This pattern looks to stay with us at least till next week and possible through next weekend. Meaning little to no chance for snow for a while. Expect the weekend to have brilliant sunny skies, cold (minus single and double digits) temperatures and moderate to strong North/Northwest winds.