The avalanche danger is  MODERATE  on slopes above 2,000′ that have seen wind loading by  sustained Northwest winds. Although these wind slabs are expected to  be very stiff and stubborn to trigger, the  possibility remains that slabs could release in steep rocky terrain. In areas that have seen less wind, such as many slopes in the core forecast area of Turnagain Pass, triggering a wind slab is unlikely.

There is a LOW avalanche danger on upper elevation slopes without recent wind loading and all slopes below 2,000′.

*In Summit Lake, Girdwood Valley, and on the southern end of the forecast zone a generally shallower snowpack exists with a poor structure. Wind loaded slopes in these areas have the potential to step down and trigger a deeper avalanche. Please see  the Saturday Summit Summary  HERE.

As Southcentral Alaska sits under a cold, clear and very windy weather pattern, there are areas that have been partially spared by the brunt of the Northwest winds. The ridges along the East side of the road along Turnagain Pass are one of these areas. Folks have been able to find some soft snow and venture further into the mountains without incident. That said, there are areas that have not escaped the major winds. An example would be the Crow Pass region of the Girdwood Valley and the mountains on the Southern end of the forecast zone toward Silvertip. In the Summit Lake area (Summit Snowpack Summary here) two avalanches were seen yesterday on Summit Peak. The key, of course, is to find these sheltered areas, both for better riding conditions but clearly for decreased avalanche danger.

It will be another day to watch for slopes with recent or current wind loading. Ridgetop winds should again be moderate to strong – in the 15-25mph range from the Northwest. However, there is not nearly as much snow to blow into slabs as there was at the beginning of this wind event 4-5 days ago. Most of the loose surface snow has blown away or been blown into hard slabs, crusts and sastrugi at the higher elevations. Things to keep in mind with wind slabs:

Cornbiscuit Ridge on the East Side of Turnagain Pass – one of the ‘less windy’ areas. 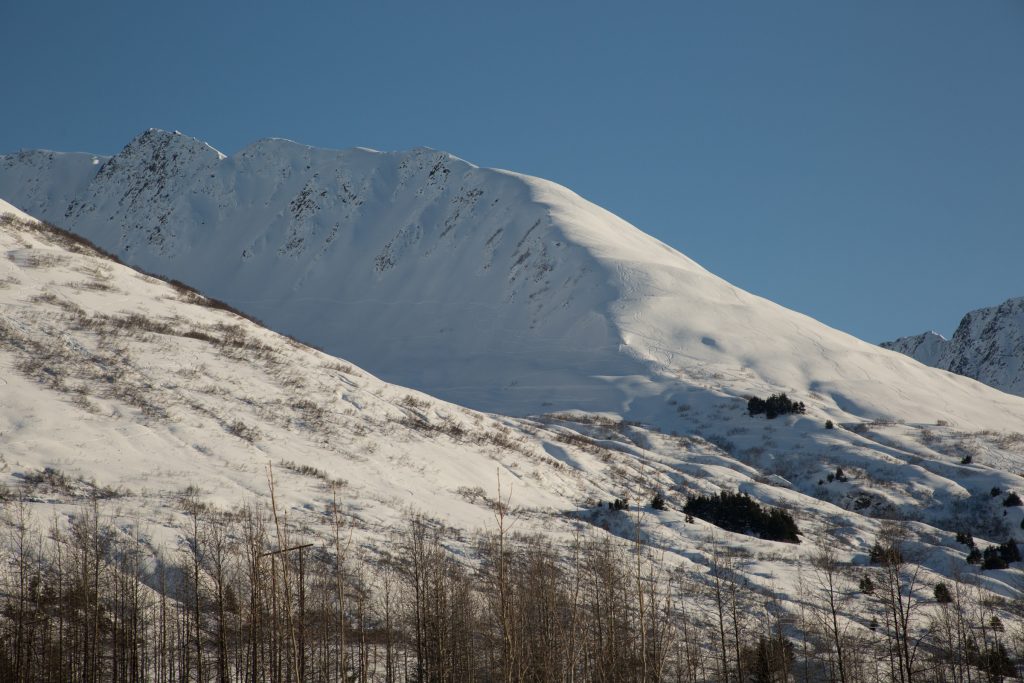 It is good to keep in mind that there are areas in the periphery of Turnagain Pass that have a poor snowpack structure. These layers are buried surface hoar 1-3′ deep and facets in the mid and base of the snowpack. The ‘wind event’ has loaded and reactivated some of these older layers. The most recent avalanche activity was seen yesterday in the Summit Lake area. Besides Summit Lake, other areas of concern include the Johnson Pass zone and some areas in the Girdwood Valley. Continual winds with this relentless wind event may be loading these old weak layers to the point of failure.

Recent natural wind slabs in the Summit Lake area, this is just to the South of the forecast zone, seen and documented yesterday. (A bit complicated, but the point is two of the 4 avalanches in the photo occurred yesterday). 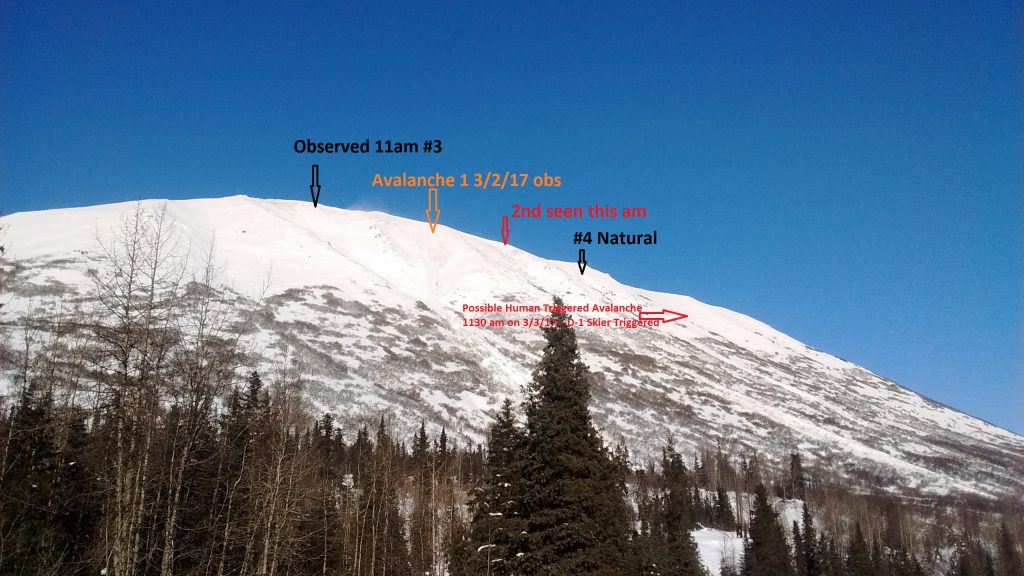 Brilliant sunny skies were over the area yesterday with very cold temperatures at all elevations – in the single digits and minus single digits. Daytime warming allowed the mid and lower elevations to warm into the upper teens and have only cooled a few degrees overnight. Ridgetop winds during the past 24-hours have averaged near 10mph with gusts into the 30’s from the Northwest.

As Southcentral Alaska sits in a holding pattern of sorts, we can expect similar sunny skies today with continued Northwest winds. Temperatures should warm again today into the upper teens below 3,000′. Ridgetop winds are expected to remain from the North and West in the 15-25mph range with stronger gusts.

For Sunday, sunny and cold weather remain. The one change could be another pulse of stronger Northerly winds. This blocking pattern of high pressure over Alaska looks to remain for the rest of the week. Keep tabs on what the NWS is finding at the bottom of their Forecast Discussion – Long Term Forecast!