There is a  MODERATE  avalanche danger in the mountains surrounding Turnagain Pass. Wind slab avalanches around 1-3 feet thick will be possible to trigger above treeline on slopes that were loaded over the past few days. In the lower elevations (below  2,000′, such as the Placer Valley area), watch for persistent soft slab avalanches 1-2 feet thick that could release on a layer of buried surface hoar. Watch for changing conditions. If the approaching storm arrives earlier in the day than forecasted the danger could rise to  CONSIDERABLE. Watch for the winds ramping up and precipitation intensity increasing.
Expect the danger level to rise to HIGH  overnight as a strong storm impacts the advisory area.

Practice safe travel protocols, always carry rescue gear and please let us know what you see out there!!!

Girdwood Valley:  Slabs have the potential to be larger due to more snow that has fallen on a weaker snowpack compared to Turnagain Pass. Avalanches are running to the ground.    Heighten avalanche conditions exist. Careful snowpack evaluation, cautious route-finding and conservative decision making are essential today if venturing into this area. It will be important to keep slope angles less than 35 degrees and avoid being under big runout zones.  Triggering a slab 3′ thick or deeper is more likely in Girdwood and should warrant extra caution!!!  Also heads up for roof avalanches as rising temperatures will make these unsupported slopes unstable.

Placer Valley: In the lower elevations (below 2,000′) watch for persistent soft slab avalanches up to 2 feet thick that could release on a layer of buried surface hoar.

Monday Northeast winds on Sunburst weather station recorded sustained 30-40 mph winds with gusts in the mid 70’s mph. These strong Easterly ridge top winds combined with 8” of new snow have loaded leeward slopes in the Alpine. There was also plenty of snow available for transport and these wind slabs have the potential to be 1-3’ thick on leeward features. In many places in the alpine these wind slabs are resting on old hard wind crust from the wind event prior to this weekend’s storm. This combination was found in steep terrain in the upper elevations over the weekend where several skier triggered avalanche occured. Today it will be best to avoid loaded slopes steeper than 35 degrees where it will be possible to trigger a wind slab avalanche. Look for areas of pillowed or drifted snow and avoid cornices. Feel for hollow feeling snow, stiffer snow over softer snow or slab sitting on hard snow and watch for cracks that shoot out from your snowmachine, skis or board.

A variety of persistent weak layers exist within the snowpack and vary across our region. In the core Turnagain pass terrain these layers have been generally dormant. However Girdwood Valley had a significant natural cycle Monday night that was observed yesterday. Large avalanches are running on basal facets and sliding to the ground. Slopes around Girdwood that have not slid are suspect for human triggering today.

Throughout the advisory area we are concerned about loading these older layers. In parts of the terrain where the snowpack is shallow there are developed basal facets and in many locations there is a mid-pack layer of facets from December. At the lower elevations, below 2,000′, a layer of buried surface hoar exists under the last two snowfall events (1.5-2 feet below the surface). Slab avalanches failing on this layer are possible today where the snow on top is stiff enough to form a slab. Warming temperatures and settling snow have made this the slab more cohesive increasing the potential for a large more connected slab. Observers reported whumpfs on this layer of buried surface hoar at lower elevations yesterday. The lower terrain in Placer Valley is an area where it is possible to trigger a persistent slab avalanche on this layer. All of these weak layers are important to remember as we anticipate receiving a significant load of snow or rain tonight (elevation dependant) into tomorrow!!! 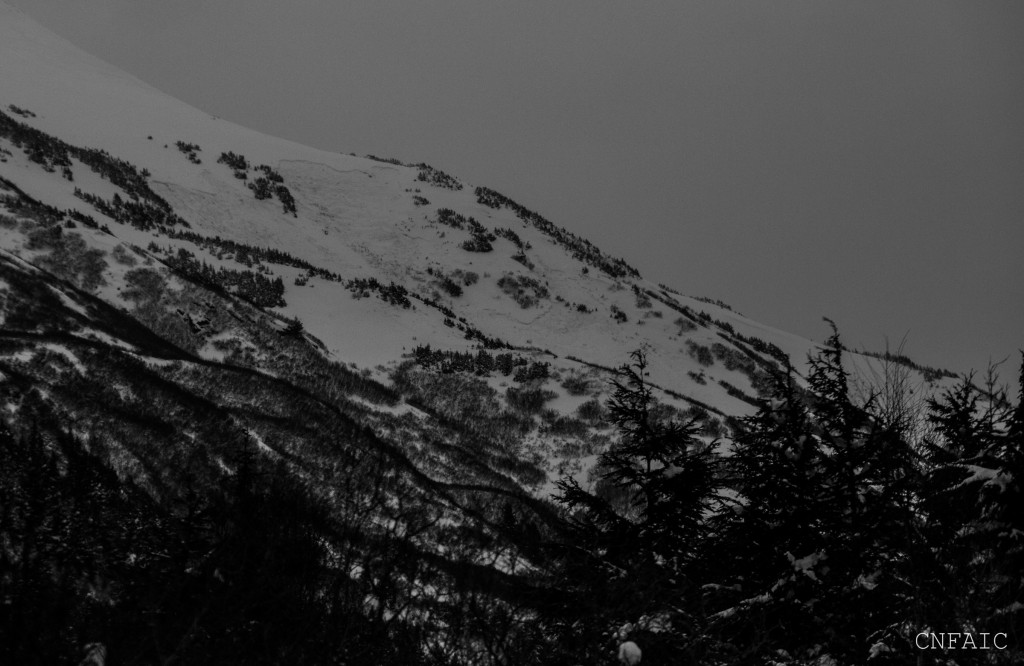 Roof avalanches: Heads up near buildings with loaded roof tops as warming temperatures and possible rain today through Friday will make these unsupported slopes unstable. Many roofs have 2-3’ of heavy dense snow from the last few weeks, which is plenty of snow to bury a child, pet or seriously injure an adult.

Yesterday was mostly cloudy with periods of clearing and good visibility. Temperatures were in the 20Fs at ridge tops and 30Fs in the valleys. A few snowflakes fell in the mountains and some sprinkles of rain below 700′. Winds averaged 10-20 with a few gusts into the 30s in the afternoon.

Today will be mostly cloudy with snow showers throughout the day. There is a small system moving through in advance of a much larger system that is on track to impact the area tonight into tomorrow. 2-6″ of snow is forecasted to fall today. Winds will be easterly 15-25 today with gusts into the 30s. Tonight winds are forecasted to increase with gusts into the 70s. Temperatures will be in the 30s and are expected to increase as warm moist air and winds move into the region. Precipitation will be a mixture of rain and snow depending on elevation. There is still some uncertainty about rain/snow line in this system. Expect periods of heavy precipitation intensity overnight. Snow totals will depend on temperatures but 2″ of water is predicted by tomorrow morning. The storm will continue into the day tomorrow and there is an unsettled weather pattern into the weekend.