An  Avalanche Warning  has been issued for Turnagain Pass, the Kenai Mountains and Western Chugach Mountains and will remain in effect today through 6am tomorrow, Jan.26th.  Heavy snowfall, rain and strong winds are creating a HIGH avalanche danger at all elevations in Turnagain Pass today. A HIGH avalanche danger also exists in Portage, Placer and Girdwood Valley where natural avalanche 3-4′ thick are likely today.  Travel is not recommended in avalanche terrain where natural avalanches are likely occurring due to rapid loading. Later in the day as heavy snow and rain start to diminish human triggered avalanches will remain very likely. Should you decide to check out the conditions keep slope angles less than 30 degrees and steer clear of gullies and the bottom of large and steep slopes in the event an avalanche occurs above you.

New snow and wind have combined to create very unstable slabs 1-3’ range.  Ridgetop winds from the East (SE to NE) have picked up into the 40’s and 50’s mph overnight with serval gusts in the 90’s at Sunburst weather station last night. An additional 10-12” of snow is forecasted for the higher elevations today and will increase the size of these slabs. These slabs will release naturally in steep terrain and could step down into older layers in some locations. Natural avalanches could run the full length of a slope, thus it will be extra important to avoid being near any runout zones today. Avoid places like Johnson Pass where an avalanche could cross the trail. Rapid loading due to heavy snow and strong winds will continue through late morning. Gusty winds are expected through early evening as precipitation dimishes by early afternoon – these winds will make natural avalanche activity likely throughout the day.

This is not a complicated situation.  Avoidance of avalanche terrain is the only way to “manage” this problem today.

Photo of W facing slopes of Eddies following a wind event on Monday into Tuesday that loaded SW aspects. SW aspects will be more loaded today and it will be important to keep your distance from the runout of slopes steeper than 30 degrees.  Photo by Mike Ausman 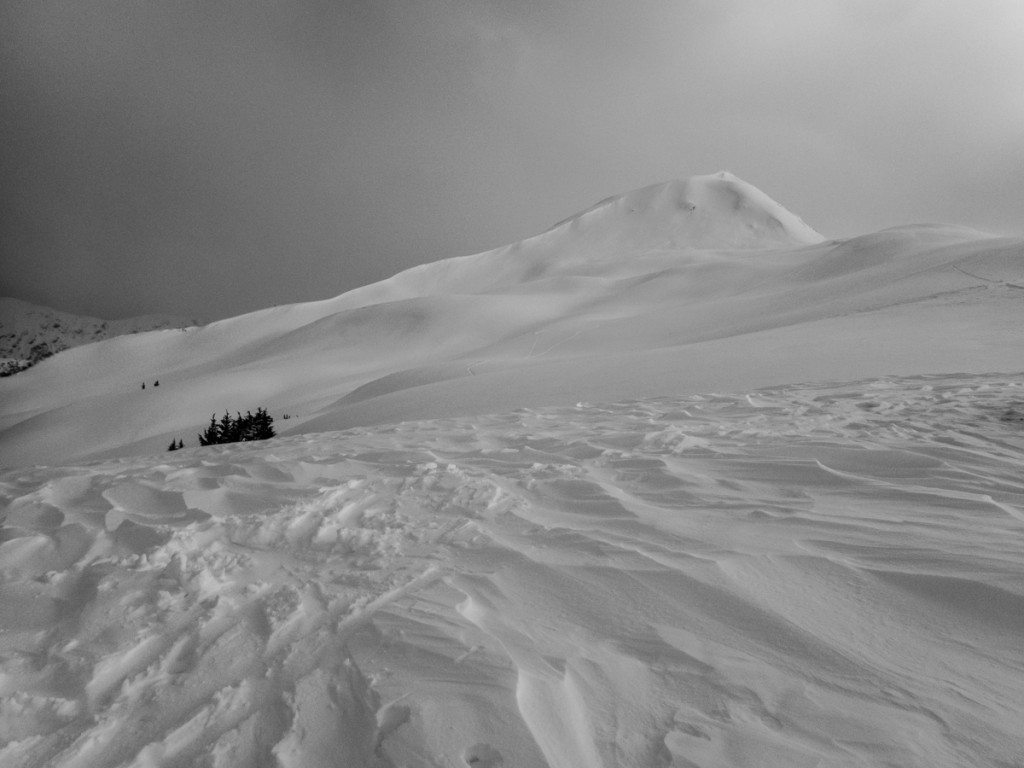 A variety of weak snow (facets and buried surface hoar) that sit near the ground or mid-pack remain the most concerning layers today. Avalanches occurring in the upper layers have the potential to step down and release the entire snowpack in some places. Girdwood Valley and Johnson Pass area have more potential for this to occur where a generally thinner and weaker snowpack exist. In cases where this happens, the volume will be large, could run long distances and potential for burial, if caught, is high.  Avalanches occurring at this layer have a high propagation potential, which means that fractures can and will travel across slopes.

Because of this travel in avalanche terrain is not recommended today including being in the run-out of a steep slope.  Since this problem exists at all elevations, it will be important to avoid the runout of terrain from above when traveling in the flats like in the flats below Seattle Ridge.

An Eastern facing bowl on Raddedtop that released to the ground sometime on Monday during a period with strong winds and snowfall. This is a good example of a thin snowpack in parts of the Girdwood Valley. The debris from this avalanche was is estimated to have run about 1000′. 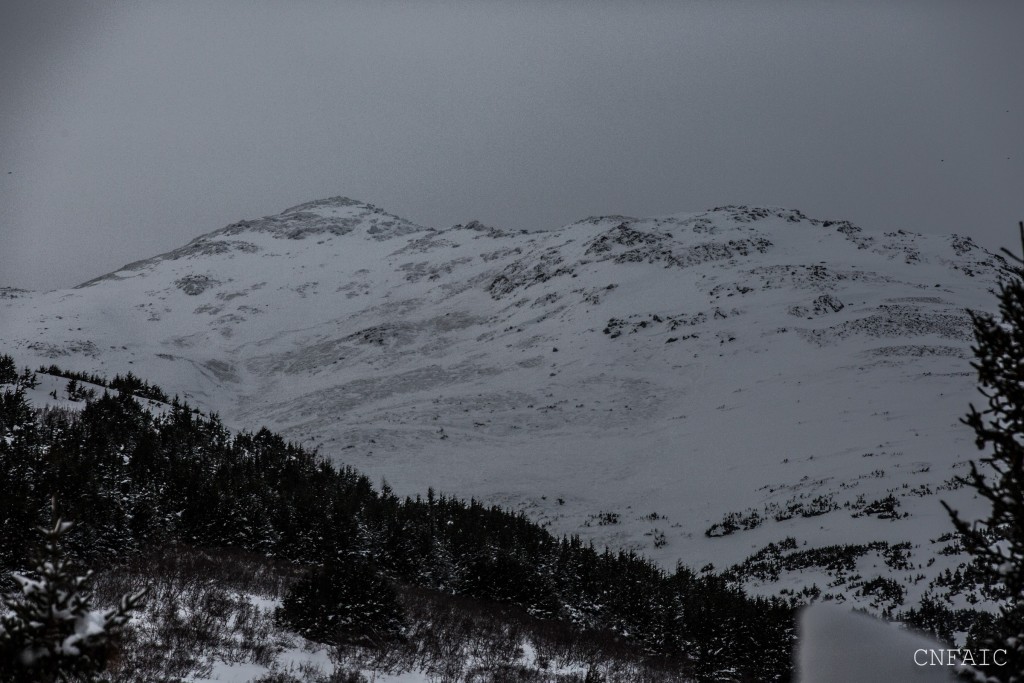 Rain falling on snow to 1,000’ will weaken the surface snow and possibly an older layer beneath. Wet loose avalanches are likely and wet slab avalanches are possible due to a layer of buried surface hoar 1-2’ below the surface. In channeled terrain an avalanche from above will likely entrain weak snow in the lower elevations increasing overall volume. Don’t under estimate small terrain features with high consequences. Triggering a wet slab in the lower elevations of Twenty mile or Placer could have high consequences if pushed into or over terrain traps such as cliffs, gullies, or trees. Again it will be important to avoid steep terrain and maintain a conservative distance from all run-out zones.

Yesterday above freezing temperatures were observed along Turnagain Pass with light rain late afternoon. Moderate Easterly ridge top winds increased to strong in the afternoon. By early evening winds were averaging in the 40-50’s mph with several gust in the 90 mph’s on Sunburst weather station. Overnight about 12 € of snow fell in upper elevations (1.3 € H2O) in Turngain Pass and Girdwood.

Today as an intense front moves through our region heavy precipitation is expected to last through late morning, this is snow above 1000′. Strong Easterly ridgetop winds will diminish to moderate (15-25mph) by late afternoon, but expect gusts to still be in the 40’s mph. Expect above freezing temperatures near sea level today and rain/snow line could be as high as 1000′.

Tonight temperatures are expected to cool off bringing snow to lower elevations. Another low pressure system centered over the Bering is expected to move through our area Friday and into the weekend with another chance for snow fall.