Avalanche danger remains MODERATE today in the alpine (above 2500′) where lingering wind slabs 1-3′ deep may prove reactive in steep terrain greater than 35 degrees.  Skiers/ snowmachiners, direct sun or cornice fall are all likely triggers, particularly later in the day.   It’s that time of the season here in south central Alaska where solar input and aspect begins to play a more prominent role in our avalanche problems on sunny days such as today, and the rest of this week.

In the treeline elevation band (1,000′ €“ 2500′) the danger is also MODERATE,  where the potential for glide avalanches continues to keep us on our toes.   Generally a change in weather has been a catalyst to see glide avalanche movement.   We can expect a significant weather change today in the form of sunshine and clear skies.

Overall, we’ve seen good bonding across most of the advisory area between last weeks warm storm and our previous surface.  However, skiers yesterday found sensitive wind slabs/ storm slabs in steep, leeward terrain (SW) in the alpine on the tail end of this storm.  See photo below and more info on 2 separate skier-triggered avalanches in the Goldpan area here and here.  It’s possible that a persistent weak layer was the culprit in these avalanches and serves a good reminder of spatial variability across a zone or even slope, as one observer pointed out.

The big game-changer yesterday was sun and rapid warming in the afternoon hours.  Likely the increased solar input and warm ambient temperatures played a role in weakening these fresh (relatively dry) slabs, which were subsequently triggered by skiers. We look to the sun this time of year to reverse our vitamin D deficiencies, but the snowpack can see it as quite a shock to the system, espesially after the persistent stormy pattern we’ve seen most of the winter.  With sunshine and mostly clear skies on tap today and the remainder of the week, it’ll be prudent to pay attention to changing surface conditions and where you are on a particular slope as the afternoon heats up.  Avoid steep (>35 degrees), leeward slopes (South and west) late in the afternoon when the sun is at its strongest.  Increased rollerball activity is a good indicator of the snowpack heating up rapidly and a sign that the surface is weakening. 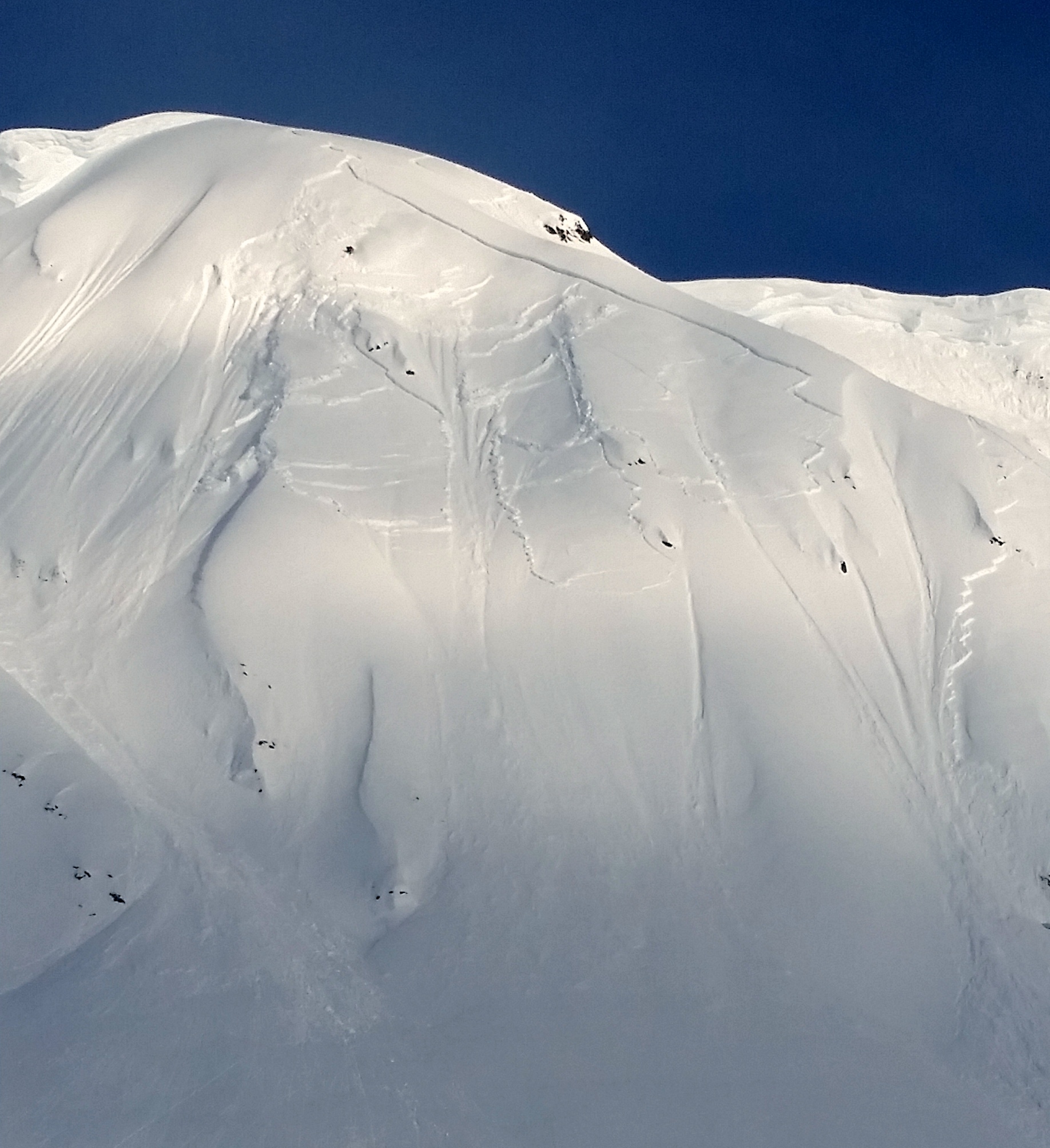 This photo was captured just after the snowboarder (mid-slab) initiated the avalanche. This ~18″ slab was triggered late in the day as he entered a steep convexity on a WSW aspect at approximately 4,000′ in Goldpan.  More info and photos can be found on our “Observations” page here.  Far lookers right in this photo you an see the flank of another skier-triggered avalanche triggered earlier in the day.

Between Sunday afternoon and Monday morning the SW ridge of Magnum shed a sizeable cornice onto the slope below.  Seeing these fail naturally tells us that many more are close to their tipping point.  Cornices are at their largest that we’ve seen all winter right now.  Again, direct sun and warm temperatures acts to weaken these bonds until that point of failure.  Steer clear of cornices and if travelling along a corniced ridge, maintain an extra wide margin between your party and the edge. 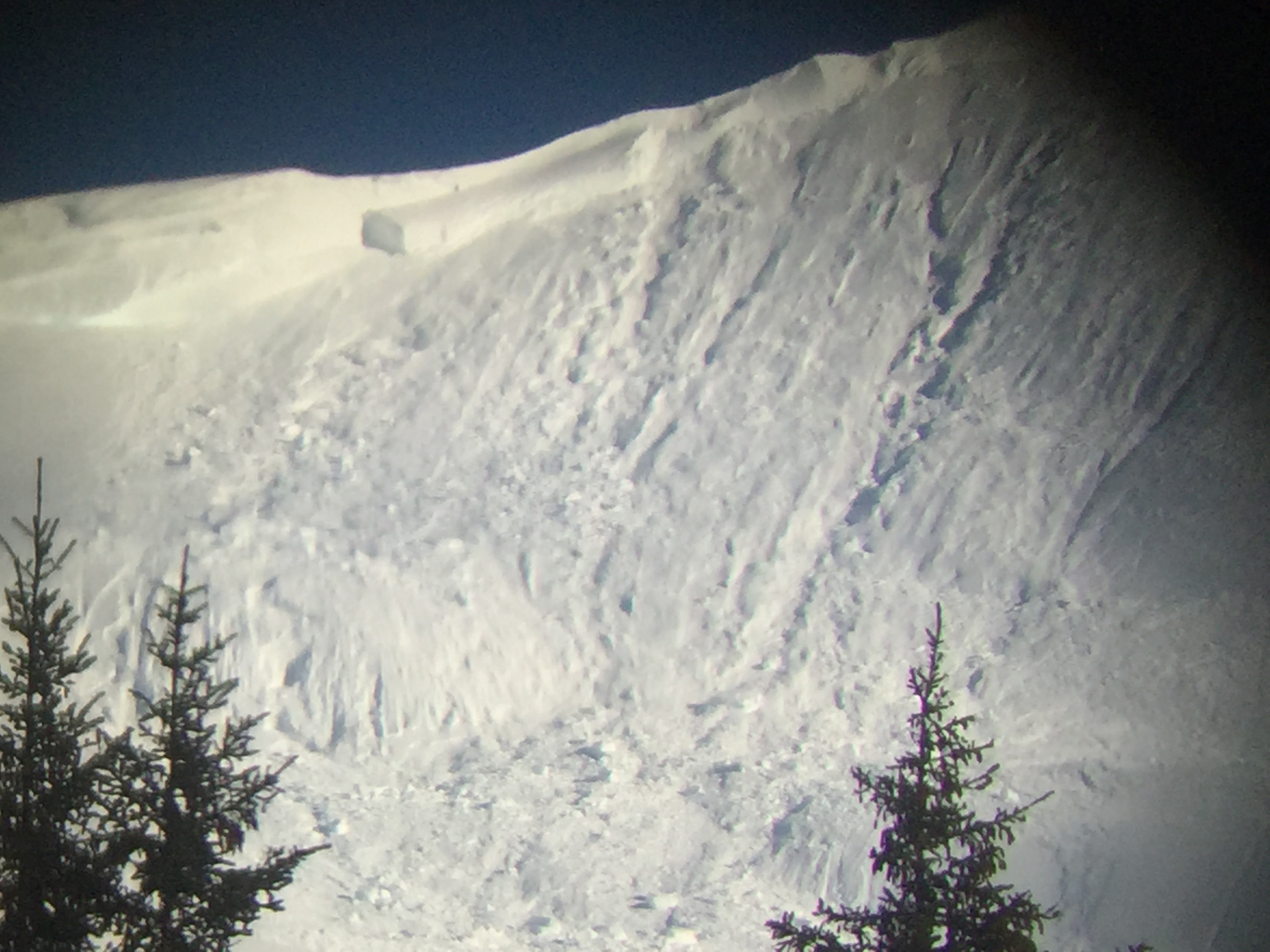 Large cornice fall on the SW ridge of Magnum as seen from the Seward highway.

Another sun-affected avalanche problem, (sensing a theme here today!) wet loose debris could entrain enough snow in channeled terrain to be a concern.  Expect this problem to be relegated to a distinct elevation band roughly in the 1500 – 2500’ level, similar to where we are seeing glide avalanche activity. 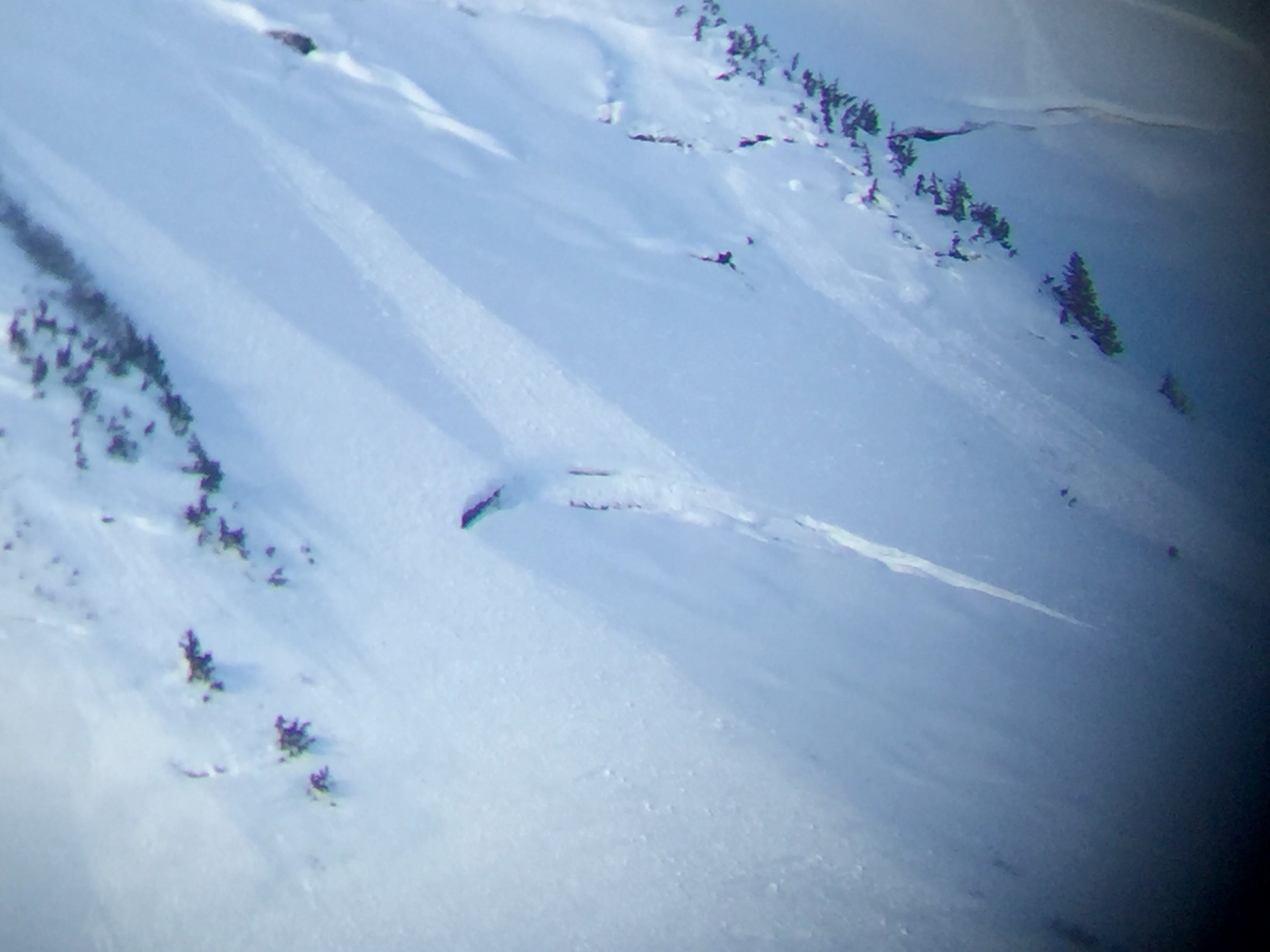 Wet loose avalanche debris running into and over glide cracks on the East face of Seattle ridge yesterday.

Warm temps, rain, wet snow and now sun, have been adding weight and stress to glide cracks throughout Turnagain Pass. These unpredictable hazards cover many steep slopes between 1000’ to 2500’ and continue to release without warning. Look for the large upside down ‘brown frowns’ and avoid time spent below glide cracks. Several glide cracks have released in the last few days including another large, full depth glide avalanche on Sharks Fin. 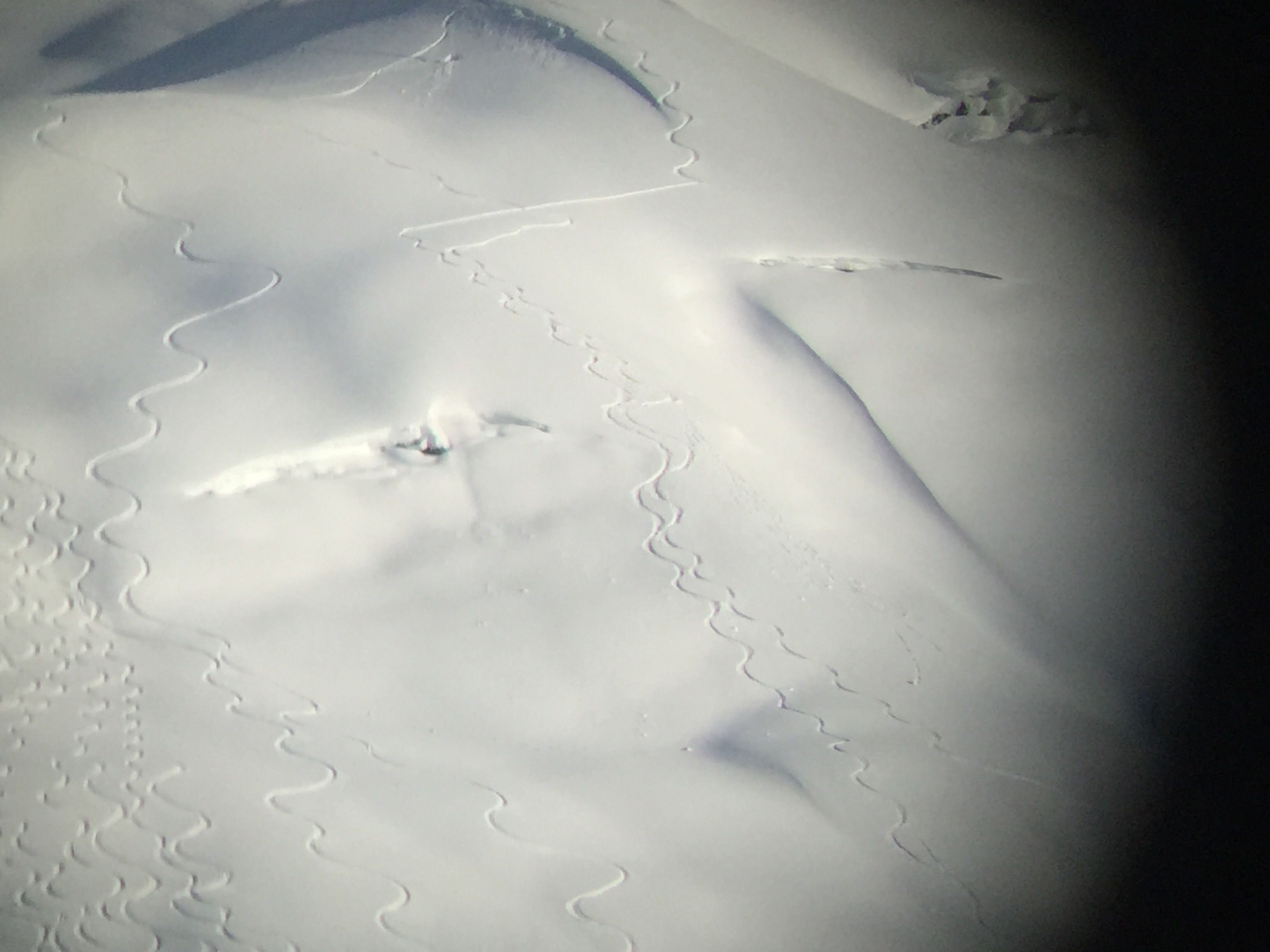 Yesterday afternoon marked the beginning of a noticeable pattern change away from warm, stormy weather to clearing skies, sunshine and light winds.   As the sun came out, mid-afternoon temperatures spiked to 36 F at 1,000′ and 39 F at sea level.   Ridgetop winds were light from the East before changing directions to the Westerly overnight.   No measurable precip fell yesterday.

Overnight temps have dropped with the clearing skies to the low 20’s at 1,000′.   Today we can expect mostly sunny skies and temps to warm into the mid- 30’s at the road elevation. Ridgetop winds will be light from the NW.

Mostly sunny skies look to be in the forecast for the remainder of the workweek!