The avalanche danger remains  MODERATE  today in the Alpine (above 2500′) where lingering wind slabs 1-3′ deep may prove reactive in steep terrain greater than 35 degrees. Skiers/snowmachiners, direct sun or cornice fall are all likely triggers, particularly later in the day when daytime temperatures peak.

In the Treeline elevation band (1,000′ €“ 2500′) the danger is also  MODERATE,  where the potential for glide avalanches continues to be an issue.

Do you frequent Hatcher Pass? Mark your calendars!

Saturday, February 20th  Hatcher Pass Avalanche Center is having their annual fundraiser at Gov’t Peak Chalet near Hatcher Pass. This event will feature a slide show by local climber and ski mountaineer, Kirsten Kremer,  a Silent Auction, Live Music and FUN!  Click  HERE  for more info on both events.

Lingering wind and storm slabs will still be possible to trigger in steep (>35 degree), wind-loaded terrain. Observations yesterday identified a weak interface in the snowpack at the boundary of the most recent storm and the snow surface it landed on, approximately 15-20″ below the surface. Preserved precipitation particles remain sandwiched between stiffer snow layers above and below and were still reactive in stability tests. We suspect this structure combined with rapid warming and sunshine were reason the skier triggered wind slab avalanches in Goldpan area occurred on Monday and what the cornice triggered slab avalanches are running on as well. Avalanching has not been widespread and in general the snowpack has shown good bonding. However, this particular set-up needs to be considered, especially later in the day. In the Girdwood Valley, a thin rain crust was observed up to 3100′ as the bed surface of wind/storm slabs that released during avalanche mitigation.

We have reached the time in Alaska where sun is a now a factor. ‘It feels like spring’ has been the general sentiment. Pay attention to increased solar input, warm ambient temperatures and changing surface conditions in the terrain you are traveling through. Warming may make slabs easier to trigger with the weight of a skier or snowmachine. Increased rollerball activity is a good indicator of the snowpack heating up rapidly and a sign that the surface is weakening. Avoid steep (>35 degrees), leeward slopes (South and West) late in the afternoon when the sun is at its strongest.

Another look at at the skier triggered avalanches in Goldpan on 2/15. 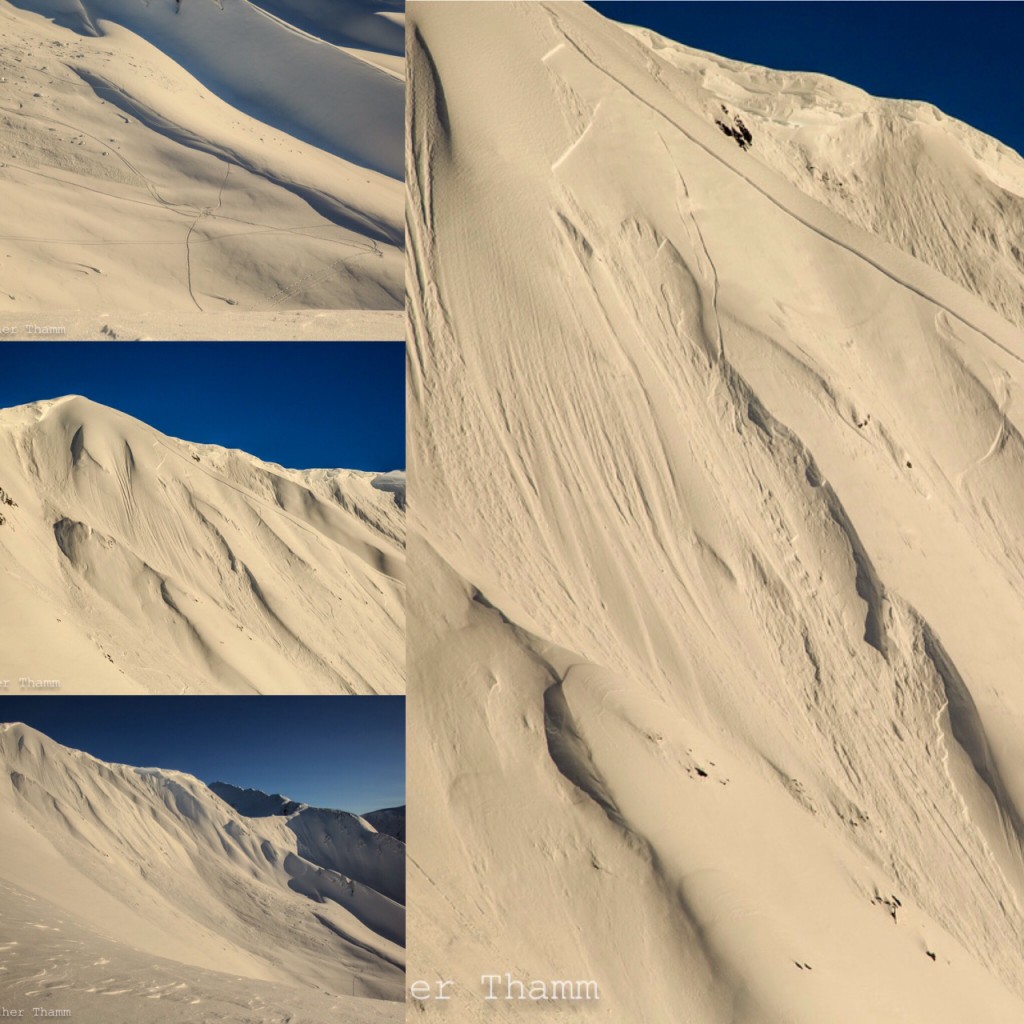 Yesterday we were able to get a closer look at the cornice fall on the South side of Magnum. It ran all the way to the drainage below and had pulled pockets of slab out with it. It covered the region where the skin track often goes. There were a number of reports from the advisory area of other large cornice falls that triggered the slopes below. Cornices will continue to be tender and travel on or below should be avoided. Remember they can break farther back than expected. Warming temperatures in the afternoon and direct sunshine may increase the hazard for both natural and human triggered cornice fall. 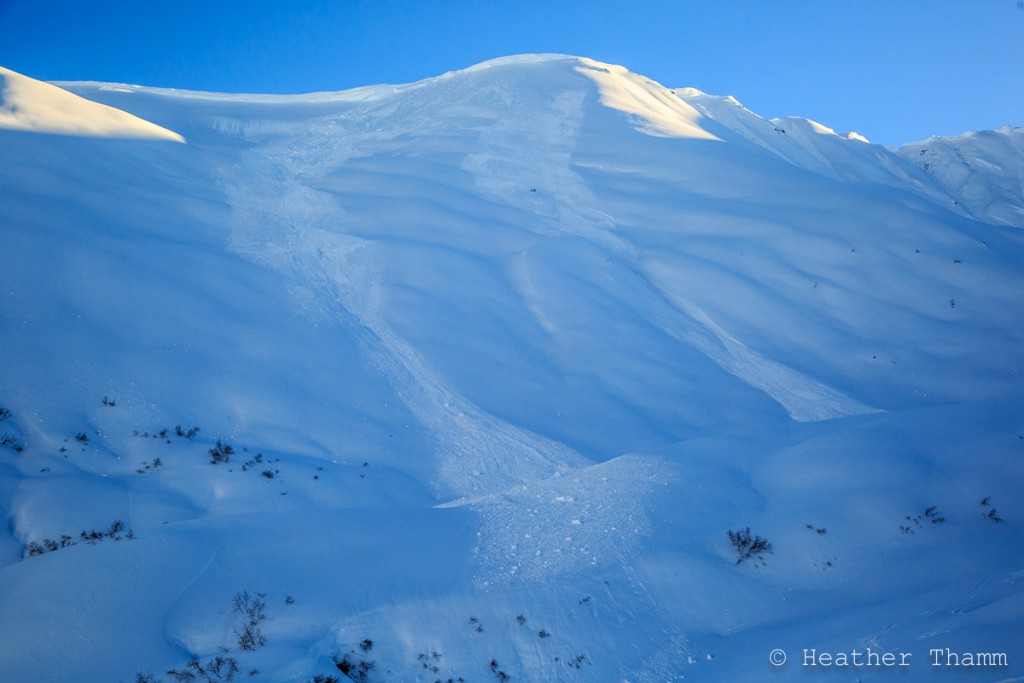 The glide avalanche problem continues. We observed two recent releases yesterday and glide cracks grow daily. All that needs to be said is avoid travel underneath glide cracks. 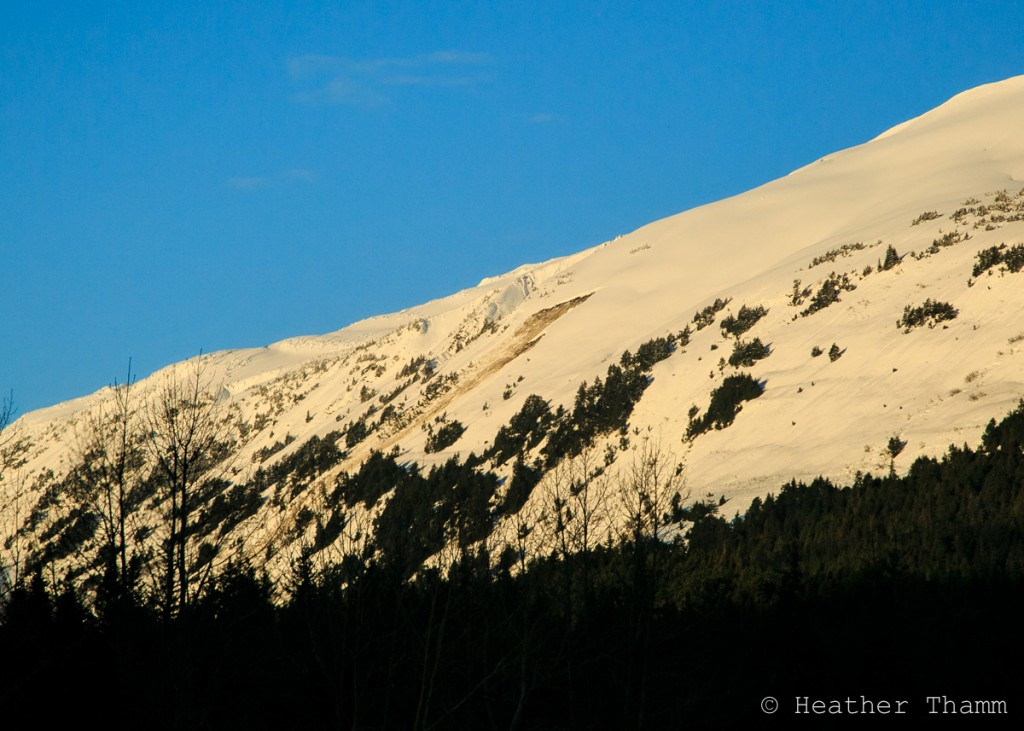 Yesterday was mostly clear with periods of valley fog. Temperatures were in the low 20Fs to mid 30Fs. Winds were light and variable. Skies were mostly clear overnight.

Today will be mostly sunny with a chance of valley fog. This afternoon may become partly cloudy. Temperatures will be in the mid 20Fs to mid 30Fs and winds will be Easterly 15-25 mph.

Tonight will be partly cloudy with another day of sunshine on tap for tomorrow as we sit under a ridge of high pressure for a couple days.