On the afternoon of Monday, 2/15/2016 we toured from the Corn Biscuit parking lot. We followed the drainage up into Superbowl. Skinned up Superbowl, then followed the ridge past Basketball Run to Gold Pan. We skied a lap in Gold Pan, where a member of our group triggered an alarming avalanche. Then we skinned back to the top of Superbowl and descended back to the car.

On the initial ascent, once above the rain crust, we immediately began observing wind affected snow. This wind affect was very spatially variable, in places the snow was perfect settled powder, 10 feet later there would be a 3 inch thick slab, then settled powder, then a zipper crust, etc. This continued as we ascended Superbowl. I monitored this surface wind layer with pole probing, quick hand pits, and reviewing my switchbacks. Just short of the pass, one of my switchbacks cleanly broke off 6 inches down. I proceeded about 10 feet and dug a pit on a NW aspect. As mentioned before, surface conditions were very variable over a small scale. Within that 10 feet the obvious surface slab was gone. My ECTP did not fail on this surface instability. Rather, it failed 50 cm down at 29 taps where it popped cleanly and energetically. The failure appeared to be on BSH ~ 5 mm in size. At the convexity immediately below the saddle the surface wind slab had increased to ~ 12 inches thick and sounded hollowed, but did not move as we booted thru it.

At the saddle we could see that about 4 people had already skied some of the spines in Gold Pan. They had broken loose a couple small pockets and sloughs that did not seem particularly significant at the time. We also noticed ongoing small roller ball formation. We followed the ridge to our drop in points on Gold Pan. Two of us dropped about 100 vertical feet below the summit, while the third member of our group continued to the top. The two of us then dropped finding heavy, lightly sun affected snow. The only possible signs of instability we encountered where the roller balls and sun affect.

We watched from below as the third member of the group dropped. As he rode over the convexity into the extremely steep terrain, the slope shattered at his feet, and propagated back up behind him. I think this aspect is WSW. He immediately tried to egress the slope at an angle as the slide accelerated rapidly around and ahead of him. Quickly, the majority of the mass of moving snow was in front of him. He was hard to see thru the powder cloud, but seems to have basically stayed on his feet thru the whole thing. At some point he pulled his airbag, though this not what prevented him from being buried or entrained further. Watching the wall of snow approach us was rather alarming, especially its freight train-esque thundering.

Back at the top of Superbowl, I stomped repeatedly on the above described wind pocket. It did not budge. Nor did a ski cut produced any results. On the ski back to the car, there were lots of new roller balls on the south side of magnum. 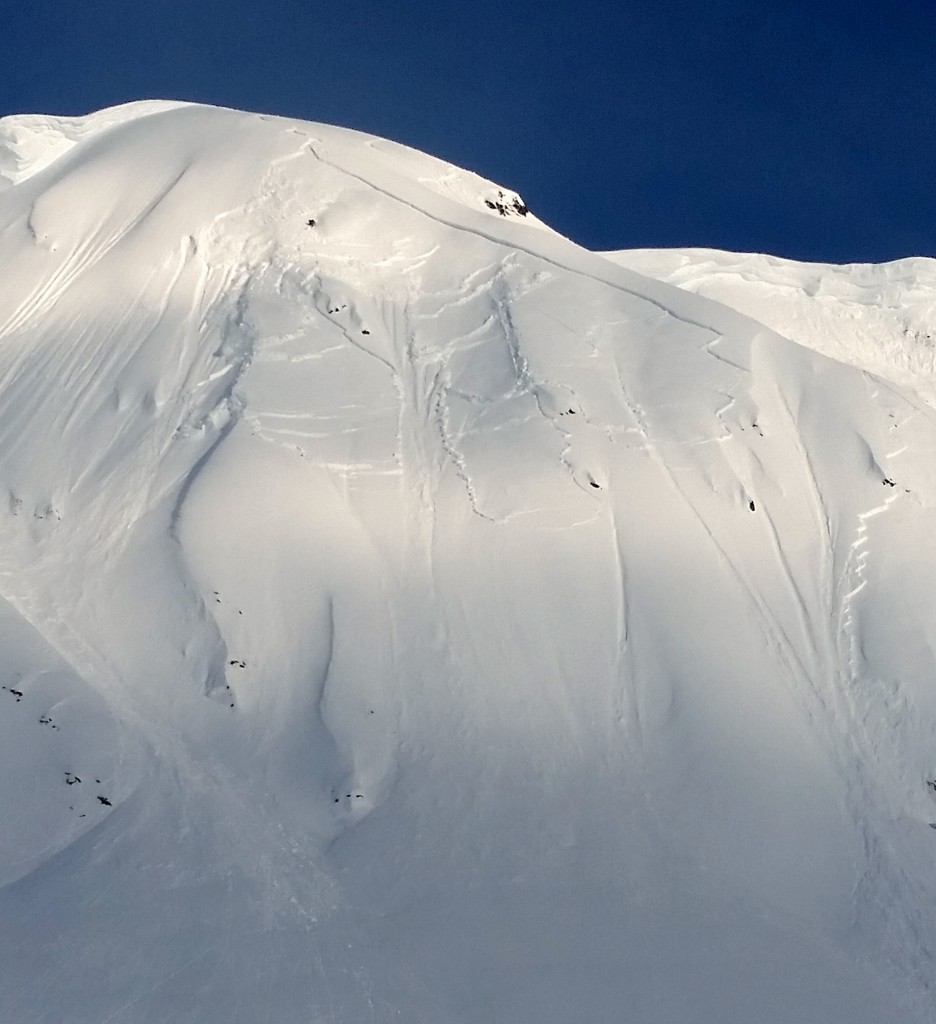 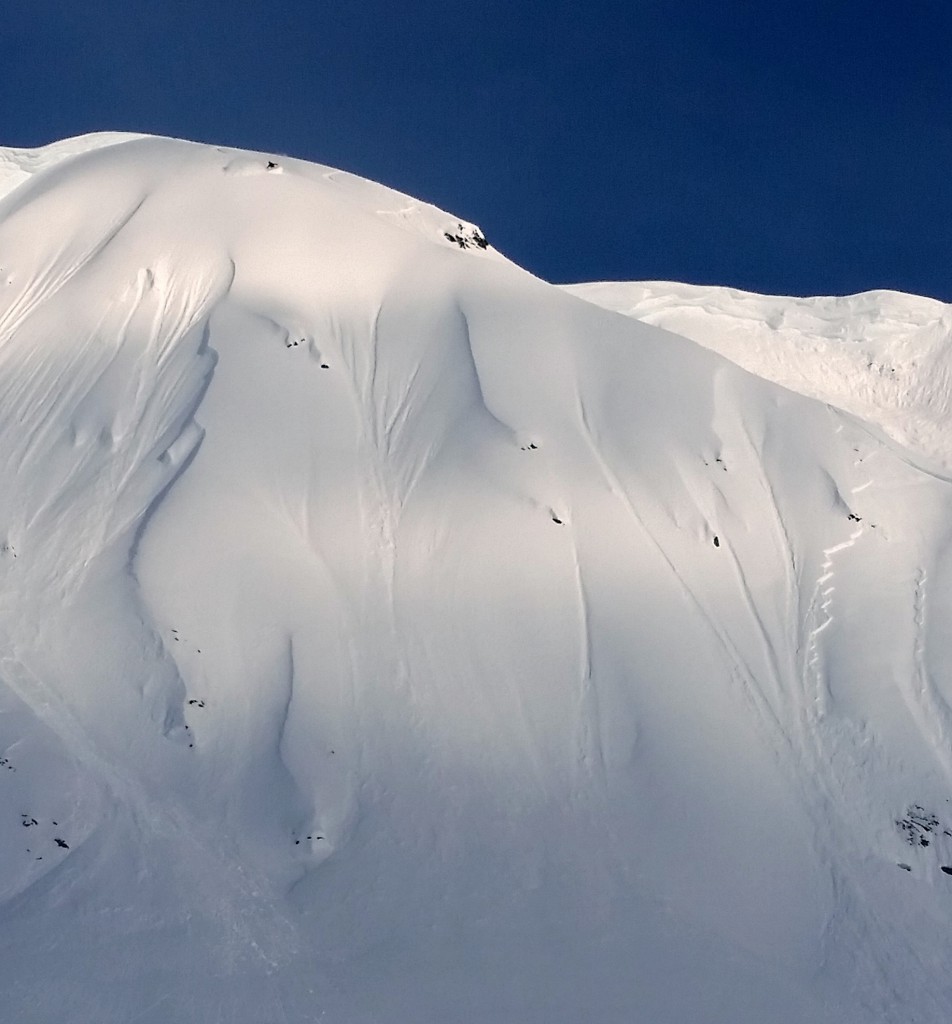 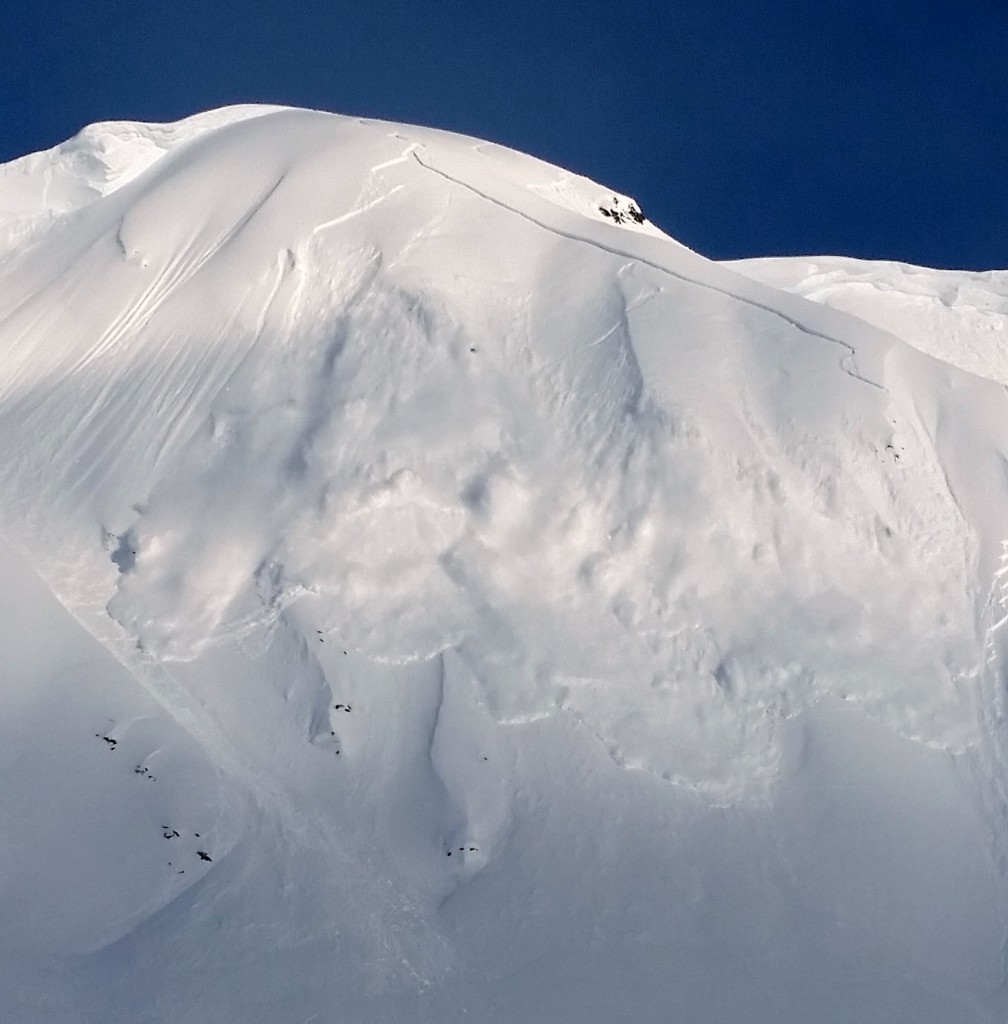 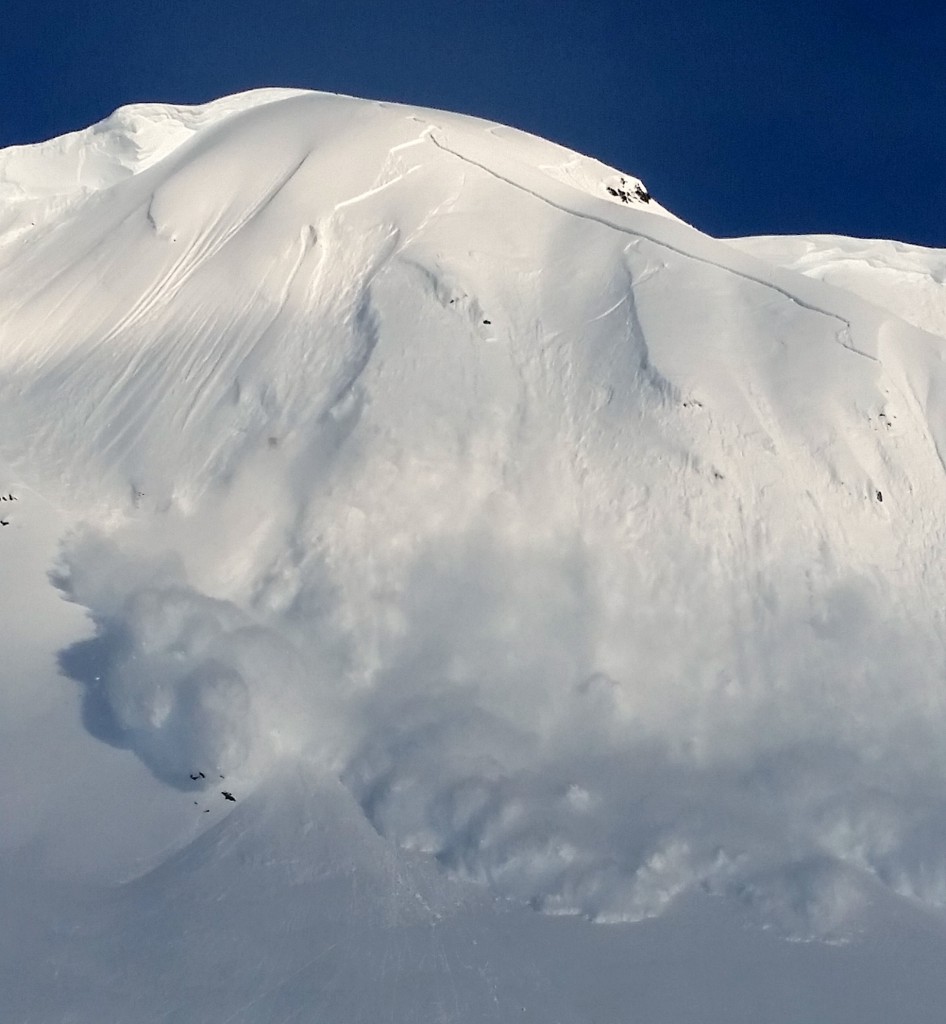 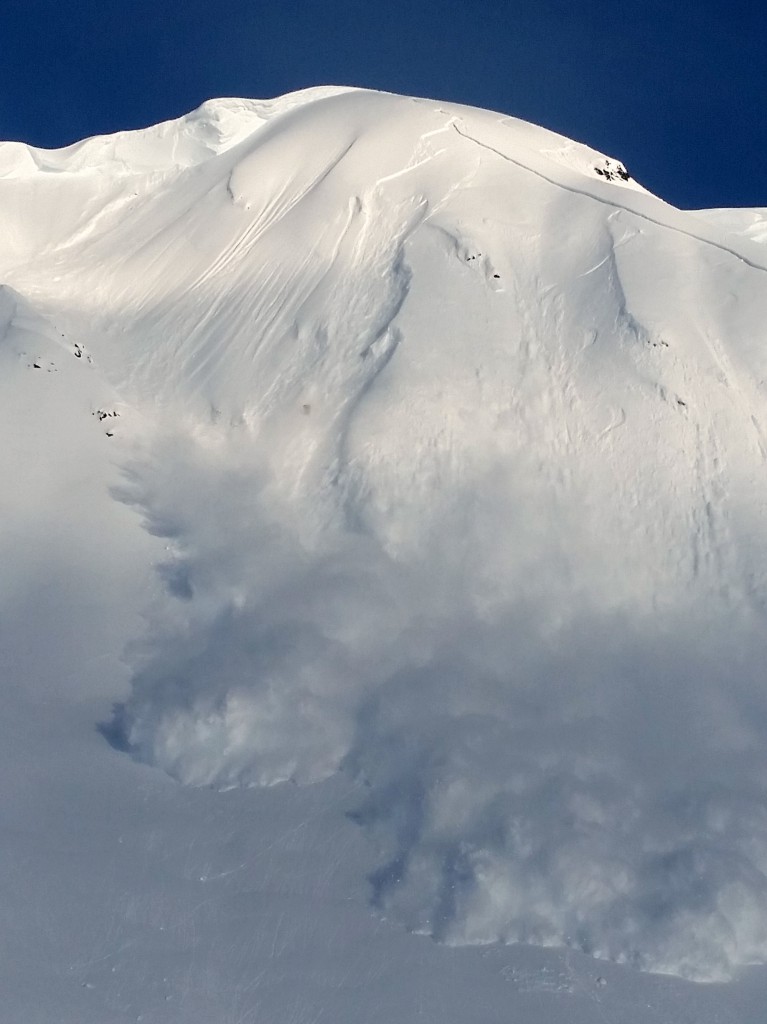 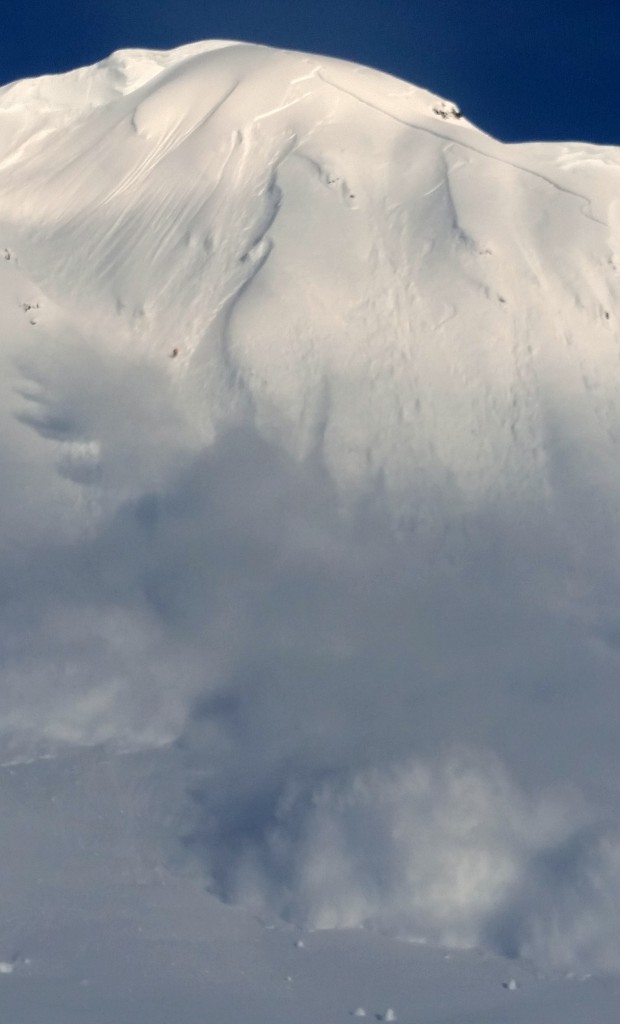 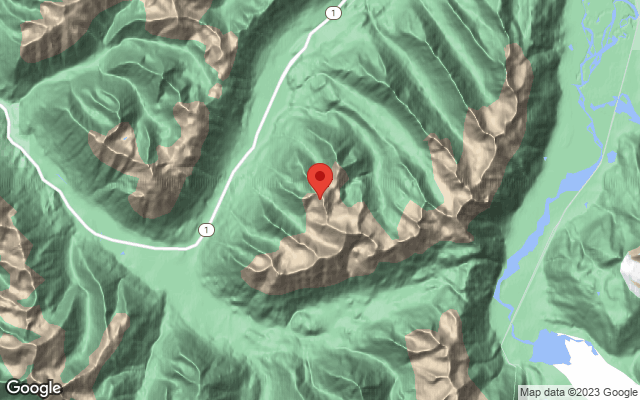