The avalanche danger is CONSIDERABLE above 1000′ today. Based on new reports yesterday, large human triggered avalanches 2-3′ deep on a weak layer of sugary faceted snow are possible today. Remote triggered avalanches are also a concern, which means you can trigger an avalanche from flat terrain and have it release on steeper terrain above, to the sides, or below where you are travelling. Conservative terrain selection is recommended. Below 1000′ the avalanche danger is MODERATE.

PORTAGE/PLACER: This area just opened to motorized use on Friday, so we have zero avalanche information from this zone. Please approach the mountains with caution and share your observations with us!!!

Chugach State Park: A large avalanche in the Hiland Road area was reported Thursday, which had very wide propagation on Harp Mountain. This is a strong indication that a persistent weak layer exists in the area that could produce more large avalanches.

BECOME A MEMBER IN DECEMBER!
If you use the forecast, we could use your help! Did you know that the best way to support the Chugach National Forest Avalanche Center is to become a member of the Friends, the cost-share nonprofit that supports our efforts? Memberships start at just $20, and every member who joins or renews will be entered to win one of the fabulous prizes from our sponsors. Make your gift today! https://www.cnfaic.org/friends/donate/

Girdwood Valley – Lots of avalanche activity in the upper Girdwood Valley after the most recent snowfall on Wednesday and Thursday. We saw evidence of at least 5 large avalanches in the Crow Creek area during our field day yesterday. These released on a variety of different aspects with start zone elevations ranging from 2500′ to 3500′. The largest avalanches were failing on a layer of facets on top of the Thanksgiving melt freeze crust which resulted in wide propagation. 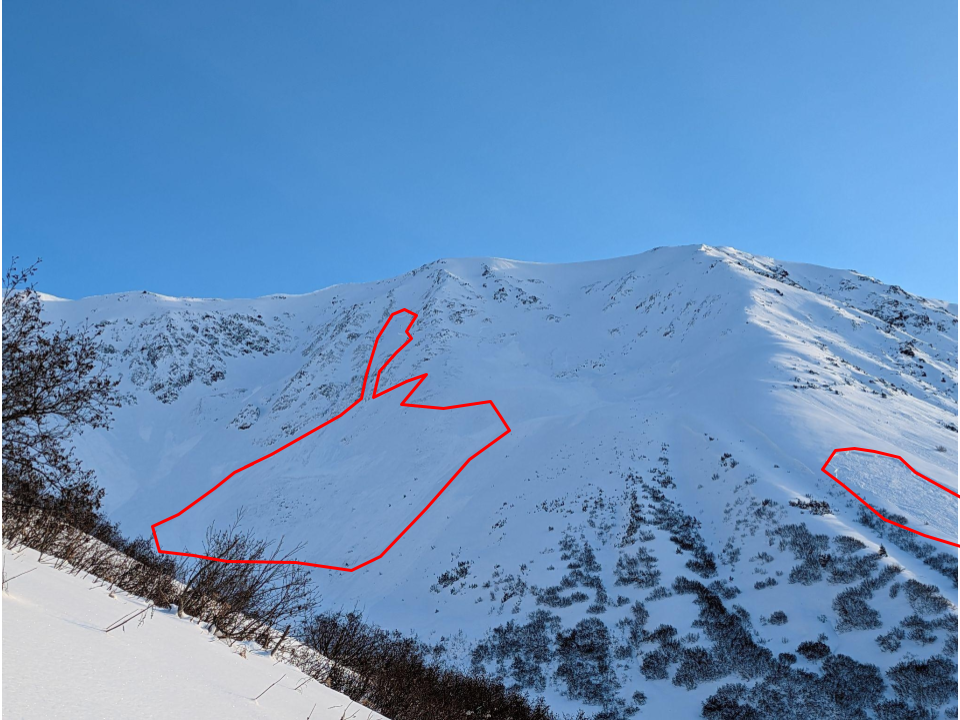 Two large natural avalanches that released on a layer of facets above the Thanksgiving melt freeze crust. Photo 12.16.22 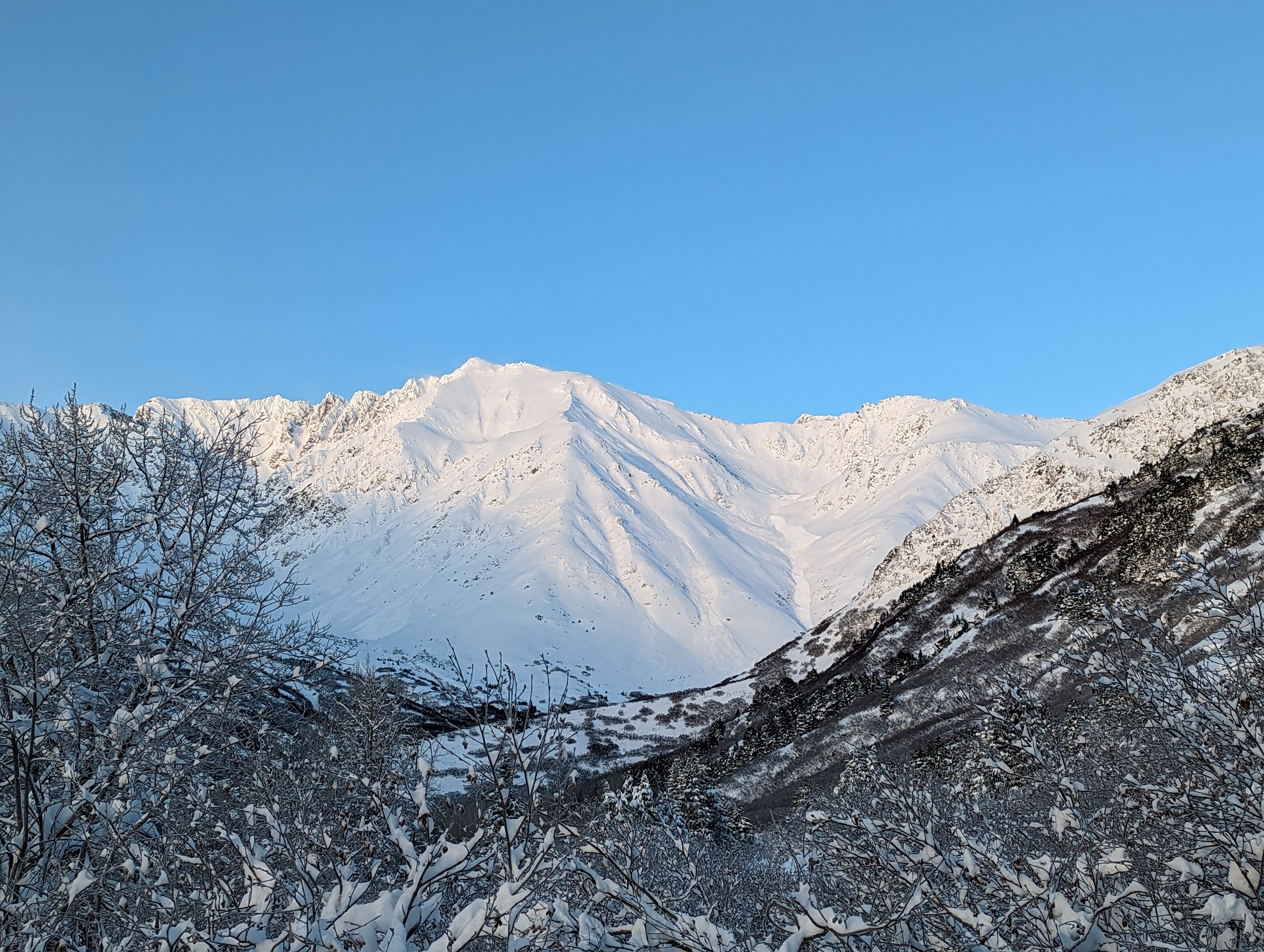 Several more large avalanches near Magpie Peak which is close to the Crow Pass trail head. The combination of weak snow and wind loading on Thursday was enough for widespread natural avalanches in this area. Photo 12.16.22

Based on new observations yesterday (Crow Creek Area, Taylor Pass, Cornbiscuit) we believe a layer of faceted snow on top of the Thanksgiving melt freeze crust is the culprit for several large avalanches and large collapses across the forecast area. The Girdwood valley seems to be the most active area where avalanches have been releasing 2-3′ deep on this layer. However, several observations of large collapses from the skiers side of Turnagain Pass also indicate that this weak layer is reactive and could produce large avalanches. Based on this new information we are recommending a conservative mindset when travelling in the mountains today. Remote triggering avalanches is a strong possibility with this type of weak layer. That means you can trigger an avalanche from low angle terrain that could release on steeper terrain above, below, or to the sides of where you are travelling.

The most likely place to find these conditions are in areas with a relatively thinner and weaker snowpack. Due to early season conditions we have not been able to access large sections of the forecast region, like the southern end of Turnagain Pass near Johnson Pass trail head and Lynx Creek. These areas typically harbor a thinner snowpack compared to the northern end of the pass and we think it is likely that the weak layer is more reactive in these thinner areas. There is a lot of uncertainty in how widespread these conditions are in Turnagain Pass, so please let us know if you hear any large collapses or see recent avalanche activity on this layer today!

Wind Slabs lingering at upper elevations are also a concern today. These are most likely to be found along ridgelines and wind loaded gullies. Keep an eye out for stiff and hollow feeling snow, shooting cracks, and pillowy looking wind drifts to identify areas that could be harboring wind slabs.

In areas protected from the recent winds dry loose avalanches (aka sluffs) are likely with the soft snow on the surface today. The snow surface is faceting with the cold temperatures and clear skies which can cause fast running sluffs in steep terrain. 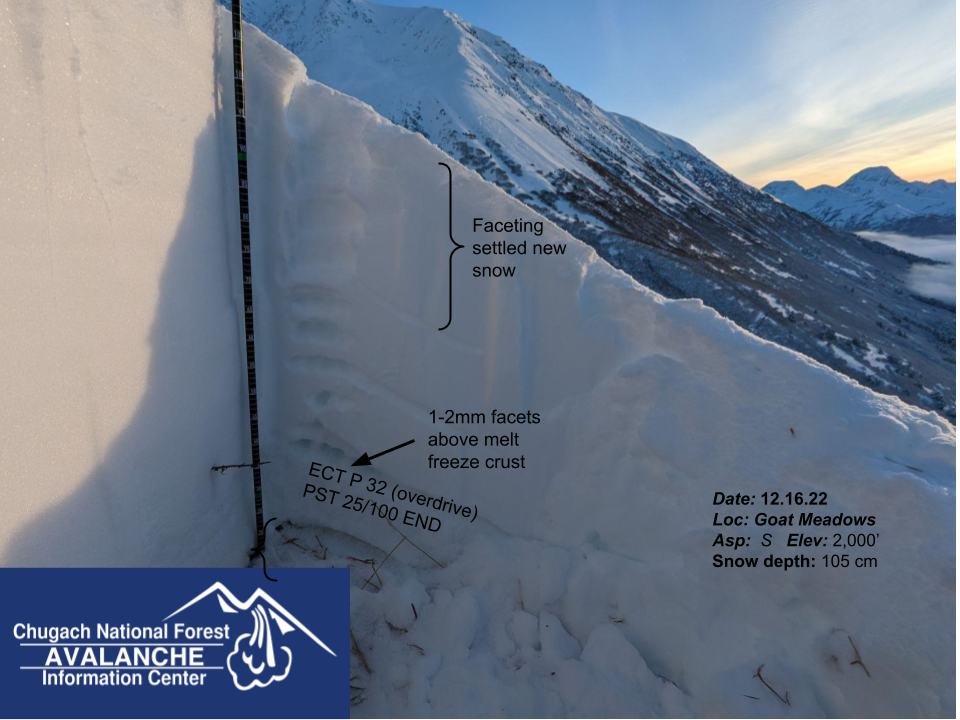 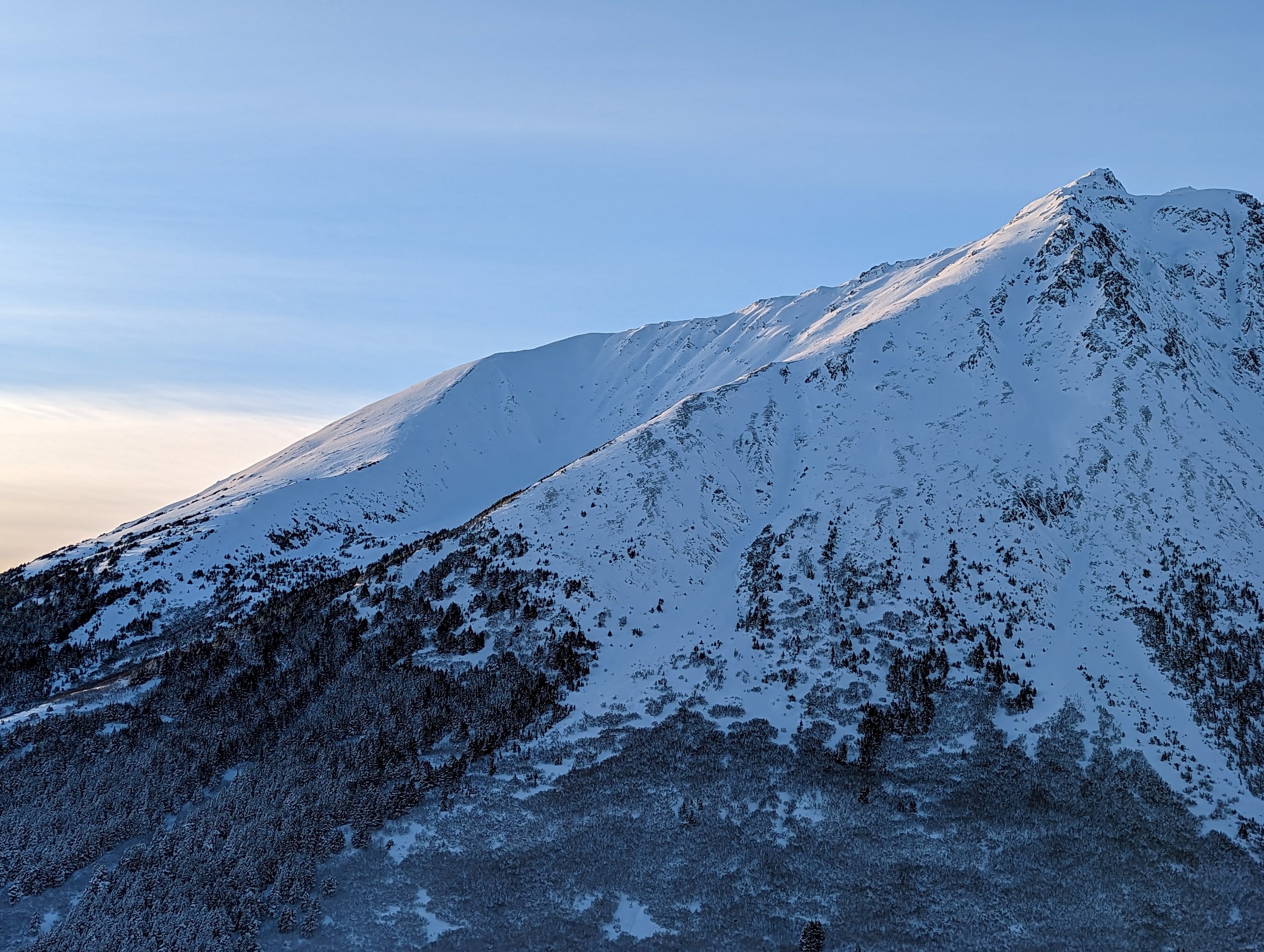 Yesterday: A temperature inversion was in place yesterday, which kept a thin layer of clouds in valley bottoms with clear skies and warmer temperatures above. Winds were mostly light in the 0-10 mph range, with the exception of some stronger gap winds in the morning affecting higher peaks. No new snow.

Today: Weather conditions today, and through the next several days, look very similar to Friday with cold temperatures and mostly clear skies. Temperature inversions could cause valley fog with clear skies above. Currently, temperatures are in the -10 to 10 F range at lower elevations and 15 to 25 F at upper elevations. Winds should stay light today out of the SE at 0-5 mph.

Tomorrow: Temperatures will continue to get colder tomorrow with highs in the single digits at all elevations. Some high clouds could move through the area. Winds should remain light out of the SE. No new snowfall expected.