The avalanche danger is MODERATE at elevations above 1,000′. The snowfall and winds have moved out of the Turnagain forecast zone and our main avalanche issue will be triggering a lingering wind slab avalanche. Wind slabs could be up to 2′ deep and will be found on windloaded slopes and in cross-loaded gullies. Additionally, sluffs on steep slopes will be possible in the soft snow. The danger is LOW below 1,000′.

GIRDWOOD VALLEY:  Triggering a slab avalanche breaking under the storm snow may be possible due to an unusual avalanche seen yesterday. Until we know more, watch for unstable snow in sheltered zones as well a wind slab that could release larger than anticipated.

SUMMIT LAKE:  A much shallower snowpack exists in the Summit Lake area. Weak snow has been found under the recent storm snow and triggering a slab avalanche breaking in a buried weak layer is a concern. The danger here could be more on the CONSIDERABLE side; careful route-finding and a conservative mindset are key.

A large storm slab avalanche was seen in Girdwood yesterday morning, on the lower east face of Raggedtop. There was also a slide reported on the Goat Mtn shoulder (southerly facing) that was a deeper slab and may have broke in a weak layer under the storm snow (this is the unusual slab seen in the Girdwood Valley). Otherwise, several shallow slab avalanches and sluffs were seen yesterday morning composed of the 6-8″ of new snow from Wednesday night. 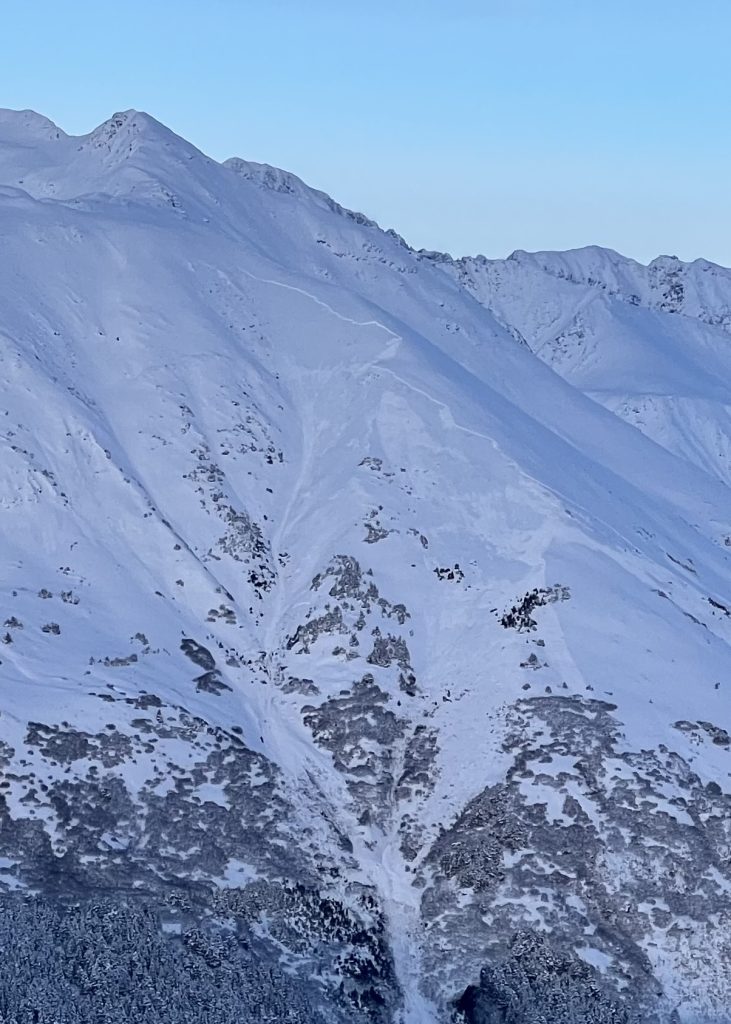 Natural slab avalanche that occurred sometime overnight on Dec 14th (Wednesday night) and seen by several folks. This photo was from H Johnston, taken from the chairlift at Alyeska. 12.15.22. 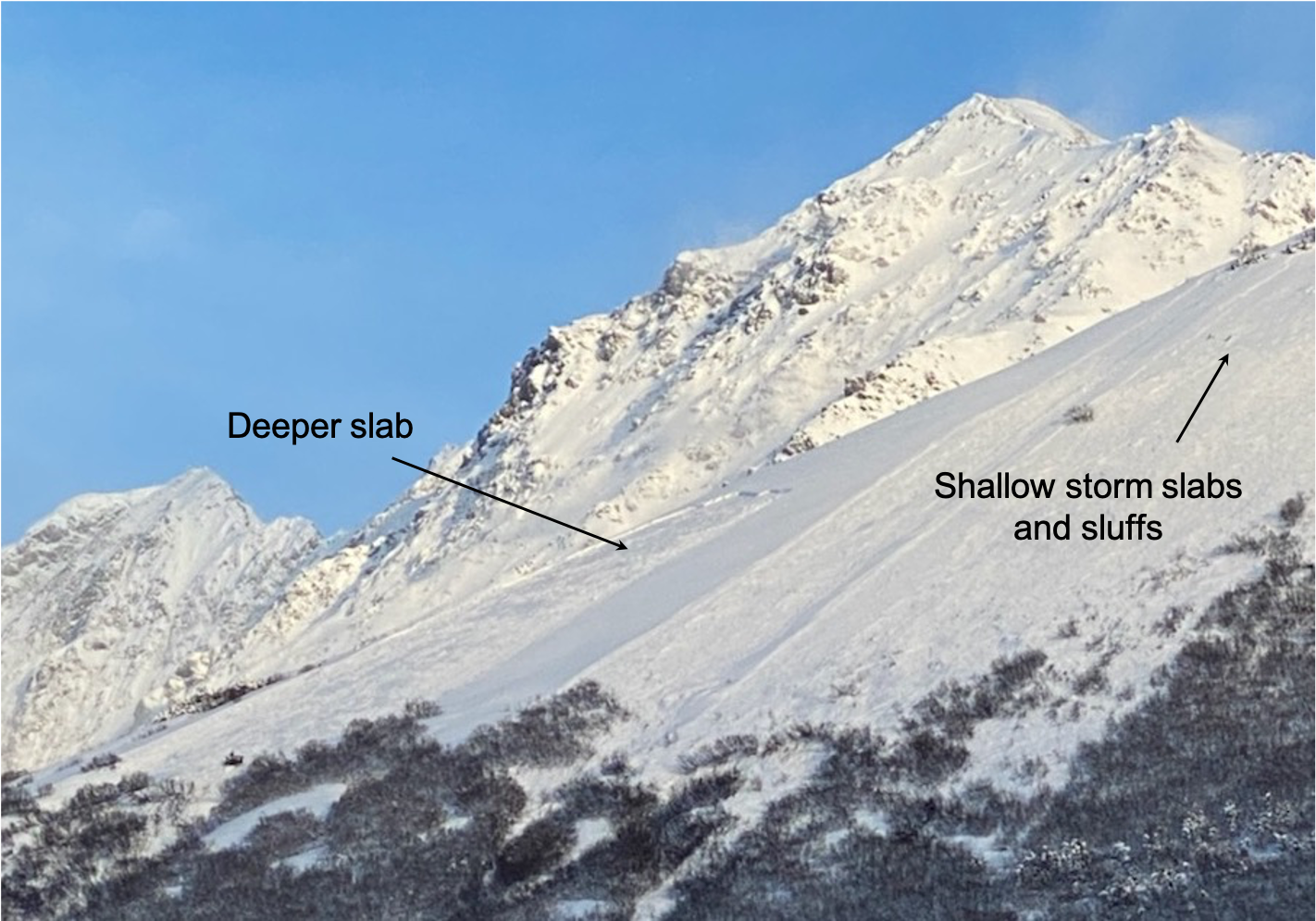 Avalanches up Crow Creek drainage in Girdwood on the southerly face of Goat Mtn. The slab on the left appears deeper, which is suspect for a breaking in a buried weak layer, as opposed to just the storm snow avalanche type seen on the right. Thanks to George Creighton for the photo. 12.15.22. 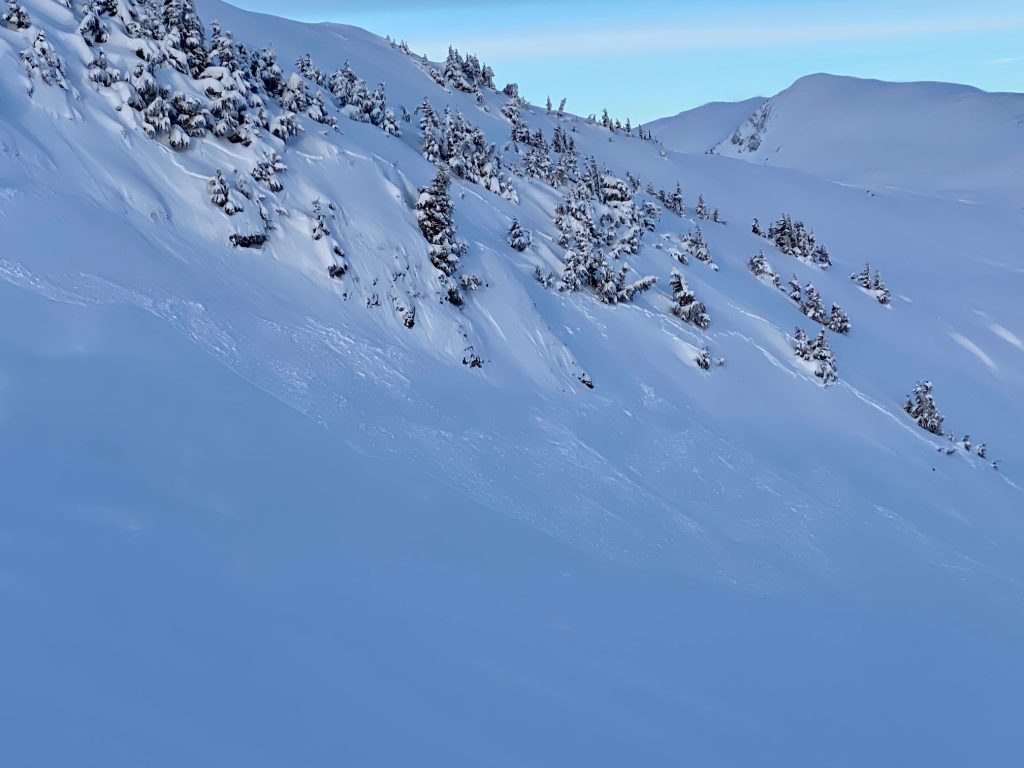 Very shallow, but wide, avalanche in Main Bowl on the backside of Seattle Ridge. Likely released also overnight on Wednesday with 6-8″ of new snow and some wind. 12.15.22. 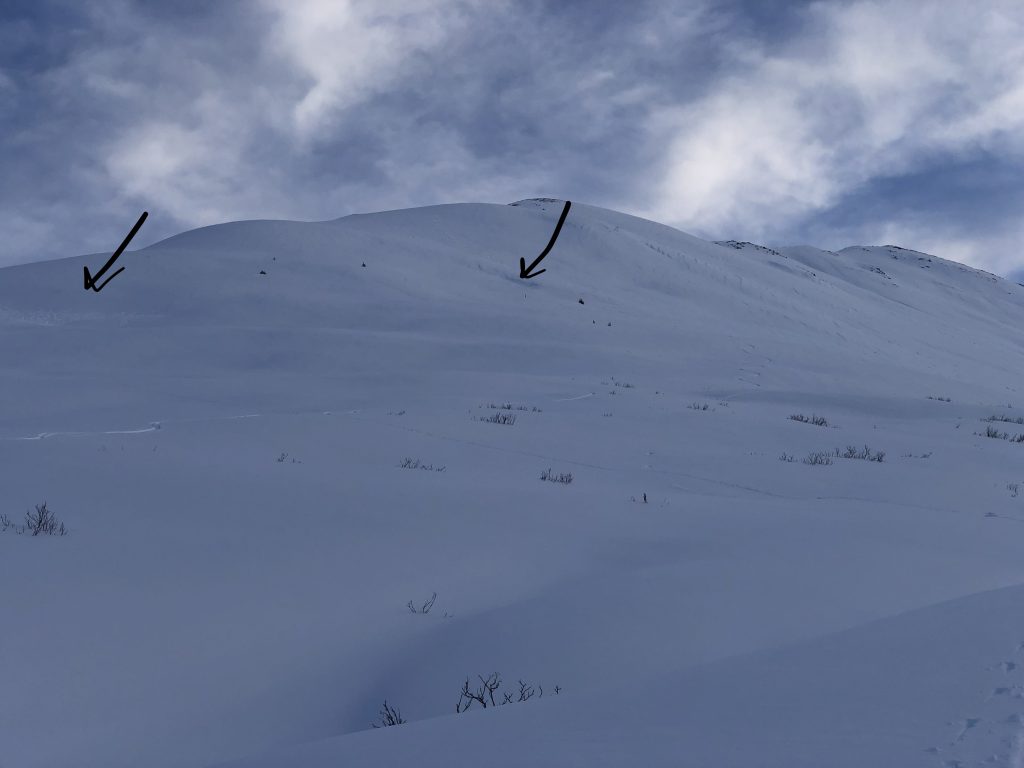 Evidence of 2 older wind slab avalanches on the SW face of Sunburst. These are thought to have occurred several days ago during the storm on Sunday night (12/11). Photo by Sarah Heck on 12.15.22.

Avalanche Problem 1
Wind Slabs
Wind Slab avalanches are the release of a cohesive layer of snow (a slab) formed by the wind. Wind typically transports snow from the upwind sides of terrain features and deposits snow on the downwind side. Wind slabs are often smooth and rounded and sometimes sound hollow, and can range from soft to hard. Wind slabs that form over a persistent weak layer (surface hoar, depth hoar, or near-surface facets) may be termed Persistent Slabs or may develop into Persistent Slabs.
Aspect/Elevation of the Avalanche Problem
Specialists develop a graphic representation of the potential distribution of a particular avalanche problem across the topography. This aspect/elevation rose is used to indicate where the particular avalanche problem is thought to exist on all elevation aspects. Areas where the avalanche problem is thought to exist are colored grey, and it is less likely to be encountered in areas colored white.
Likelihood of Avalanches
Terms such as "unlikely", "likely", and "certain" are used to define the scale, with the chance of triggering or observing avalanches increasing as we move up the scale. For our purposes, "Unlikely" means that few avalanches could be triggered in avalanche terrain and natural avalanches are not expected. "Certain" means that humans will be able to trigger avalanches on many slopes, and natural avalanches are expected.
Size of Avalanches
Avalanche size is defined by the largest potential avalanche, or expected range of sizes related to the problem in question. Assigned size is a qualitative estimate based on the destructive classification system and requires specialists to estimate the harm avalanches may cause to hypothetical objects located in the avalanche track (AAA 2016, CAA 2014). Under this schema, "Small" avalanches are not large enough to bury humans and are relatively harmless unless they carry people over cliffs or through trees or rocks. Moving up the scale, avalanches become "Large" enough to bury, injure, or kill people. "Very Large" avalanches may bury or destroy vehicles or houses, and "Historic" avalanches are massive events capable of altering the landscape.

Around midnight last night the NW outflow winds finally slowed down. For today and into the weekend, it looks as though clear and cold conditions will prevail. The winds should also stay relatively light and variable. That’s good news for the snowpack to start stabilizing.

For today, wind slabs should be the most likely kind of avalanche to trigger. From our field day on Seattle Ridge yesterday, the wind slabs already seemed to be bonding, but this may not be the case for all wind slabs. Slabs could be soft or quite stiff depending on how much wind the area saw. They could also allow a person out onto them before releasing. Watching for wind loaded slopes and any signs of cracking around us will be key. Additionally, having an escape plan in case a wind slab releases and making sure our partners are spotting us will good ways to stack the odds in our favor.

Loose Snow Avalanches:  Sluffs on steeper slopes should be expected within the loose soft surface snow. 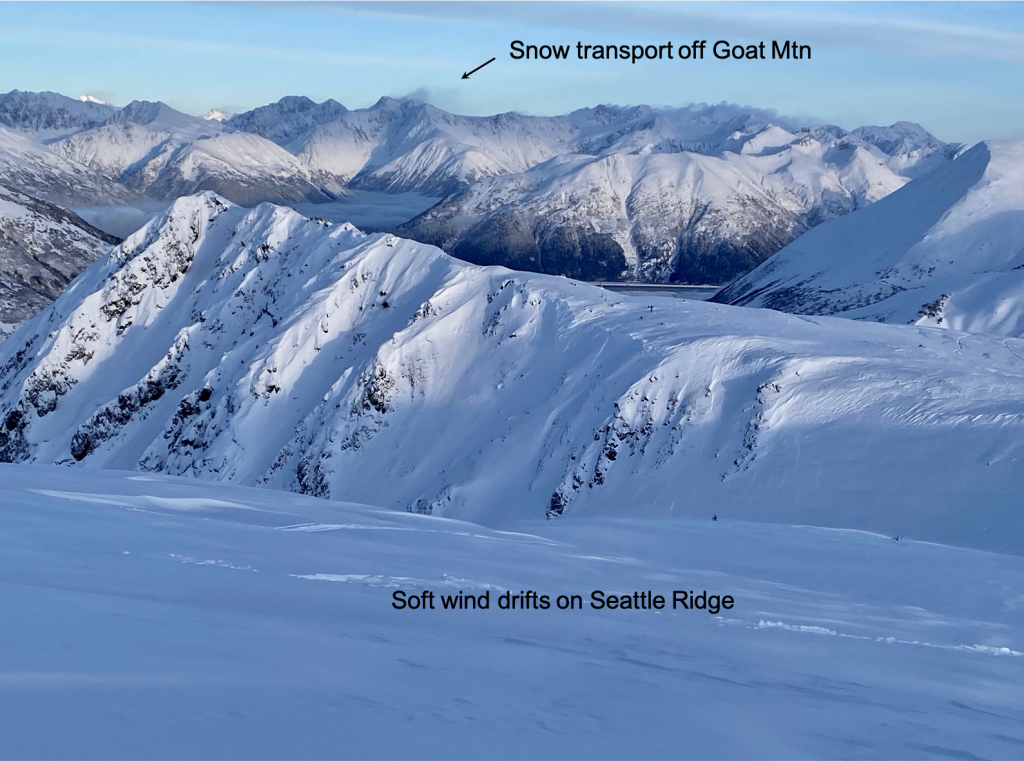 A look at Seattle Ridge yesterday with winds transporting snow in the upper Girdwood area in the background. 12.15.22.

On another note, outside our forecast zone to the south in Summit Lake, we know weak faceted snow exists under the storm snow. Folks traveling in the Summit Lake zone or places the snowpack is much thinner than Turnagain should be on guard for the potential for a slab breaking deeper in the pack. An extra cautious mindset is required for these shallow areas.

Yesterday:  High clouds were over the region with sunshine poking through. Ridgetop winds were NW to west averaging ~10-15mph with gusts in the 40’s+ in favored areas. Temperatures were in 20’s to teens in most locations.

Today:  A mostly clear sky day is on tap with lighter winds. Ridgetops should see averages ~5mph with some gusts in the 20’s in favored locations. Temperatures are cooling off and should be in the teens most areas to even the single digits in some valley bottoms.

Tomorrow:  Mostly sunny skies are expected for the weekend. Ridgetop winds look to be light and variable with temperatures cooling to the single digits at all elevations.