The avalanche danger remains CONSIDERABLE on all aspects above 1,000′. Large dangerous avalanches could again be triggered by people today. There were several slabs triggered yesterday with one resulting in a full burial. Today will be no different. We need to travel in the mountains with a conservative mindset and approach all slopes over 30 degrees with the potential to trigger a large slab capable of burying, injuring or killing a person. These can even be triggered remotely, from the top, side or below a slope.

The danger remains MODERATE below 1,000′ where triggering a smaller avalanche is possible as well as a larger avalanche from above running into this zone.

*A Winter Storm Watch has been issued by the NWS from Girdwood through Seward beginning tomorrow (Sunday evening). Expect increasing avalanche danger with this next round of storms.

Several human triggered slab avalanches occurred again yesterday with one snowmachiner full buried. From what we know, there were three large slabs on the backside of Seattle Ridge (all in Main Bowl), and several other slabs in the Seattle Ridge zone as a whole.

Main Bowl Seattle Ridge, full burial:  A snowmachiner triggered, and was caught with his machine, in a 2-3′ deep slab avalanche on a NE facing slope at 2,500′. The rider was buried under his sled and found and rescued by the two members in his group along with two other riders nearby who assisted. We are very grateful that the rider was found so quickly and unharmed. More details can be seen in the link above. 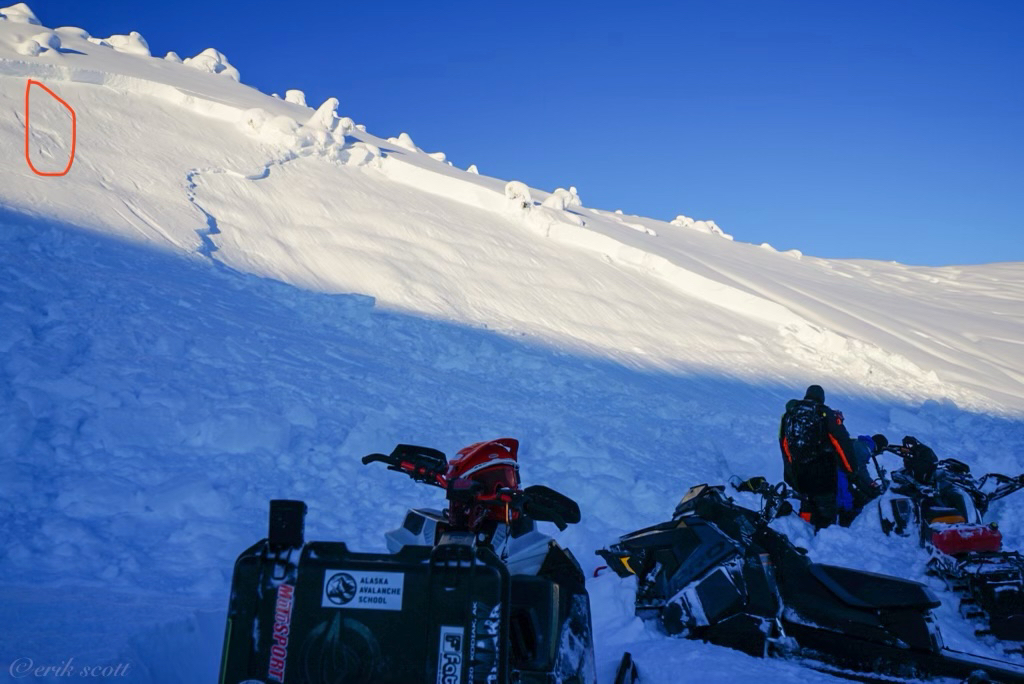 Avalanche that fully buried a rider. Note the red circle marks the spot the rider came off their machine and triggered the slab. Photo from the group nearby who assisted. 12.3.21.

This large slab pictured below was triggered by a rider sidehilling on the slope. The rider was pushed from behind when the slab broke and able to ride off of it staying on their machine. The avalanche was 2-3′ deep on a south facing slope around 2300′ in elevation. 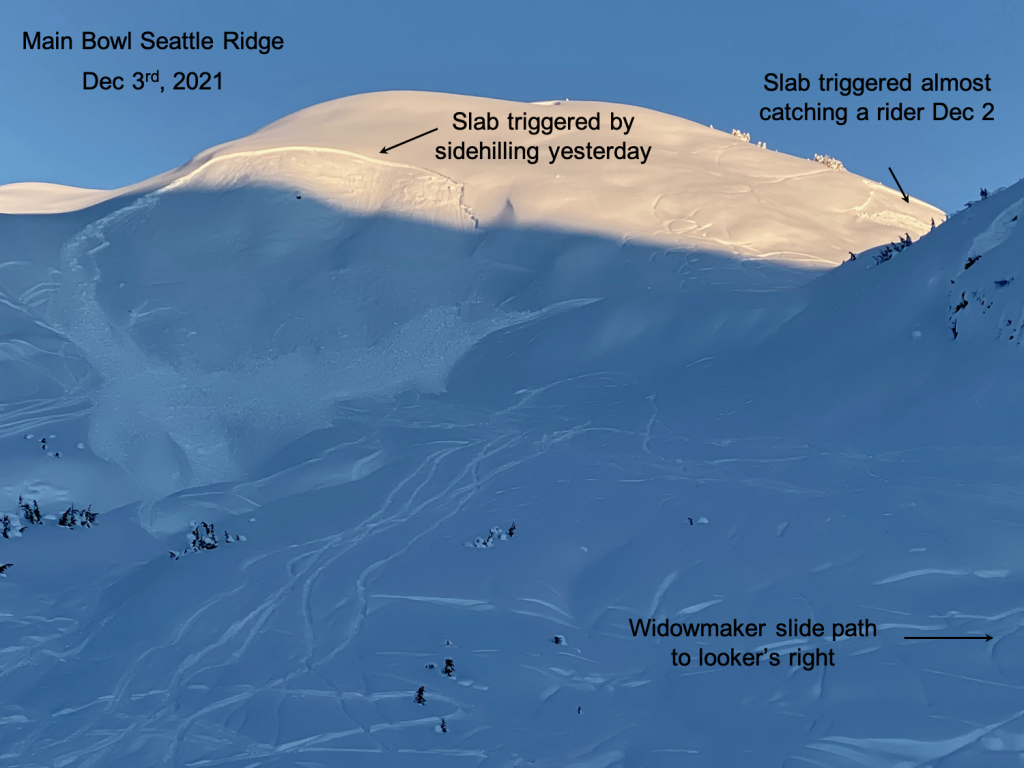 Large slab avalanche rider was able to sidehill away from. Note a small portion of the crown visible in another avalanche from Thursday (the day before) that narrowly missed catching a rider. 12.3.21.

The third large slab is shown in the video with Andrew below (~2′ deep, north facing slope at 2,000′). This video was taken only a few minutes before the slab on the other side of Main Bowl was triggered by the rider sidehilling.

Some examples of the other slabs triggered by riders can seen in this photo below taken from a group across the valley on Eddies Ridge. 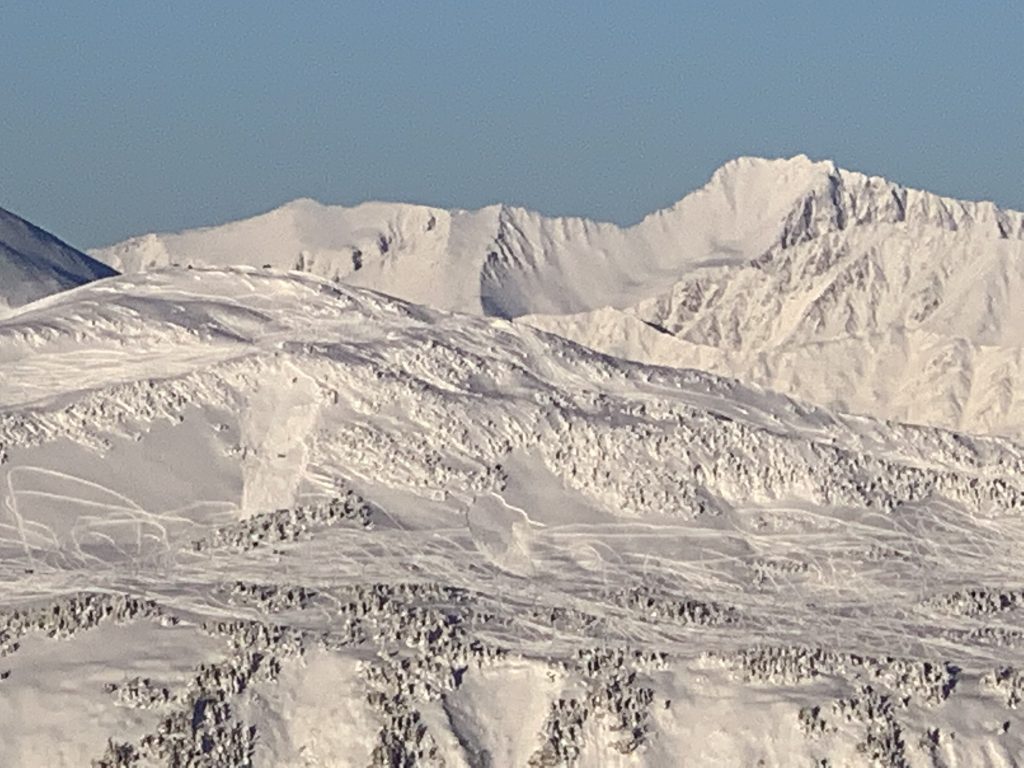 Two snowmachine triggered slabs below the weather station on the road (SE) side of Seattle Ridge. Photo: Chris Flowers, 12.3.21.

There are more details regarding the Magnum avalanche on Thursday, Dec 2nd that caught a skier. Some confusion was had as to who shot this video below – that has been answered – thank you to Mark Norquist for sharing his video and the specific events of the day.

There is no doubt the mountains are dangerous right now, despite the sunny skies. Our best bet is let the slopes rest, get hit by this next storm coming in tomorrow, and hopefully they can begin to heal moving forward. But for now, managing our terrain and sticking to the lower slope angles (around 30 degrees or less) is a super way to still enjoy the great snow conditions and get back to the parking lot safely.

The whole problem with the snowpack lies in those weak layers of buried surface hoar and facets that sit about 2-3′ below the surface. Those weak layers have been loaded by three storm events now. They were capable of producing avalanches as soon as they were buried, but after this last snow event, those avalanches have become larger as the slab on top grew. They also have become a bit harder to trigger, because the weak layers are further down. There have been many tracks laid on steep slopes with no resulting avalanche. This can really give us a false sense of security. There have been slabs, including most of them yesterday, that were not triggered till the 4th or 10th rider hit the slope. It is a really difficult problem when the snow is so good for skiing/riding and there are tracks on a slope to help lure us.

We also can’t forget the #1 Red Flag – Recent Avalanches. Those signs of cracking in the snow and collapsing (whumpfing) are becoming less, but the recent avalanche part is not. So, if you don’t hear a whumpf or see a shooting crack, remember we’ve seen many recent avalanches. Additionally, snow pit test are becoming unreliable as well. There have been cases where the pit tests showed the weak layer, but the slab on top didn’t want to react; only to have a skier trigger the slope next to it an hour later. This all adds to the message of ‘it’s just a good idea to keep our terrain mellow’.

This photo below of an avalanche crown was taken by the group that triggered the very large slab on Eddies two days ago. The crown face is just over 3′ deep and the weak layer was buried surface hoar on facets. This group had no signs of instability warning them the slope was unstable until the avalanche was triggered. 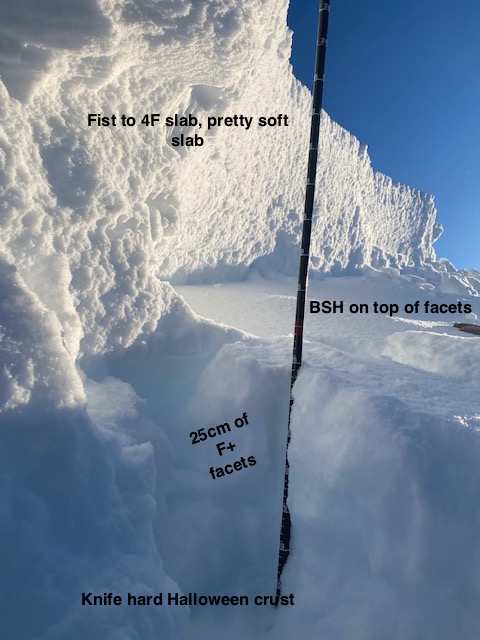 We continue to monitor glide activity in the area. It looks like the glide avalanches have slowed down for now, but there are a lot of glide cracks around. Avoid spending time under these features since the can release unpredictably, and are very large and destructive when they do.

Yesterday:  Clear skies, some valley fog along in places, with light variable winds. Temperatures were in the single digits in valley bottoms and a bit warmer, in the teens, along ridgelines.

Today:  One more clear and cold day with light variable wind is forecast before weather moves in tomorrow. Valley bottoms are near 0F while ridgetops are a bit warmer, near 10F.

Tomorrow:  The next system to impact our region should move in tomorrow morning with cloudy skies, warming temperatures and ridgetop winds bumping up to 20-40mph from the east. Snowfall is expected to begin falling later in the day with uncertainty as to the amount and strength of the storm. There is chance we could see a rain/snow mix with this event at sea level. Either way, it’s looking like another round of precip is headed our way. Stay tuned!