The avalanche danger is MODERATE above 1000’. Triggering a slab avalanche 1-2′ deep is possible on wind-loaded slopes. Light to moderate winds over the past few days have been able to drift the snow at the surface into sensitive slabs on top of fragile weak layers that formed last week.  Today it will be important to recognize and avoid wind-loaded terrain. Give cornices a wide berth, limit time spent under glide cracks and watch your sluff.

PLACER/PORTAGE VALLEY/WHITTIER: This area received 12-18″ snow with the most recent storm, and has seen more wind in the past few days. Larger avalanches are possible in wind-loaded terrain, and extra caution is advised.

SNUG/LOST LAKE/SEWARD: More snow has fallen in the mountains near Seward and the NW winds have been stronger in this zone. These winds are forecast to continue today. Large avalanches may be triggered by a person on skis or snowmachine. Be extra cautious and pay attention to changing conditions.

There was a skier triggered slab avalanche in the Library yesterday. The skier was able to arrest on the bed surface and was not carried. The slab was about a foot deep and released on the layer of buried surface hoar we have been talking about. This was second line of the day for the party involved and last skier in the group. The group noted the first line skied had no obvious signs of instability. Thanks to the party involved for sharing information and photos. 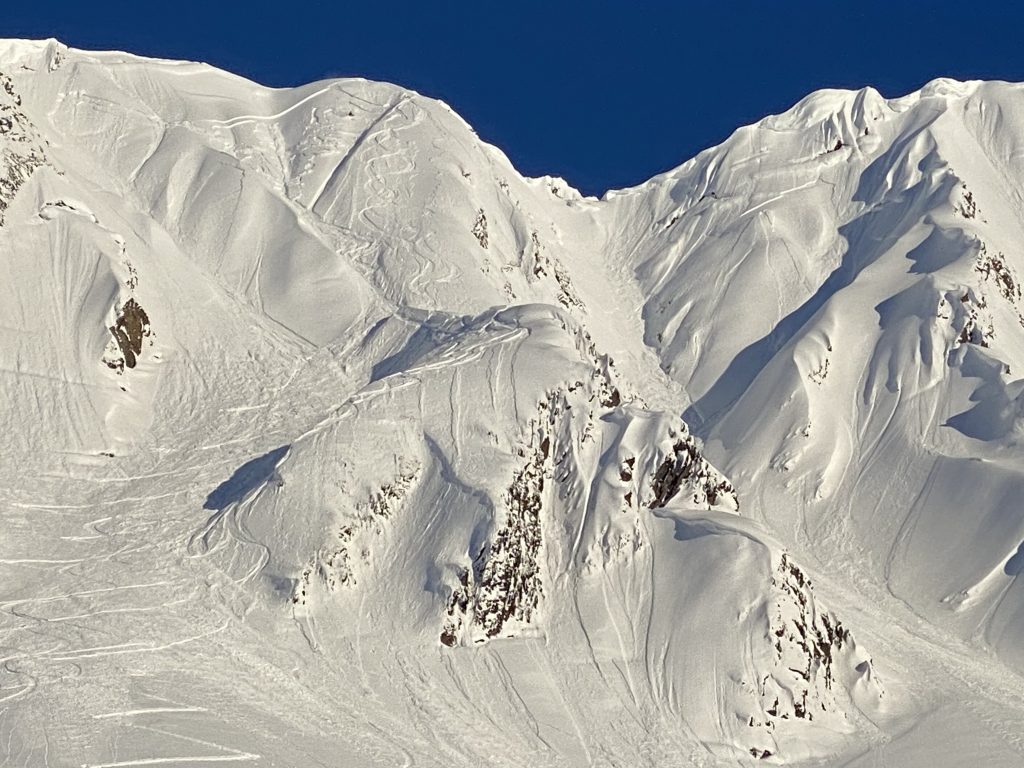 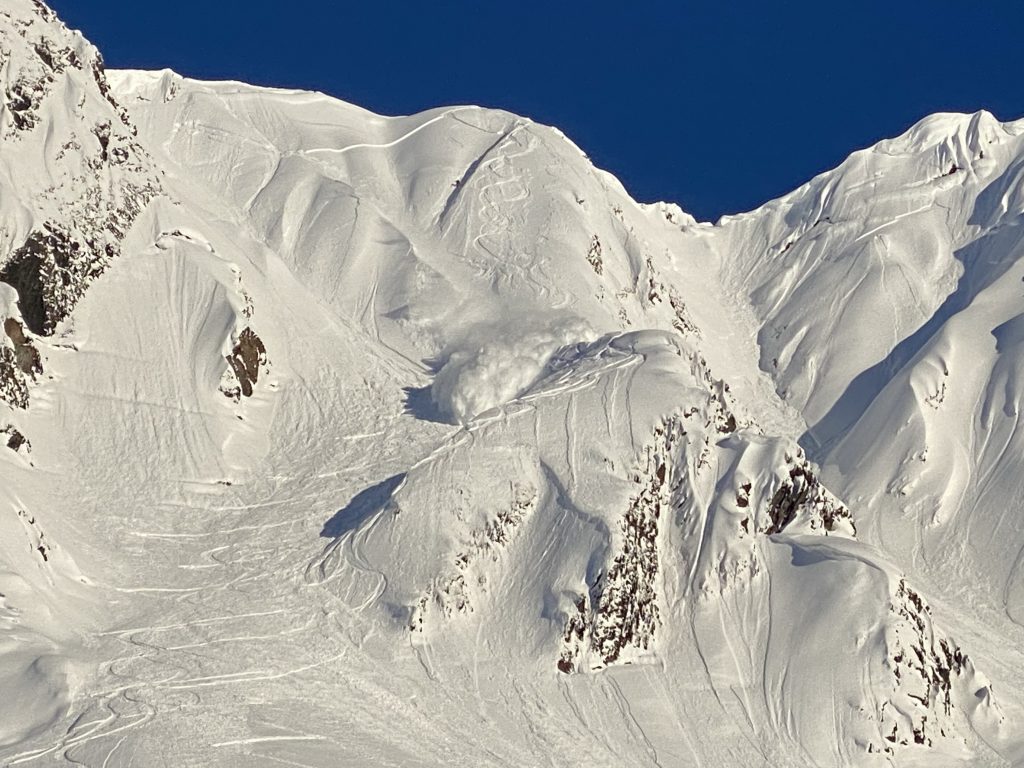 Avalanche in motion with skier arrested on the bed surface off to the looker’s right spine, 1.31.21. Photo: Ben Reynolds. 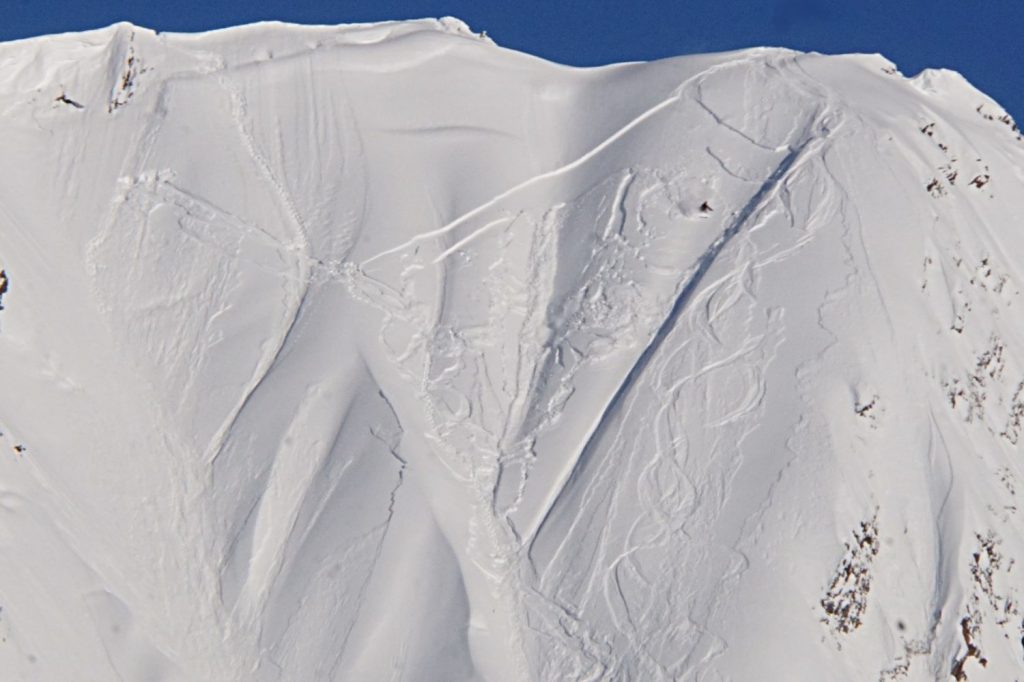 Many people were out enjoying the sunshine and soft snow over the weekend. Today will be another beautiful, chilly day to be out. However, avalanche conditions are a bit tricky right now and there are a few things to take into consideration. First and foremost, triggering a slab avalanche is possible. Second, pay attention to wind-loading. There is plenty of soft snow available for transport. Winds are blowing from the northwest, these get channeled through the southern end of Turnagain Pass from the south and were strong enough to move snow yesterday. Today will be the second day of this wind pattern. Prior to yesterday winds were from the east. Slopes that have seen even just a touch of wind over the past few days may have developed a slab over the weak snow that is unfortunately lurking below. Which brings me to the third thing to remember when choosing terrain today; there is a weak layer of surface hoar and near surface facets underneath the most recent storm snow. People have been triggering avalanches that have been releasing on this layer for the past three days in terrain with a little bit of wind effect. The question of today will be whether or not a slab has formed on the slopes you want to ride. If you are headed out today watch for:

For people getting into big terrain, soft wind slabs may be found not only along ridgelines but lower on the slope. Even a small slab triggered could entrain a large amount of snow if the slope is steep and sustained and take you for a bad ride.

Loose snow avalanches (sluffs): Sluffs are likely to be high volume and fast running. They could entrain not only all the new snow, but a portion of the facets that sit below it and could have serious consequences if they carry you into terrain traps like cliffs, trees, or rocks.

Cornices: We have recently seen large cornices peeling away from ridgelines, opening up large cracks (there are some good photos here). Be sure to give them plenty of space, and minimize the amount of time you spend below them. 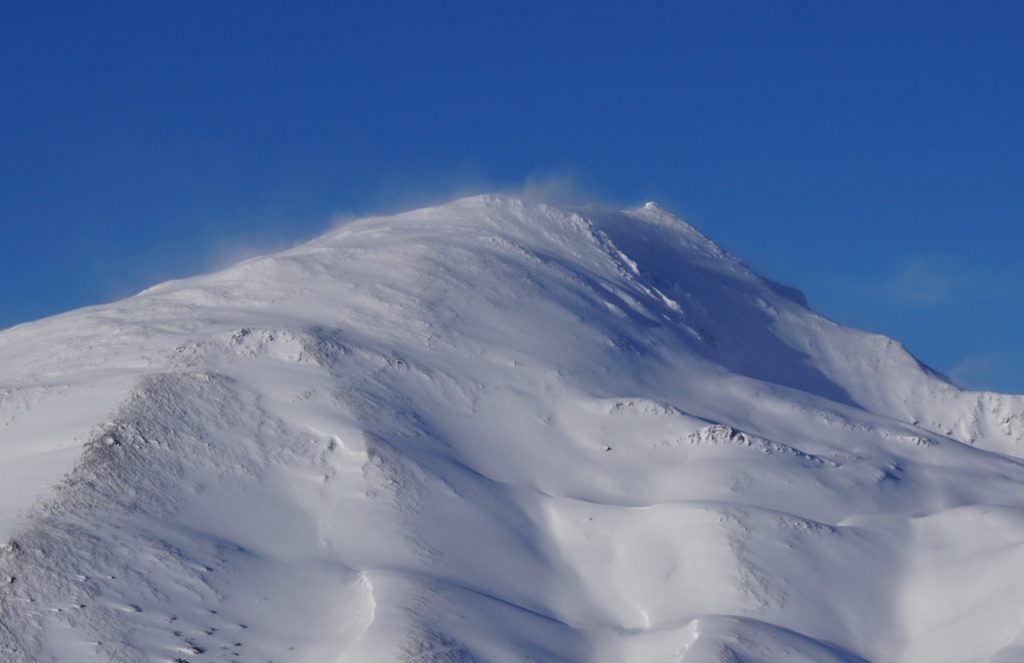 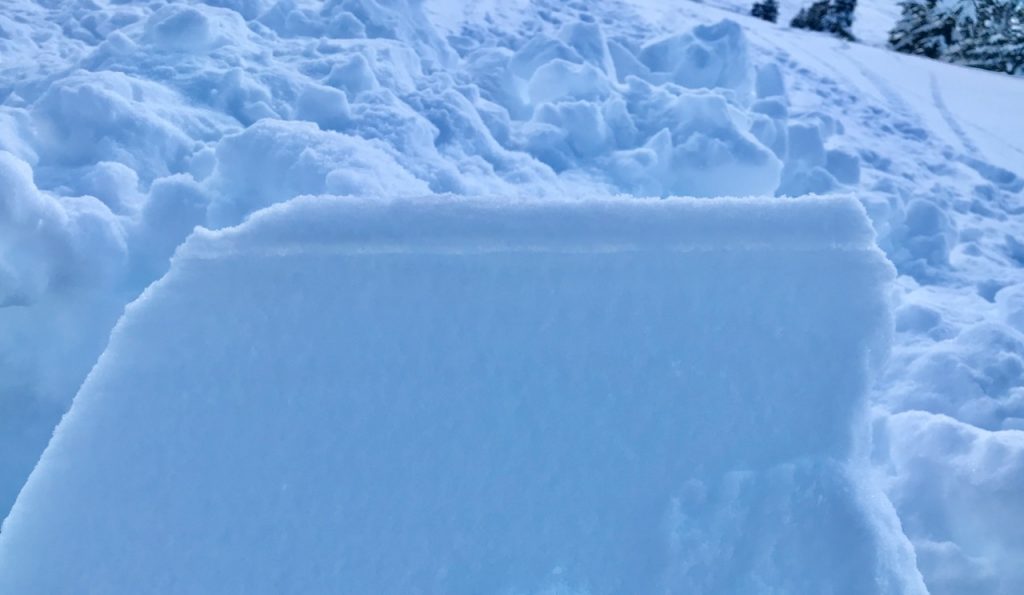 The thin line of buried surface hoar was easy to spot in a pit on Petes North yesterday at 2200′. There wasn’t much new snow on top of it in this area but wind-loaded slopes or areas that received more snow could have sensitive slabs. 1.31.21.

Yesterday: Skies were mostly clear with some valley fog along Turnagain Arm and into Girdwood. Temperatures were in the single digits to low teens. Winds were northwesterly 5-15 mph gusting into the 20s. Overnight skies were mostly clear, temperatures dropped to the low single digits or below 0°F in some locations, winds remained northwesterly 5-15 mph gusting into the 20s.

Today: Another day of clear skies and northwest winds 5-15 mph with gust into the 20s. Temperatures will be in the low single digits to below 0°F. Skies remain clear overnight and temperatures will slowly rise. NW winds continue until early Tuesday morning when they shift to the east.

Tomorrow: Skies will be sunny in the morning with increasing clouds in the afternoon. Temperatures will be in the mid teens and winds will be light and easterly.