The avalanche danger will be MODERATE above 1000’, where it will be possible to trigger a wind slab avalanche up to a foot deep. Light winds have been able to drift the 8-10” of low-density snow at the surface into sensitive slabs on top of fragile weak layers that formed earlier in the week. These sensitive wind slabs exist on some, but not all, slopes. Today it will be important to recognize and avoid wind-loaded terrain.

The avalanche danger will be LOW below 1000’, where less soft snow at the surface and a virtual lack of wind will make avalanches unlikely.

PLACER/PORTAGE VALLEY/WHITTIER: This area received 12-18″ snow with the most recent storm, and has seen more wind in the past few days. This will make larger avalanches possible, and extra caution is advised.

LOST LAKE/SNUG/SEWARD: These areas also received more snow than the Turnagain/Girdwood/Summit areas. With 20-30 mph winds expected today, avalanche conditions may be more dangerous here than in our core advisory area. Cautious route finding will be essential in these zones.

We received multiple reports of skier and snowboarder-triggered storm and wind slab avalanches yesterday. Most of these were not big enough to bury a person, but they did grab our attention. Nobody was caught or carried in any of these avalanches.

In the past two days, we have gotten reports of several human-triggered avalanches failing on the interface between the most recent storm snow and a weak layer of buried surface hoar and near-surface facets. Most, if not all, of these avalanches have occurred on slopes that had seen recent wind loading. Similar activity will be the main concern for today. We are not expecting to see any extraordinary winds during the day, but it will not take much to move the low-density snow on the surface into sensitive slabs. If your travel plans for the day involve any kind of steep terrain, it will be important to pay attention to changing conditions at the snow surface. Even a subtle increase in surface hardness could be enough to make a dangerous combination of a slab on top of very weak snow. Be on the lookout for red flags indicating increasing instability, such as shooting cracks and fresh avalanche activity. The most likely places to find unstable snow today will be near ridgelines, below convexities, or on cross-loaded slopes. With winds forecast out of the west, we might see slabs forming in unusual places today.

Sluffs: The low-density snow at the surface has been producing sluffs in steep terrain. These avalanches are not big enough to bury a person, but they could have serious consequences if they carry you into terrain traps like cliffs, trees, or rocks. If you plan on heading into steep terrain, be aware of these dry loose avalanches, and of exposure to consequential terrain below.

Cornices: We have recently seen large cornices peeling away from ridgelines, opening up large cracks (there are some good photos here). Be sure to give them plenty of space, and minimize the amount of time you spend below them. 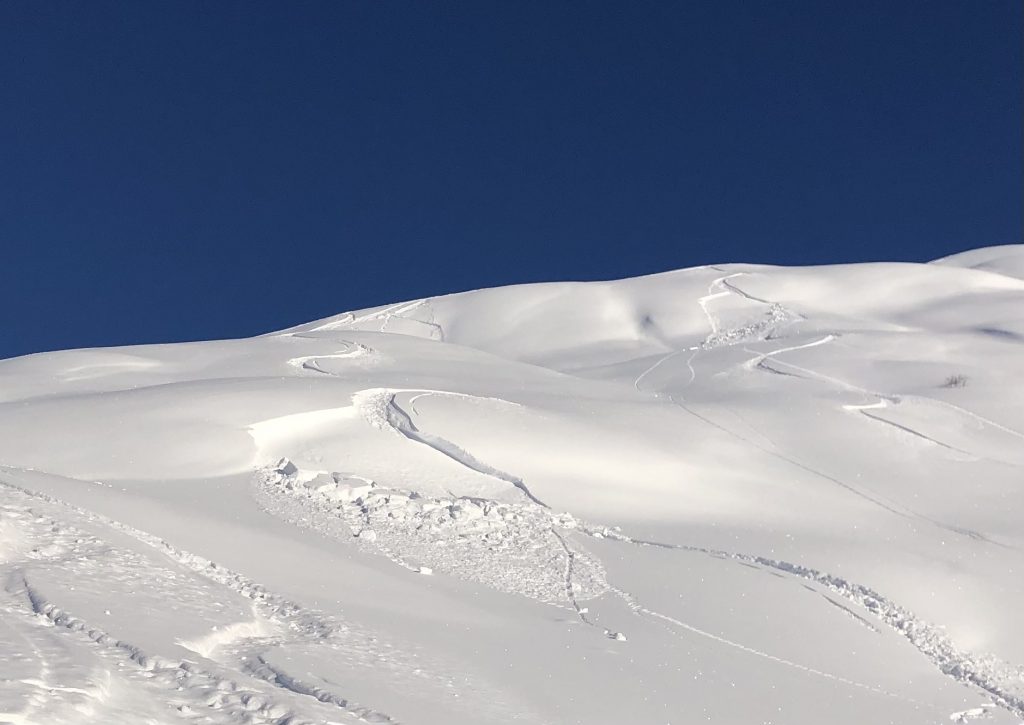 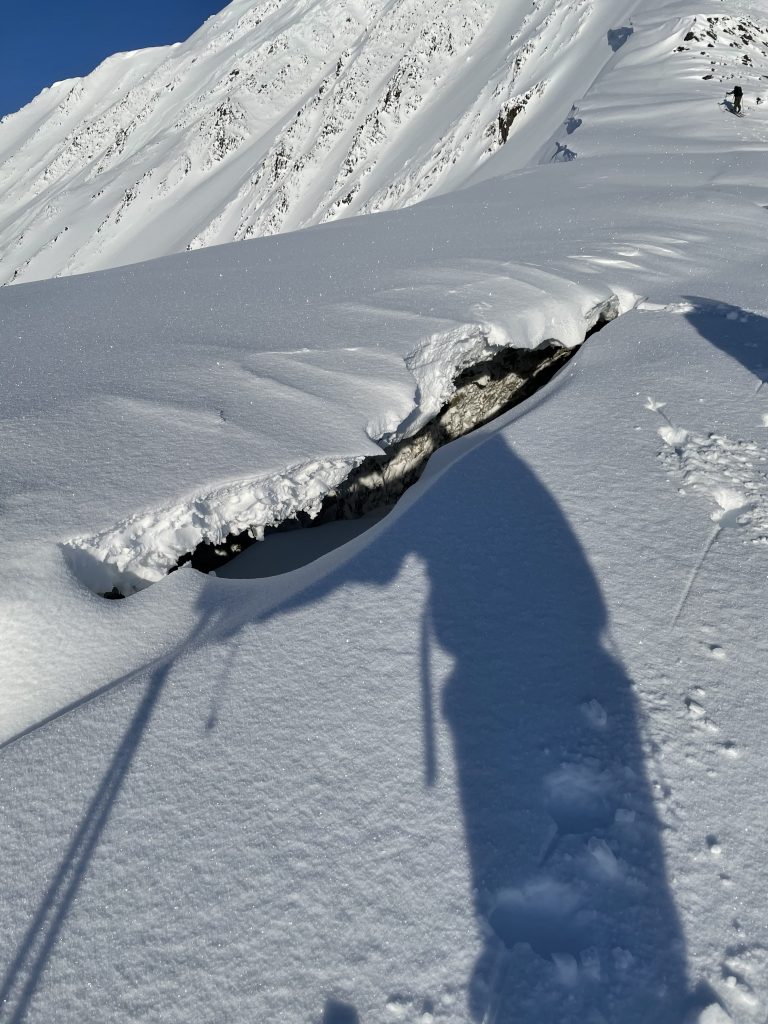 Cornices are starting to peel away from ridgelines, opening up large cracks. These cracks can sometimes be difficult to identify when they get bridged with blowing snow. Bertha Creek Headwall. Photo: Tony Naciuk. 01.30.2021

We have been seeing more glide cracks open up recently. Glide avalanches are large and destructive, and their timing is impossible to predict. Avoid traveling on or below slopes with glide cracks, and let us know if you see any new ones open up.

Yesterday: Winds were calm to light, blowing 0-10 mph at ridgetops. High temperatures were in the upper teens to low 20’s F, with lows in the single digits to low teens F overnight. We saw plenty of sunshine and no precipitation under clear skies.

Today: Similar weather continues today, as an upper-level ridge of high pressure stays in the area. We expect to see temperatures reach the low to mid teens F, with light winds 5-10 mph out of the northwest. We should see another sunny day, with no precipitation expected.

Tomorrow: Lows will drop down into the single digits tonight, and stay around 10 F tomorrow. Light westerly winds will continue, with another day of clear skies expected. No precipitation is expected tomorrow.