The avalanche danger is MODERATE today above 1000’. It will be possible to trigger an avalanche on a layer of weak snow buried 1-2’ deep. While this weak layer may be found on most slopes in the area, the key factor determining stability will be whether there is a slab of stiffer snow at the surface. Avoid traveling on slopes that have seen wind loading since last Friday, and pay attention to other indicators of instability like shooting cracks, collapsing, and other avalanches.

PLACER/PORTAGE VALLEY/WHITTIER: These areas received 12-18″ snow during last week’s storm, and have seen stronger winds since. This will make larger avalanches possible.

SUMMIT LAKE: This area has seen more wind, and as a result it is more likely to find slopes with a cohesive slab of snow sitting on top of the buried weak layer. Observers saw natural wind slab activity yesterday near Fresno Ridge.

SEWARD/SNUG: Winds are expected to be stronger near Seward today. It will be important to pay attention to continuing loading through the day today, in addition to the persistent slab problems linked to older wind slabs from the past few days.

Forecaster Chat #4: Snowmachine Specific- Head on a Swivel! Join us Tonight from 7-8:30pm, for a VIRTUAL snowmachine-specific discussion with Graham Predeger and snowmachine educator and rider Tim Thomas from Haines. Details and free registration HERE.

Summit Lake: Skiers reported a natural avalanche failing near the surface on a wind-loaded slope in the Colorado/Fresno area.

Last week’s snowfall buried a layer of surface hoar and near-surface facets that has been producing avalanches on wind-loaded slopes for the past few days. We are expecting the winds to calm down today, but unfortunately the avalanche danger will not do the same. The nature of these persistent weak layers is that they are capable of producing avalanches long after any kind of loading event. For today, the best way to stay out of trouble will be by identifying and avoiding any steep slopes with stiff snow at the surface. After several days of cold and clear weather, most slopes have 6-8” loose, unconsolidated snow at the surface unless they have seen any wind-loading since Friday. These slopes with loose snow at the surface are not capable of producing persistent slab avalanches because they are lacking a cohesive slab capable of propagating a fracture. The danger will lie on the slopes that have seen wind loading since Friday, which has built a dangerous structure with a relatively stiff slab of snow at the surface sitting on top of a layer of relatively weak snow buried 1-2′ deep.

Because we are dealing with a persistent weak layer, slopes that have seen wind loading will not gain strength as quickly as they normally would. In addition to monitoring surface conditions, be on the lookout for other key indicators of instability- shooting cracks, collapsing, and fresh avalanche activity.

Loose Snow Avalanches (Sluffs): Several days of cold and clear weather has kept the surface snow dry and loose in areas that have been sheltered from the wind. Be aware of fast-moving and high-volume sluffs in steep terrain, especially if you are traveling near terrain traps like cliffs, rocks, trees, or gullies.

Cornices: Large cornices are starting to peel away from ridgelines, opening up large cracks and becoming especially sensitive to human triggers. If you are traveling along ridgelines be sure to give them plenty of space, and minimize the amount of time you spend traveling below them. 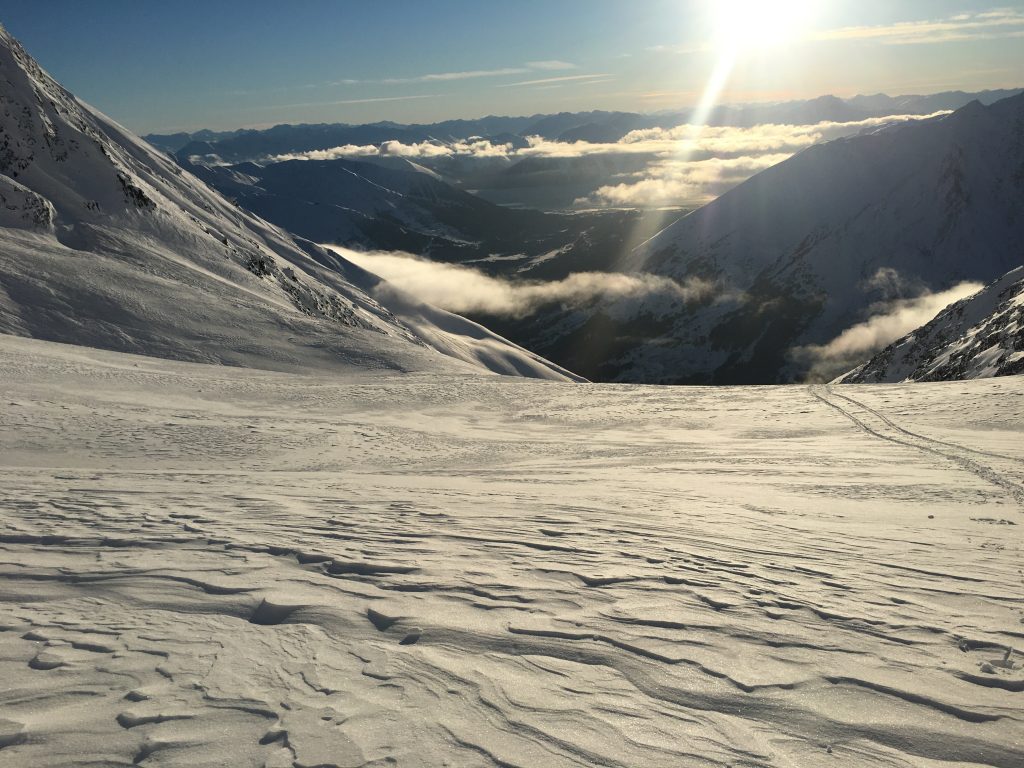 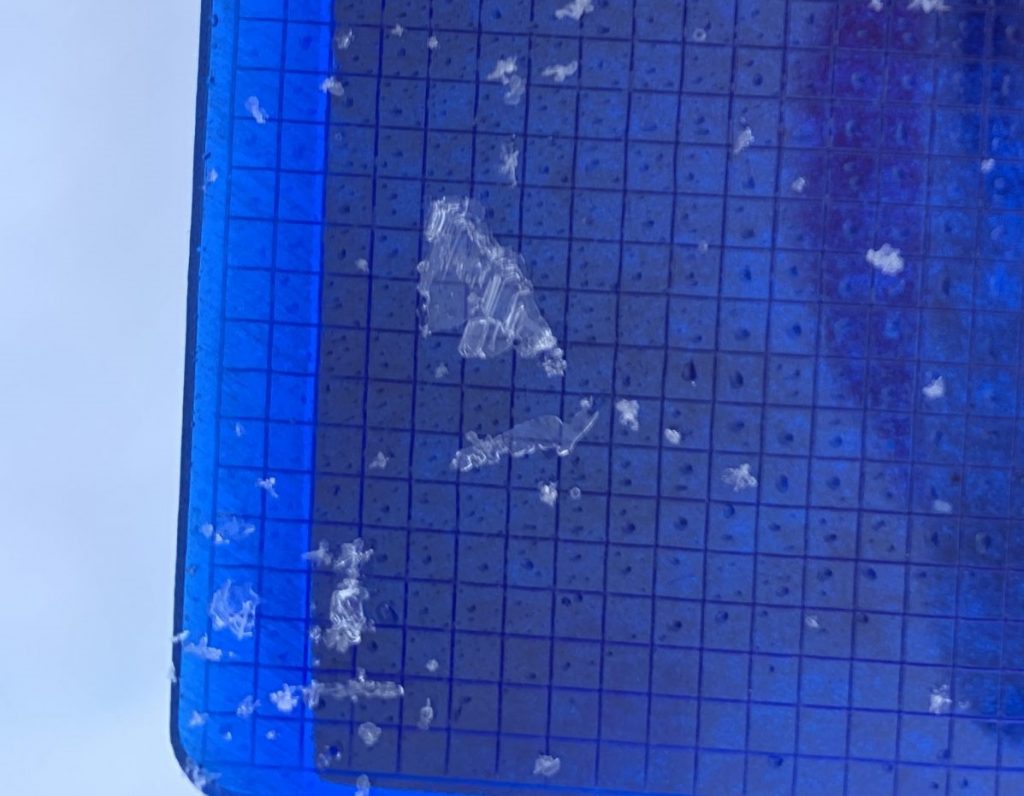 This surface hoar was the culprit in a skier-triggered avalanche on Eddie’s late last week, and will continue to be cause for concern today. Photo: Nick D’Alessio. 01.29.2021

Glide cracks continue to open up throughout the area. These avalanches are unpredictable and large– they involve the entire season’s snowpack. Avoid spending any time on or below slopes with glide cracks, as they can release unexpectedly. If you see any new glide activity, please let us know here.

Yesterday: We saw another day of clear skies and cold temperatures, with highs in the single digits to low teens F. Low temperatures were near or slightly below 0 in Girdwood and Turnagain Pass, and down to -14 F in the Summit Lake area. Light winds were blowing 5-15 mph at the ridgetops from variable directions.

Today: Cloud cover is expected to increase through the day today as the upper-level ridge moves out of our area. Temperatures will reach the mid- to upper teens F today, and drop down to the single digits to low teens tonight. Winds are expected to remain calm to light, blowing 0-10 mph out of the east at ridgetops.

Tomorrow: Skies will clear through the day tomorrow, with highs expected in the mid- to upper teens F. Winds are expected to remain light, at 0-5 mph out of the east at ridgetops. We could see a trace of snow overnight.