The avalanche danger remains  HIGH in the backcountry. Very large avalanches occurred naturally yesterday and are expected to keep releasing today. Ten days of stormy weather has been loading slopes with 8 to 15 feet of snow, which is peeling off the mountains. These slides are big and have been sending debris far into runout zones and through flat areas.  Travel in avalanche terrain is not recommended. Give runout zones an extra wide berth as debris may run much further than expected.

PORTAGE VALLEY:   Large natural avalanches may send debris all the way to valley floors today, despite a break in weather. Travel in runout zones from avalanches that may occur above is NOT recommended. This includes venturing along and past the Byron Glacier Trail.

SUMMIT LAKE (& INTERIOR EASTERN KENAI MTS):    Large to very large human triggered avalanches remain very likely. Between 2-3 feet of snow has fallen onto a very weak snowpack and avalanche are releasing in old buried weak layers.  Travel in avalanche terrain is not recommended in these zones.

SEWARD/LOST LAKE:    Large and dangerous natural avalanches  have been observed in this area. Continued rain, wind, snow and even sunshine and warm temperatures is keeping the avalanche danger elevated. Travel in avalanche terrain is not recommended.

Large to very large natural avalanches are occurring across the mountains while the parade of wet March storms roll through. Yesterday seemed to be a tipping point for a natural avalanche cycle. Evidence of many avalanches were seen during a short window of ‘marginal’ visibility. Magnum’s West face slid through low angle terrain piling debris across the entire base of the face all the way to the power line, this is a notable situation as low angle slopes under larger terrain can be unsafe right now. Crowns and debris were also seen in many paths in the 20-mile drainage, Portage and Placer Valleys, Seattle Ridge, Eddies, Sunburst, Pete’s South and Johnson Pass.

Too much snow, too fast with warming temperatures, along with rain on snow, is all contributing to this avalanche problem. After the 2 week dry spell, ending March 7th, the mountains around Portage and Girdwood have seen 10-15 feet of snow since March 8th at the high elevations, between 6-8 feet around Turnagain Pass and 2-4 feet in the interior Kenai. Avalanche paths that have not slid could release large amounts of debris as we saw yesterday. If you are planning to head into the backcountry, keep it safe and give runout zones a VERY wide margin. The Magnum avalanche is a good example of how someone could accidentally be in the wrong place at the wrong time. It’s not the time to be anywhere near or under slopes over 30 degrees.

Although the peak of the storm is moving out, increased warming today, whether it be additional rain on snow or sunshine that pokes through the clouds, will keep natural avalanches likely. Wet slab and wet loose avalanches are expected below 2,500′ with the potential for dry snow avalanches above. Check out the graphic below for how warm temperatures are expected this afternoon. 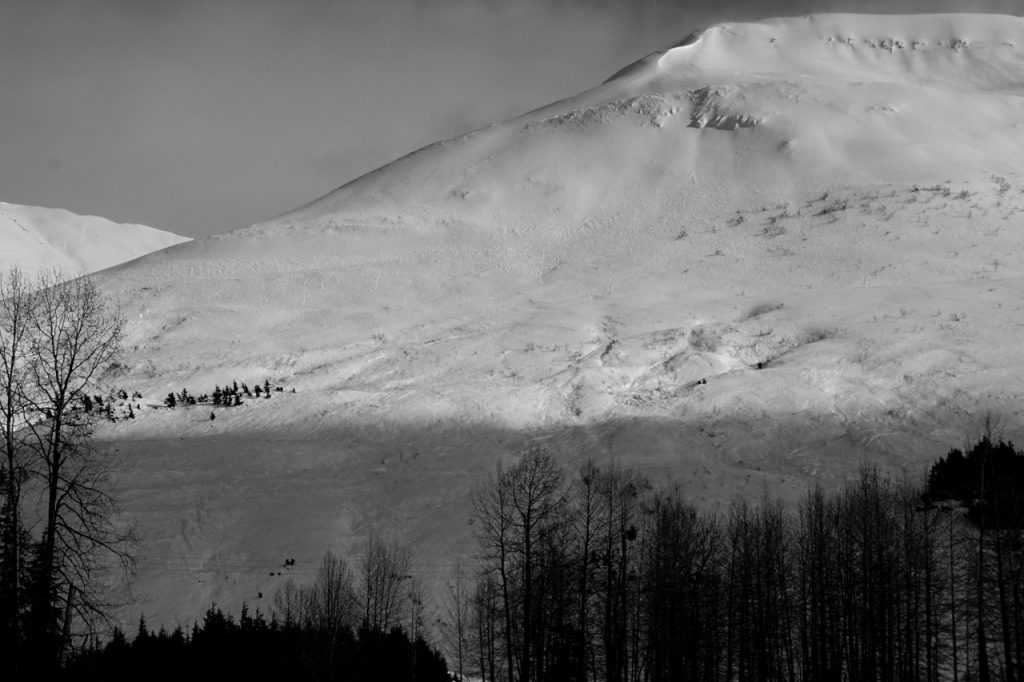 Magnum’s West Face is littered with debris. Debris is covering the low angel terrain all the way to the powerline. This path does not often run this far. 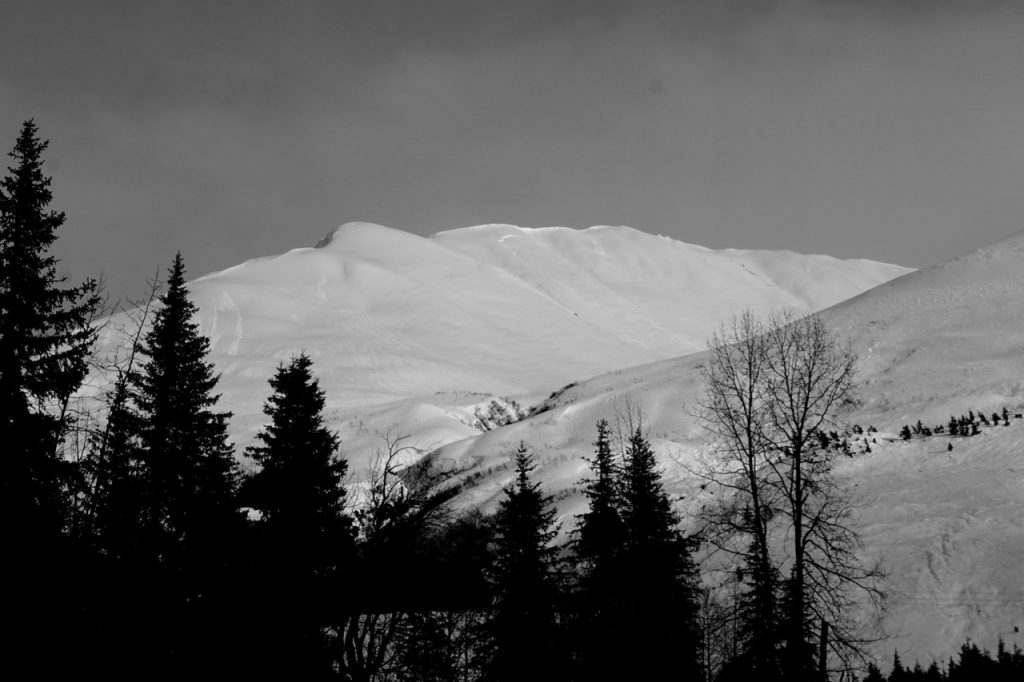 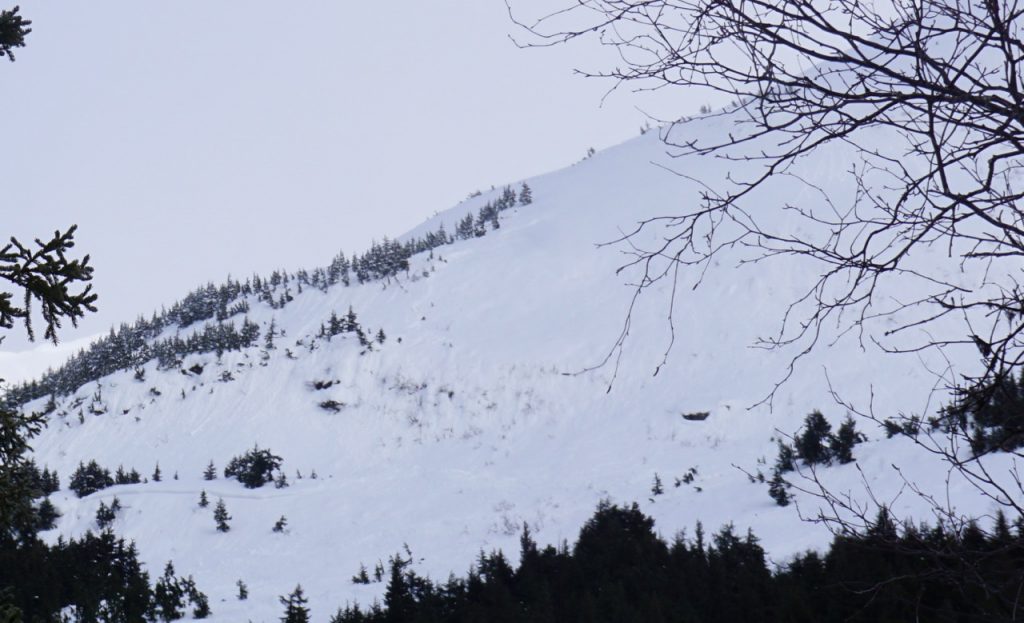 Natural slab avalanches on the SW facing of Pete’s South face. The looker’s right side of this path can, and possibly did, threaten the Johnson Pass trail. 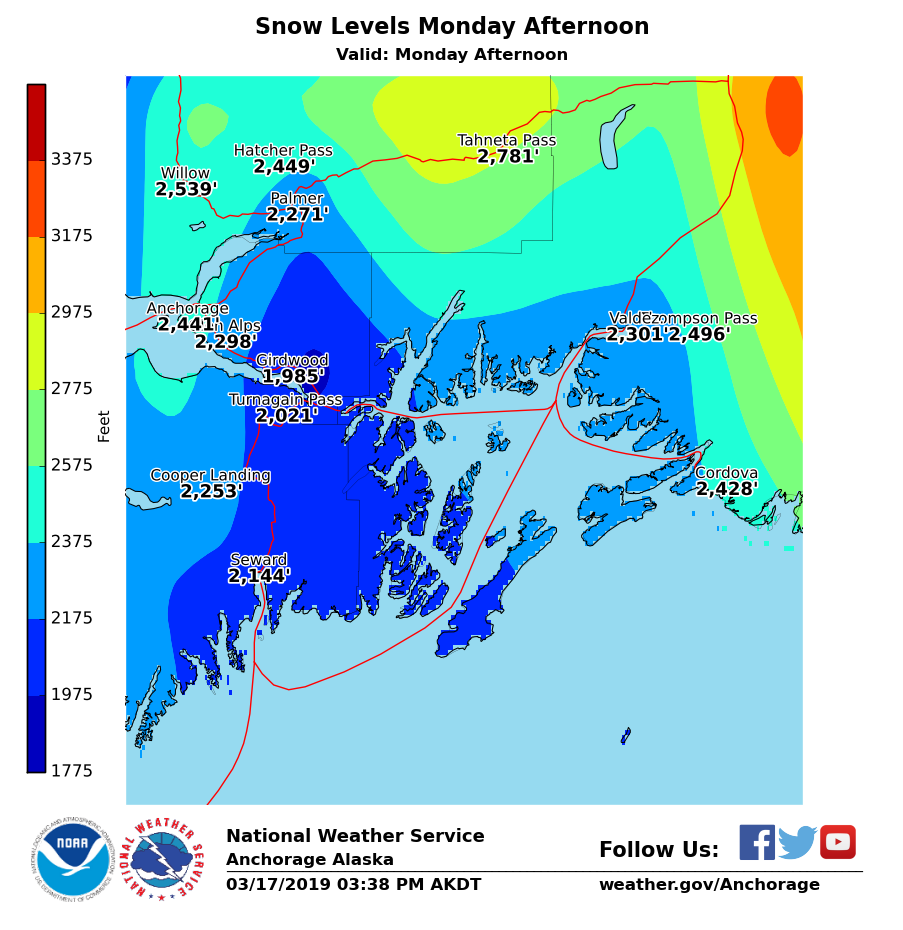 Yesterday:   Mostly obscured skies, strong winds, rain and snow were over the region. Between 0.5 – 1.5″ of rain fell over the past 24-hours up to 2,000′ at times, favoring Girdwood and Portage (equating to 5 to 15″ or so of snow at the higher elevations). Ridgetop easterly winds again blew 40-60mph on average and gusted close to 100mph at the Sunburst weather station. Temperatures reached 32F at 2,500′ and the low 40’sF at sea level before dropping only a few degrees overnight.

Today:   Partly cloudy skies with patches of light rain, snow and wind will be over the area as last night’s system filters north. We may see some sun poke through in areas as well. Around .2 to .3″ of rain is expected below 2,000′ with 2-3″ of wet snow above this. Ridgetop easterly winds have decreased this morning are expected to remain in the 20-30mph range. Temperatures could reach 32F at 3,000′ today and should be in the mid 40’sF at sea level.

Tomorrow:    We could see a brief break is weather and clearing skies Tuesday morning before another series of warm storms moves through Tuesday evening into the weekend. Rising temperatures are expected to bring rain up to 3,000′ in places. Check out the great graphics from our friends at the National Weather Service below: 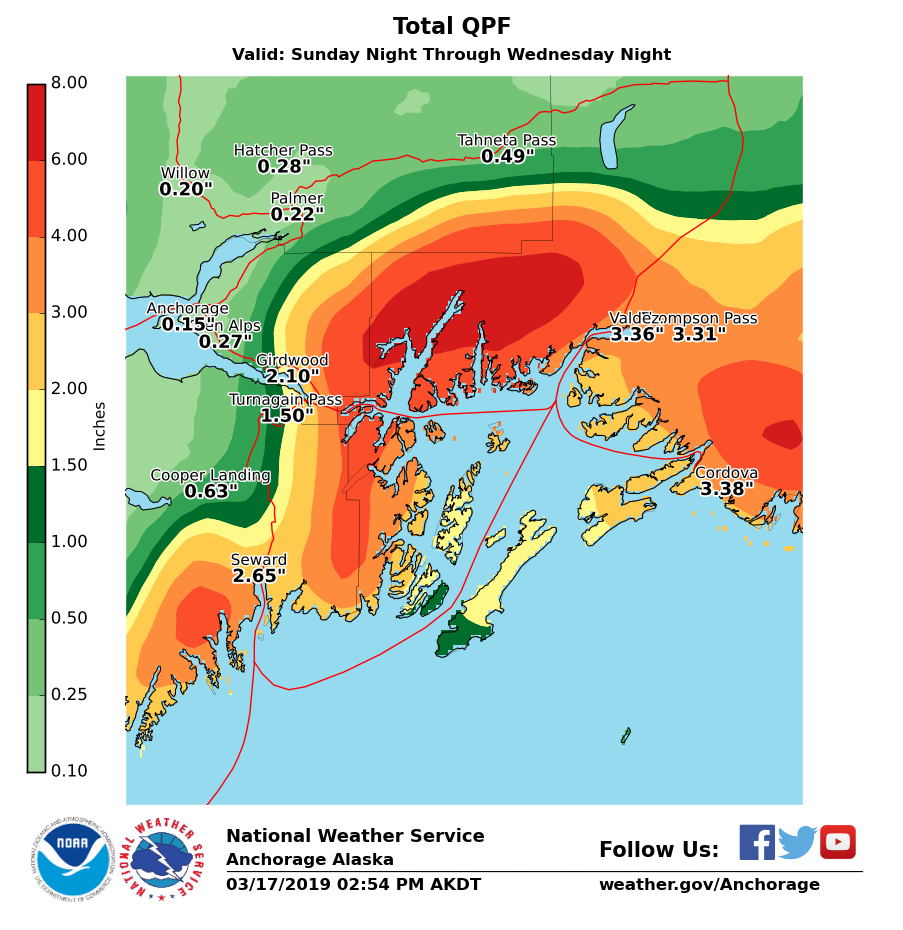 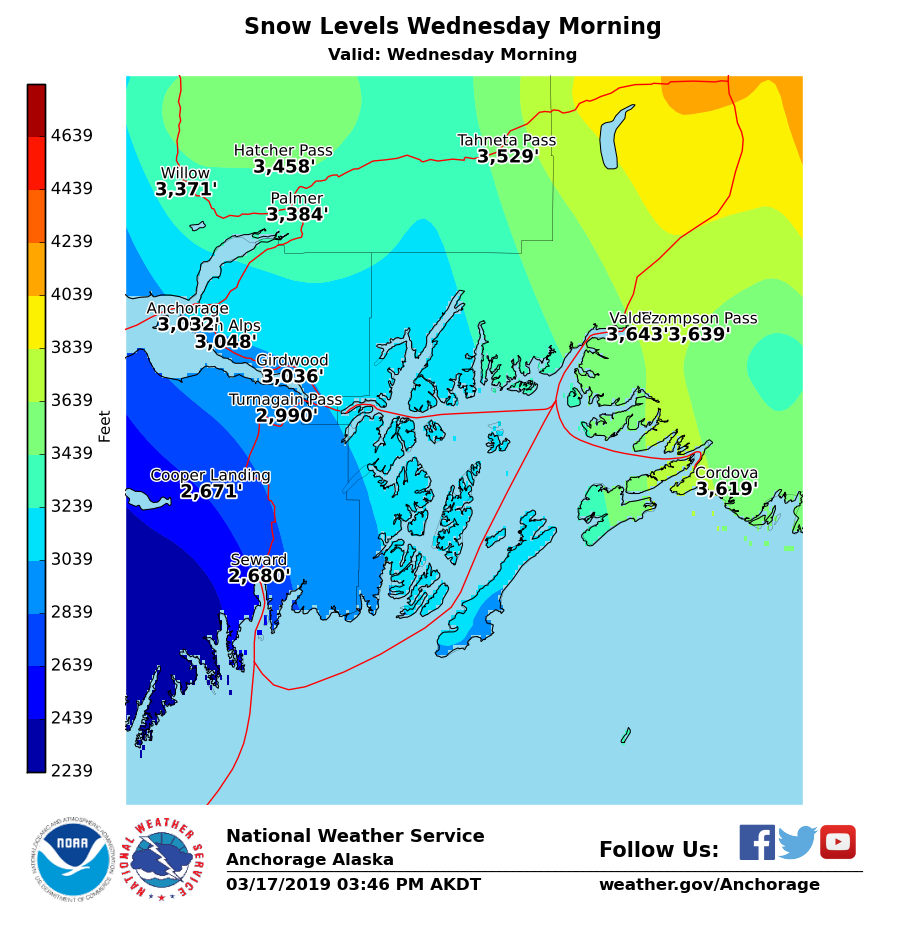