The avalanche danger will rise to  HIGH  today at all elevations above 1000′ due to a storm impacting the region bringing rain, snow and strong winds. Natural and human triggered slabs 2-5+ feet deep will be likely today in avalanche terrain and may step down to older weak layers. Rain may trigger large wet loose avalanches. Travel is not recommended on slopes steeper than 30 degrees and in all runout zones.

The avalanche danger is  CONSIDERABLE  below 1000′ where natural avalanches from above are possible in steep channeled terrain.

Avalanche Problem 1
Deep Persistent Slabs
Deep Persistent Slab avalanches are the release of a thick cohesive layer of hard snow (a slab), when the bond breaks between the slab and an underlying persistent weak layer deep in the snowpack. The most common persistent weak layers involved in deep, persistent slabs are depth hoar or facets surrounding a deeply buried crust. Deep Persistent Slabs are typically hard to trigger, are very destructive and dangerous due to the large mass of snow involved, and can persist for months once developed. They are often triggered from areas where the snow is shallow and weak, and are particularly difficult to forecast for and manage.
Likelihood of Avalanches
This graphic depicts how likely you are to trigger avalanches or encounter natural avalanches while traveling on avalanche prone slopes. Unlikely means that few avalanches could be triggered in avalanche terrain and natural avalanches are not expected. The chance of triggering or observing avalanches increases as we move up the scale. Certain means that humans will be able to trigger avalanches on many slopes, and natural avalanches should be expected.
Size of Avalanches
This graphic depicts the potential size and destructive force of expected avalanches. Small avalanches are not large enough to bury humans and are relatively harmless unless they carry people over cliffs or through trees or rocks. Moving up the scale, avalanches become large enough to bury, injure, or kill people, large enough to bury or destroy vehicles and break a few trees, and large enough to destroy railway cars, buildings, or a substantial amount of forest. Historic avalanches are massive events capable of destroying villages and gouging or altering the landscape.
More info at Avalanche.org

Additional load, either from rain or snow combined with high winds, will be stressing the persistent weak layers of snow we know exist in the snowpack. We have two concerning layers of buried surface hoar and the last two days we have seen remote triggered avalanches. We have also seen avalanches stepping down and failing in weak snow near the ground. If somehow the weather doesn’t turn you away from the mountains, it is important to realize that travel in avalanche terrain is not recommended. Stay out of runout zones. Up to an inch of rain is forecasted to fall to 3000′, maybe higher. Rain to can add weight and stress the snowpack quickly. Avalanches today could be very deep and dangerous. Above 3000′ we could receive over a foot of heavy wet snow. Cornices may also release naturally and trigger slopes below.

Yesterday morning observers noticed that another portion of the Seattle Ridge avalanche path, that was observed releasing on Sunday, had also slid. The trigger is unknown. Sunday’s slide is believed to have been a remotely triggered by snowmachiners on the ridge above. This is one of the avalanches that stepped down to the ground.

Skiers yesterday triggered a large avalanche on Eddies that connected down the ridgeline, while ski cutting a lower angle slope nearby. They reported seeing shooting cracks and then watched the slope release. The crown was 1-5′ deep (average 3′), connected approximately 600′ down the ridge and ran 700′ down the slope. No one was caught or carried. The January 11th buried surface hoar is the suspected weak layer.

On Sunday we recieved reports of a cornice triggered slab in Main Bowl. Here is a photo of the avalanche in motion. The cornice fall is believed to have been triggered by the snowboarders on the ridge. Photo: Eric Moore 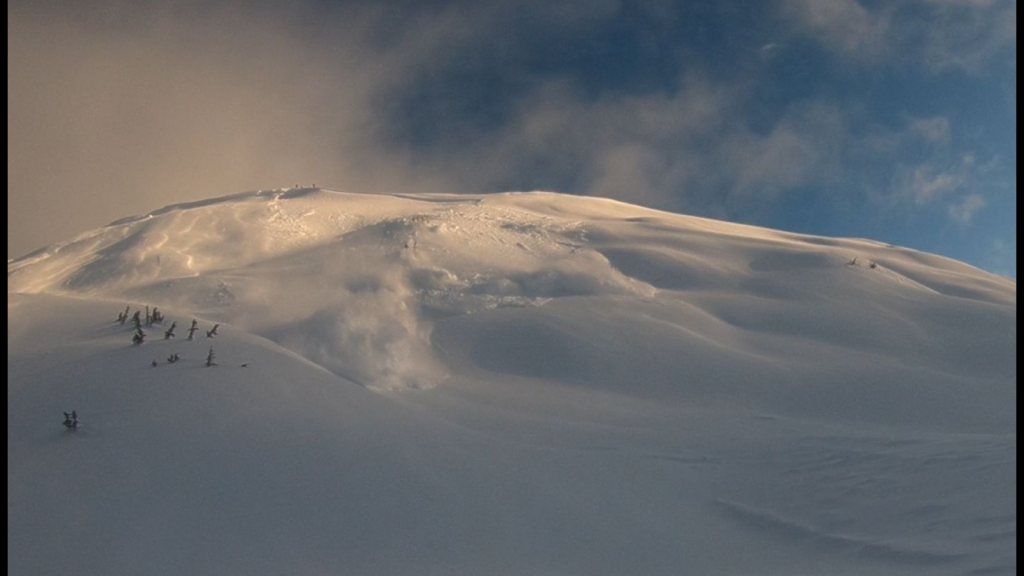 As the rain falling today saturates the surface snow to 3000′ and possibly higher expect loose wet avalanches. They are often preceded by roller balls as rain falling on dry snow can quickly break apart the bonds between snow grains. Surface snow can start failing in a point and fan out. Wet loose avalanches can gain mass as they move down hill and gather snow. They could be quite dangerous today and not something you want to mess with. These can also be triggered by skiers or riders in steep terrain. If water actually moves through the slab to the weak layers or crusts below we could get a wet slab avalanches later in day.

Yesterday skies fluctuated between broken, overcast and completely obscured. There were rain and snow showers in the afternoon, with rain falling as high at 1700′. Temperatures rose into the 30Fs. Winds were light and easterly with few gusts into the 20s.

Today is forecasted to be overcast with up to inch of rain falling to around 3000′, maybe higher. Rain could be heavy at times. Temperatures will be in the mid 30Fs at upper elevations and we could see as high 40F at 1000′. Winds will be easterly 25-35 mph gusting into the 50s. Rain fall looks to intensify tonight but rain/snow line looks to be lower, around 2400′. Temperatures overnight will be in the mid to high 30Fs and winds will be easterly, gusting into the 60s.

Tomorrow will see a precipitation tapering off and temperatures dropping into the teens overnight. Clear, sunny weather looks to be on tap for the remainder of the week into the weekend.