Avalanche danger is expected to increase to HIGH by this afternoon as another round of rain, snow and wind moves in. Around 10-15″ of snow falling today in the Alpine and 1″ of rain below 1,500′ will continue to overload a very unstable snowpack.  Natural avalanches are expected and human triggered avalanches will be very likely. As this stormy weather persists, travel in avalanche terrain is NOT recommended. This means avoiding slopes 30 degrees and steeper, including runout zones.

Below 1,000′ there is a  CONSIDERABLE  danger where debris running into these lower elevations from avalanches above is likely.

**Increased avalanche conditions have been seen across Southcentral, Alaska**

This Valdez Avalanche Center has issued  extreme avalanche danger,  the Richardson Highway was closed yesterday due to an avalanche over the road  . Also, dangerous avalanche conditions have been seen at  Hatcher Pass, recent observations and forecast at  hpavalanche.org.

Motorized use on Turnagain Pass remains closed due to insufficient snow cover.  Please see riding area status at the bottom of this page for the most up-to-date information.

Join us this SATURDAY in Seward:
Know Before You Go – Avalanche Awareness at the Seward Community Library, December 8th,  1 pm – 4 pm  | FREE  Join CNFAIC for a great intro to avalanche recognition and rescue, including hands-on beacon practice.

Temperatures are climbing today ahead of another round of precipitation. In the upper elevations above treeline, we are looking at 10-15″ of moist snow to fall with another 5-8″ tonight. Below 1,500′ up to an inch of rain is expected today with another .5″ tonight. The rain/snow line should creep up higher that we have seen with this storm cycle – up to and possibly over 1,500′. The forecast snow amounts are not exceptional for a HIGH danger day, but what is exceptional is the very unstable nature of our existing snowpack.

There is a very reactive layer of facets sitting under the storm snow from the past week, which is anywhere between 18 and 36″ below the surface. By tonight we should have another foot or so of new snow to add to this slab, making it anywhere from 2-4′ in thickness. In the event these snow amounts verify, avalanches occurring today could be larger than we have seen so far and send debris into valley bottoms. Additionally, they have the potential to propagate very wide and around terrain features on multiple aspects. Warmer temperatures will also add stress to the snowpack and enhance likelihood of triggering.

Just how reactive are these facets? On Tincan, two avalanches were remotely triggered by a group of people yesterday from hundreds of feet away and on different sides of the ridge. What happened was a group skied/rode down Tincan’s Common Bowl (photos below) and re-grouped up on a bump below. While the group was on this ‘bump’ it appears they triggered a collapse and very large ‘whumpf’ that was heard from others in the area. Subsequently, an avalanche released ~600′ away. And, this is the even more impressive part, the collapse traveled over the ridge and released another avalanche on the North side.

Photo of tracks in Tincan’s Common Bowl. Party skied one at a time, grouped up below on knoll, triggered a collapse from knoll that propagated hundreds of feet triggering two separate avalacnhes on different aspects. (Photo: Brad Cosgrove) 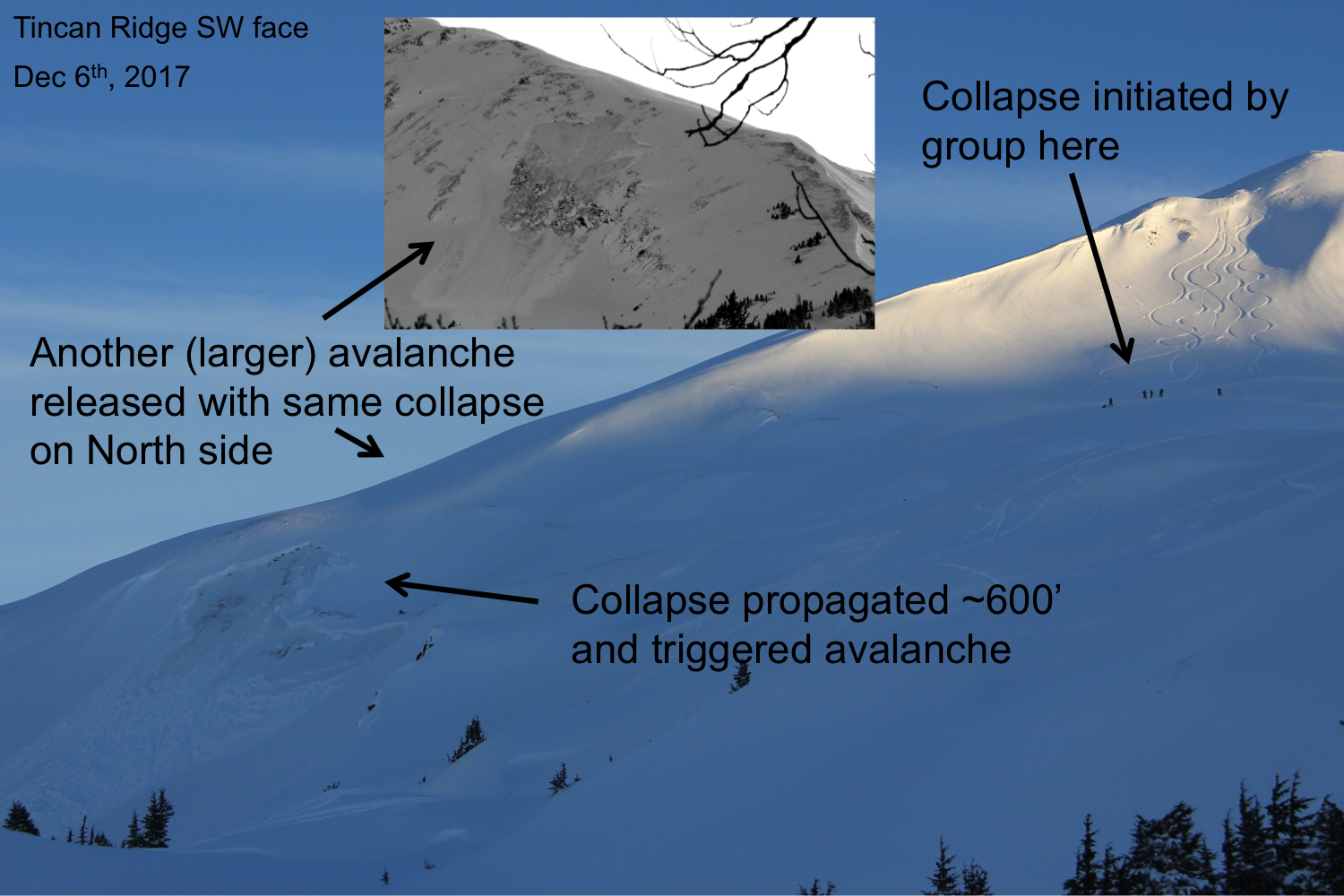 Photo of avalanche that released on the North side of Tincan a thousand feet away or more from the group who triggered the collapse.

Close up on the avalanche on the Southwest aspect and under the CFR ridge. (photo: Gabe Gibbs) 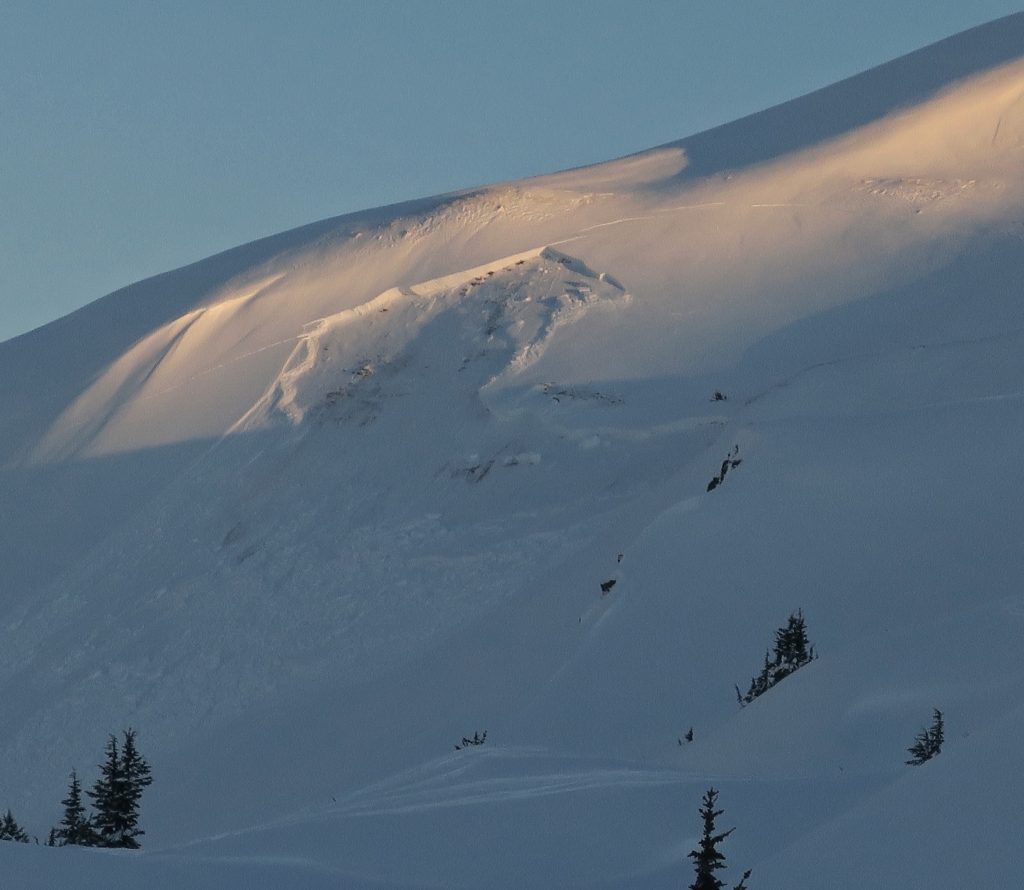 Once again, with a snowpack as precarious as this, this is not the time to be traveling into avalanche terrain. As the snow piles up on top of the facets, the avalanches are becoming larger. They are also likely to become a bit more stubborn to trigger, which makes for a very scary snowpack and hard to manage avalanche problem. Very conservative choices are needed for safe days in the backcounty right now. Sticking to slopes under 30 degrees with nothing steeper above you, or next to you, is key.

Snowpack on Sunburst. The current problem, facets below the slab clearly seen. 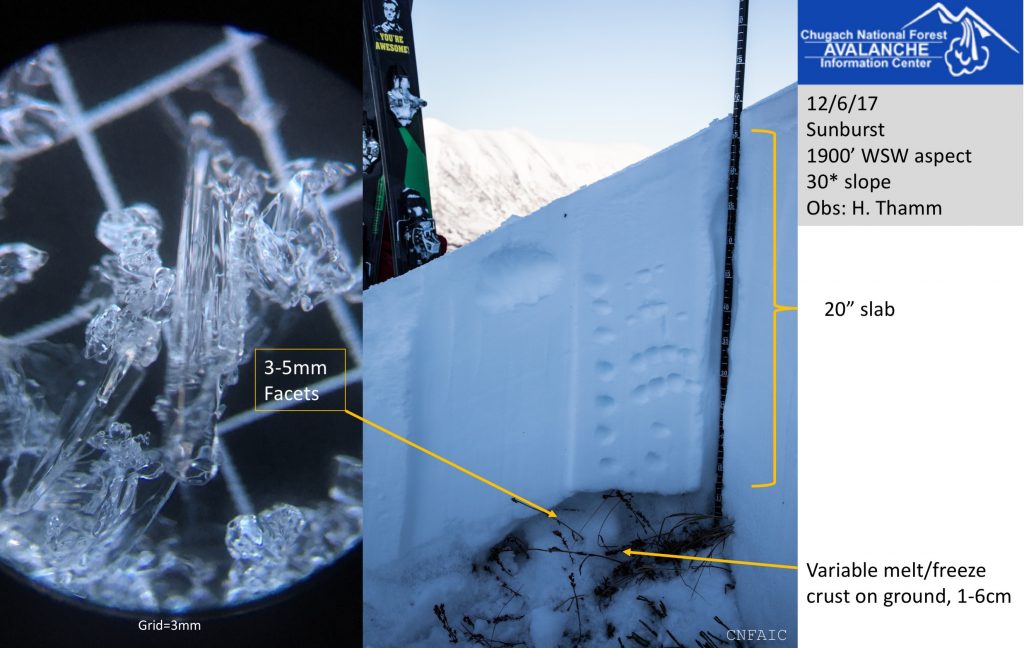 Winds from the East have begun to increase this morning and are expected to blow 25-45mph with gusts into the 60’s or more through tonight. This will continue to load leeward slopes and cross load snow into gullies. Cornices will also continue to build along ridgelines. Naturally or human triggered wind slab avalanches or cornice falls are likely, but what is more of a concern is the potential for one of these to trigger a much larger and dangerous persistent slab avalanche as discussed above.

Yesterday was a break between storms. Skies were mostly sunny and winds were light and Easterly around 5mph. Temperatures dropped slightly at sea level to the upper 20’s and at the upper elevations to the low 20’s F. Overnight, clouds and warmer air has streamed in allowing temperatures to rise a few degrees (low 30’s F sea level and upper 20’s along the ridgelines). Winds have increased overnight from the East and are blowing 25-35mph with gusts up to 50mph.

Tomorrow, this ‘pulse’ of moisture looks to shift East giving us a slight break in precipitation intensity before the fire-hose of moisture points more in our direction late Saturday. In general, this active pattern of warm, windy and wet weather is expected to continue into next week.