The avalanche danger is  CONSIDERABLE where triggering an avalanche 2-4+ feet thick will be likely above 1500′. Remote triggered avalanches are also likely and could run further than expected. Small slopes and large slopes are all suspect and it will be very important to avoid slopes steeper than 35 degrees, terrain traps and runout zones.  Triggering a wet avalanche is also possible today below 2000′.  Cautious route-finding, conservative decision-making are essential.

Below 1000′ the avalanche danger is MODERATE where a wet avalanche from above could run into this elevation band.

**Increased avalanche conditions have been seen across Southcentral, Alaska**

The Valdez Avalanche Center has issued extreme avalanche danger, the Richardson Highway was closed  due to an avalanche over the road . Also, dangerous avalanche conditions have been seen at Hatcher Pass, recent observations and forecast at hpavalanche.org.

Motorized use on Turnagain Pass remains closed due to insufficient snow cover.   Please see riding area status at the bottom of this page for the most up-to-date information.

Join us this SATURDAY in Seward:  Know Before You Go – Avalanche Awareness at the Seward Community Library, December 8th, 1 pm – 4 pm | FREE Join CNFAIC for a great intro to avalanche recognition and rescue, including hands-on beacon practice.

Was yesterday’s rain and snow enough to tip the balance for a widespread natural cycle? Or is our scary snowpack still lingering in place?

Yesterday’s potent storm brought heavy rain to 2000’ and strong Easterly winds averaging in the 30’s with gusts in the 70’s. Precipitation amounts varied across our region favoring Girdwood with 1.5” of rain and Turnagain Pass seeing around .5” of rain. New snow totals in the upper elevations could range from 1-2+ feet. Visibility yesterday was poor and its unknown how much natural avalanche activity may have occurred. The Northern end of Turnagain Pass is likely to have higher snow totals similar to Girdwood.

Incremental loading from multiple storms over the last two weeks in the Kenai Mountains have buried a reactive layer of weak faceted snow near the ground. Numerous human triggered avalanches have occurred almost daily since November 28th and today will be similar. The only difference is the slab is thicker and the consequences of getting caught are greater. Triggering an avalanche could propagate an entire slope releasing on the ground and running the entire slide path. Remotely triggering an avalanche from far away is also likely today, as seen two days ago at Tincan. See photos below. This is not an avalanche problem that can be out smarted or easily managed. Avoiding all runout zones and avalanche terrain steeper than 35 degrees is essential. Obvious signs of instability have been present all week including recent avalanches, collapsing ’whumpfing’, temperatures above freezing, heavy precipitation, and strong winds. Remember these red flags are evidence the snowpack is unstable. Today there will be a break between storms and if the visiblity improves be careful to not get tempted into avalanche terrain including small features with terrain traps.

The avalanche on the left side of this photo was triggered remotely from 100’s of feet away by a party that re-grouped below Common bowl, Tincan SW aspect on Wed. Dec.6. A second avalanche also released on the opposite side of the ridge, a Northern aspect, at the same time. See photo below. This is a really scary snowpack set-up: A dense slab sitting on top of a persistent weak layer of facets connected by a slick bed-surface. Expect this problem to persist through the weekend. 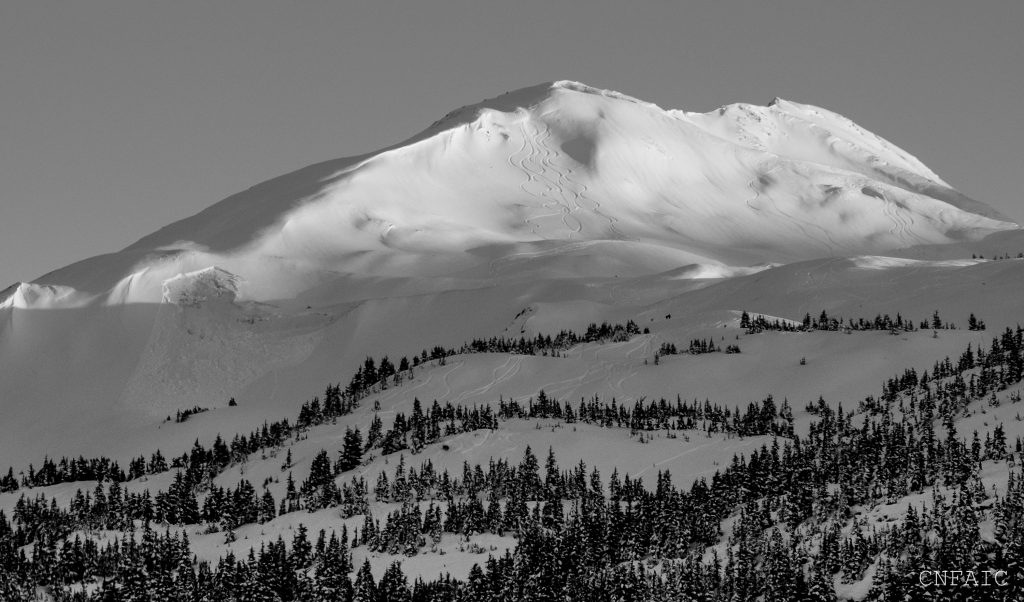 Remote triggered avalanche on a Northen aspect of Tincan, opposite side of the ridge from the avalanche in the above photo. The starting zone of these two avalanches is around 2500′.

Strong Easterly winds have loaded leeward aspects, cross loaded many gullies and loaded corniced ridges. Human triggered wind slab avalanches or cornice falls are likely, but what is more of a concern is the potential for one of these to trigger a much larger and dangerous persistent slab avalanche as discussed above.  AGAIN today is not the day to be pushing into avalanche terrain!

Rain on snow has occurred in the mid elevations (1000′ – 2000′) and wet loose avalanches are possible today. Above freezing temperatures may keep this avalanche problem lingering throughout the day and is an additional reason to avoid being on or underneath steep slopes. Although not much snow exists below 1000’ a wet avalanche from above could run into this zone.

A view of Magnum’s West face from yesterday around 3:30pm. Several small slabs released below 2000′. This area is on the Southern end of Turnagain Pass and has recieved lower rain and snow amounts. 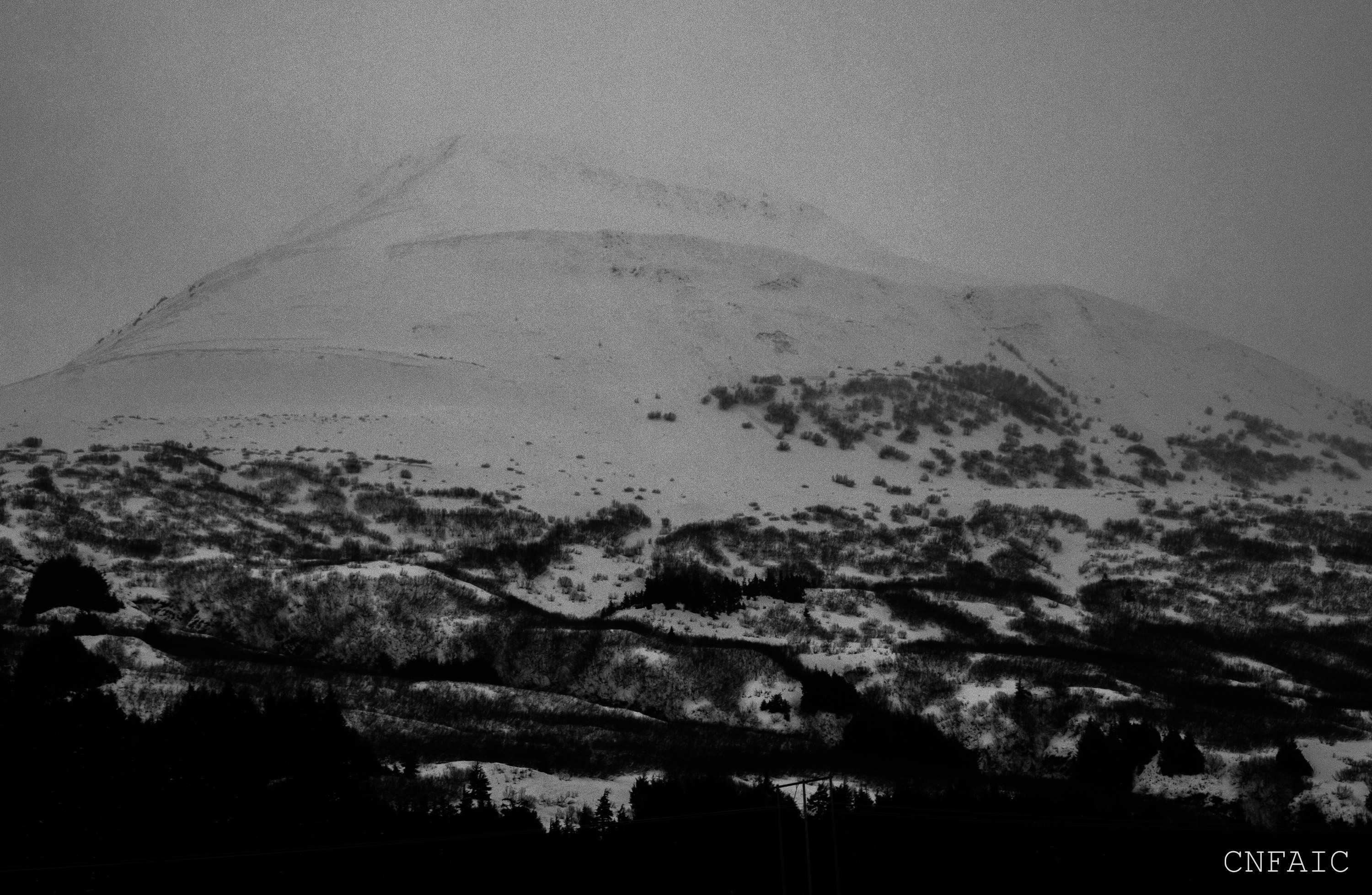 Yesterday a warm and potent storm impacted our region bringing varying amounts of rain and snow to our forecast zone. Strong Easterly winds averaged in the 30’s with gusts in the 70’s. Girdwood was favored receiving 1.55 € of rain at Alyeska mid-way weather station, an estimated 15-24 € in the alpine. Center Ridge Snotel in Turnagain Pass picked up 0.5 € of rain, an estimated 6-12 € of snow in the alpine.   Rain/snow line likely fluctuated between 1500′ and 2000′. Temperatures remained above freezing yesterday and overnight in the mid and lower elevations.

A break between storms is expected today into Saturday. Light precipitation in the form of rain below 2000′ may fall through out the day with a possibility of patches of clear skies. Temperatures should remain warm in the mid 30F’s and may keep freezing level as high as 2000′. Light Easterly winds should be in the 5-15mph range.

Tomorrow East winds are expected increase to Moderate in the morning as another front moves into our region. The exact timing of this storm and precipitation amounts are uncertain, but temperatures are expected remain above freezing bringing more rain to the mid and lower elevations.   Our current South to North jet stream has another warm, wet and windy storm on tap for our region Sunday evening into Monday.

**Seattle Ridge anemometer has been covered with rime and started working yesterday. The reported winds don’t reflect the overall impact of winds to this region.