A LOW  avalanche danger remains in the mountains surrounding Turnagain Pass where triggering loose surface snow could be fast moving, enough to knock you off your feet in steep terrain. Popping out an old wind slab sitting on faceted snow, breaking off a chunk of cornice or triggering a larger €˜outlier’ avalanche are all in the realm of ‘unlikely possibilities’ but worth noting.

*Today pay attention for changing weather conditions and always practice good travel habits; expose one person at a time, watch your partners, have an escape route planned and group up in safe zones.

If you are headed to steep slopes, pay attention for ‘facet’ sluff (yesterday we received a report that loose surface snow was becoming fast moving and more difficult to manage than previous days.) Also watch out for cornices and old wind slabs near ridges – all of these avalanche concerns are too small to bury a person, but could take you for a ride in an undesirable place. Lastly, be aware of an ‘outlier’ slab avalanche that could fail mid-pack due to the Nov 16 buried surface hoar, especially in areas that haven’t seen much traffic.

Light snowfall is expected to start this afternoon with the possibility of 1-4 inches falling this evening. This is not quite enough precip or the right timing to elevate the danger rating for today. As always be prepared to change your plans should snowfall arrive early and intensity increase beyond what is forecasted.

As we anxiously await a change in the weather we have been taking inventory of the surface conditions and snowpack structure in our region. It has been just over two weeks since our last snow event left 6-10”, and cold and clear weather has dominated our region. This has been the perfect recipe for creating weak, poorly bonded snow: near surface facets and surface hoar, as well as depth hoar in shallow/thin areas of the snowpack. With a few inches of snow expected tonight and heavier amounts forecasted into the weekend we will see just what the avalanche conditions will do. Should we get significant precipitation be prepared for dangerous avalanche conditions this weekend and into next week.

An observer sent in this photo yesterday of the Eastern facing slopes of Seattle Ridge, with a great question, “Does this count as skier compaction?” Well… don’t get excited yet. It’s too soon to tell if the weak surface snow (one of several future weak layers) was disturbed enough in this high traffic area to truly be considered compaction. AND we mustn’t forget about the November 16 surface hoar that is still buried 1-2’ below the surface in some areas. For more discussion on the topic of ‘skier compaction’ check out the observation HERE. Photo by Andy Milauskas 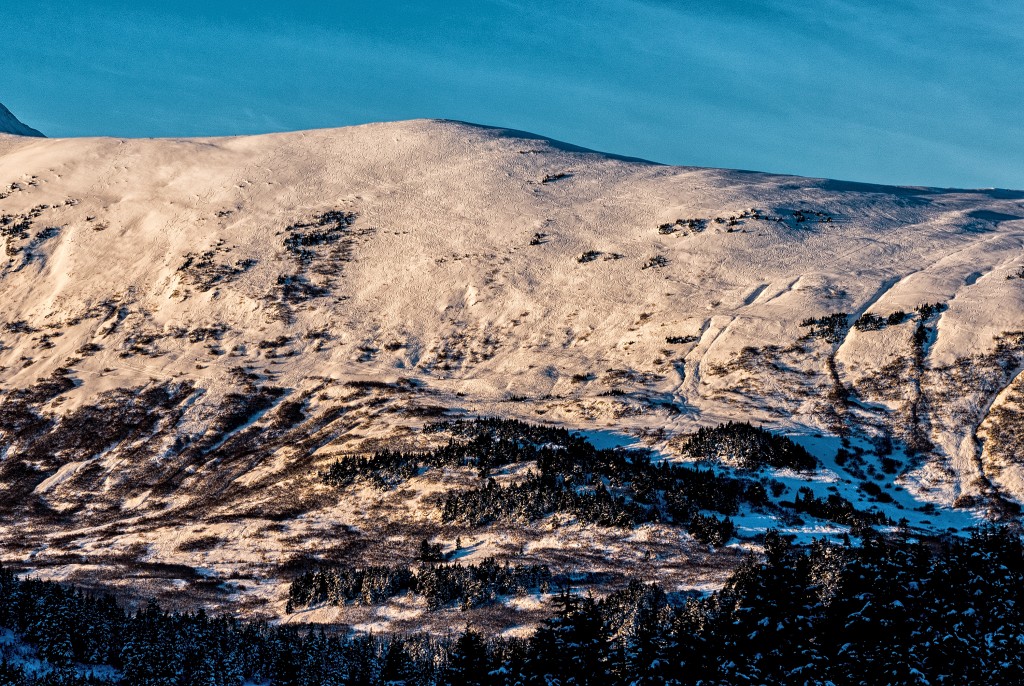 Yesterday an inversion persisted with temperatures averaging in the low 20F’s the alpine and single digits (F) near sea level. Skies were mostly clear with valley fog at lower elevations. Ridge top winds were calm and no new precipitation was recorded. Conditions were similar overnight.

Expect partly cloudy skies to become overcast in the afternoon and light precipitation to start falling mid-day. Light winds will shift from the South becoming Easterly and increasing to moderate by this evening. Temperatures are expected to increase into the high 20F’s and 1-4 € of snow could fall by this evening.

This is the first major pattern shift in weeks and several low pressure systems are on track to impact Southcentral, Alaska. Right now Saturday and Sunday look to be the more precipitous events for Western Prince William Sound. There is some uncertainty about how warm these next few storms will be, but rain was mentioned near the coast and inland at times over over weekend in the NWS  forecast discussion.