Wednesday looks to be very similar to today. In general all the avalanche instabilities that have been mostly confined to the 1000′-2500′ elevation band may slowly creep into the Alpine and become more of an issue as temperatures remain warm with periods of rain and sun. Be aware of wind slabs and wet snow in the alpine, where the avalanche danger could increase to  MODERATE.

In the Treeline zone (1000’-2500’) the avalanche hazard remains complex due to glide avalanches that threaten access to safer snow in the Alpine. Our biggest concern remains focused on the motorized uptrack where two large glide avalanches recently on Repeat Offender including one shortly after 5:30pm yesterday. Considering how many more cracks threaten this zone, we are recommending that people not travel on the uptrack or in runout areas along Seattle Ridge.

On the non-motorized side of the road be aware of new cracks forming in popular terrain, like the West face of Cornbiscuit and Magnum. Our message remains the same: AVOID being under glide cracks and respective runout zones. To be in the wrong place at the wrong time when a glide releases could likely be deadly.

Photo on right side was taken yesterday afternoon. This new glide avalanche occurred within the last two days and more glides threaten the uptrack.

Close up of glide cracks above the uptrack on Seattle Ridge. 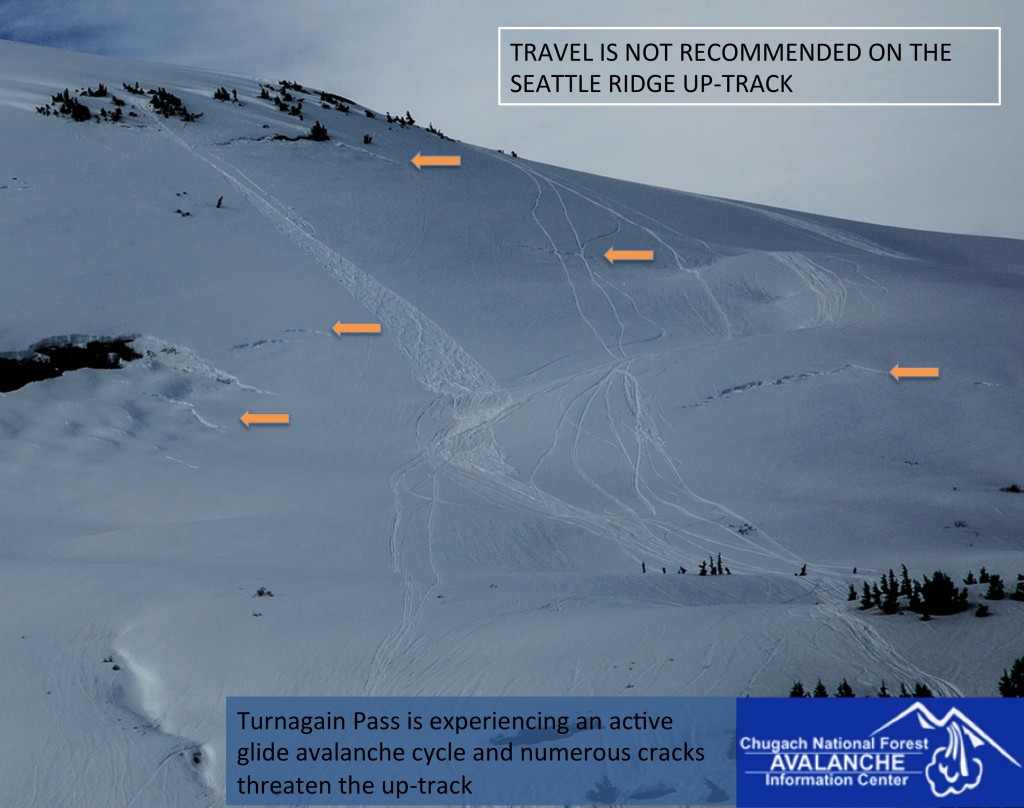 Over the last few days wet loose avalanche activity has slowed down in Turnagain Pass due to a deeper freeze in the mid elevation band. However outside of our core advisory zone, in Portage Valley, natural avalanche activity has been observed in steep channeled terrain along the Byron Glacier Trail. Extra caution is warranted in this particular area and leaving the established trail is very dangerous. Today there is possibility of both rain and sun, both of which will increase the potential for natural wet loose avalanche activity in this particular zone.

In the mid elevation zone where wet snow is falling on a hard surface triggering wet loose activity will be likely on steep terrain where the surface snow is wet. If the sun makes an appearce today small natural wet loose activity will be possible on solar aspects in the alpine. Pay attention to snow depths; wet ‘sluffs’ will be proportional to the amount of snow that falls today.

Video taken on 4/17 by a public observer who witnessed an avalanche close to the Bryon Glacier trail while hiking.

In the Alpine there is currently not a lot of snow available for transport, but 2-3” of new snow is expected today. This combined with 20-30mph winds could form small isolated wind slabs on steep features in the alpine. Blowing snow and soft-pillowed shaped formations are clues that wind slabs are forming.

Cornice fall – Where cornices are large be skeptical of their stability. Recent cornice fall has been observed, and in some area these features are gigantic. Give them lots of space and don’t hang out underneath one.

Today Scattered rain showers are expected throughout the day with mostly cloudy skis, but periods of sun are always possible. Rain/snow line will be around 2500′ with an addition 0.2 € of (snow water equivalent) expected today, 2-3 € of snow in the alpine. Ridgetop winds, averaging 20-30mph, will be from the East.   Daytime high temperatures for 1000′ are expected to be around 45F and overnight lows in the mid 30F’s.

Similar temperatures and showery conditions are expected tomorrow, before another possible window of clear skies on Thursday.