The avalanche danger remains  CONSIDERABLE  below 2500′ due to glide avalanches that are releasing daily in popular recreation areas. Avoidance is our best tactic right now: this means steering clear of being under the runout of glide cracks.  In addition, human triggered and natural wet loose avalanches are possible on steep southerly facing slopes with daytime warming.

*In the Alpine where the avalanche danger is generally  LOW,  be aware of lingering wind slabs in steep terrain from Tuesday’s few inches of snow and wind (Girdwood Valley saw up to 10″). Also, shallow wet sluff in Tuesday’s snow is possible.

AVALANCHE OUTLOOK for Friday, April 22nd:
For Friday we could see an increase in Easterly winds, a chance for light rain and a few inches of snow above 2,000′. Avalanche danger will likely remain LOW in the Alpine; unless precipitation amounts increase in which case shallow winds slabs and sluffs in the new snow would be possible. A CONSIDERABLE danger below 2500′ for glide avalanches will remain for Friday.

Full-depth glide avalanches remain our primary concern as they continue to release daily. One new glide avalanche was noted yesterday in Turnagain Pass. This was on the West face of Magnum (yes, the glides are moving across the road…). On the Seattle Ridge side of the road there is not much snow left to slide; the exception being above the motorized up-track (photo below). Our message remains the same: AVOID TRAVEL UNDER GLIDE CRACKS. These are not ‘manageable’ avalanches and they are not triggered by people – travel among glide cracks can be done but not right now since they are releasing so consistently.

Photo below: Glide avalanche in past 48 hours on the West face of Magnum. This is a POPULAR area to tour and there are other cracks near this avalanche that have yet to release. Avoiding this zone is recommended. 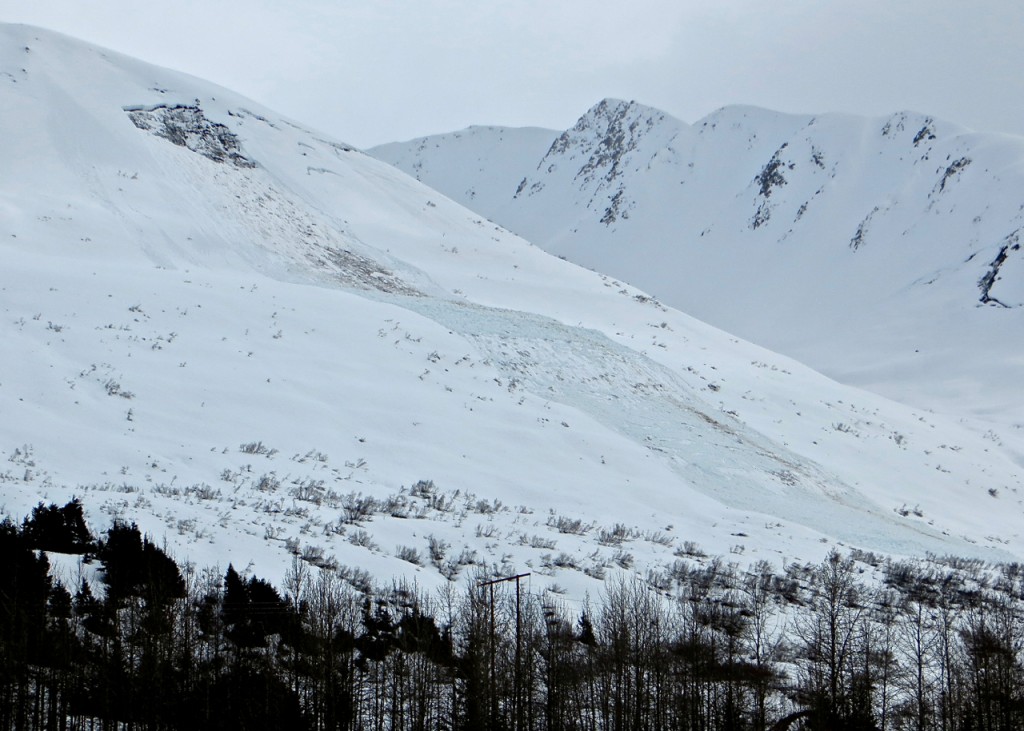 Photo below: The Seattle Ridge up-track seen yesterday, Wednesday, afternoon. No new glides have released in 4-5 days but that doesn’t mean one may release today. 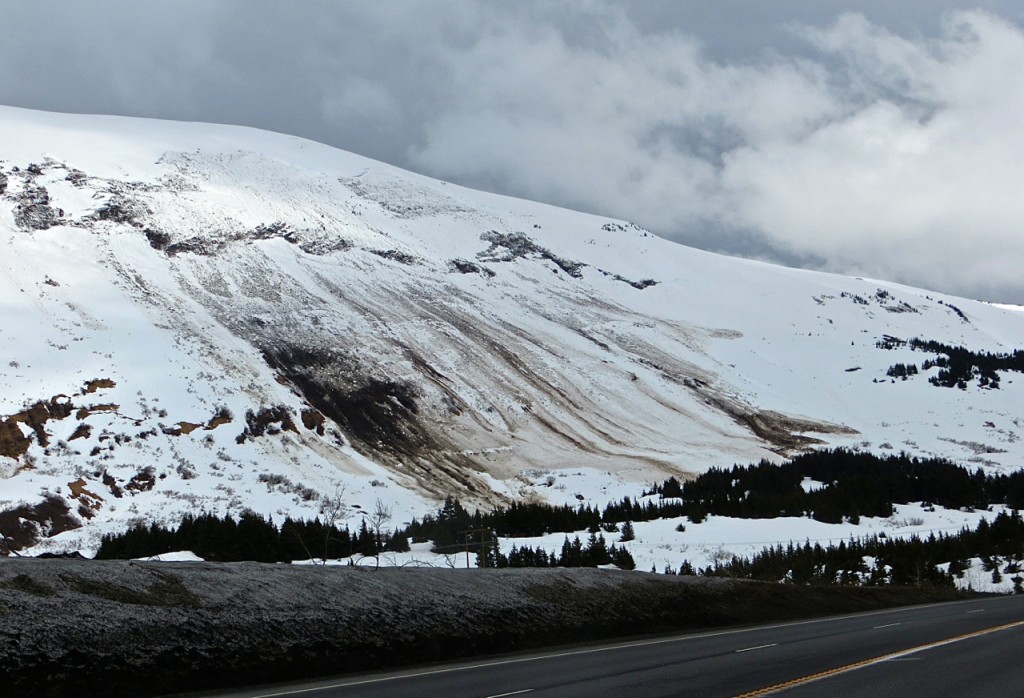 A warm sunny day is forecast for today (Thursday) and with that means possible wet loose avalanche activity. Clear skies and cold temperatures overnight have re-frozen the pack but direct sunshine today should reverse this effect. At the mid-elevations watch for hard surface crusts to soften (this is where it rained on Tuesday). At the high elevations, watch for any new snow from Tuesday to become wet and possibly release into shallow wet sluffs.

In high areas of the Alpine where 2-6″ of new snow fell on Tuesday, watch for lingering wind slabs that could still be touchy. These are likely to be quite shallow in the Turnagain Pass zone but thicker (10-14″) in the Girdwood Valley where up to 10″ of snow fell. With an old crusty surface underneath, identifying drifts and how the winds blew the new snow around should be fairly easy.

*Watch for the sun to heat up and re-activate wind slabs later today in the Girdwood/Portage Valley and other areas that received snow from Tuesday.

**CORNICES:  Watch for cornice falls in the Alpine. There are been a few that have released in the past week and sunshine today will add to their instability.

Two days ago, on Tuesday, a weak system moved through and added .2-.5″ of rain up to elevations between 1,500′ and 2,000′. For snowfall, there was 2-4″ of heavy snow that fell above 2,000′ in the Turnagain Pass area with up to 10″ in favored areas of Girdwood Valley and Portage Valley (believe it or not). The snow and rain was accompanied by strong Easterly winds averaging in 25-30mph range. This springtime storm moved out yesterday and during the past 24-hours we have seen no precipitation and light Easterly ridgetop winds. Temperatures were warm yesterday (40’s at 1,000′).

Overnight, skies have cleared and temperatures have cooled dramatically. Valley bottoms are in the 20’sF and an inversion in place with ridgetop temperatures near 30F. For today, mostly clear skies are on tap with possible valley fog. Ridgetop winds are slated to be light from the East, 5-10mph. The sun should warm things up dramatically by the late afternoon.

For Friday we are expecting winds to increase from the East, cloud cover to move back in and a chance for precipitation as a low-pressure spinning in the gulf pushes a frontal band our way. Moderate Easterly ridgetop winds and showery conditions look to persist into Saturday and Sunday. Significant snowfall is not expected and the rain/snow line should be close to 2,000′ once again.