The avalanche danger is  MODERATE  today above 1000′. Glide cracks continue to release naturally and without warning and threaten a lot of mid-elevation terrain. Identify slopes with glide cracks and avoid being within the runout of a glide. Changing conditions today in the Alpine will make it possible to trigger fresh wind slabs and loose snow avalanches. Avoid travel on or under large cornices.

* Similar avalanche conditions exist in the Summit Lake area, but the snowpack  is more complex and variable. Click  HERE  for a video and observation from Wednesday that shows an additional concern to be aware of.

Tune-up your avalanche skills for Spring Break! Know Before You GO!

TOMORROW – Saturday, March 12th join us at Turnagain Pass for a FREE Avalanche Rescue Workshop from 11 am-12:30 pm at the motorized lot on Turnagain Pass. This class is open to everyone. Please bring your beacon, shovel and probe. For more info click  HERE.  Look for the blue CNFAIC Avalanche trailer. We hope to see you all there!

In the Alpine be on the lookout for a variety of surface snow instabilities and changing conditions as a storm system moves over the region.

Wind Slabs: Today new snow and sustained ridgetop winds may combine to form fresh, tender wind slabs in leeward areas. Look for pillowed snow, drifts and shooting cracks. These new slabs may break easily and catch you up, especially in steep terrain. Check out the FS National Avalanche Center’s Wind Slab tutorial HERE. The new snow is falling on a variety of surfaces and may not bond well.

Loose snow: On shaded aspects dry loose snow sluffing will warrant management in steep terrain.  Sluffs have been fast moving with the ability to entrain a significant amount of surface snow in big terrain. Any new snow will add to the potential and may create this hazard on solar aspects as well if the new snow does not stick to the sun crust.

Cornice falls: Very large cornice features can be found along most ridgetops throughout the advisory area. Cornices have a tendency to break further back than expected. Give them lots of space, and limit time under them. Should you get too close, a snowmachine or person could tip the balance.  The recent fatality of an avalanche professional in Oregon due to a large cornice fall is again a tragic reminder of how dangerous these can be, especially in high consequence terrain. Additional loading today may make cornices more touchy. 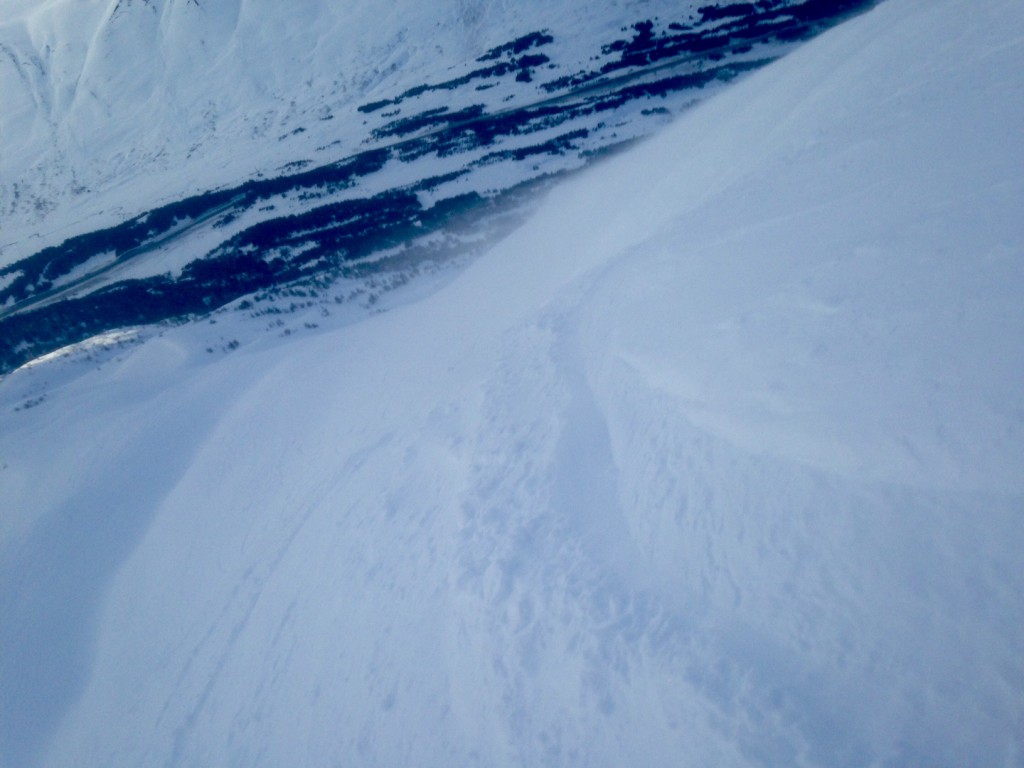 AVOID travel under glide cracks. This week has been a particularly active glide avalanche cycle. Glide cracks continue to threaten large areas of terrain throughout Turnagain Pass, Girdwood, and Summit Lake. There were several new glide avalanches seen Wednesday from the Seward Hwy, and a large glide released on the East face of Seattle Ridge a few days ago. Glide cracks are on all aspects within the mid-elevation band (1000′-2500′), and some areas like the SW face of Cornbiscuit and Tincan are covered. This avalanche problem is impossible to predict and is not associated with human triggers. We have been talking about the glide avalanche problem for over two months in the advisory and as long as glide cracks continue to open up, move and release, we will stress the importance of avoiding them. Click HERE for a forecaster video about glides from yesterday on Turnagain Pass. We really want to avoid any human involvement with a large glide avalanche!

Some important things to remember:

1) What the heck are we talking about?

Glide Avalanches (definition from the FS National Avalanche Center Encyclopedia): Glide occurs when the entire snowpack slowly slides as a unit on the ground. Glide avalanches can be composed of wet, moist, or almost entirely dry snow and pose a hazard that is very difficult to forecast. They are often preceded by glide cracks (full depth cracks in the snowpack), though the time between the appearance of a crack and an avalanche can vary between seconds and months.

2) We really do not understand when they will release. Unfortunately there are no rules of thumb to give. They release during the day and at night, with cooling, with warming, during storms and after storms, on sunny slopes and shaded slopes. The only way to manage the uncertainty is to avoid time spent underneath. Travel in places like Bertha creek under the South face of Cornbiscuit could be particularly hazardous due to being in a tight terrain trap if one releases from above and buries you in the drainage.

3) Just because one glide released on the slope it doesn’t mean others won’t. Many cracks only partially release and then have additional hangfire or the potential to release more. The glide avalanche on Pyramid is great example of this. Click HERE for the 2/28 observation of the initial release and HERE for 3/7 observation of the additional piece.

4) This is an unusual string of glide cycles and an unusual winter. The glide cracks and avalanches aren’t related to other avalanches problems. They are not Wet slabs or Deep slabs. This can be confusing. They are a separate hazard that needs special consideration. Avoid skinning, skiing, hill climbing, parking or picnicking underneath.

This photo from Wednesday is worth reposting today. This is the glide hazard that threatens the Bertha Creek drainage.  Photo: Liz Repetto 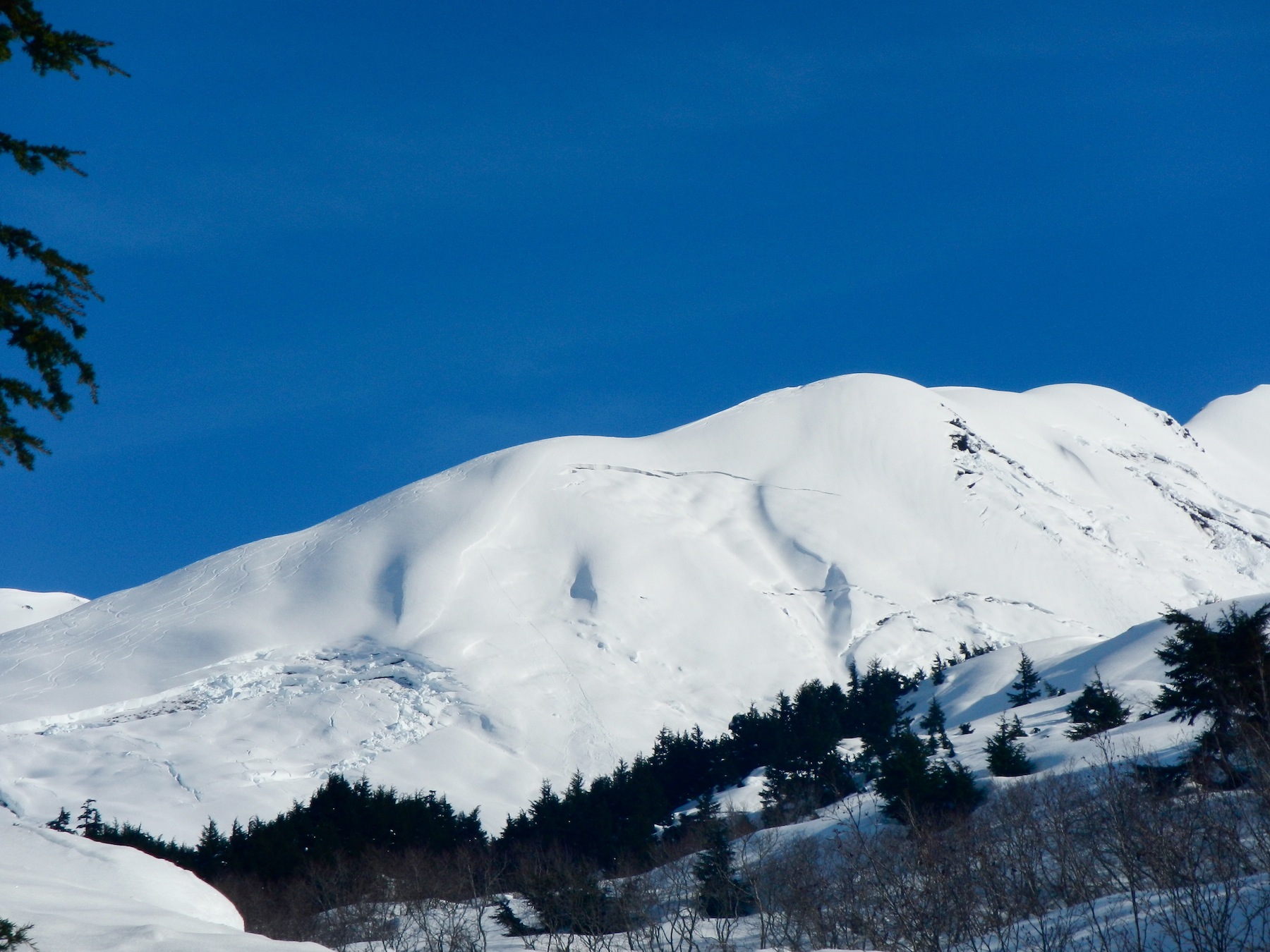 Yesterday was mostly sunny in the morning with clouds building in the afternoon. Winds picked up overnight gusting into the 50s from the east. Temperatures were in the mid 20Fs to high 30Fs. A couple inches of snow fell on Turnagain Pass overnight.

Today will be mostly cloudy with snow showers. 3-6″ of snow is forecasted to fall throughout the day. Winds will be easterly, 15-30 mph with higher gusts. Temperatures will be in the mid 20Fs to mid 30Fs.

The snow showers will continue tonight and taper off tomorrow with some sunshine on tap for the weekend as a ridge of high pressure moves over Southcentral Alaska.