The avalanche danger continues to be HIGH in the Turnagain Pass and surrounding mountains. Between 3 and  4+ feet of heavy snow has fallen in less than two days resulting in very large and widespread avalanche activity. Today, the storm has abated but dangerous avalanche conditions still exist. Large natural avalanches, running to the valley bottoms, are still possible. For people traveling in the backcountry, avoiding all avalanche terrain, slopes 30 degrees and steeper, including runout areas in the flats, is recommended.  The danger is MODERATE below 1,000′ where debris from an avalanche above may run.

This travel advise and warning extends to the Summit Lake area as well where dangerous avalanche conditions exist. See Saturday’s  Summit Lake Summary  at this link.

**Today is a day to be patient and let the snowpack adjust to this new load of heavy snow.

It was quite a day in the mountains yesterday as a fast moving storm rolled through. A “mini-snow-pocalypse” of sorts that dropped several feet of snow in ~30 hours!! See storm totals below. This was a text book ‘rapid loading’ event and it is no surprise that widespread and large avalanche activity resulted across the region. With such limited visibility we only saw the aftermath of the activity, in the form of debris piles – photos below. However, one person did get a glimpse of the terrain later in the day:

Quote from frequent and longtime skier in the Turnagain Pass area, Eric Opland:
“Going through Turnagain it started to clear and we saw fractures on almost everything, including one that included most of the Sunburst cornice lines. Then when getting close to the Placer river we watched another slide happen on the first peak to the east of the Portage road off a south aspect, again decent size.” Read the entire write up HERE.

For today, skies will hopefully clear enough to see above treeline so we can take stock of yesterday’s damage. Again, although the storm is over, the snowpack is still suspect to being very unstable. The new snow fell on a variety of surfaces, many of which are weak (surface hoar and weak faceting snow). How long it will take the new and old snow interface to bond is a big uncertainty at this point and very conservative terrain choices will be necessary as we move into the week.

Adding to the instability today will be continued Easterly winds (20-30mph) that will keep loading slopes and building cornices. In the event there is a true break in weather and the sun comes out, the sun will act to de-stabilize the pack as well. Needless to say, give the mountains a break today. Travel on slopes more than 30 degrees and in runout zones (including valley bottoms) is NOT recommended.

Photo: Debris piled up in the Peterson drainage area along the Seward Highway between Portage and Girdwood. 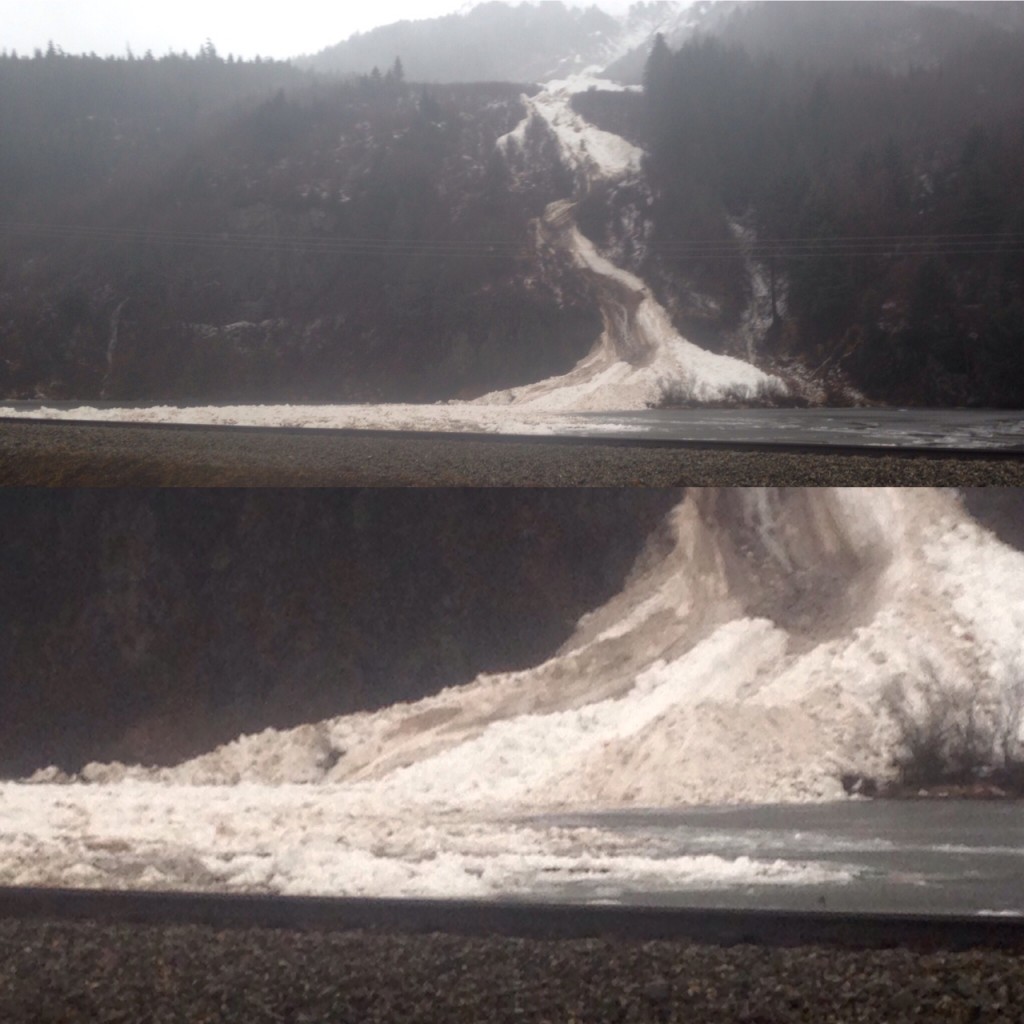 It was a pretty crazy day at the Pass, see Aleph’s quick video below for an idea:

Photo: More debris along the Southern end of Seattle Ridge. With such limited visibility we did not see above treeline. 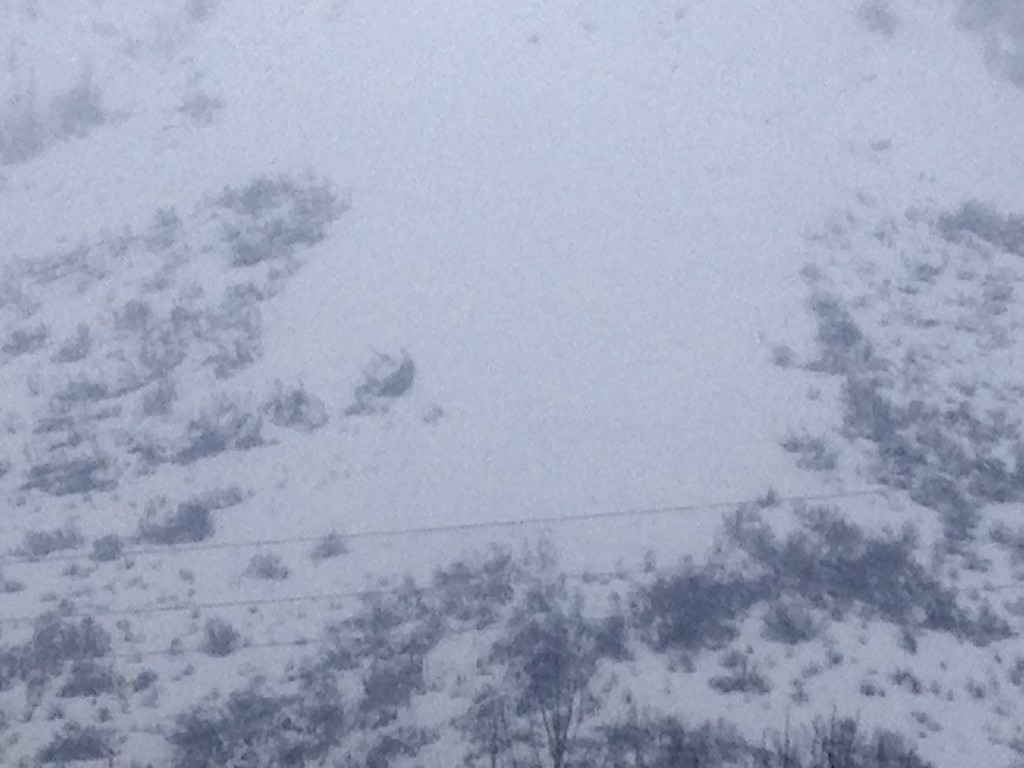 Cornices are likely to be a main player today in avalanche activity. After a storm like we just had, cornices should have grown, be on the verge of falling and could trigger very large avalanches below that could run to valley bottoms. Many likely broke off during the storm, triggering avalanches that we have yet to see due to the lack of visibility yesterday. With either continued wind or even some sunshine today, both these weather factors can aid in tipping the balance for a natural cornice fall. Just one more reason to give the mountains some patience today.

With the chance for visibility today, we will be looking out for any new glide cracks that released during the storm. In an effort to document this season’s unique glide activity, we are keeping track of when and where glide cracks form as well as release. As always, limit/and or avoid exposure under glide cracks.

During the daylight hours yesterday we saw the peak of the storm cycle and then during the overnight hours, its end. Precipitation quieted down around 6pm after roughly 16-20+” of snow fell during the day above 2,000′; this is on top of the 16-20″ from Saturday. The rain/snow line began around 500′ at the onset of the storm Saturday then rose to 1,200′, or a bit higher, at the peak. Strong Easterly winds have been in place during the past 48-hours, averaging 30-50mph with stronger gusts. Overnight, temperatures have cooled and are ~32F at 1,000′ and the mid 20’sF at 3,500′.

Today, we are expecting instability showers over the area bringing partly to mostly cloudy skies and a chance for 2-6″ of snow at the higher elevations. We could even see the sun break through in areas. Temperatures should rise a bit (~35F at 1,000′) bringing the rain/snow line to ~1,200′. Easterly winds along the ridgelines are expected to remain moderate to strong in the 20-30mph range.

For Tuesday, another low-pressure system makes its way North from the Pacific bringing warm temperatures and moisture. We could see higher rain/snow lines with this system and another dose of 2-3″ of water – stay tuned.

Photo: A true storm day on the Pass. 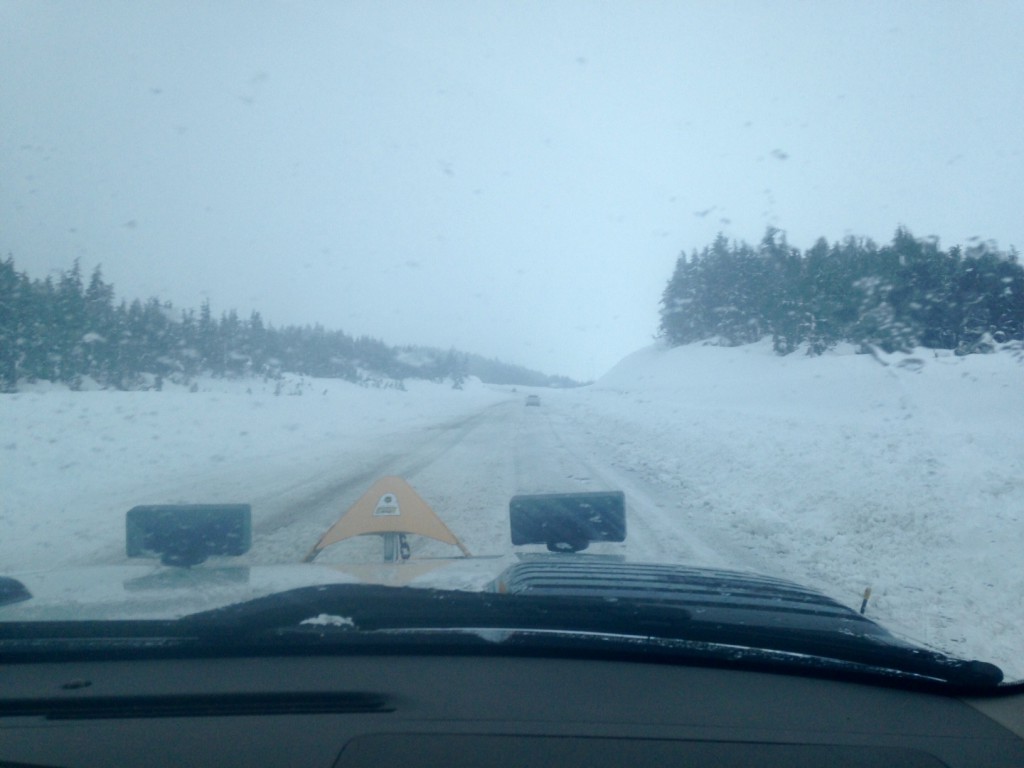