An Avalanche Warning has been issued for the backcountry areas of Turnagain Pass and Girdwood Valley with  the National Weather Service. This warning is in effect all day, Feb.21 through tomorrow, Mon, Feb.22 at 6am.

An intense storm will continue today in Turnagain Pass where the avalanche danger remains HIGH both in the Alpine and at Treeline (above 1000′.) Large natural avalanches up to 4′ thick could easily run to the valley floor. Strong sustained Easterly winds combined with 24″ of new snow fell on a weak pre-existing surface and another 12-15″ is expected today. Below Treeline (1000′) a MODERATE avalanche danger exists where avalanches occurring from above may run.

This set-up is primed for human triggered avalanches. Travel in avalanche terrain is not recommended until the snowpack has had time to adjust.  This is a good day to head to the ski resort, but if you do venture into the backcountry choose mellow terrain and avoid all run out zones completely.

*Shallow snowpack zones: South of Turnagain Pass and Summit Lake area have old weak layers in the snowpack and have also received additional loading; new snow and strong winds overnight. If heading to these areas be on the lookout for any obvious signs of instability and adjust your plans accordingly. Visit the Summit Lake Summary for recent description of the snowpack.

Overnight 14-16″ of new snow fell along the roadside of Turnagain Pass and “challenging” driving conditions were reported this morning. Remember plow drivers are doing their best to get the road cleared first, and parking areas are a second priority. Please be respectful of the demanding job these guys have and avoid parking in places that haven’t been plowed. With an additional 12-15 € of new snow forecasted for today, it is likely that driving condition may worsen and parking areas may not get cleared until the storm has passed.

Overnight a rapid loading event accompanied by strong Easterly winds has deposited over 24″ of new snow in the alpine and another 12-15″ is expected today. This snow has fallen on a weak pre-existing surface and large natural avalanche activity is very likely today and could easily run to the valley floor of Turnagain Pass. HUMAN TRIGGERED AVALANCHES up to 4’ thick WILL BE LIKELY on slopes steeper than 30 degrees.  It will be extra important to give steep slide paths, like Seattle Ridge, a lot of space today. Do not put yourself in the way of a run out zone.

Wind Slabs: Natural wind slab avalanches up to 4’ thick are expected in the alpine elevations and could easily run the entire slide path. Yesterday wind loading was observed at all elevations and wind directions were confusing at lower elevations. Expect wind slabs to have formed on all aspects and elevations.

Storm Slabs: In areas protected from the wind, storm slabs up to 2’ thick could be easily triggered on steep terrain features and will be large enough to bury a person. Keep slope angles less than 30° and stay away from terrain traps.

Loose Snow: Sluffs due to heavy snowfall likely occurred last night and again will be likely today. These have the ability to trigger a slab avalanche on their way down.

Snowstake at Turnagain Pass over a 12 hour period shows over 2 feet of drifted snow. 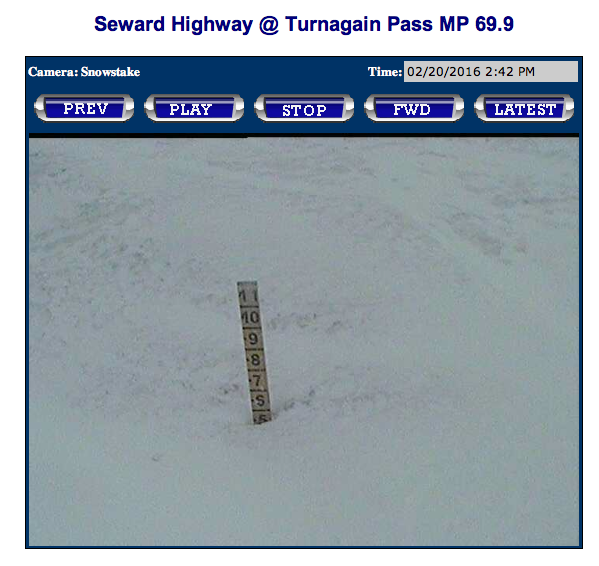 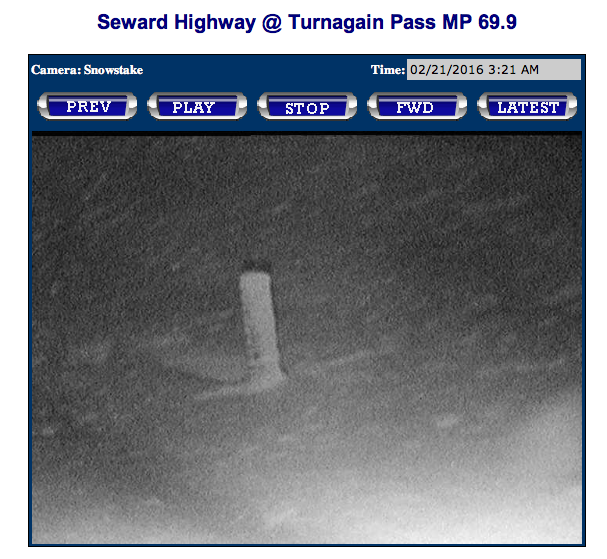 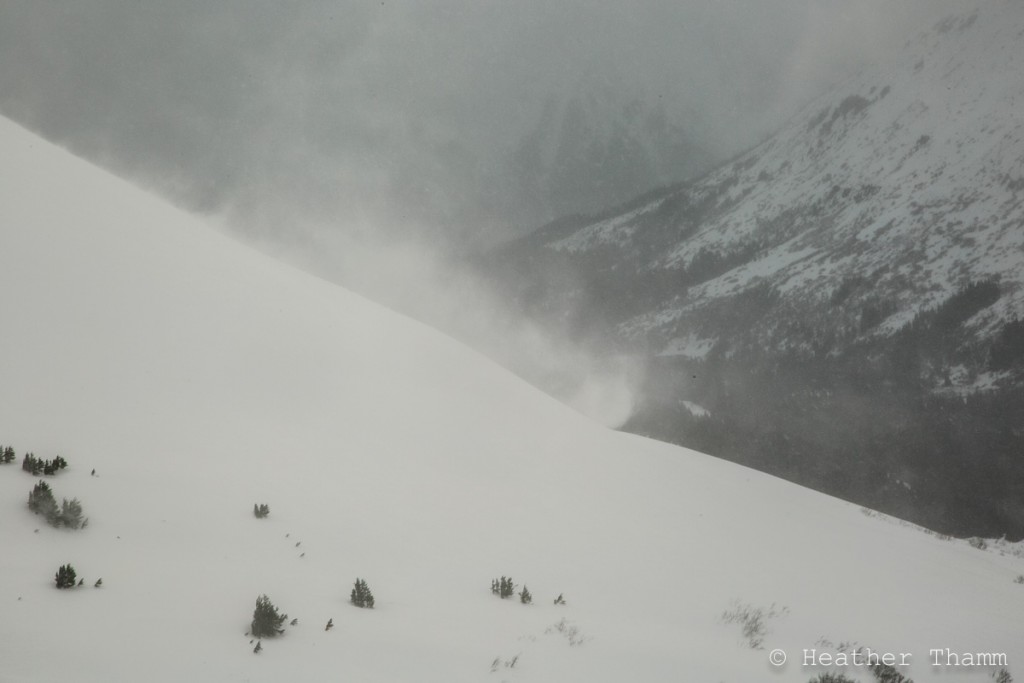 Cornice formations are extremely large and have received significant loading overnight. Natural cornice fall activity is anticipated today and will be an additional trigger of large natural avalanches.

Glide Cracks litter Turnagain Pass between 1000’ to 2500’ and have received an additional load of snow overnight. These unpredictable hazards may release without warning today and could run further than expected. This is an additional reason to avoid being near a runout zone.

Yesterday moderate Easterly ridgetop winds became strong in the afternoon with sustained speeds averaging in the 40’s mph and gusts in the 60’s mph. Over 24″ of new snow fell in the upper elevations and around 16″ along the road corridor. Temperatures have remained below freezing along Turnagain Pass (1000′) and rain/snow line is near 400′.

Today an additional 12-15″ of new snow is expected throughout the day, 1.0-1.25″ of snow water equivalent. Strong Easterly ridgetop winds will remain in the 30-40’s mph decreasing by late afternoon.  Temperatures are expected to remain just below freezing at 1000′, but rain can be expected at sea level today.

By this evening winds and precipitation will decrease and temperatures will also cool slightly.