Today the avalanche danger in the Alpine is MODERATE where triggering a slab 2-3′ thick is possible and will have high consequences. Areas of CONSIDERABLE  danger exist on the periphery of our forecast zone where shaded Northern and Western aspects will have the greatest instability. Today all aspects are suspect and it will be important to be conservative, avoid steep terrain, and practice safe travel rituals.

The avalanche danger below 2500′ is LOW, however if a slab is triggered in the Alpine it will travel into this elevation band.

A large natural avalanche was observed yesterday on the West Face of Pyramid. Although its difficult to see in this picture the estimated crown height is near 3′. 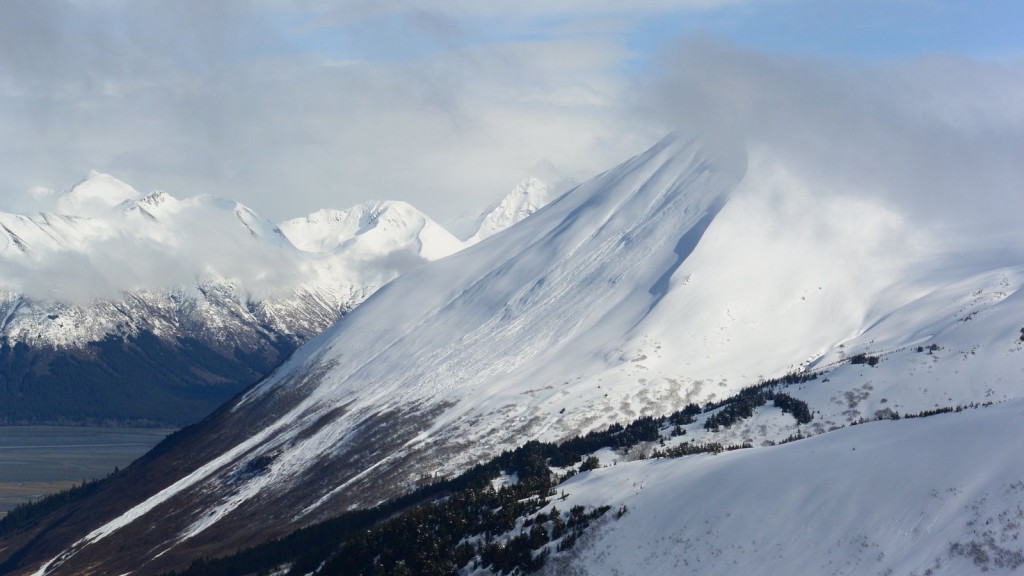 Join us tonight at Midnight Sun Brewery for the final auction night of the White Out Gallery, a fundraiser for the Alaska Avalanche School. 19 very talented and generous Alaskan artists have come together to host a month long art auction and the funds will go to the Know Before You Go youth education program and the Instructor Development Fund. The auction will close tonight at 7:30pm, but if you can’t make it to Midnight Sun  you can view the artwork and bid online HERE.

Yesterday partly sunny skies provided good windows of visibility in Turnagain Pass following a week-long storm that left 2-3’ of new snow. Beneath this snow is a mixed bag of old snow interfaces ranging from facets, buried surface hoar, wind harden snow, sun crust, and melt/freeze. Yesterday several large (D3) remotely triggered avalanches were reported, including one within our forecast zone in Seattle Creek. Several large natural avalanches were also seen in this area including the West Face of Pyramid.

Due to the spatial variation and the thickness of the slab (2-3’) obvious signs of instability like collapsing may not be present. This makes assessing the current stability complicated and snow pit data will not be representative of the entire snowpack. Steep terrain above 2500’ and Northern exposures shaded from the sun are suspect of the greatest instability. Caution should also be used on other aspects including sunny exposures.

Sadly this is not an April Fools joke. If an avalanche is triggered today the consequences will likely be high. Until this new snow has had more time to adjust to its new load, staying off of steep terrain, especially Northern aspects will be advised.

*Human Factor Note: If visibility is good today Northern aspects may have the most appeal due their protection from the sun and high quality snow. Don’t forget to watch your slope angles, travel one at time between islands of safety, and always have an escape zone.

Cornices deserve a lot of respect right now. They have grown substantially during the past week and though some of these have fallen on their own, many are looming. Warm temperatures and solar gain can increase the likelihood for failure. Minimizing time spent underneath them as well as giving them a wide berth on ridgelines is extremely important.

The photo below was taken yesterday on a Southwestern aspect on Tincan near Todd’s run.  Notice a very small slab initiated due to a recent cornice failure. 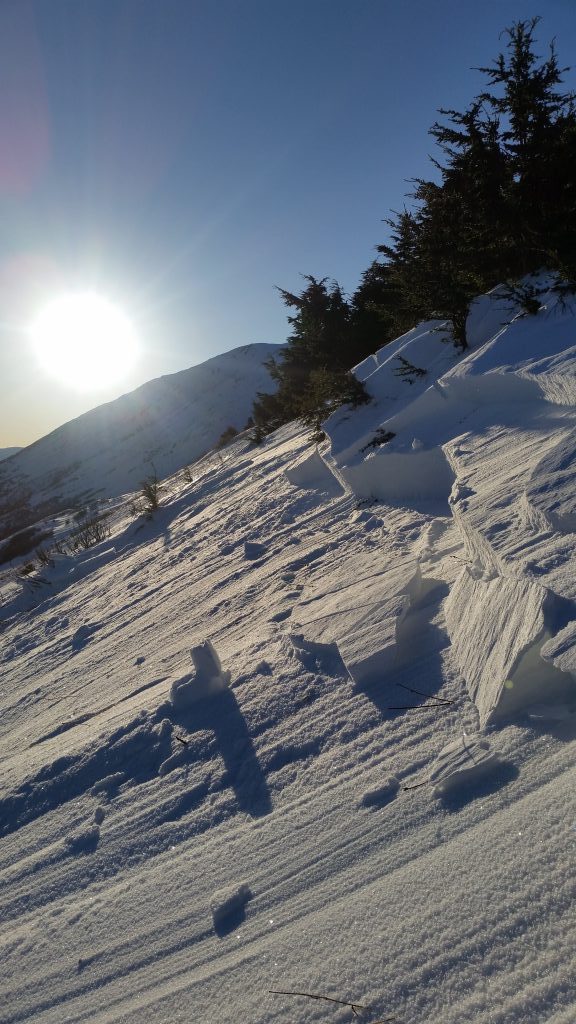 Yesterday skies were partly sunny with cloud cover obscuring visibility along ridgetops at times. Temperatures were warm, mid 40’s F near sea level and high 20’s F near ridgetops. Winds were light (5-15mph) from the Northeast along ridgetops. Isolated flurries produced a small amount of accumulation in the morning, but by mid afternoon the sun melted this new snow at lower elevations.

Today skies will be mostly cloudy, but the sun may make a brief appearance in the afternoon. Light snow showers are anticipated at higher elevations with up to an inch of accumulation. Temperatures will be similar to yesterday. Rain/snow line will be near 500′. Winds will be light to moderate out of the Northeast, 10-25mph.

Tomorrow looks to be similar; mostly cloudy with mild temperatures, and a chance of rain and snow showers. Winds will continue to be light to moderate from the Northeast.

*Wind direction data at Seattle Ridge is not accurate at this time.