Today’s avalanche danger will rise to CONSIDERABLE above 2500’, where it will become likely a person could trigger a wind slab avalanche 1-2’ deep as winds pick up throughout the day. Watch for active wind loading near ridgetops, in gullies, and below convex rollovers. Pay attention to changing conditions and increasing avalanche danger as the next storm system moves in. Avalanche danger will be MODERATE between 1000-2500′, where lower wind speeds will make fewer and smaller wind slabs, and will remain LOW below 1000′, where a lack of soft snow will make wind slab avalanches unlikely.

SUMMIT LAKE: With a thinner and weaker snowpack, there is still a small possibility of triggering an avalanche on a weak layer buried  mid-pack or near the ground.

Member Gear Giveaway: To show appreciation for current members and new members that sign up by January 15, the Friends of the CNFAIC will give away three pairs of skis in a drawing on January 16. Visit our website’s Sponsors & Members page to sign up. For as little as $20 your name will be added to the members list, and you’ll be eligible for the ski drawing! Thanks to Ski AK for donating the skis, and to all of you for supporting your local avalanche center.

Skiers triggered multiple wind slabs on test slopes in Pete’s North yesterday. While they were not deep (~6”), they did propagate fairly wide (50-150’). We can expect more of the same today. 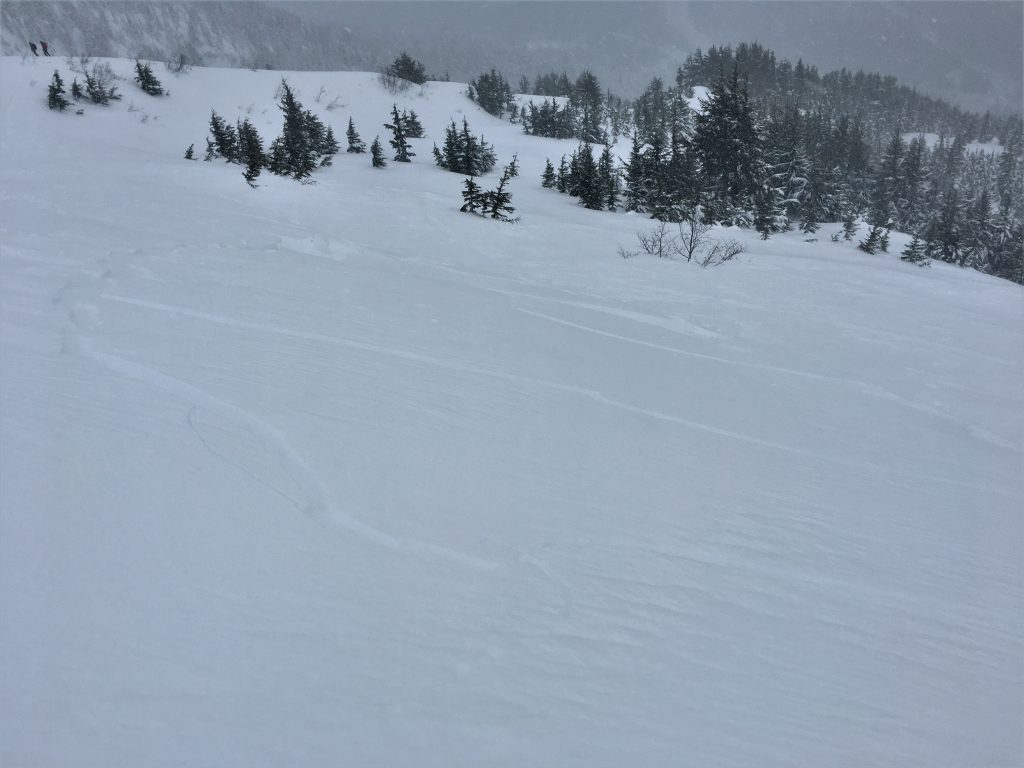 Wind slab that fractured with a ski-cut. The slope was just not quite steep enough for the slab to run. 12.26.2020

Winds are ramping up today ahead of a storm that will last through tonight and taper off tomorrow. As increasing winds through the day continue to drift snow into sensitive slabs, it will become likely that a person could trigger a wind slab avalanche 1-2’ deep. These avalanches will be the largest and most sensitive at elevations above 2500’, where wind speeds will be the highest and slopes the least protected. The most suspect slopes will be near ridges, below convex rollovers mid-slope, or in cross-loaded gullies (picture those facing the highway on Seattle Ridge, or on the steeper south-facing shots below Hippy Bowl). Be on the lookout for clear signs of decreasing stability, such as shooting cracks, collapsing, and recent avalanches. Pay attention to changing conditions as this next system moves in– with close to a foot of low-density snow accumulating over the past few days and more on the way, there is plenty of ammo for slab-building as winds pick up throughout the day. 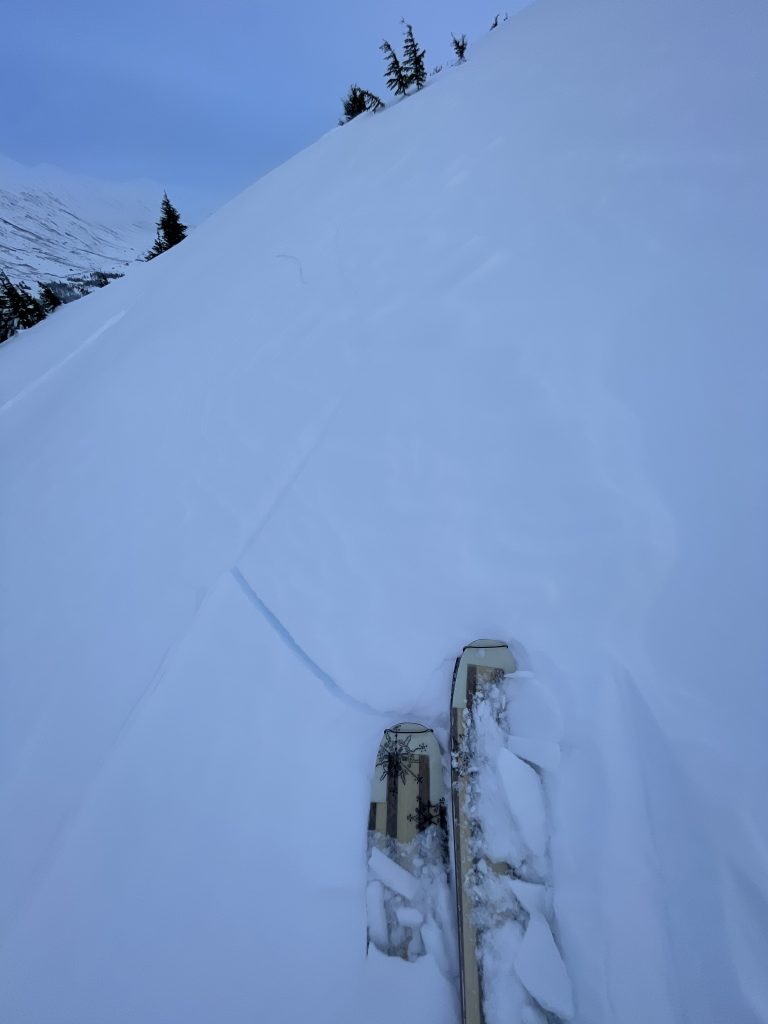 We have been tracking the crust that was formed on 12/1, after the rain level made it up to 2500’. At this point, the 12/1 crust is buried about 2-3′ deep. While we have yet to see any avalanches failing at this layer, we have noticed some faceting in the middle of the crust, which has been showing mixed results in stability tests. Yesterday, a group of skiers in Pete’s North reported a large collapse in this layer while skinning up through the trees. This observation was unexpected and it is the only red flag reported on this layer thus far. For now, we are keeping an eye on this layer as a potential problem if it continues to show signs of decreasing strength.

The Summit Lake region to the south of our forecast area has a thinner snowpack with faceted snow at the ground. This layer is gaining strength and it is becoming less and less likely to trigger an avalanche deep in the snowpack, However, we cannot entirely rule out the possibility of a person triggering a deep slab avalanche in, to quote Wendy, ‘just the wrong thin spot’. This is still a layer worth keeping in mind before trying to push into bigger terrain in the Summit Lake area.

Yesterday: Skies cleared in the afternoon after a quick round of snow left 2-4”. Winds were light to calm for most of the day, with the exception of the south end of Turnagain Pass, where easterly winds blew 15-20 mph for a few hours mid-day. Easterly ridgetop winds picked across the advisory area yesterday evening, blowing 15-20 mph with gusts to 44 mph.

Today: Our next round of snow and wind moves in this afternoon, with 2-4” snow expected by this evening and another 6-12” by tomorrow morning. Easterly winds will continue to pick up ahead of and during the storm, with ridgetop speeds expected between 20-30 mph today and 30-40 mph tonight. Temperatures are expected to rise gradually through today and tonight, reaching the low 20’s F at upper elevations and low to mid- 30’s F at lower elevations. It looks like the rain level will stay down to 500 feet.

Tomorrow: Light snowfall will continue, with another 1-2″ expected during the day. High temperatures will be in the mid-20’s to upper 30’s F, with easterly ridgetop winds blowing 20-25 mph and gusts around 30 mph.