The avalanche danger is MODERATE at elevations above 1,000′ where triggering a lingering wind slab avalanche is possible. These slabs could be fairly stubborn, composed of hard snow and in the 6-24″ range. They are likely to be found on steeper slopes, rollovers and in cross-loaded gullies. The danger is LOW below 1,000′.

SUMMIT LAKE: The snowpack in the central Kenai Mts is shallow and above 2,500′ an outlier avalanche breaking in old buried weak layers is still on our radar.

With a quiet weather day on tap today (cloudy skies, an inch of new snow and light variable winds), our main avalanche concern lies with lingering wind slabs that either formed early yesterday morning or during the high winds on Tuesday. These lingering slabs could be hidden under a skiff of new snow and found lower on the slope than expected, for example below mid-slope rollovers or in cross-loaded gullies. They are also generally on the harder side, which could allow them to not break until a person is further out on the slope. The higher in elevation one goes, and into more exposed wind affected zones, the more likely wind slabs will be lurking. Although these were fairly stubborn yesterday and should be on their way to bonding more today, it is still something to keep a close eye out for.

If visibility is good enough to get to the steeper slopes, watch for the classic wind slab signs: 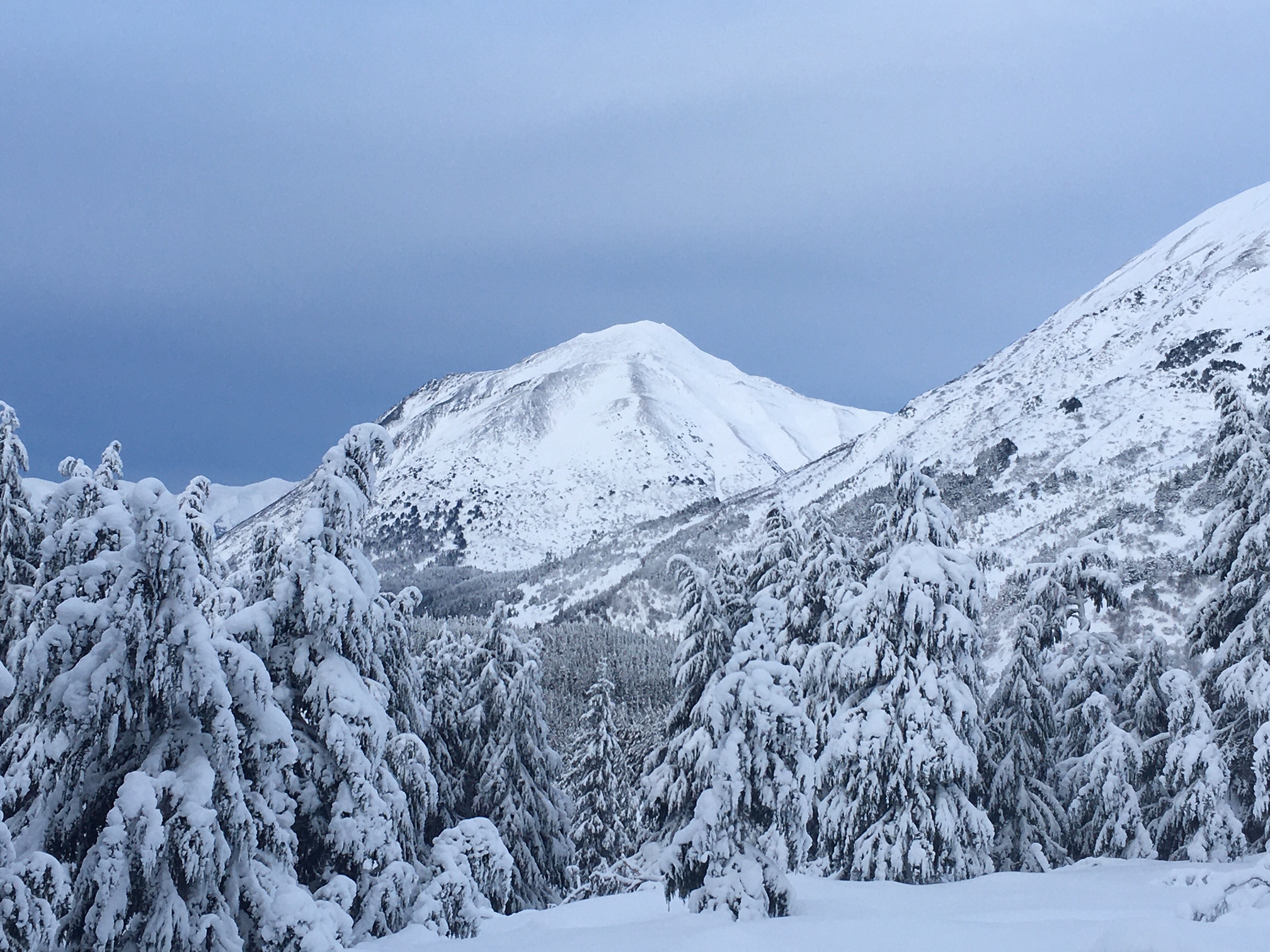 Very Chistmasy in the mountains yesterday! This photo shows significant wind effect on Peak 4940 that is across from the Johnson Pass trailhead and the furthest point of Seattle Ridge. 12.25.20

To the south of our forecast area in the Summit Lake region a much shallower snowpack exists compared with Turnagain Pass. Here there are old facets at the bottom of the snowpack and some old mid-pack weak layers. At elevations above 2500’ where there are no mid-pack crusts and the slab is composed of hard snow, these weak layers give us some pause. As the days go on and snowpit tests continue to show the layers loosing reactivity, the question is, can a dangerous avalanche be triggered if someone hits just the wrong thin spot? This is an outlier situation, but something I still have in the back of my mind.

Yesterday:  High clouds with some patches of blue sky filtered through yesterday. Ridgetop winds were easterly averaging 10-20mph with a few gusts into the 30’s. Temperatures were in the 20’s F at mid and upper elevations.

Today:  Cloudy skies with light snow showers are forecast today. Only 1-3″ of accumulation is expected – from sea level and up. Ridgetop winds are light easterly (~5mph) this morning and should swing around to the west through the day and remain in the 5-10mph range. Temperatures should stay in the 20’s F at mid and upper elevations while sea level remains near 32F

Tomorrow:  For Sunday, strong ridgetop easterly winds are forecast to develop ahead of a large low pressure system headed our way. Skies should be cloudy and precipitation associated with this front should begin Sunday night and extent through the early part of the week. This system is somewhat warm, but so far the rain/snow line looks to remain below 1,000′. Stay tuned!

*Seattle Ridge anemometer is rimed over and not reporting wind data.