The avalanche danger will be LOW today and is expected to rise to MODERATE tonight in the Alpine as new snow and wind impacts the forecast area.  Ridgetop winds are expected to increase and transport snow this afternoon, which may begin to form small fresh wind slabs in leeward terrain.  Until then, watch for lingering wind slabs and give cornices a wide berth. Although unlikely, at the high elevations above 3,000′, we are still concerned a layer of weak faceted snow near the ground could produce a larger avalanche if someone hits just the right thin spot.

An increase in wind with a few inches of snow (to sea level!) is in the forecast beginning this afternoon. Winds should start picking up around noon, but are not expected to be strong enough to transport snow till around sunset. A few snow flurries could fall today, but the heavier snowfall is expected overnight. The increase in avalanche danger will be directly related to the amount of wind and snowfall.

In the high Alpine, above 3,000′, there is still concern over a weak layer of snow sitting near the base of the snowpack. This is greater where the overall snowpack is shallower- towards the southern end of Turnagain Pass, in Summit Lake and in the Crow Pass terrain north of Girdwood.  The weak layer is buried anywhere from 1 – 6+ feet deep due to the extensive variable wind during the early to mid-Dec storm cycles. There is still a lingering concern that a person could trigger a large avalanche at the high elevations above 3,000′.

NORMAL CAUTION avalanche issues during the daylight hours, before the winds and snow arrive:

Cornice falls:  Large cornices have formed in the alpine along some ridges and gullies.  A ‘cornice crevasse’ was found yesterday, check out the photo below. Give cornices a wide berth and limit exposure under them.

Lingering and possible new wind slabs:  Watch for lingering older wind slabs that may not be well bonded with the snow underneath. As winds are predicted for this afternoon, new wind slabs could form, yet this may not materialize until after sunset.  Small wind slab failure can easily force a person off their feet down the fall line. Use caution when traveling above higher consequence terrain (such as cliff bands and rocky areas).

Loose snow sluffs:  The surface snow is loose in steep terrain.  Remain mindful when traveling above cliffs and rock bands. 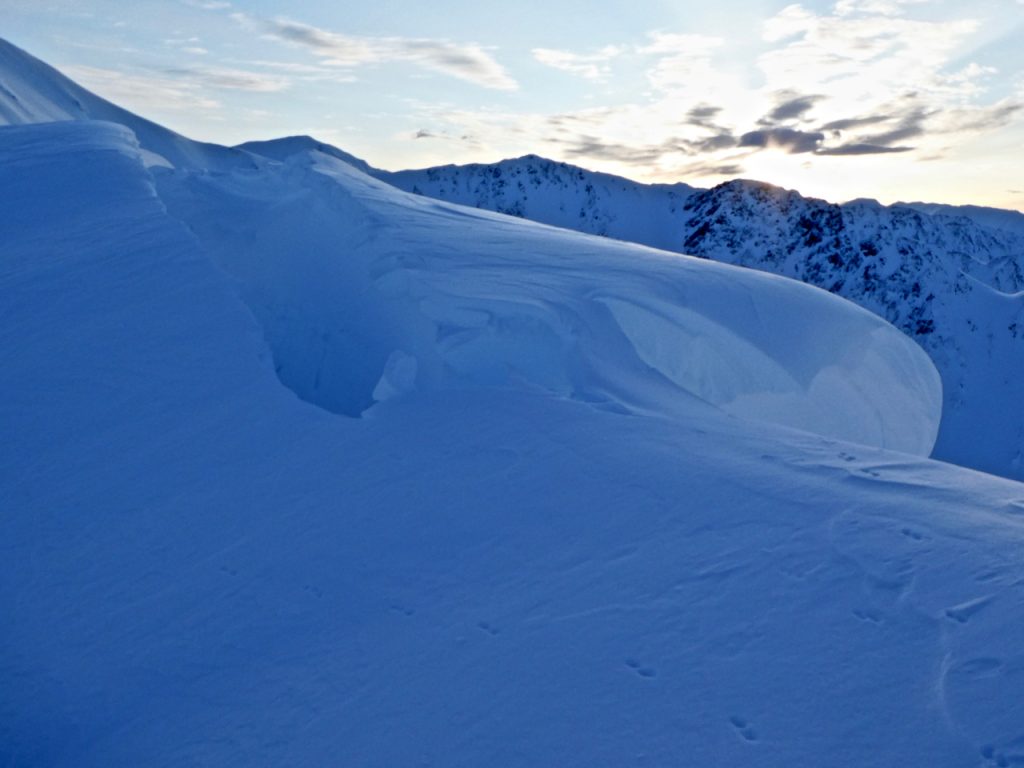 Large cornice crevasse was found and pictured by Adrian Beebee along the Magnum Ridgeline. These cracks happen when the cornice peels away from the ridge yet has not fallen or may be supported by the slope below. Size was estimated at 6′ wide and 12′ deep – yipes!!

Looking forward to a new layer of snow tonight and into the week:
Our current snow surface is now covered with feathers of surface hoar – it appears to widespread through the region. This is a notorious weak layer once it becomes buried… 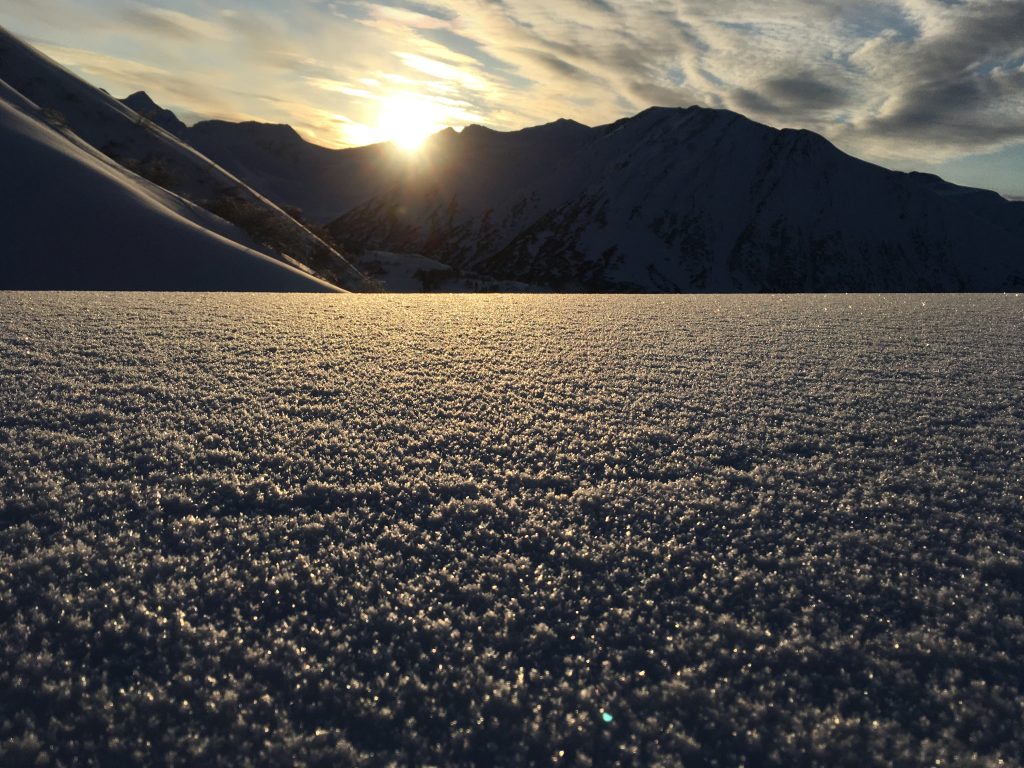 Solstice Surface Hoar:  The past few days of cold clear weather produced this crop of surface hoar on Tincan with Sunburst in the distance – possibly a future weak layer. Thank you to Troy Tempel for the photo!

Keep your eyes peeled for glide cracks in the terrain that you are traveling in. Steer clear and avoid lingering in the runout of this unpredictable hazard. There is a chance we may see some more glide cracks open and release as temperatures slowly rise.

Yesterday:  Clear to overcast skies with patchy valley fog in places. Ridgetop winds were light (5-10mph) and westerly. Temperatures were in the single digits along ridgelines and valley bottoms.

Today:  Partly cloudy to cloudy skies remain in Southcentral with intermittent snow by late this afternoon increasing to steady snow overnight.  Snow accumulation of 2-4″ at 1000′ by tomorrow morning is expected with possibly double this at the higher terrain.  Ridgetop winds are forecast to increase throughout the day from the east from 15-35mph.  Temperatures will slowly rise to the teens in valley bottoms and near 20F along ridgelines.

Tomorrow:  Light snowfall will continue through Monday and into the rest of the week. Tomorrow’s amounts look to be in the 1-4″ range. Ridgetop winds look to back off for Monday before another pulse of snow and wind head in for Christmas Eve.

*Seattle Ridge weather station is not reporting, we hope to have it back online later today.